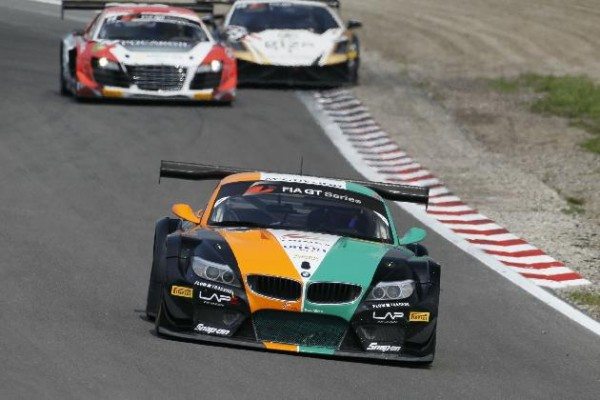 It was a welcome result for the team after a disappointing last outing at Zolder in Belgium, where Armaan’s teammate crashed the car during practice and put the team out of contention for the weekend.

“This is effectively our second race of the season and my first at this circuit, so it feels incredible to finish on the podium”, said an elated Armaan.

Prior to the weekend, the team had done a brief shakedown at Spa, along with Armaan’s new teammate Melroy Heemskerk, who had replaced Jouse who couldn’t continue due to some contractual issues with the team.

A Zandvoort native, Heemskerk had no problem getting comfortable in the car and both drivers ended up having similar pace at the Danish venue, despite Armaan’s comparative lack of experience at the circuit.

“The shakedown did us good as it enabled me to get into the groove straightway on the race weekend, as I hadn’t been in the car for over two months before that”, clarified Armaan.

After showing encouraging pace in practice sessions on Friday, the team was hoping for a good result in qualifying but was slightly left lagging on the setup front.

“We had a few things to work on but just ran out of time during qualifying, so we were hoping to make a step forward in the afternoon”, he said.

Heemskerk went on to start the race but things didn’t go to plan as a chaotic start saw the safety car being deployed on the opening lap and the Team India BMW Z4 dropped down the order at a rapid pace.

The Dane was however able to recover as the team elected to pit as late as possible in the pitstop window, allowing for laps in clear air which allowed him to claw back the time lost in initial stages.

Armaan took over around the mid-point of the one hour race and there was no looking back as he managed to carve his way up the field, setting the fastest lap for the team in the process and eventually finishing second in the Pro-Am category and a credible ninth overall.

“It was a good run even though we had some braking issues with the ABS malfunctioning towards the end, so I had to brake earlier than normal”, Armaan clarified.

“It wasn’t the best situation as we had some pressure from behind [the third-placed Lamborghini finished just over a second behind] but I was able to hold him off”, he elaborated.

Armaan will start ninth for the main race tomorrow and hopes that more progress will be on the books.

“Starting ninth tomorrow we can only go forward, so hopefully we’ll have another strong result to round off the weekend considering the amount of work everyone has put in since Zolder.” he concluded.