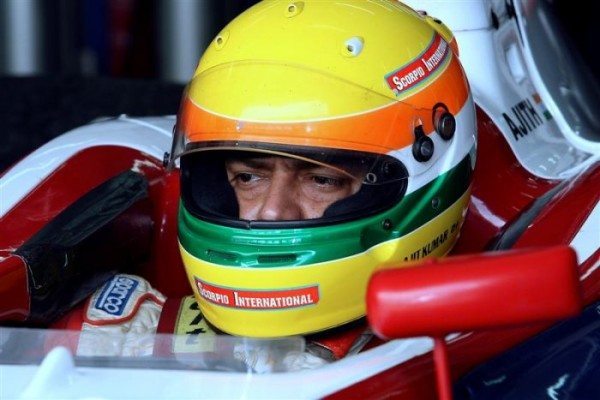 Armaan, along with teammate MatteoCressoni from Italy, will be driving the BMW Z4 GT 1 Car which puts out close to 550 horsepower. GT 1 is a prestigious Series and has participation from manufacturers like Mercedes-Benz, Mclaren, Audi, Lamborghini, Ford, Aston Martin, Porsche, Nissan and Ferrari.

Armaan has already had a taste of GT 1 last year, in a one-off race in Moscow with Team SunRed, in a Ford GT40, where he collected points in their very first outing. Post the Moscow race in 2012, discussions have been taking place over the winter, finally leading to a full one-year contract with the BMW Sports Trophy – Team India GT 1 Team.

MatteoCressoni, Armaan’s teammate has had vast experience and success in the world of GT and Endurance Racing and is classified as a ‘Gold Driver,’ while Armaan is classified as a ‘Silver Driver’ as this will be his first year in GT Racing. With the combined talents of both drivers, the Team has a strong opportunity to contest for the Pro Am Title based on the points format of the Series.

Armaan, who leaves for Belgium tonight, will get his first outing in the car on 21st March in Zolder, Belgium. The first race is on 1st April in Nogaro, France.

Commented Armaan:Moving from Formula Cars to GT Cars will be a new Challenge though I had a taste of it in Moscow last year. The GT 1 World Series looks impressive and I like the way SRO runs the whole Series. I also liked working with SunRed last year and thus have finalized a full years drive with them for this year. I do look forward to working closely with MatteoCressoni and we will work very hard to achieve the results we have set our sights on. Driving under the Team India and BMW Sports Brand will surely be exciting as for one, I was a BMW Motorsport Scholarship winner when I raced in the Formula BMW Championship and it is good to be associated with BMW again. In addition, if we can put Team India on the Podium it will be absolutely great for India and my sponsors – JK Tyre and Trimex..

Joan Orus – Team Principal and Franck Tine – Team Manager said, “I am very proud to announce this new team inside the FIA GT Series. We’ve found great people to work with in BMW Motorsport, and the Indian project with Armaan is really interesting. As a driver, his experience in single-seater will be very valuable and his skills in GT cars are not to be proved, after the race he did with the Ford GT in Moscow last season. I am sure that we will be able to get excellent results and fight for the Pro Am crown. We are all motivated and really look forward to the first race of this new series, created by Stephane Ratel and his very professional staff.”

Mr. Sanjay Sharma, Head-Motorsport, JK Tyre & Industries Limited said, “Armaan is undoubtedly one of India’s most talented racing drivers. FIA GT1 is one of the most exciting and intensely competitive racing championship series in the world right now, and we’re proud to be a part of this series with Armaan. Even though this is only his first year in the series, with his talent and experience, we’re sure Armaan will be able to do well – we wish him all the very best!”
Armaan will be competing with multiple World Rally Champion, Sebastian Loeb who will be driving in the Mclaren GT 1 Car. Brazilian F1 Drivers Ricardo Zonta and Bruno Senna are also strongly tipped to represent the Brazilian Team.