Fringe car-maker Ariel Moto from the United Kingdom has announced the unveiling of a new motorcycle from their stables. This new motorcycle will be unveiled at the Goodwood Festival of Speed, to be held in Southern England from 26-29 June.

Infact, we had reported about this upcoming motorcycle a few days back when the plans for this bike were made public. As the dates start inching closer, more and more details flow in about the Ariel motorcycle.

Ariel Moto’s claim-to-fame is the Atom, a fiendish looking car. It threatens to test the resilience of the driver by exposing him to the elements, as well as sheer G-Force! The Atom has the option of two power plants : a 350 bhp, 2.0 Litre Honda I-VTEC, or a Limited Edition 500 bhp V8. The USP of the car is the ridiculously low weight of the car, which gifts it an immense power-to-weight ratio.

Going by the backdrop, it appears that the motorcycle from Ariel too will be something in the same league.

Official sources now state that the new Ariel motorcycle will be powered by a Honda VFR1200 engine. This liquid-cooled, V4 powerplant is capable of churning out 170 hp at 10,000 rpm. This is also accompanied by the earth-shattering torque of 129 Nm at 8,750 rpm. This also suggests that the Ariel motorcycle will possess Honda’s proprietary Dual Clutch Transmission system. It uses two clutches, one for the even-numbered gear shifts and the other performing the odd-numbered gear shifts. Riders preferring more control also have the option of shifting up and down manually by using the paddle shifters in the form of buttons. 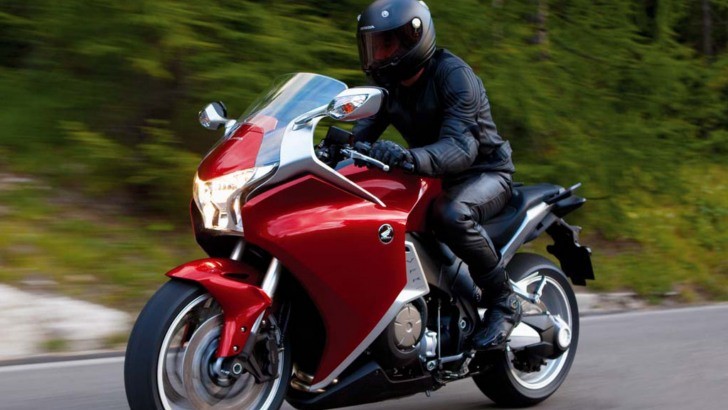 However, it wasn’t clear if the new Ariel motorcycle would use the platform of the VFR1200. Director Simon Saunders seemed enthusiastic about the project, and stated that the Ariel motorcycle will be customised according to individual preferences. This does leave the word hanging, though. We feel Ariel might just bolt on some custom kits to the VFR1200 frame, and start selling them as new bikes.

Or will they forge custom frames, too?? No matter what, the idea of this new bike itself sounds a bit eccentric to us. We are just on the lookout for the Power-to-Weight ratio of the bike.