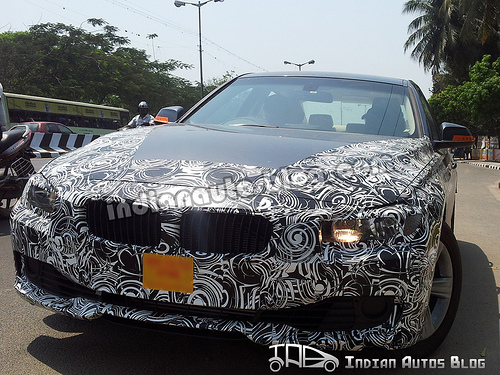 We reported in detail when BMW first unveiled the latest generation of its very popular 3 series sedan. We knew that sooner or later, this vehicle will make its Indian debut and now, we think that it might happen sooner than later. A few months back, the good folks at indianautosblog spotted the latest gen 3 Series in Chennai and now it has emerged that BMW India have been busy dispatching demo models of the new 3 series to its dealerships. The car that was caught down south was seen with heavy camouflaging and this surely means that BMW wanted to take no chances of letting the road users know how the car would look like on our roads. Well, until of course the German automaker starts providing prospective customes in India with the test drive of the new car.

The new 3 Series has been codenamed as F30 and should be here in India by the end of this month. The bread and butter model of the BMW comes to us via CKD route and is assembled at Chennai facility of the German car maker. The latest 3 is wider by 37 mm on front and by 47mm at rear, is longer by 93mm and the wheelbase has grown by 50mm. Rear passengers have 18 mm of more legroom on offer than the outgoing 3 and has 15 mm of additional knee room & 8 mm of extra headroom. The new car is lighter by 40kg. The 2012 BMW 3 Series will be sold in India in four variants-– 318d, 320d, 320i and 328i.

The 328i and 320d should make it to our market first. The 320d uses a 2 litre 4 pot oil burner and offers a good mix of fuel economy and performance. While there is no Corporate Edition of this car on sale internationally, we are quite sure that BMW India will soon start working on the CEs. It may be noted that Audi India managed to overtake BMW in Indian market in last month’s car sales and the guys at the BMW, which had been having a dream run of sorts until very recently, must be pretty much worried about the onslaught from their arch rival. It will be interesting to see how well BMW markets the new car to re-gain the sales it has been losing to Audi.