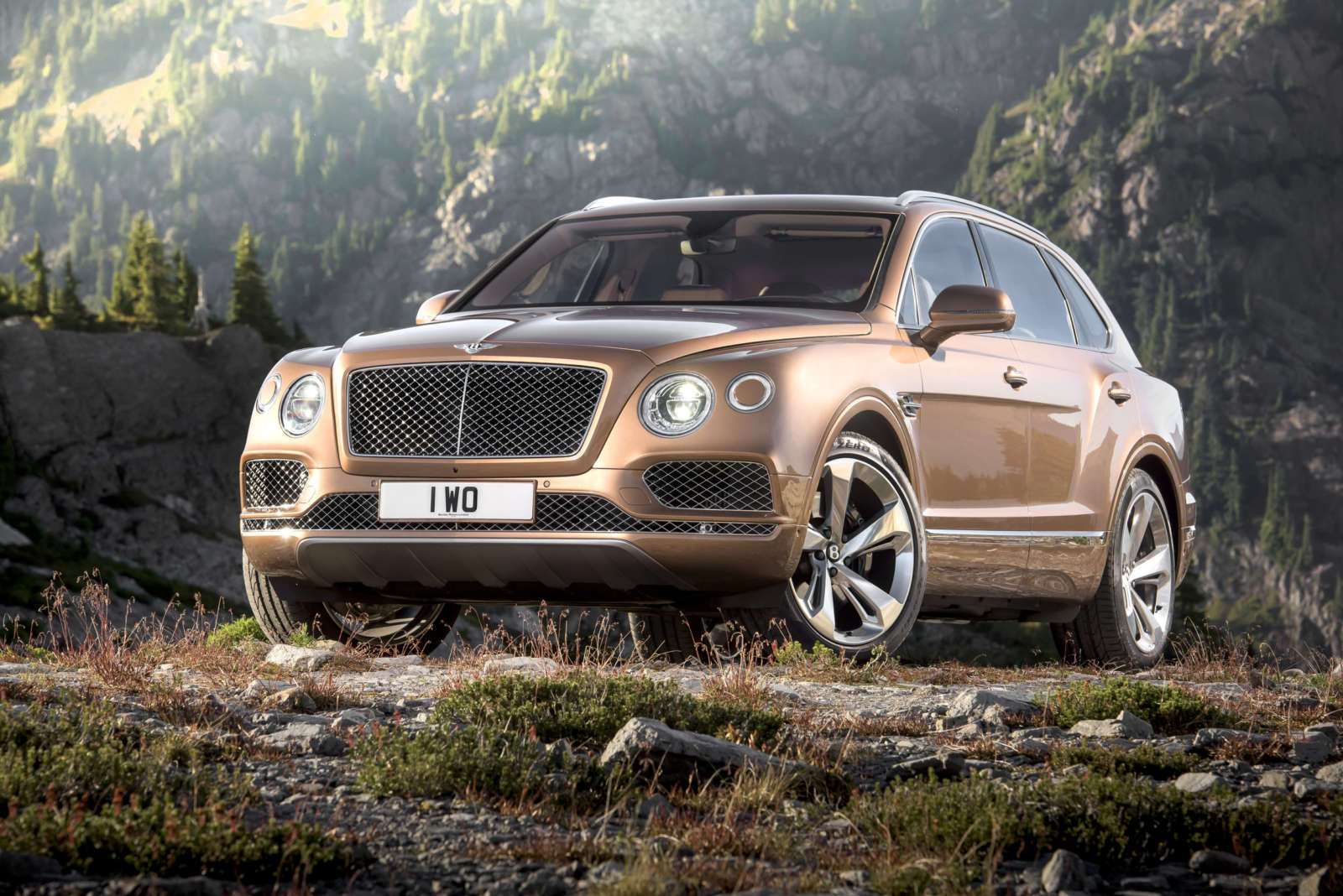 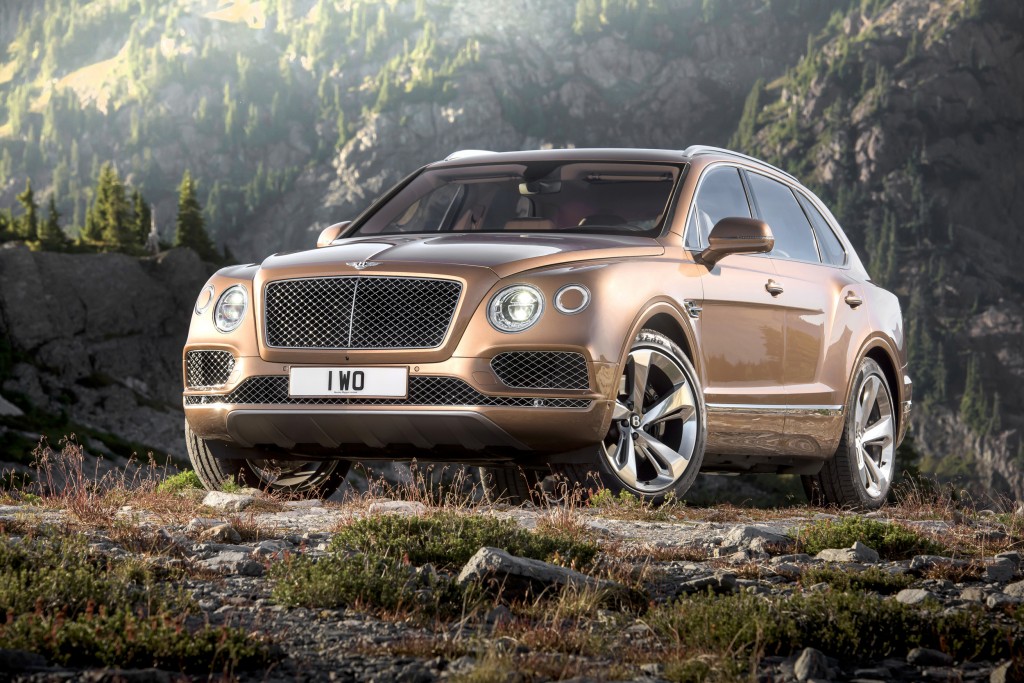 With a top speed of 301 km/h, the new, 2017 Bentley Bentayga is the world’s fastest production SUV, and probably one of the most luxurious as well. Wait, Bentley says its the most powerful as well, with 600 bhp from its all-new W12 engine.

Bentley’s first ever SUV will make its full public debut at the IAA Frankfurt Show from 15 to 27 September. Customer deliveries commence in early 2016. 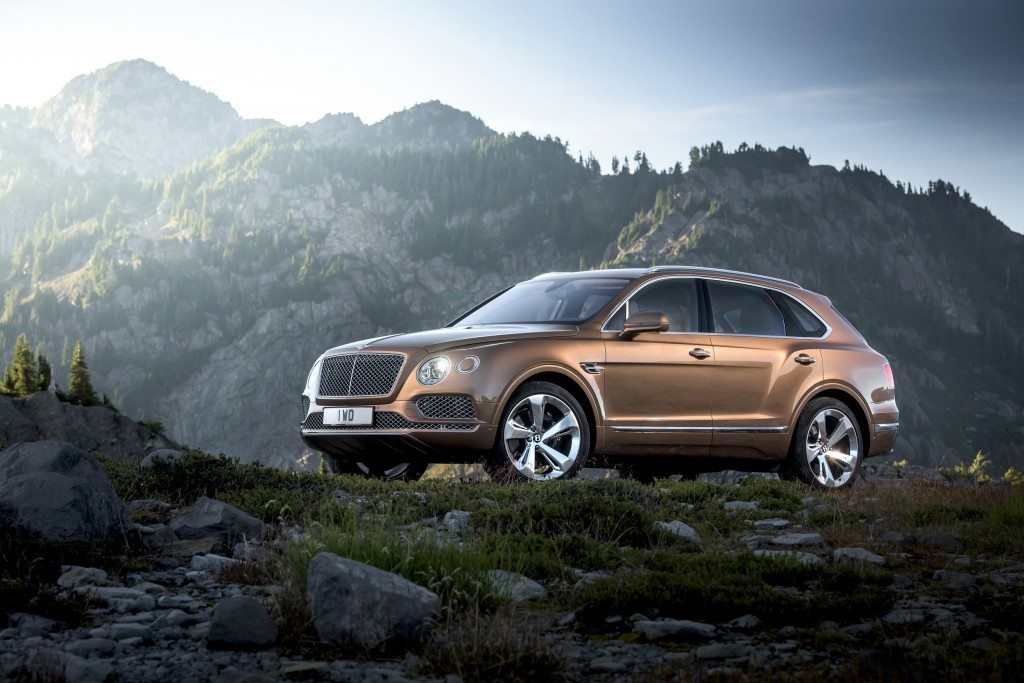 A high-riding Bentley with a wagon-like profile will always be taken with a pinch of salt, but the Bentayga has been rather well resolved; and it better be, because it’s going to be Bentley’s new bread and butter model.  Bentley says that intense usage of lightweight aluminium in the Bentayga’s construction has enabled a total weight saving of 236kg compared to a traditional body construction.

Crafted out of aluminium, the Bentayga’s smooth bodywork tautened in places, notably on the sides. The sharp character line, called the Bentley power line, emanates from the B-shaped wing vents, creates a crease and ends in the muscled up haunches. According to Bentley, the Bentayga’s side panel is the largest single-piece aluminium pressing in the automotive world. 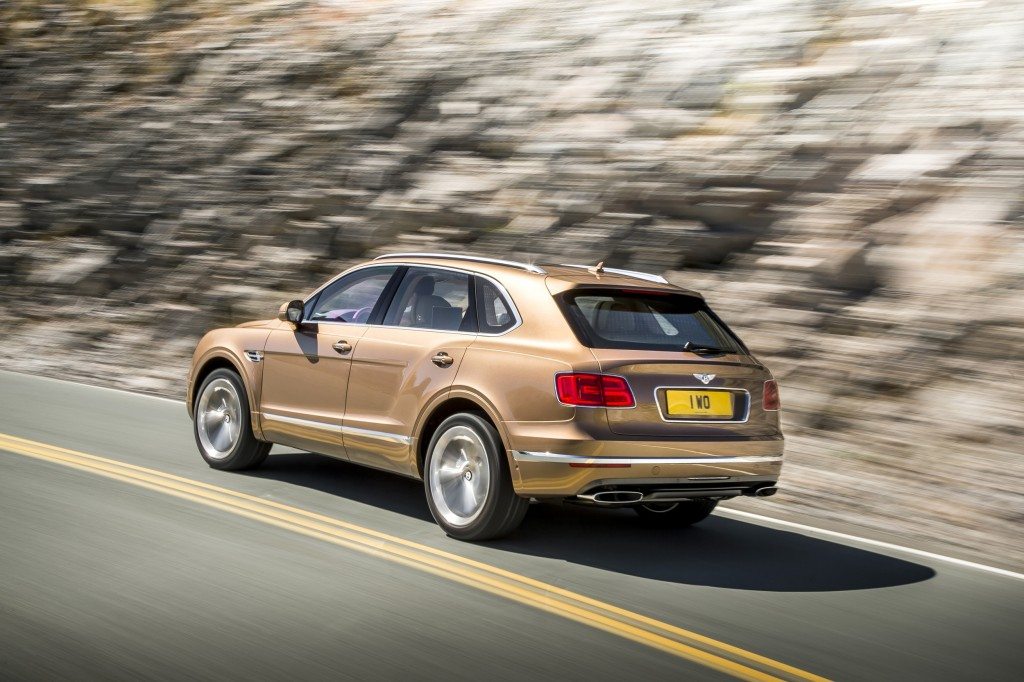 The Bentley DNA makes its presence felt throughout, with the large matrix grille up front, flanked by four “floating” all-LED headlamps, which are hosted  within the seamless superformed aluminium front fenders.  The headlamp washers are discreetly contained within the outer lamp’s body-coloured centre.

Being a SUV with  go-anywhere abilities, the Bentayga comes with a skid plate integrated into the lower section of the front bumper, just below the floating wing motif. The rear is highlighted by the segmented tail lights, with a new ‘B’-shaped illumination graphic that affords the Bentayga with its own disticntive night-time signature. 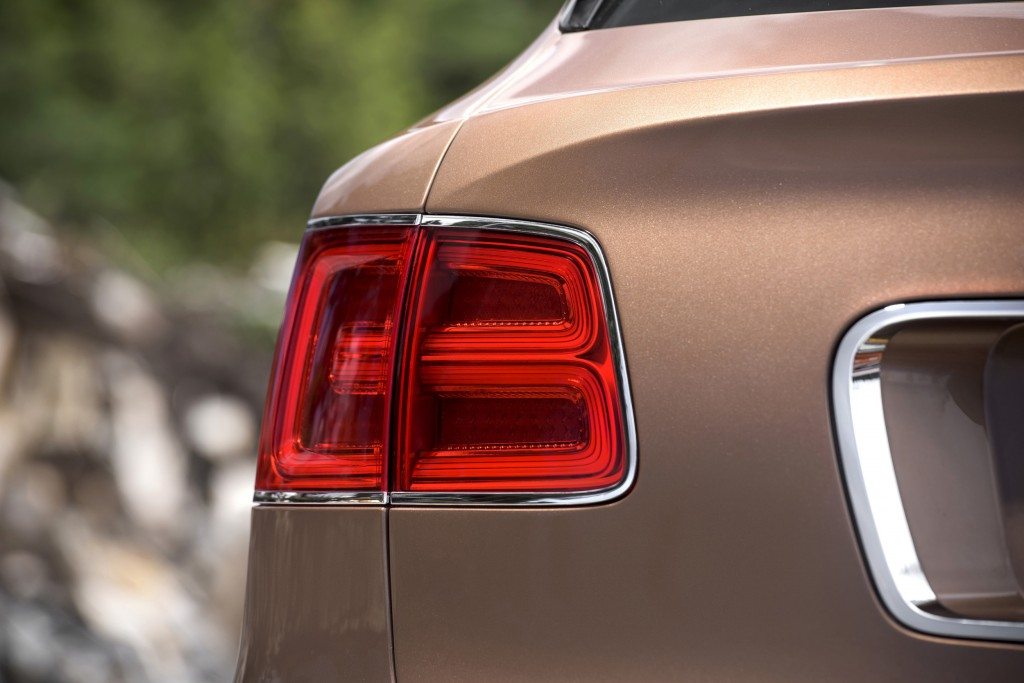 As standard, the Bentayga comes with a panoramic glass roof. Making up almost 60 per cent of the total roof surface, the 1.35m2 glass feature is split into two panes. The front panel tilts and slides, and the whole glass surface can be obscured via an electric, full-length roller blind.

Either side of the glass roof are aluminium roof rails that combine two different finishes – a high-gloss black base and bright anodised top section. A new range of bespoke Bentayga alloy wheels are available, ranging in size from 20″ to 22″. The standard palette alone comprises 17 exterior paint colours, with up to 90 hues available in the extended, Mulliner range. 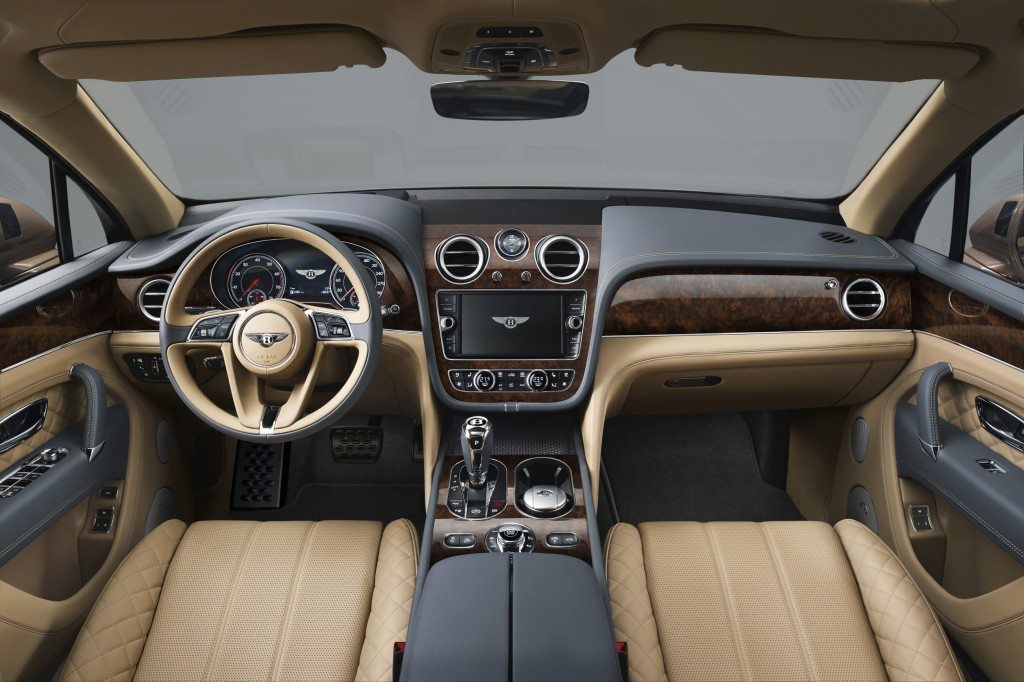 The sumptuous interiors are trimmed  with hand-crafted wood and leather throughout. The new dashboard reflects Bentley’s interior design DNA from the Continental and Flying Spur models; compared to which, the Bentayga’s centre console has a sunken feeling, with the bulls-eye vents popping out of it.

The cabin is put together with 15 hand-selected veneers, while polished and handcrafted metal elements adorn the dashboard, centre console and doors. The air vents, drive mode selector and gear knob benefit from trademark Bentley knurling.

The font seats are individually handcrafted in Crewe and feature 22-way adjustment including adjustable cushion and backrest bolsters, while also imbibing a six-programme massage system, seat heating and ventilation. 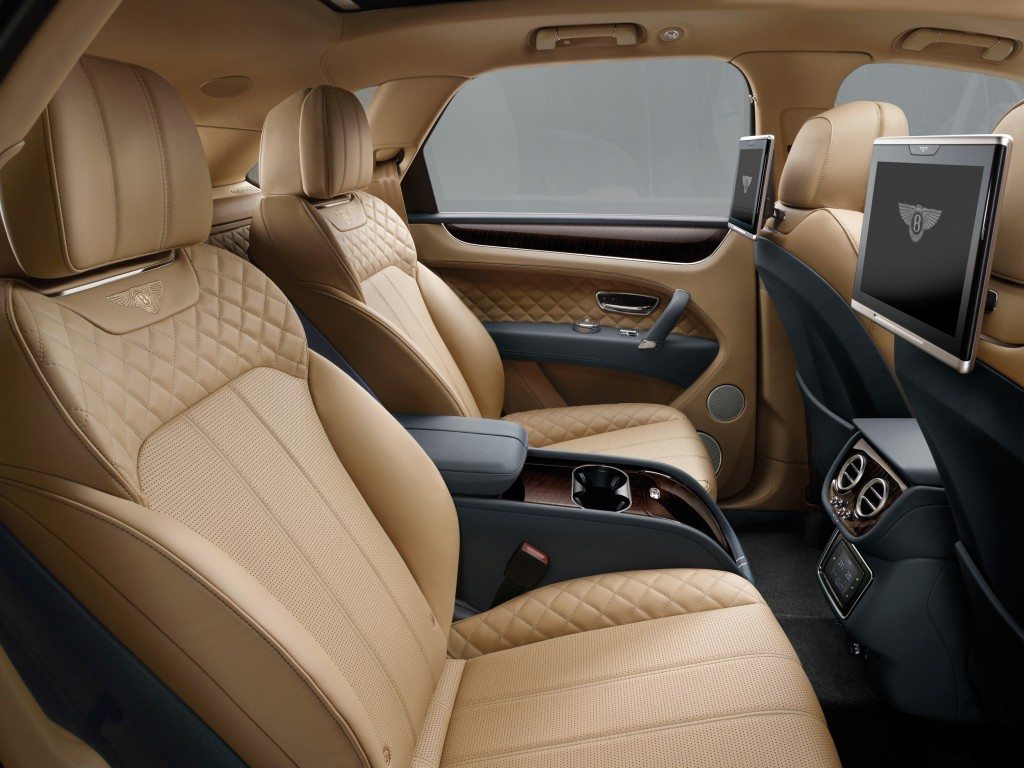 The Bentayga can be had in either four- or five-seat configuration, with all of the leather seats  available with contrast stitching and a quilted diamond design applied to the ‘shoulders’ and bolsters, echoing the design of a finely tailored British hunting jacket.

In four-seat configuration, the two individual rear seats adjust in 18 different ways and include massage and ventilation functions as well as footrests. The veneered rear console hides additional functionality such as cup holders, generous storage areas and USB charging sockets.

The bull hides are individually selected by specialists, all of which are sourced from cool European climates, naturally tanned and never over-printed. Customers have the choice of 15 colours, in three duo-tone and one single mono-tone colour split. There are also 15 carpet options, along with seven different hand-crafted veneers. 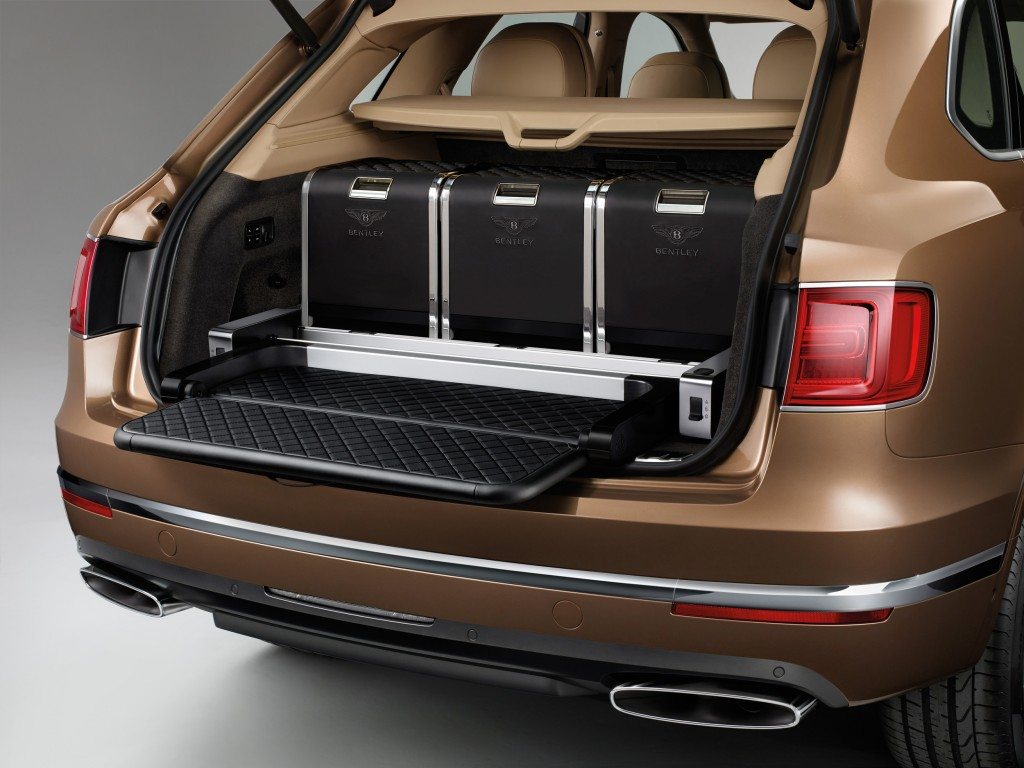 The fixed back divides the interior cabin from the boot. Also trimmed in the signature diamond quilting and including a ski-hatch, it creates an enclosed rear cabin space. A full-length panoramic sunroof with acoustic interlays allows ample natural sunlight inside.

The tailgate is hands-free, and reveals the optional folding event seat, which is ideal for those wishing to stop for a moment and soak in the environs when on an outdoorsy adventure. The leather-trimmed folding seat matches exactly the style of the cabin seats and integrates seamlessly into the rear of the car. 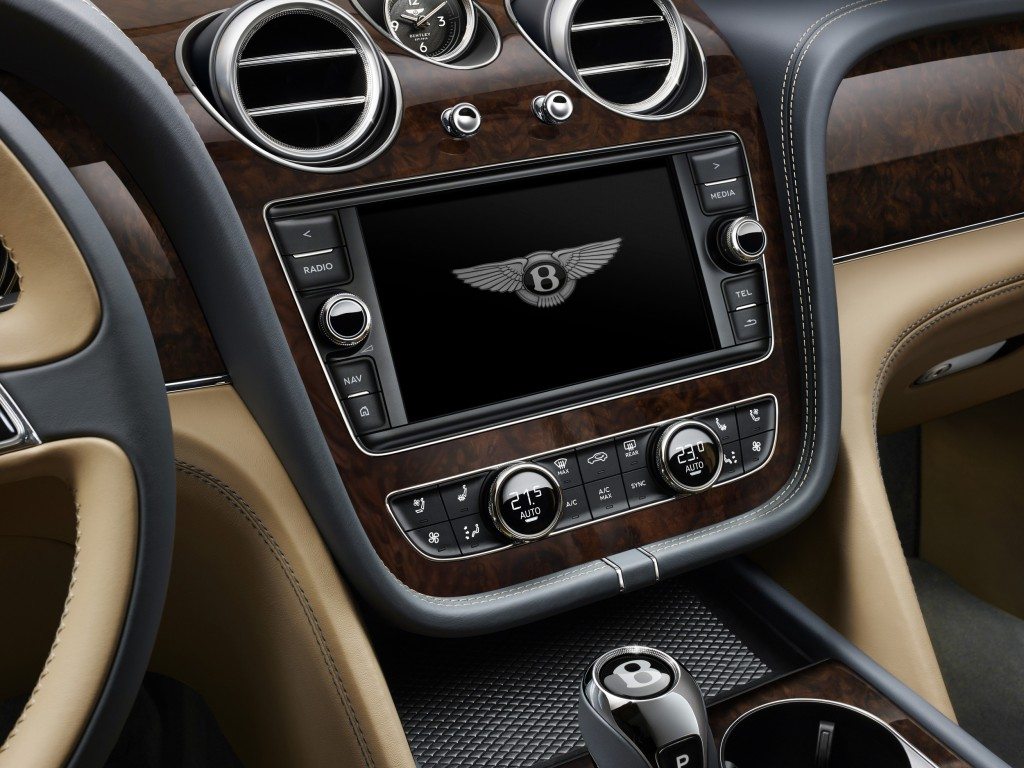 The Bentayga’s all-new, 8″ touch screen infotainment system includes navigation, a 60GB hard drive, and a choice of up to 30 languages. Rear seat passengers benefit from the introduction of the Bentley Entertainment Tablet – a removable 10.2″ Android device with 4G, WiFi and Bluetooth for effortless, high-speed on-board connectivity.

Customers can choose between three different sound systems for the Bentayga: Bentley Standard Audio, Bentley Signature Audio and Naim for Bentley Premium Audio. The latter is the most powerful system in the segment, with 1,950 watts, a network of 18 speakers and super-tweeters for unrivalled recreation of the highest audio frequencies. 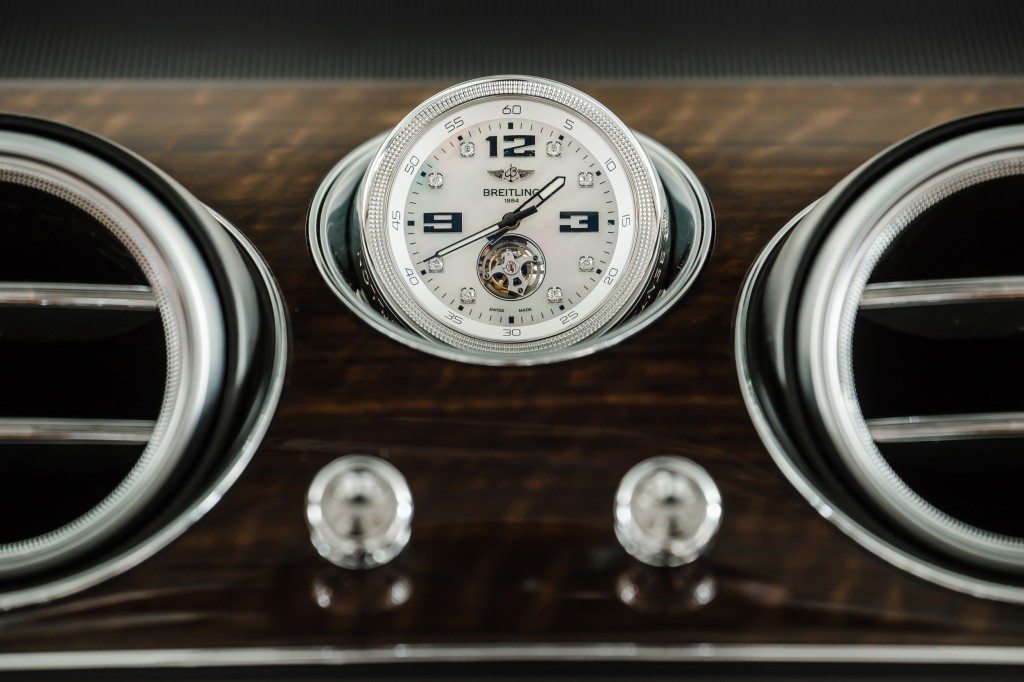 At launch, the Bentayga is available with an integrated Mulliner Hamper Set, complete with refrigerator, bespoke fine Linley china cutlery, crockery and crystal glass, and storage area for dry goods. A bespoke mechanical Mulliner Tourbillon by Breitling clock machined in solid gold can also be specified, which is automatically wound periodically by a dedicated high-precision winding mechanism within the car. 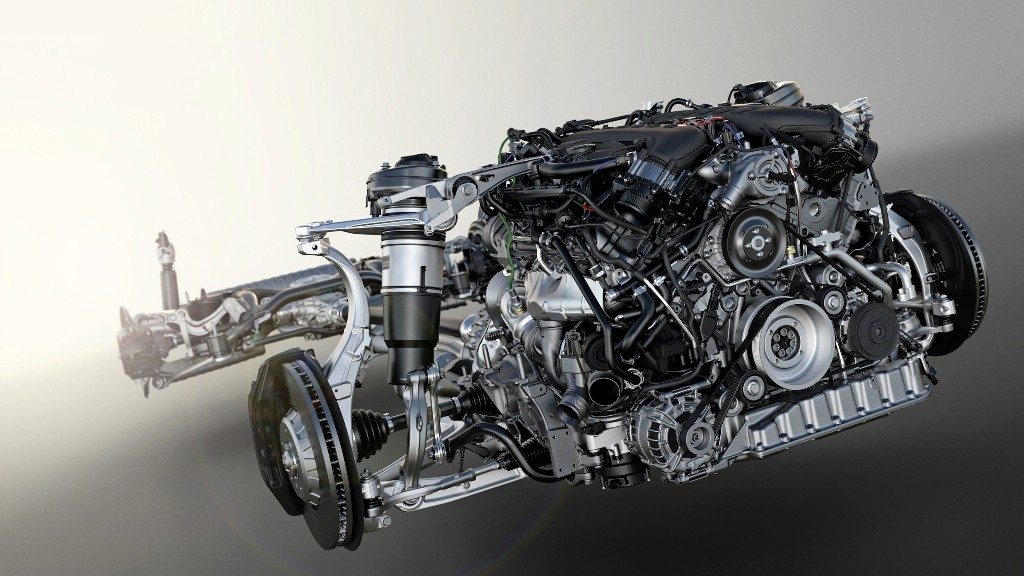 The engine is mated to an eight-speed automatic gearbox, while both the transmission and four-wheel-drive system has been strengthened to handle the demands and high torque levels of off-road driving. The new W12 sees a 11.9% efficiency improvement compared to the existing powertrain, courtesy  Bentley’s Variable Displacement system, which shuts down half of the engine under defined conditions. The Bentayga will also be available as diesel and hybrid variants in the future. 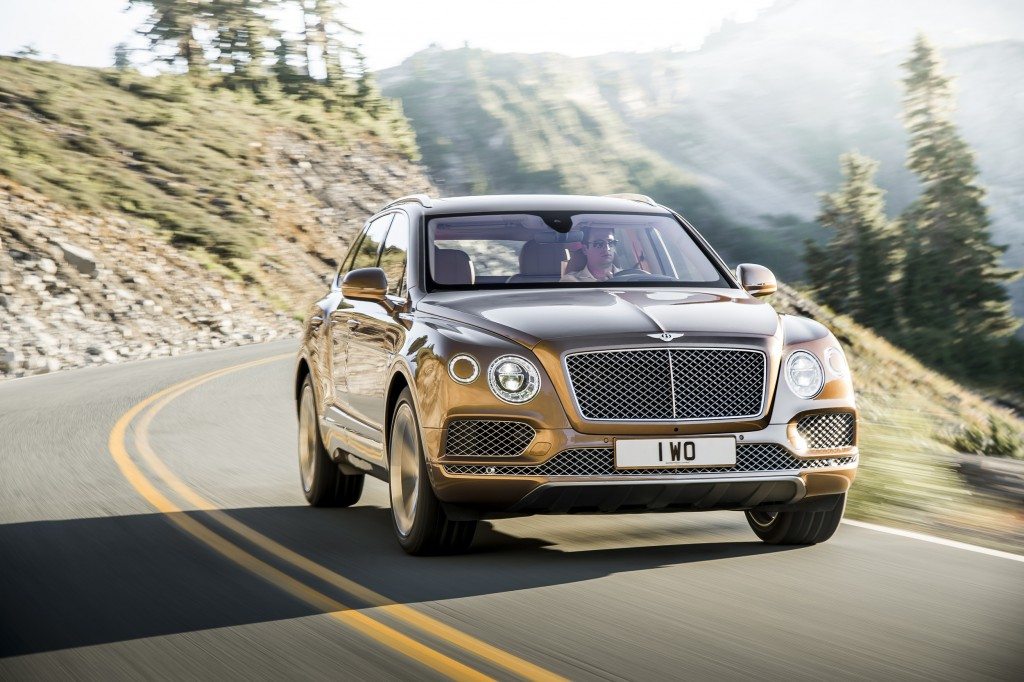 Wolfgang Dürheimer, chairman and chief executive of Bentley Motors, comments: “The Bentayga is truly the Bentley of SUVs. It redefines luxury in the SUV sector and offers a genuine Bentley experience in any environment, thanks to a combination of unparalleled attention to detail, go-anywhere ability and cutting-edge technology. With this extraordinary car we are looking forward to an exciting period of strong growth and sales success for Bentley. The Bentayga is the next step in our brand’s bold future.”

The Bentayga’s range of on- and off-road drive settings include Bentley’s Drive Dynamics Mode and optional Responsive Off-Road Setting, which  allows the well-heeled yet venturesome customer to select the appropriate vehicle settings for a wide range of off-road surfaces, while the Driver Information Panel displays information on pitch, roll, wheel articulation, steering angle, compass bearing and altitude. 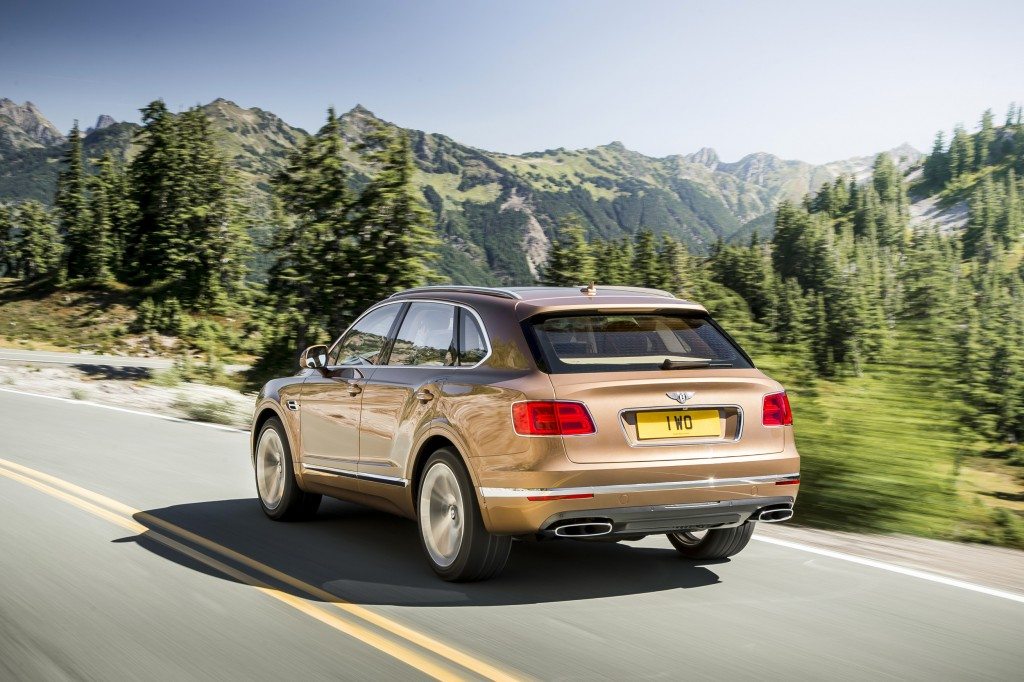 Other driver aids available on the Bentayga comprise of Traffic Sign Recognition, which detects a wide variety of traffic signs and displays information to the driver; Rear Crossing Traffic Warning, which uses radar technology to detect crossing traffic when reversing out of a parking space; and Top View, a system which uses four cameras to display an overall picture of the vehicle’s surroundings. 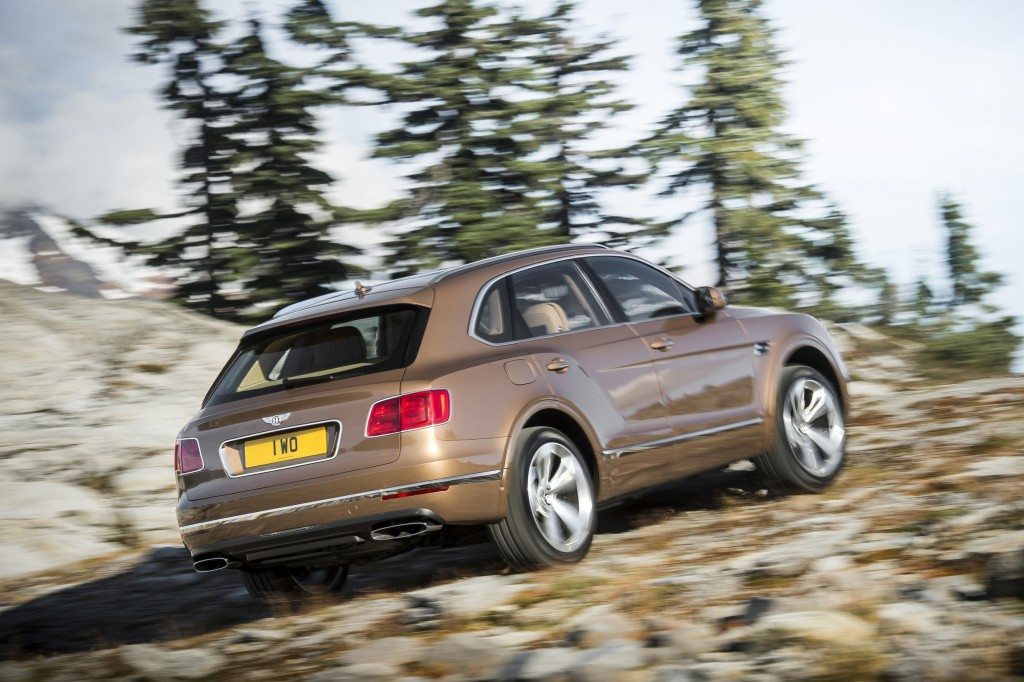 The Bentayga is also available with Park Assist – a system that detects suitable parking spaces (both parallel and perpendicular) before autonomous steering takes over to support parking manoeuvres, even in narrow and tricky spaces, while other systems include Electronic Night Vision, which uses infra-red technology to identify potential obstacles ahead, and a Head-Up Display. 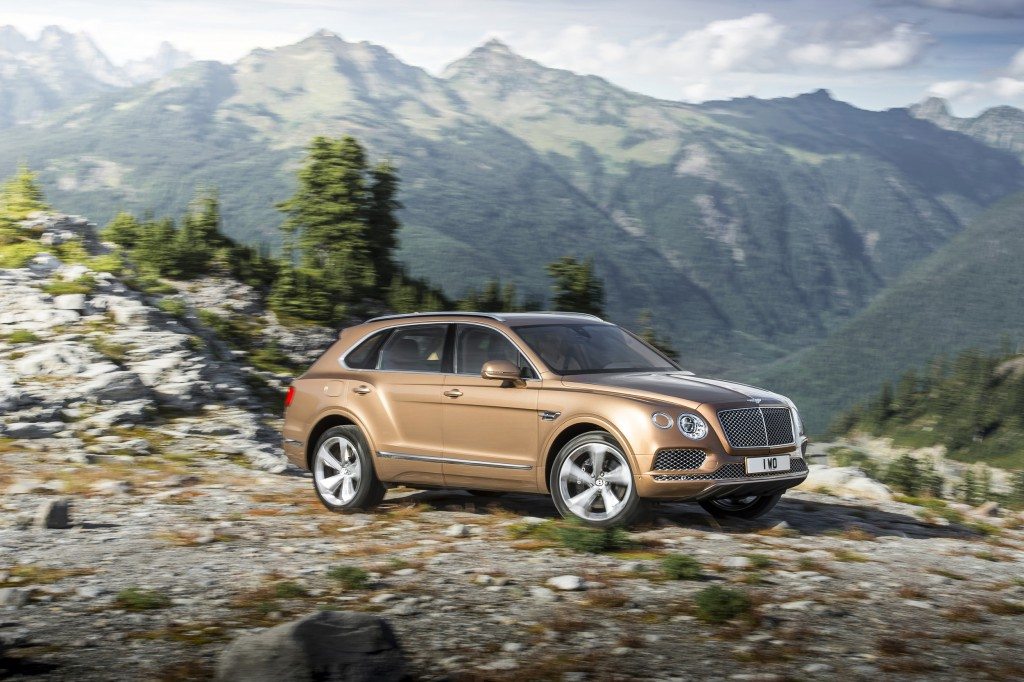 Bentley says that the development programme for the Bentayga has been the most exhaustive in the Bentley brand’s history, ranging across five continents, along with  over 400 laps of the famous Nürburgring Nordschleife circuit.

Other technical appointments include Electric Power-Assisted Steering (EPAS), Electronic Stability Control (ESC), in addition to multi-mode Traction Control (TCS) and Hill Descent Control (HDC). As with all Bentleys, the Bentayga comes with multi-mode air suspension. The Bentayga driver has four different modes to choose from: High 2, High 1, Normal and Low. High 2, for example, can be manually selected when tackling more severe off-road surfaces. Customers can also lower the rear suspension via a switch in the boot, to ease loading and trailer hitching.