Stare hard. This is how the next-generation, 2015 Audi R8 would look, when it goes on sale post it global premiere at the 2015 Geneva Motor Show in March. Considering the original R8 was nothing sort of a design phenomenon, styling on the 2015 R8 will be purely evolutionary, as this sole leaked official image shows. The iconic side blades from the original R8 have now become two-piece units, while optional LED headlamps jewel up the squatter front fascia. A fixed rear spoiler is also visible. The new car will also be wider, lighter, yet, shorter than the outgoing R8.

The V-10 engine destined for the new R8 is the same 5.2-liter unit found in Lamborghini’s Huracán, a car that shares its platform with the new R8 albeit has a smaller footprint and is a bit lighter. In the new R8, the V10 will develop 532 bhp @ 8000 rpm, coupled with 539 Nm of torque @ 6500 rpm. Powering the more powerful R8 Plus, the same engine will make 601 bhp @ 8150 rpm and 559 Nm of torque @ 6500 rpm. If that is the case, the standard V10 variant makes 15 bhp more, while the Plus variant makes 59 bhp more than the outgoing car. A V-8 option will be added later, along with an all-electric e-tron variant and possibly a new plug-in hybrid variant. 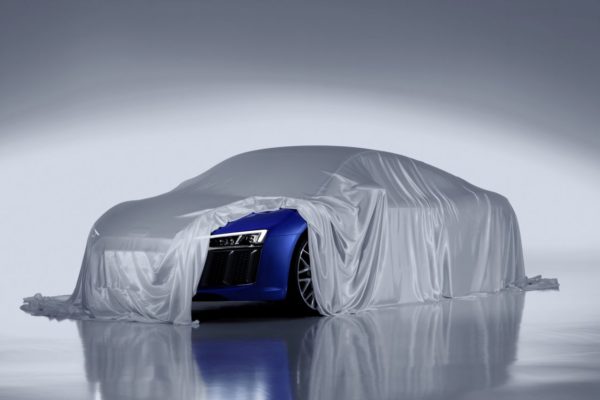 The second generation R8 V10, not only produces more power (in the ‘Plus’ guise) than the previous iteration, but also comes with a more advanced Quattro all-wheel drive system. The new system can channel/distribute all of its 600+ horses from the vicious 5.2-litre V10, to any of the two axles of the car. This means that the 2015 R8 V10, can either become a rear-wheel, or front-wheel drive car, if the situation demands. This ensures optimum traction during all times and makes sure that you, the driver, don’t ever veer off the tarmac when you poke the R8 with a stick. Though this is an Audi, the R8 V10 can, in the right hands, become a hooligan.

Audi have also revised the 7-speed dual clutch transmission to make gear changes faster, more smoother. With seven different driving modes to choose from, the new Audi R8 should do the 0 – 100 dash in 3.2 seconds, going on to register a top speed of 330 kph, which is 0.3 seconds quicker and 13 kph higher than the car it replaces. The new R8 will also be more efficient, courtesy of an auto start/ stop system and a coasting function that idles the engine on extended periods of trailing throttle.