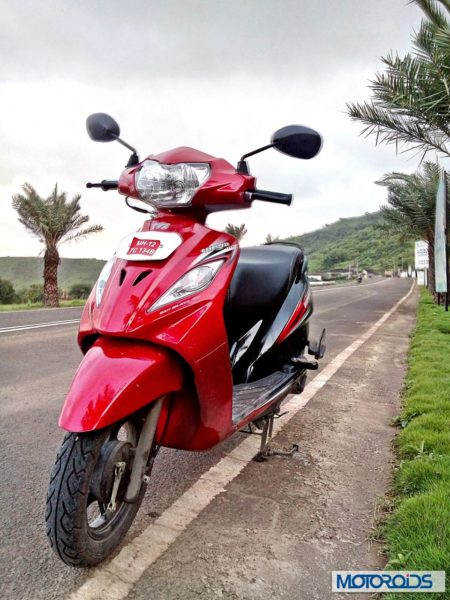 TVS have come out with a new, refreshed variant of its successful Wego scooter- the Wego 110. This one is pegged as a premium commuter and promises to come across as a more appealing and youthful product as compared to the old Wego. Further accrediting its capabilities is the fact that it has already lapped up the coveted India Design Mark award (I Mark) from the India Design Council.

The Wego 110 is one pleasing looker. The overall design remains mostly unchanged from the erstwhile Wego, apart from a few nifty details which include: 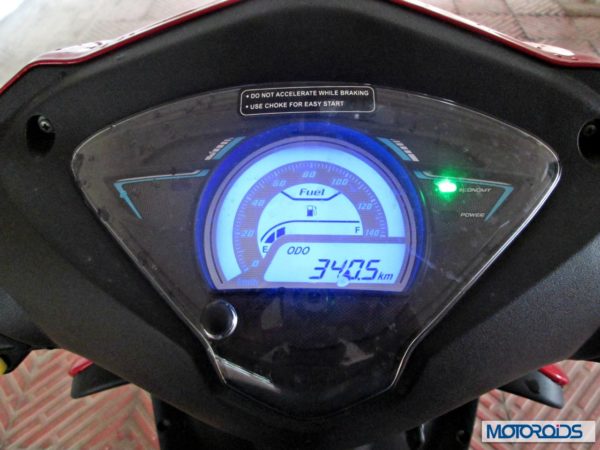 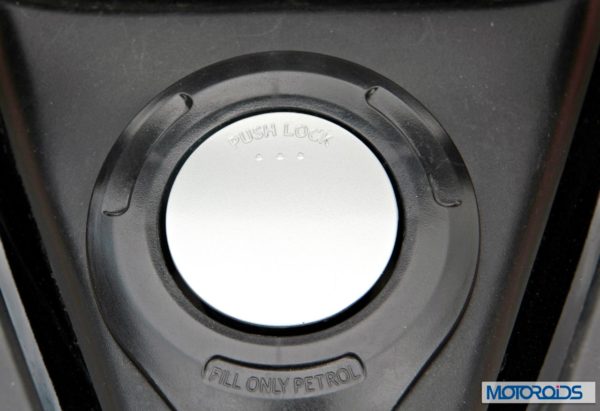 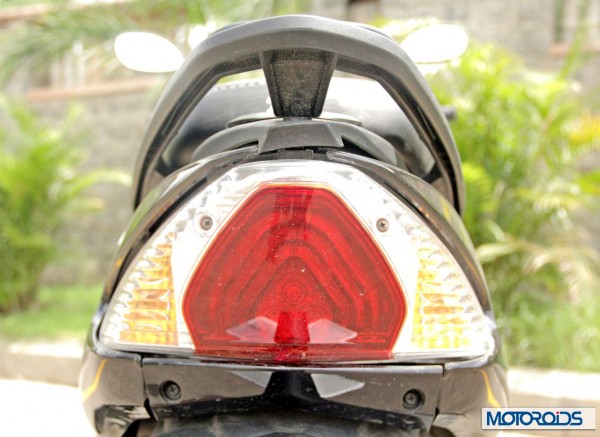 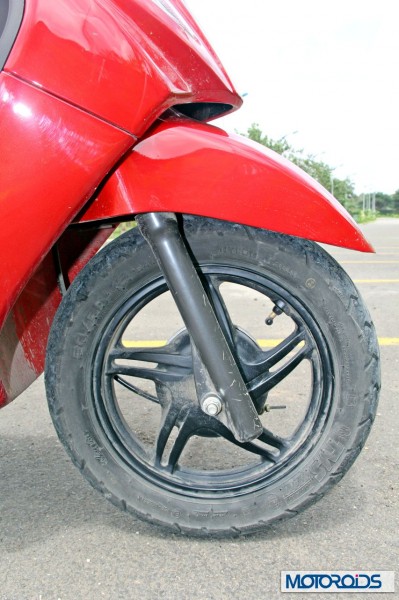 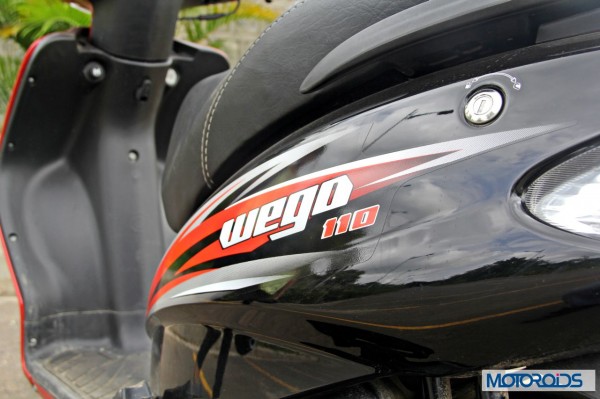 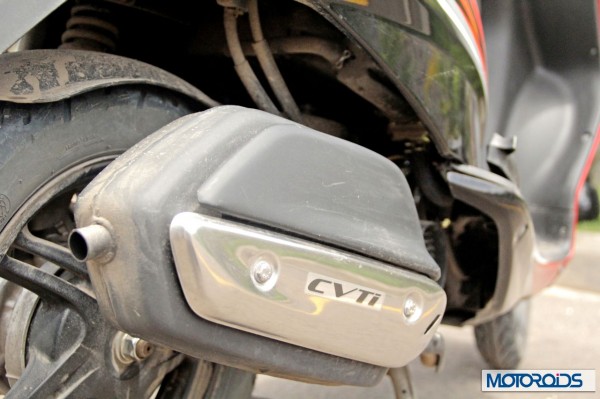 >>Next page for Styling, Ride, Handling and Braking>> 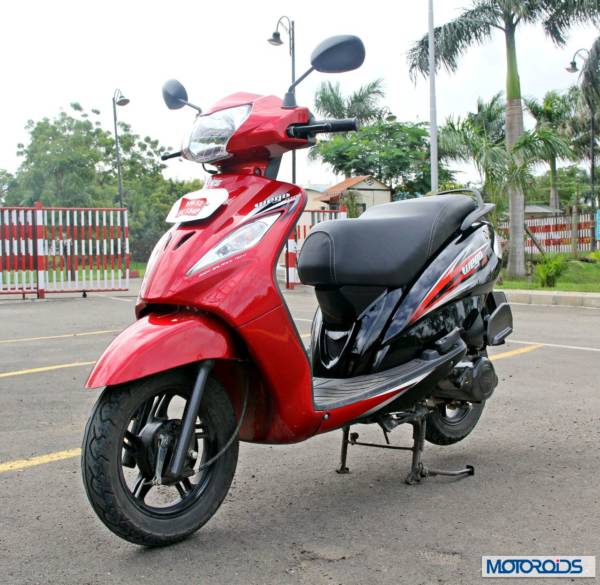 With the 110, TVS has tried to give the Wego a more premium, upmarket appeal, because let’s face it- the old Wego didn’t cut the mustard when it came to dazzling looks. This time however, it kind of works, although the visual changes merely include blacked out wheels and suspension pieces, a new color palette and that meaty looking exhaust from the Jupiter. 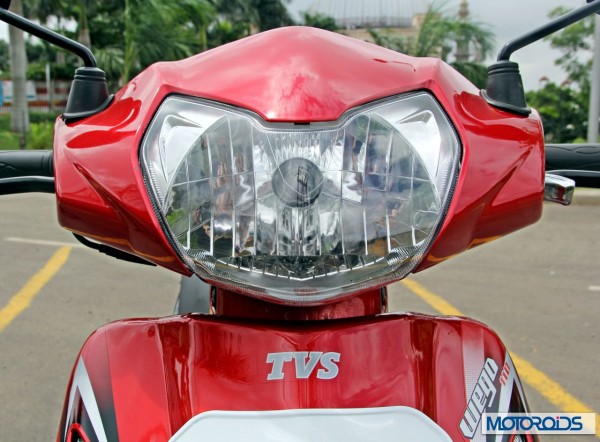 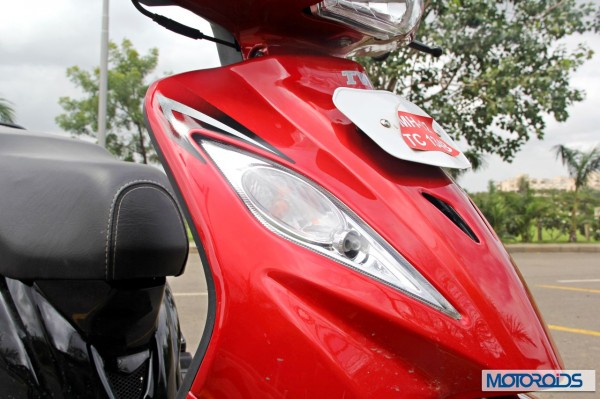 The front continues with its flat nosed character with streaky, slim indicators running by its sides- they feature economical bulbs as parking lights though. The side panels are pleasingly contoured, but not designed to thrill. The tail lamp looks cool, and is a pretty large affair featuring all LED illumination with optical guides flanked by big indicators – them being non LEDs. 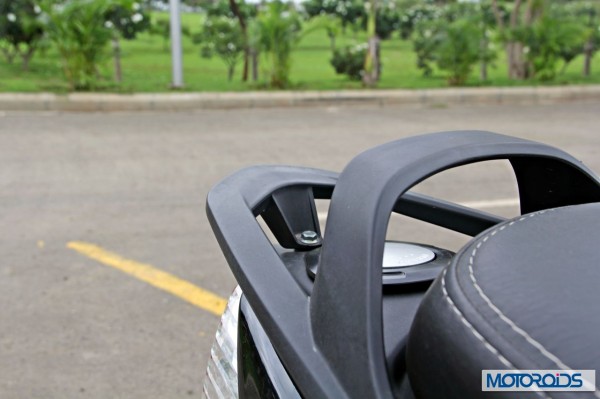 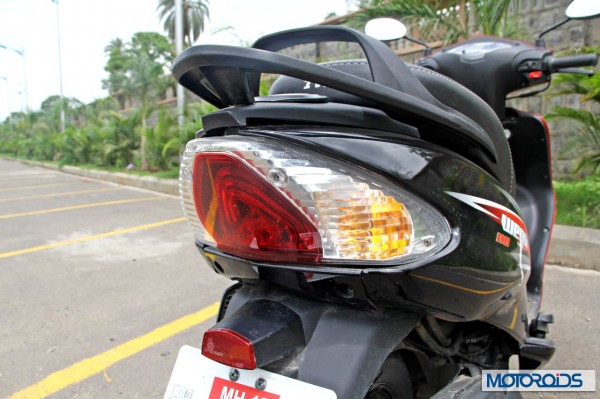 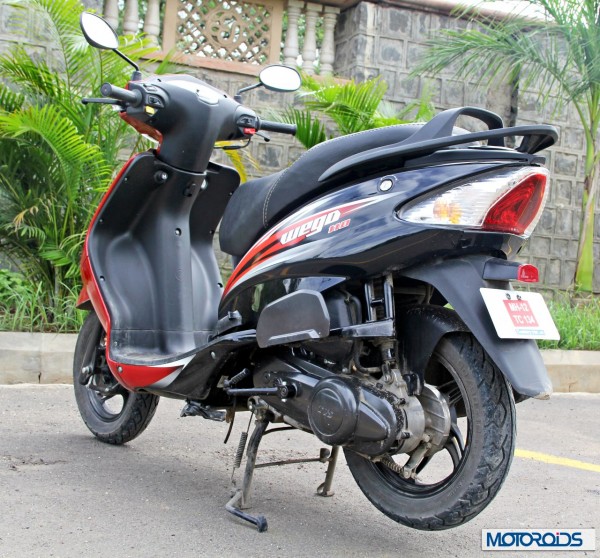 To top it up, the Wego 110’s docile styling has been upped in appeal by small details, which make it genuinely pleasing to look at.

The seat: Oh man, that thing’s like a throne! 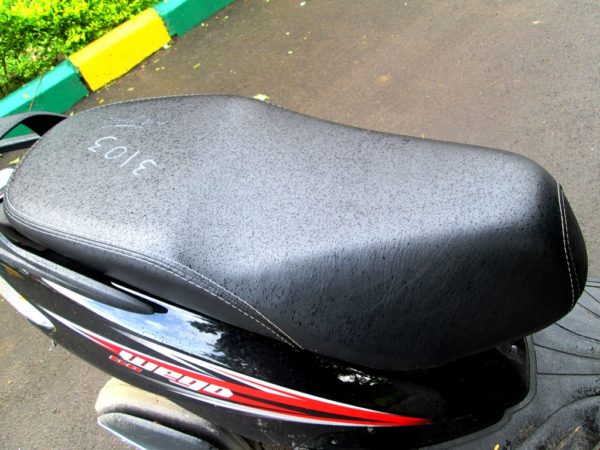 It is new, soft, cushy and large – people loved it. TVS refers to it as an “anti-skid non-hysteresis seat”, with intent to keep one comfortable in all weather conditions. In fact, even reasonably long distances are delivered without sore backs or major discomfort. Moreover, the suspension is superb, the Wego 110 glides silently over bad patches on the road. To the in-line telescopic forks up front and the unit swing with the spring-loaded hydraulic, gas filled damper at the rear- good job! The comfy seat teamed with the capable suspension give the Wego 110 a supple ride quality that can be easily the best in class- a nod to TVS’s claim as it being a ‘luxury’ scooter. 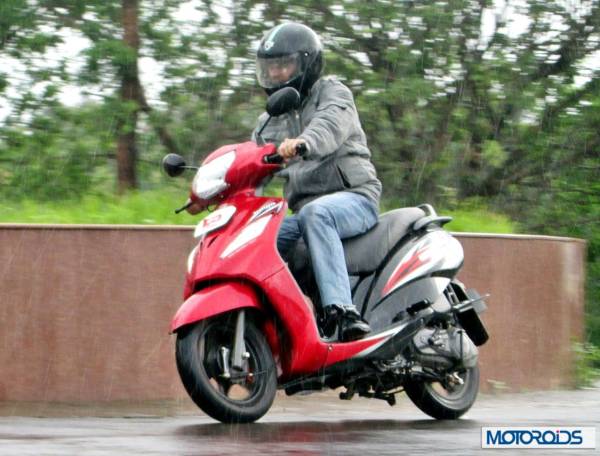 That doesn’t mean the handling’s rotten though! It does perform in its natural habitat- chaotic urban traffic. Although not immensely confidence inspiring, the luxury scoot can be chucked into gaps in traffic, making things look darn easy. Credit goes to some intelligent engineering by the chaps over at TVS- it’s called Body Balance Technology, in marketing speak, and enables lower steering effort, better control and maneuverability through optimum vehicle mass and mass distribution, making it the best scooter to handle in city traffic conditions– according to TVS. High-speed handling is not an issue either, with the Wego 110 holding steady even in the upper reaches of its top speed. Those new TVS made tubeless rubber give it oodles of grip, even in the wet. 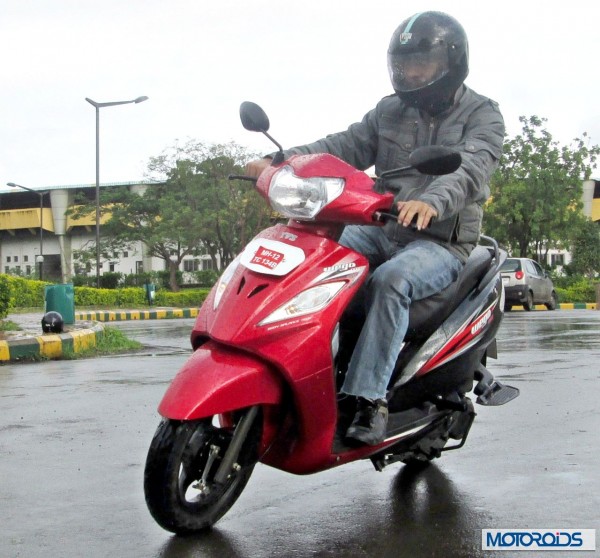 The 130mm drum brakes are a little less praiseworthy, but get the job done. The rear brake feels a tad spongy, and lacks that confidence-inspiring bite. The front drum’s just dismal- we reckon the optional 220mm disc would do a better job. However, under hard braking in the wet, the Wego110 managed to hold her line and managed to stop without much theatrics- with minimal lock. The scooter also gets a manual handbrake for the rear.

>>Next page for Ergonomics, Fuel Efficency and Verdict>> 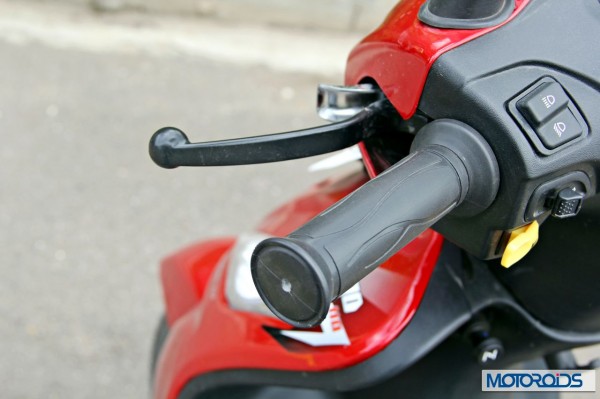 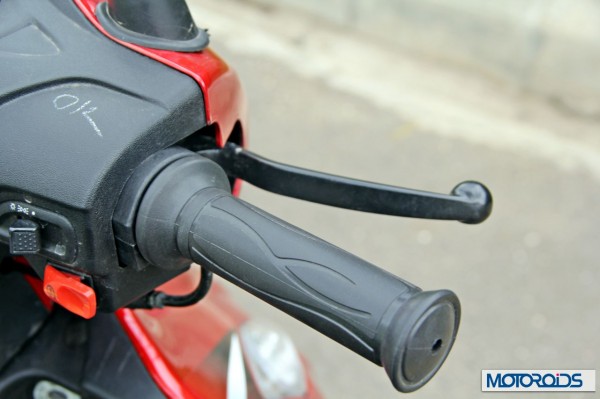 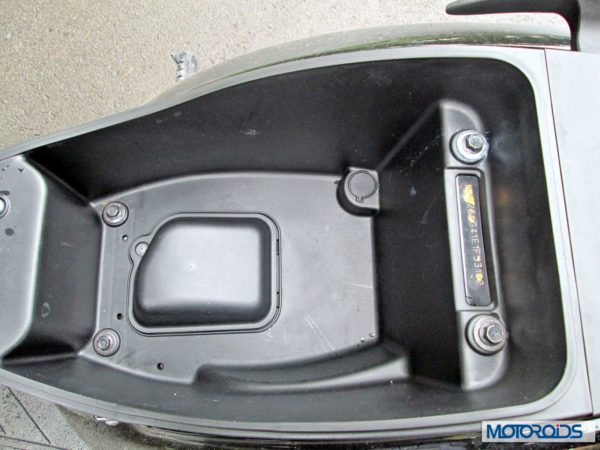 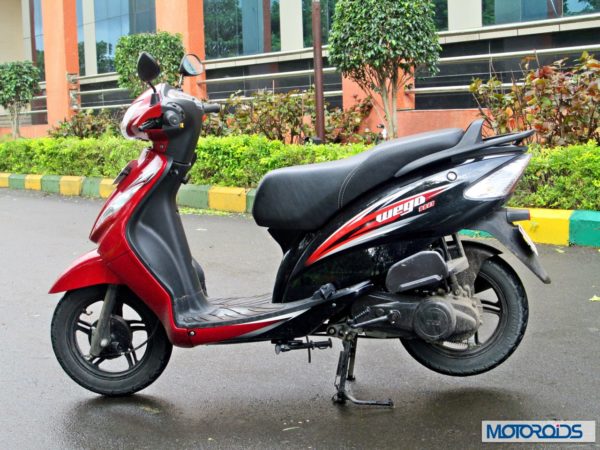 The foot well is a tad cramped. The seating position is upright, but that of ease. The handlebar grips form nice touch points and the instrumentation feels decently made and is nicely laid out. Also worth noting is the new fully digital cluster backlit in blue with smart alerts for fuel, battery and service. Under seat storage area is decent at 16 liters, but not enough to store a full-face helmet. Also, our test vehicle didn’t have the under seat cell phone charging option nor the front glove box. The handle can be locked with it being either on the left or the right hand side, enabling ease of parking in tight spots. The ignition slot also has a glow in the dark feature to prevent fumbling in darkness. 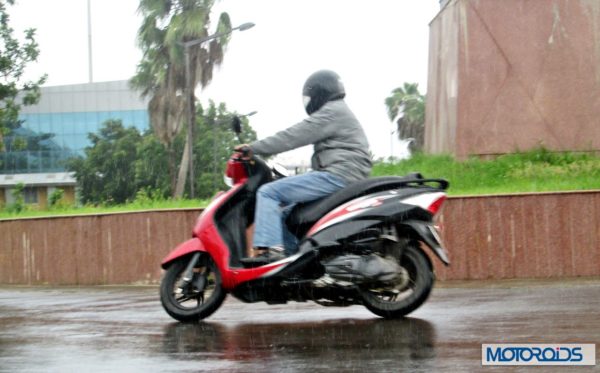 For 2014, the Wego derives its engine from the Jupiter, what is dubbed as the ‘Next-Gen 110cc CVT-I engine’. It’s a 110cc single cylinder, air-cooled, SOHC, all-aluminum, low friction motor, delivering 8.1PS of power at 7500rpm, and a peak torque of 8Nm at 5500rpm. The power delivery is smooth and linear, but she’s no screamer. 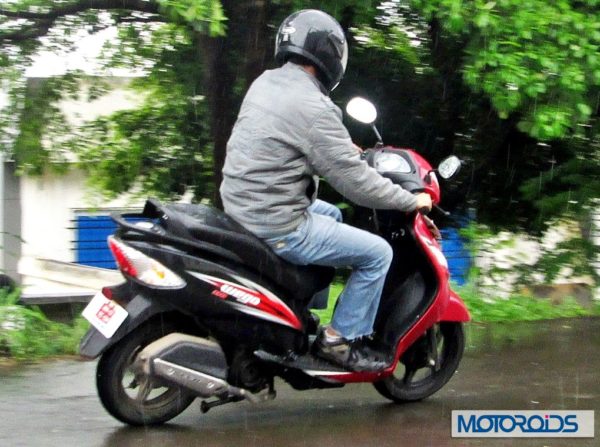 Healthy dabs on the throttle will see one hit the orange Power Mode light on the console all the time- yes, the Wego 110 also comes with TVS’s Econometer, allowing the rider extract maximum efficiency from a run. But the motor offers tractable performance, with a healthy mid-range, more than adequate for urban exploits. The Wego 110 supposedly sprints from a standstill to 60kmph in a leisurely 11.2 seconds. Out on the highway though, going gets tough after 70kmph, with the Wego 110 reaching an indicated 85 kmph. Refinement levels are of the highest order, and coupled with the supreme ride comfort and the CVT transmission, the Wego makes commuting seem effortless- driving home the point of such twist-and-go rides. 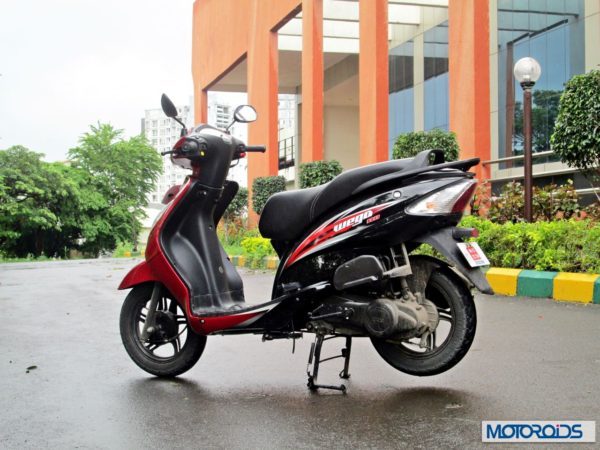 TVS claims a class leading 62 kmpl under standard test conditions. We extracted 46 kmpl in the city, but with a barely run-in vehicle, trying hard to keep it in the Economy mode- we reckon it’ll do 49 kmpl in real world test conditions. The range gets a little small and annoying, considering the rather small 5 liter fuel tank. 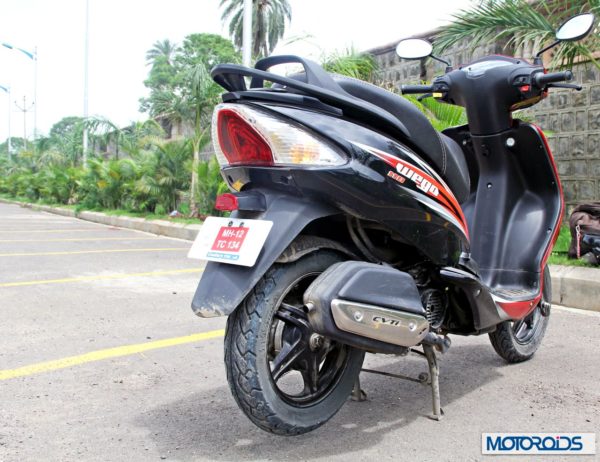 Packed with new features and style, the Wego 110 makes a strong and youthful proposition for itself amongst its chief competitors – the Yamaha Ray, Honda Dio and the Suzuki Let’s. One cannot go wrong with it. Be it the utter sense of ease whilst piloting it through the city, or the new sophisticated, grown-up looks- the Wego 110’s attributes make to be one of the better scooters out there. The lack of under seat storage for a full face helmet, the small fuel tank/range or the average braking might pinch some, but it’s still worth a buy if one’s in the market.

*all prices ex-showroom Mumbai as the vehicle was tested

>>Next page for image gallery>>