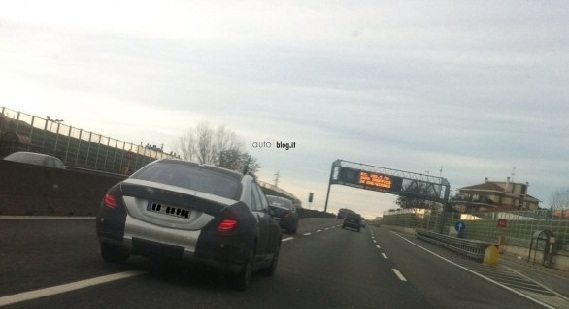 The 2014 Mercedes S Class has been regularly in news in recent times. The new S Class, which is currently in final stages of development, has been undergoing road tests since some time now.

Two test mules of the 2014 S Class were recently caught testing by Mr. Claudio in Italy. The two S Class test mules were spotted in Milan and were seen sporting German number plates.

Codenamed as W222, the new S-Class will be unveiled at the Frankfurt Motor Show this year.

It is being said that the next generation of sedan is new to the smallest of the details. Looking at the spy shots, it can be said that the car continues to be almost similar in dimensions to its current gen model. It is being said that the grille of the new car will be somewhat ‘in your face’ and will have a more daunting front fascia. However, the design form of the grille remains to be typical Merc. So much that we wonder why did the German car maker even bothered to hide the insignia on the examples of the car that have been caught testing earlier. In side profile, the car is distinctively Merc and now has an even stronger character line. The interiors, from what our sources have been telling us, remain typical Merc affair but with a dash of sportiness injected to them. Back at the rear, the car will have a smoother design with more more stylish tail lamps.

We have reported a fair bit about the upcoming gen of BMW 7 series. Both of the age old German rivals appear to be getting even better in order to outsell the other.

The 2014 Mercedes S Class will be loaded to the brim with safety features that would make the car one of the safest sedans on road.