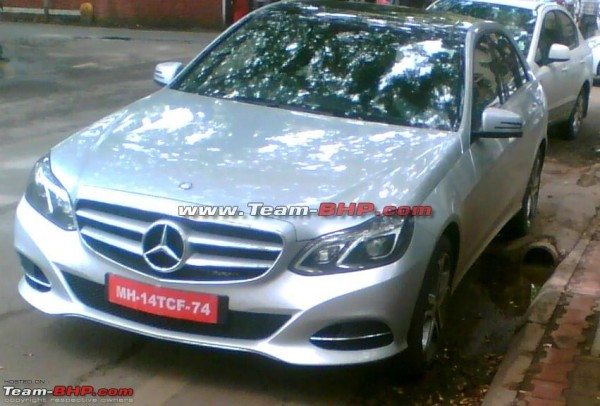 It recently emerged that the 2014 Mercedes E Class will be launched in India on the June 25. Also, a 2014 E Class was recently spotted near ARAI, Pune. The variant that has been spotted is the E250 CDI diesel variant.

The 2014 Mercedes Benz E Class facelift features a single unit for each headlamp (replacing the current two units on each side). Along with getting a new set of headlamps, the front fascia also gets a revised grille and front bumper. The new grille on both the standard and performance variants sports a three pointed star and overall, the front end manages to look uncluttered and yet, sophisticated.

At the rear, the car seems to feature revised headlamps and a more sculpted bumper.

Changes on the inside would be minimal with only new bits being a new three spoke steering wheel and a revised instrument binnacle.

We feel that overall, Mercedes has managed to improve upon the previous design without having to come up with an all new car altogether.

The E Class is already the highest selling car in Mercedes India’s line up and there are good chances that the facelift will help the E Class with posting an even better sales figure in India.