Enough has already been speculated about the upcoming 2014 Maserati Ghibli that will make its public debut at the 2013 Shanghai Auto Show later this month.

Putting to rest almost all the speculations about the design of the upcoming Maserati sedan, official images of the car have been leaked on to the cyber space.

The Ghibli is being touted to be a baby Quattroporte and as was expected, looks much like a scaled down version of the flagship. However, the car does get more aggressive details and other bits. On the inside, the car gets two-tone red and black interior trim and gets a liberal sprinkling of carbon fiber bits around the centre console. Adding to the classiness of the cabin is an analogue watch.

The new Ghibli will be pitted against the BMW 5 Series and the Mercedes E Class variants. Many believe that the car might also become an indirect rival of the Mercedes CLS Class and the Audi A7 Sportback. 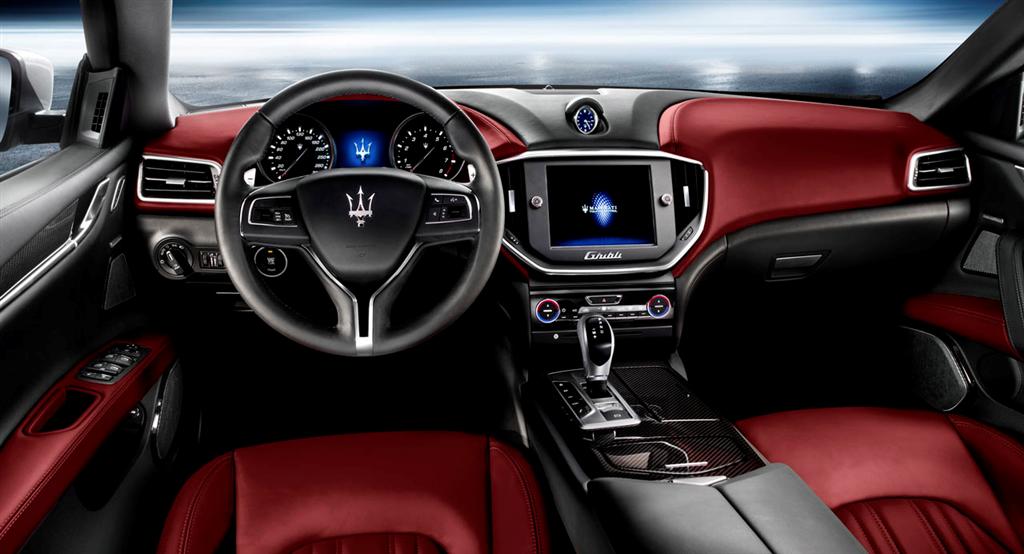 The new Ghibli will be a shade under 5 metres in length and will be offered with a set of V6 and V8 petrol engine options. These engine options, which consist of a twin-turbo 3.0-liter 385hp V6 engine and a twin-turbo 3.8-liter 480hp V8 engine, will be mated to an eight-speed gearbox that will transmit the power to all four wheels. Safely expect the Fiat group owned Italian luxury car maker to also come up with at least one diesel engine option for the new 2014 Maserati Ghibli. It may be noted that thanks to the increased preference for diesel powered luxury cars in markets like that of India, bringing in an oil burner makes a lot of sense for the car maker.