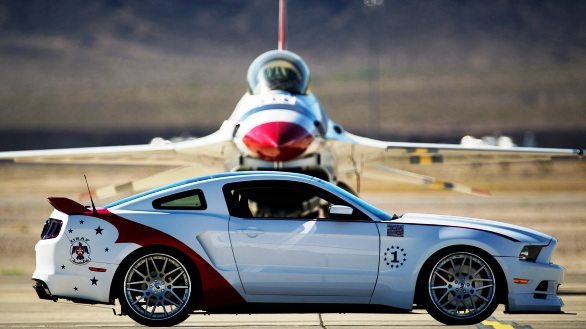 What you see here is Ford Motor Company’s annual one-off charity car for this year. The car has been christened as the 2014 Ford Mustang GT USAF Thunderbirds Edition and like every year, is built in honor of the US Air Force.

This year’s Mustang takes design inspiration from the U.S. Air Force Thunderbirds, which celebrated their 60th anniversary this year.

The new USAF Thunderbirds Mustang GT sports a white paint job with red and blue accents, along with USAF stickers. This special edition Mustang will be auctioned off at the Eagles charity event (a part of the Experimental Aircraft Association (EAA) AirVenture Oshkosh 2013), which will be held in Wisconsin on August 1. Proceeds from this auction will go to Young Eagles organization.

One of the biggest visual changes of the special edition Mustang is its roof, which inspired by the F-16’s canopy, comes with glass roof panes. The car also gets a wide-body kit, a rear deck spoiler and 22-inch Forgiato wheels.

On the inside, the special edition Mustang takes a cue from the fighter jets and becomes a strict two-seater, with Recaro bucket seats for driver and the front passenger. The interiors of the car also get a customized navigation screen, revamped instrument cluster, unique door-sill plates and puddle lamps.

Powering the car is Ford’s 5.0 litre V8 that benefits from a supercharger and a high-flow exhaust. The car also gets a sportier setting for the suspension and powerful brakes from Brembo.

“The dedication and excellence displayed by the United States Air Force Thunderbirds are qualities we also celebrate at Ford,” said Edsel B Ford II, from Ford board of directors. “With this year’s beautiful U.S. Air Force Thunderbirds Edition Mustang, we’ve captured the recognisable symbols of their stature and paired it with the innovation our Ford design and engineering teams build into all of our products. Through this project, we take great pride in continuing our support for EAA and the Young Eagles organisation,” Ford added.