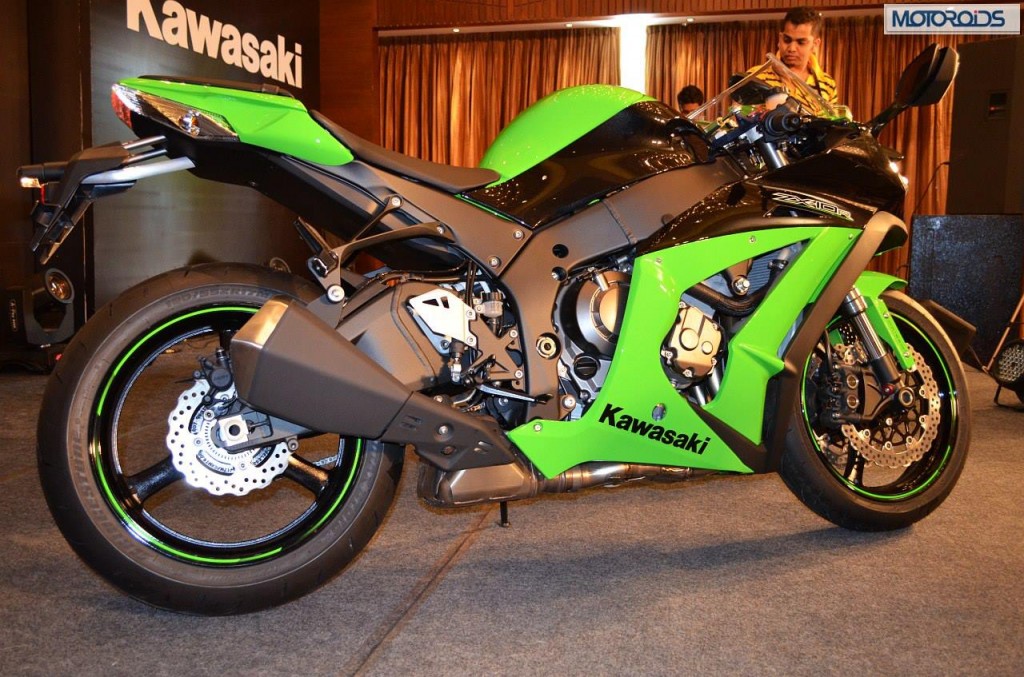 The 2013 Kawasaki ZX10R is the 6th generation litre class Ninja since it first made to production in 2004. A successor to the popular ZX9R, the Kawasaki ZX10R since inception has seen year on year revamps which majorly have been minor enhancements over the previous models. It was only in 2011, that Kawasaki decided to give a major overhaul shot to the ZX10R’s arm. 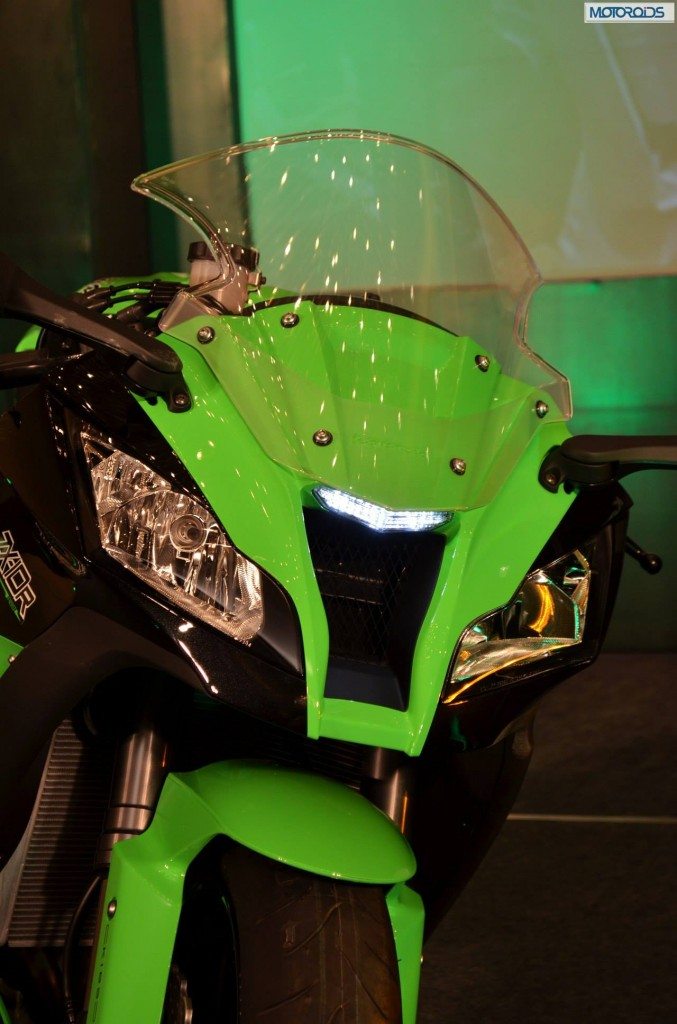 Adorning a new angular and streamlined attire reeking of aggression, the new Kawasaki ZX10R looked meaner than it ever had. From a new set of line-beam headlights, to a stubby but short exhaust and a truncated tail section- all hinted towards design cues taken from Kawasaki’s MotoGP venture. Further visual enhancements included a set of lighter three spoke design cast aluminium wheels replacing the earlier 5 spoke design, LED blinkers mounted on the mirrors and the rear fender with easy detachment for track-days. But the biggest step up on the Kawasaki ZX10R has been in the mechanicals and a new sophisticated electronics package. 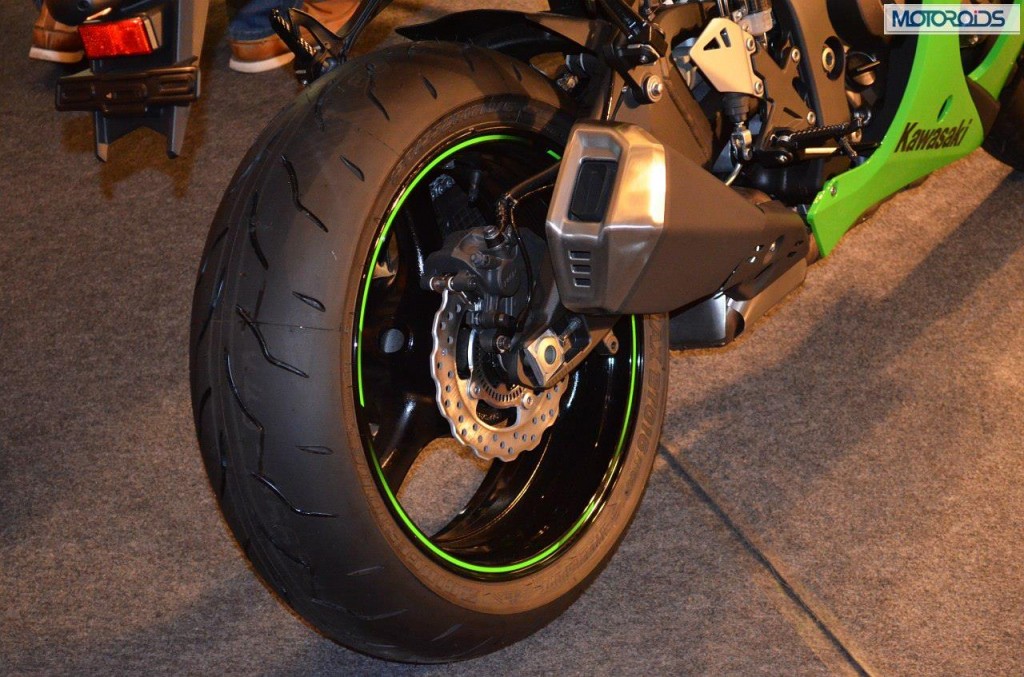 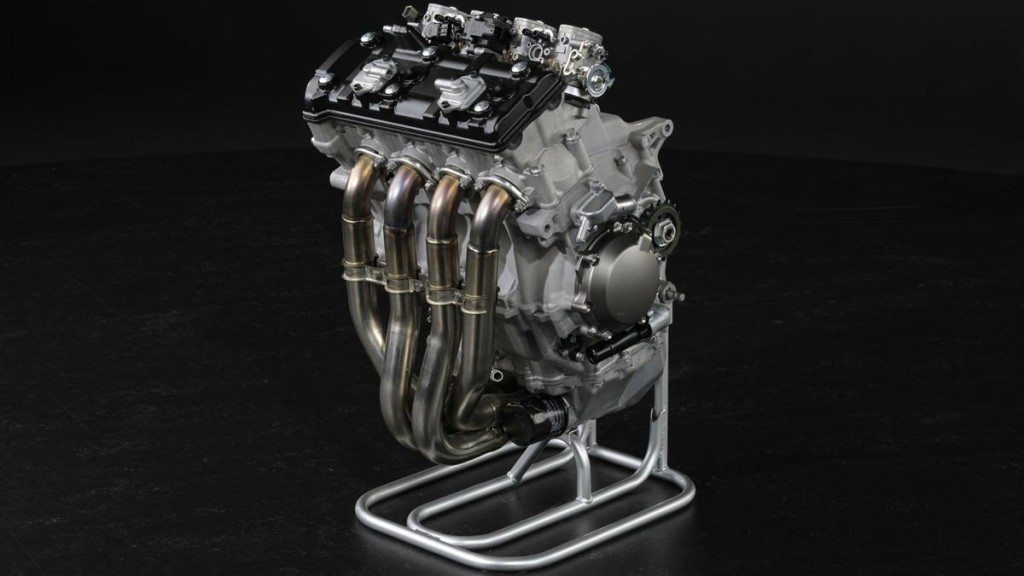 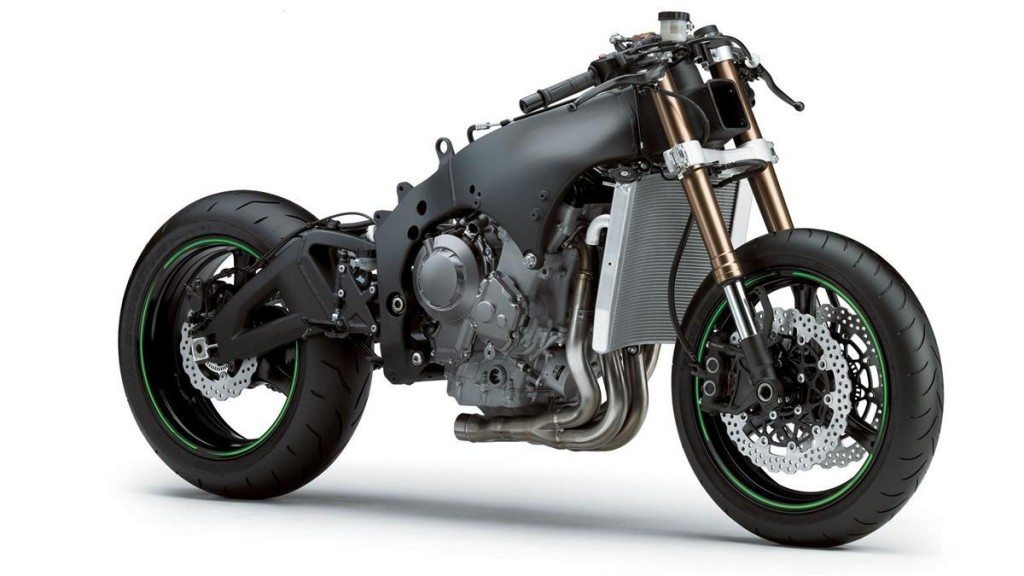 The ZX10R is held together by a light aluminum twin-spar frame which essentially is an assembly of seven different units, though rigid offers the right flex characteristics for ample feedback to the rider during cornering. The chassis is complemented by an equally rigid alloy swingarm and both of these units have managed to shave off 9 kgs of the previous gen ZX10R. 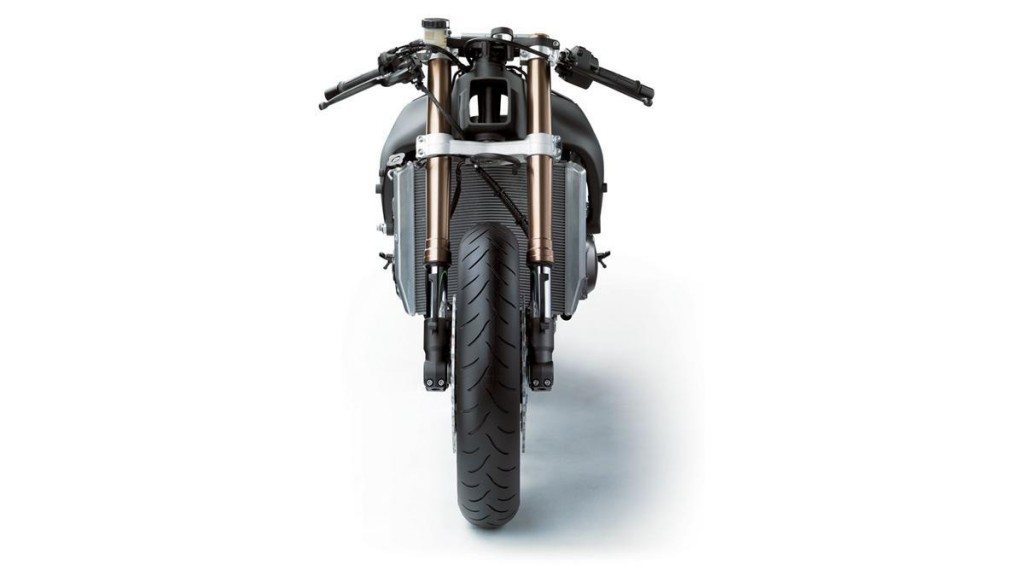 Bringing the brawly beast to a stop is managed by Tokico 4 pot twin 310mm petal discs at the front and 220 single piston disc at the rear with Kawasaki Intelligent Braking System (KIBS)- essentially an ABS tech offered as an optional feature. 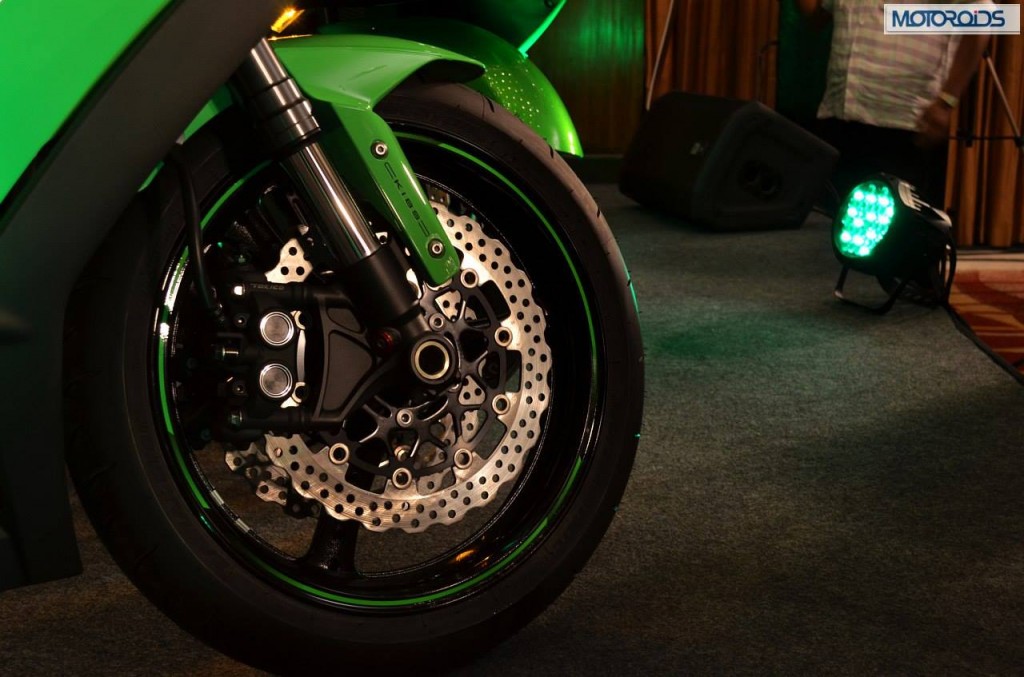 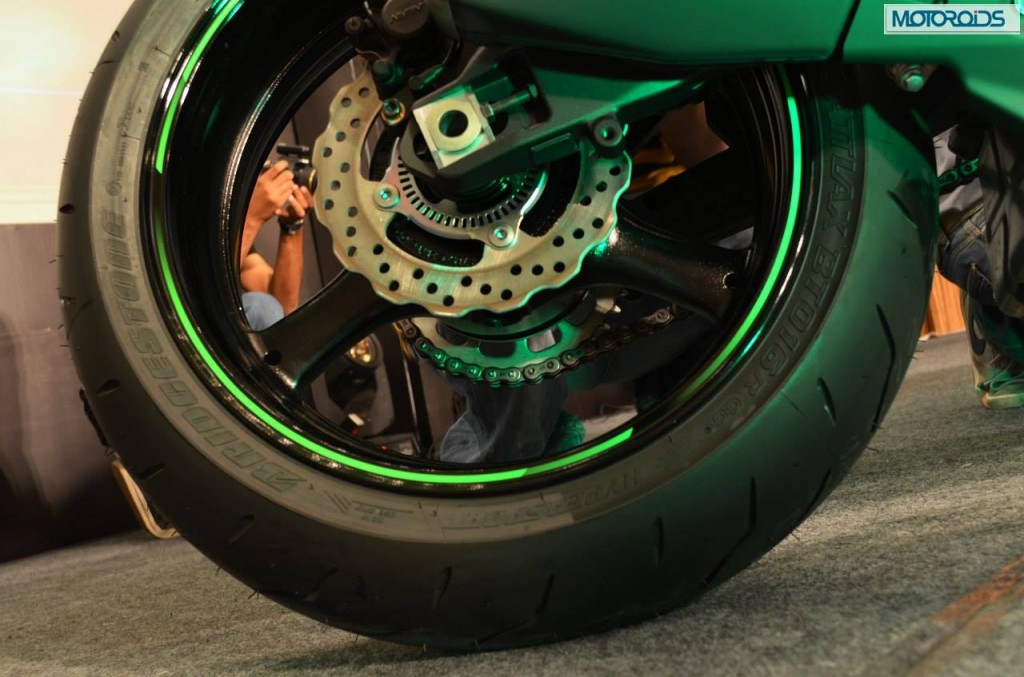 Though retaining all the above numbers from the 2011 version, the 2013 Kawasaki ZX10R now features an Ohlins Electronic Steering Damper. Mounted behind the triple clamp, the damper is automatically controlled by a dedicated ECU that coordinates with the bike’s sensors to eliminate unnecessary headshakes or any prospective tank slaps in the making. 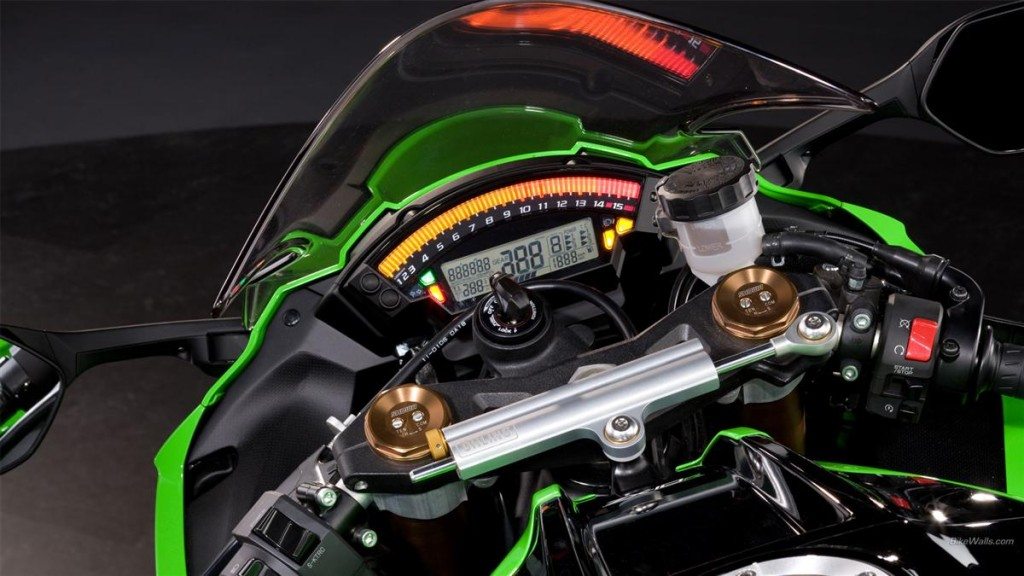 In conclusion, the 2013 Kawasaki ZX10R strikes the right balance of power and balance managed by MotoGP inspired engine management technology- dripping with sophisticated set of electronics making it a formidable force in the litre bike segment- probably the best offering from the land of the rising sun. And though it might still trail the German rocket ship- the S1000RR in the segment, it offers enough slam bang performance when stacked against the Beemer on the price chart. 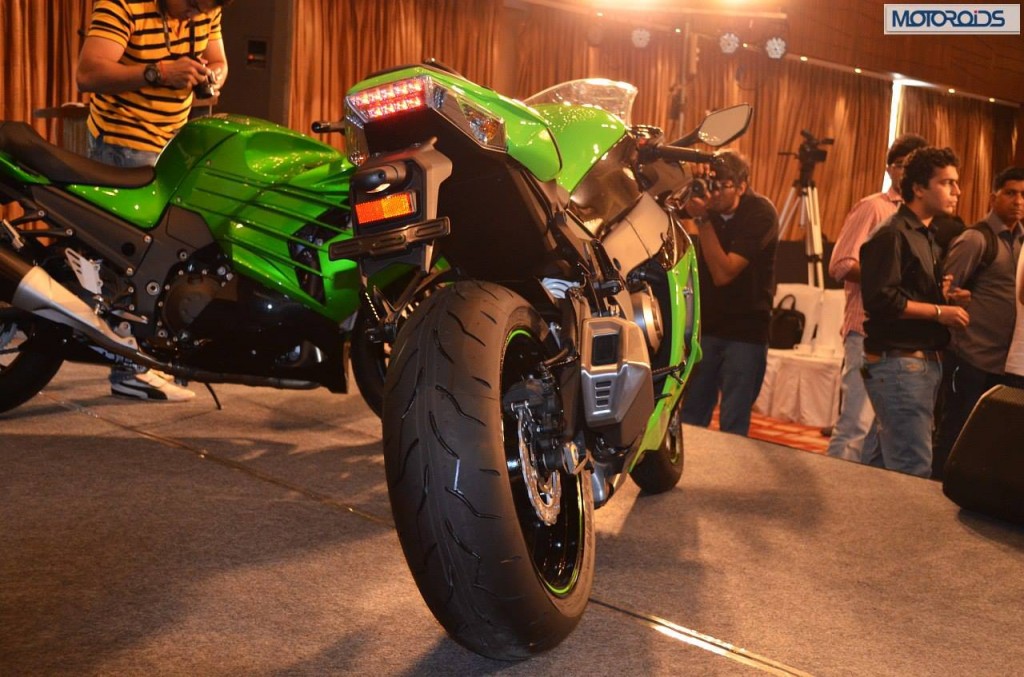 Thanks to the Indian tax structure when it comes to superbikes and yeah the crashing rupee against the dollar, with an eye-watering price of INR 15.7 lacs (ex-showroom, Pune)- the new Kawasaki ZX10R might most of the time be found parked in the dreams of enthusiasts. But for someone who has the moolah to realize his litre bike fantasies- the 2013 Kawasaki ZX10R does render a strong candidature for itself.

The exclusive Kawasaki showroom opens on the 7th of this month at Wakdewadi, Pune and bookings have already started. An early booking would ensure you’d have your Ninja delivered by the end of this month.

So got enough in the bank and the dream to own one? What you’re waiting for! Let the good times roll!