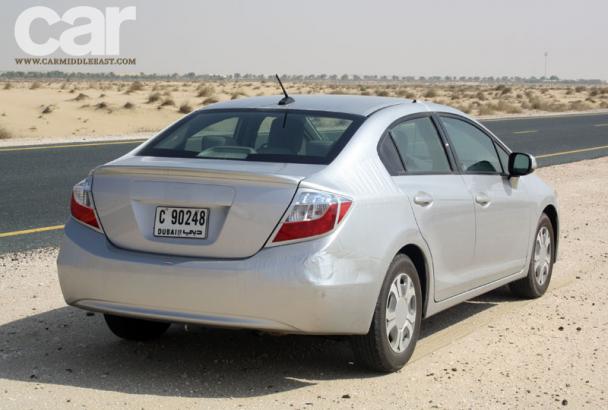 For the past few weeks, the Honda Civic sedan test mules have been repeatedly caught testing in the United States. So it seems Honda decided to move their testing procedures to Dubai this time around with a hope that no would identify the mules of the 2012 Civic sedan. But petrolheads are aplenty in this part of the world too and as you can see, the almost production-ready mules haven’t gone unnoticed this time around either. The blokes at Car Middle East have managed to get photos of the 2012 Honda Civic sedan mule with minimal camouflage.

Like we told you earlier, the new Civic is an evolution of the Honda Insight’s design and for us Indians, the new 2012 Honda Civic looks nothing but a bigger version of the current generation Honda City. We personally feel that this design looks like a couple of steps backward especially comparing the car to the next generation looks of the current Honda Civic. With an all new Toyota Corolla expect by the end of 2011 and the radical new Hyundai Elantra already creating waves world wide (and also planning an India re-introduction), we believe that Honda is is getting itself into trouble with the new design. It will be more functional than the outgoing model, no doubt, with better space and equipment – but would that be enough to tackle the competition? We’ll have to wait and watch.