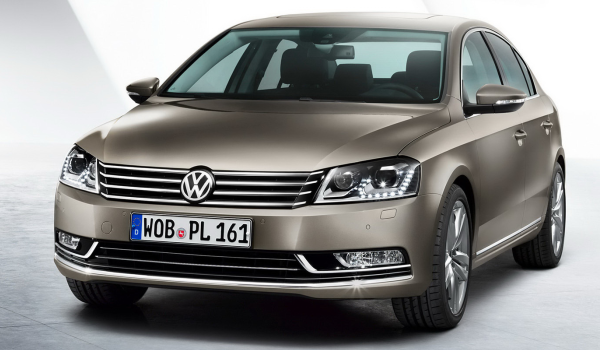 Volkswagen has taken the wraps off the 2011 Passat luxury sedan at the 2010 Paris Motor Show. The much awaited upgrade to the current model, though a mere facelift, has been christened as the ‘7th Generation’ model of the Passat by the reluctant blokes at Volkswagen. The facelift model, as expected, gets a sharper design treatment in line with the rest of its Scirocco-inspired models like the new Jetta, Vento, Polo etc. The new Passat gets a new grille upfront with loads of chrome garnish and the complementing headlights add to the bling factor with medium dose of daytime running LED lights on the outer corners. The taillights too get the LED treatment and an angular design as opposed to the current model’s round lights, to gel with the sharper lines of the new Passat.

The new interiors borrow design cues and gadgets from the VW Phaeton and hence they incorporate new trim options, new dials and an analogue clock to add a classy touch. Safety system upgrades include an auto-brake system as a part of the car’s Automatic Distance Control system. The system claims to automatically apply brakes at speeds of less than 28 km/h in case the car detects a chance of an accident due to negligence on the driver’s or pedestrian’s part. Similarly the system can also auto-accelerate in case it senses the chance of a rear-end collision and after it ensures that there is enough room in front.

Engine options start from a 1.6-litre 105PS diesel engine (yes, the same mill that powers the Vento), mated to a start-stop system to increase fuel efficiency. Other diesels include 140hp and 170hp versions of VW’s 2.0-litre TDI CR mills.  The engine options further unfold in the form of a 1.4-litre TSI, 1.8-litre TSI, 2.0-TSI and 3.6-litre V6 petrol powerplants.  Out of these, we expect the 1.6 (105hp) and 2.0 TDI (170hp) diesels and the 1.8 TSI (160hp) petrol engine making their way to India. The 2011 Passat will go on sale in the US and Europe by early 2011. We are expecting an India launch by June 2011.Pricing for the Passat range is India is expected to drop down by a fair margin since the 1.6-litre’s mass import / localisation plans will play a huge part in reducing end user costs.