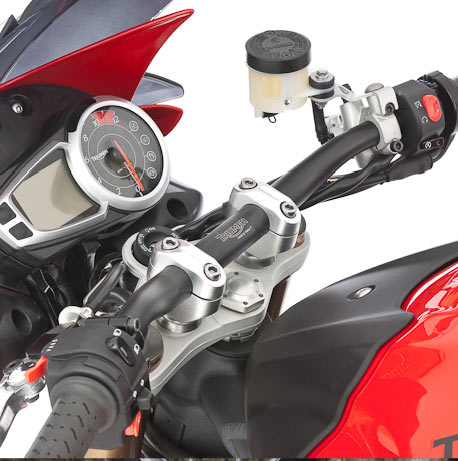 The trend of ‘accidently’ leaking the images of new cars and bikes days before their scheduled launch is fast becoming a trend amongst global manufacturers. The latest in the chain in the ‘accidental’ leakage of Triumph’s 2011 Speed Triple naked bike pictures. The company supposedly exposed its upcoming bike accidently on its accessories website ahead of the official launch next week.

There isn’t much info available about the bike, but one look at these pictures is enough to let you know that the globally acclaimed bike is undergoing a complete makeover in its latest avatar. There are new head and tail lights, new chassis which is lighter thanks to cast alloy construction, new wheels, new swingarm and new instrument console.

Although we don’t know the exact details, the 1050cc three-cylinder also has received a performance boost. That, along with a loss of 5kg in weight means that the new bike would be reasonably  faster than its current version.