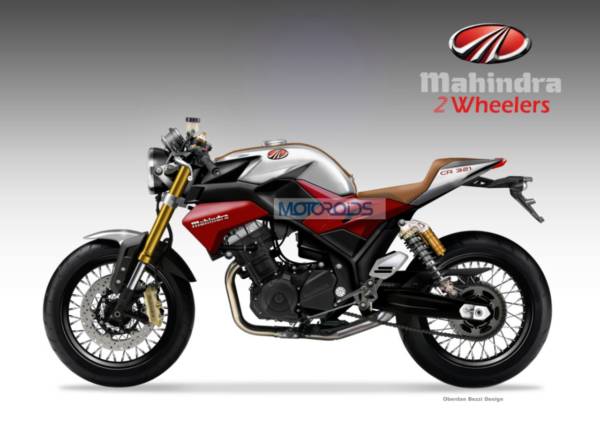 Oberdan Dezzi is one of the rare motorcycling rendering artists from the West who have a keen interest in and understanding of the Indian motorcycle market. In the past, Oberdan has shared with us some of his concepts based on the TVS and Bajaj brand values, philosophy and market positioning. This time, Oberdan exclusively shares with Motoroids his vision of how a Mahindra Two Wheelers’ 320cc single cylinder engine powered cafe racer may look like. He has christened the Concept CR321

Now, Mahindra & Mahindra is already a big name in the four-wheeled world. And the Indian car major, thanks to its technical and financial competence is capable of making it big in the two-wheeler world as well. Oberdan feels that a lack of prowess in the field of design is keeping the company from achieving the objective.

The Mahindra CR320 cafe racer is one of the suggestions by Oberdan which has the potential to turn the fortunes of the company around in developing markets like India. The Mahindra CR321 is proposed to be a totally new motorcycle, following the latest trends in European and North American sports bike circles. It’s suggested to be a cafe racer, a naked sports concept, with a race oriented riding position, classic styling but with modern and hi-tech cycle parts as required by this kind of bikes these days.

The chassis is conventional but sized on the European standard measures, while the engine is proposed to be a 320cc, single cylinder, four valves, fuel injected unit, which will be the most powerful in its class. Oberdan believes that a bike on these lines – styled and developed in Italy, employing a latest generation, generously sized engine with excellent components for brakes and suspension should be a guaranteed success.

Also, based on the CR 321, and once having realized it in the flesh, Mahindra could develop a whole range of spin-offs. There could be cheaper variants, an on-off road version, a fully faired iteration and so on. Such a bike in its final form would be an excellent model for export to markets in South America.

Do you agree with Oberdan? Do you think such a concept can work in the Indian context or would be too little too late? Do share with us your views via comments.