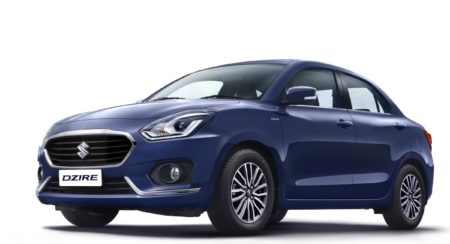 The Dzire is the most affordable sedan in Maruti Suzuki's lineup, starting at a price tag of Rs 5.60 lakh to 9.44 lakh (ex-showroom- Delhi). In terms of looks, the car resembles the new-generation Swift but gets the added practicality of a bigger boot and more cabin space.

In terms of looks, the new generation Maruti Suzuki Dzire resembles the 2018 Swift. The sedan gets a sporty looking grill which is surrounded by chrome. Illumination is via an LED projector headlamp setup which also gets LED DRLs. The Maruti Suzuki Dzire gets 16-inch precision-cut dual-tone alloy wheels and it also features electronically adjustable body coloured ORVM with integrated side indicators, and body coloured door handles.

At the rear, the Dzire gets a boot which lends it with proper 3-box sedan appearance. Compared to the older-gen car, the new Dzire gets LED combi tail lamp, reverse parking sensors, and a chrome applique which runs through the centre. The radio antenna is of the shark fin type and there's Dzire badging at the back. The new Dzire is built on the company's 'Heartect' B-platform which makes it lighter by 105 kg for the diesel and 85 kg for the petrol trim, in comparison to the older-gen car. The sedan has been immensely popular since launch and has even outsold the Alto, Maruti's long-standing bestseller.

On the inside, the Maruti Suzuki Dzire gets a premium cabin. The sedan gets faux-wood inserts on the dashboard and a flat-bottom steering wheel with steering mounted controls. The centre console features a touchscreen infotainment system with Android Auto and Apple Car Play compatibility. Chrome accents on the A/C vents add to the premium factor.

The automatic A/C works really well to cool the cabin on a hot sunny day in no time. The Maruti Suzuki Dzire gets ample amount of legroom and headroom to comfortably seat five-passengers at a time. Comfort and utility have been addressed, as the Dzire gets a rear armrest, rear A/C vents and an outlet for phone charging. The Maruti Suzuki Dzire employs a new instrument cluster which features analogue dials for the speedometer and engine speed. A TFT digital display is new and provides a plethora of driving-related information to the driver, including fuel, distance, time, temperature and a gear indicator.

The Maruti Suzuki Dzire gets standard dual airbags and ABS with EBD for all its variants. In addition to that, the car can be opted to feature a reverse parking camera and reverse parking sensors. Other safety features include an anti-theft security system, speed-sensitive door locking, front fog lamps, rear defogger, night/day adjustable IRVM and engine immobilizer.

Mechanically, the Maruti Suzuki Dzire derives power from a 1.2-litre, naturally aspirated,  petrol unit, developing 82 ps at 6000 rpm and 113 Nm at 4200 Nm. It comes paired with a 5-speed MT and AMT. A diesel motor is also on offer, which churns out power and torque of 74 ps at 4000 rpm and 190 Nm at 2000 rpm respectively. Transmission duties for this engine are handled either by a 5-speed manual or an (AMT) automatic gearbox with as many ratios. The motors are fuel-efficient and are rated for 22 Kmpl and 28.40, for petrol and diesel options respectively.

For being a four cylinder engine, the 1.2-litre petrol unit is refined and feels peppy. It is rev-friendly and paired with either gearboxes, makes driving a smooth affair. On the other hand, the Fiat-sourced diesel engine feels punchy, is extremely efficient and is the engine of choice if your monthly driving average is on the higher side. Between the two, the diesel engine should be the choice if most of your driving will be out on the highways.