Project Nanhi Kali was initiated by Anand Mahindra (Chairman & Managing Director of Mahindra & Mahindra Ltd.) with the aim of providing primary education to underprivileged girl children in India. They are launching a Proud Fathers For Daughters campaign tomorrow, which is an initiative in support of Project Nanhi Kali. The project is jointly managed by the K.C. Mahindra Education Trust and the Naandi Foundation and currently reaches out to almost 100,000 girls, from remote rural, tribal and poor urban communities across 9 states in India provides educational support, both academic and material, to underprivileged girls. 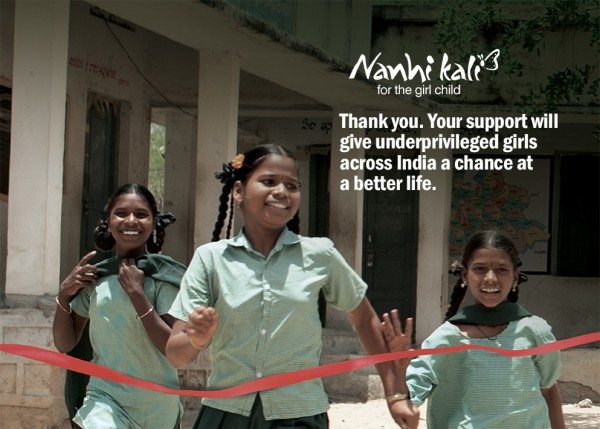 The preference for sons in India is a well-documented phenomena and the child sex ratio of 914 girls to 1000 boys in India paints a very dismal picture. The reasons behind the preference for boys over girls are complex and economic growth hasn’t resulted in a shift in social attitudes in many states across the country. In order to change these prevalent attitudes, Project Nanhi Kali is launching the Proud Fathers For Daughters campaign featuring photographs of celebrities and their daughters. It aims to inspire more fathers to celebrate the special bond between fathers and their daughters. The campaign seeks to encourage families to have pride in their girl child, and creates a movement where sons and daughters are viewed as equals. The campaign has been conceived by renowned photographer, Atul Kasbekar who has personally taken photographs of the celebrities that are featured in the campaign. These include Anil and Sonam Kapoor, Sachin and Sara Tendulkar, Rishi and Riddhima Kapoor, Javed and Zoya Akhtar and Alyque Padamsee with his daughters, Shazahn and Raell. The campaign is not, however, restricted to celebrities but also encourages fathers from all walks of life to capture the essence of their relationship with their daughters, through a photograph taken by Kasbekar and well known photographer, Daboo Ratnani, in exchange for a small donation to Project Nanhi Kali.

“As the proud father of two daughters, I believe that initiatives such as this can create a ripple effect and gradually help bring about an attitudinal change in our society where there is a marked preference for boys over girls. We need to value and cherish our daughters and give them the same opportunities as our sons, which is the guiding spirit of Nanhi Kali as well,” said Anand Mahindra, Chairman, Mahindra Group, while commenting on this unique campaign. Sharing his views, Atul Kasbekar added, “After shooting for more than two decades, I find a deep inner need to create images that have value outside commercial considerations. That India is sitting on a time bomb given the skewed gender ratio is now glaringly obvious and the need to fix it is of paramount importance. My personal belief is that a mindset change has more of a social impact than any number of laws possibly could. If my images can make a difference to this important issue, it would be most gratifying.” For more information on ‘Proud Father For Daughters’ and to donate to Nanhi Kali please visit https://www.nanhikali.org/proud-father/index.aspx