Japanese motorcycle major Kawasaki has yet again teased the upcoming Ninja H2 prior to the Intermot launch on September 30, 2014. This time, the company has compared the new H2 with the 1971 750SS Mach IV which was also called H2. The 1971 H2 was renowned as the fastest motorcycle with incredible acceleration. 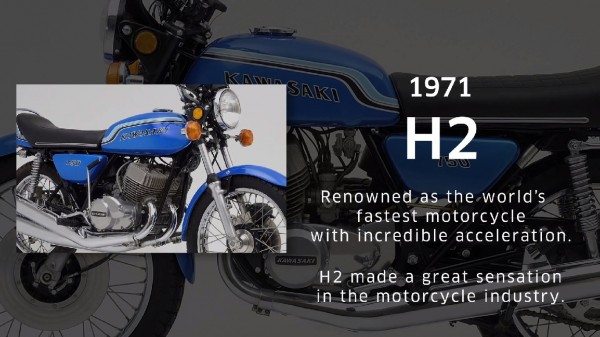 Now, Kawasaki claims that H2 sensation with the 2014 model. Earlier too, the company teased the new 2014 H2 with the fastest Kawasaki motorcycles of their times. The video, although for seconds, shows the 2014 Ninja H2 in action. The H2 is expected to don the supercharged four-cylinder engine that was revealed by Kawasaki at last year’s Tokyo Motor Show.

So will the Kawasaki Ninja H2 be the fastest production motorcycle till date? Answers would be unveiled, along with the Ninja H2 on September 30 at the Intermot Cologne motorcycle show.

Stay tuned to Motoroids for all the updates from motoring industry.