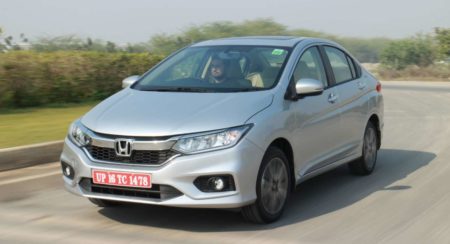 The Japanese giant has brought in a recent addition to its bestselling C-segment Sedan. The new Honda City gets a ZX MT petrol variant as its top trim, prices start at INR 9,70,000.

The new Honda City comes with an all LED setup for illumination (VX and ZX). Honda has also added two new hues to the colour options. You can now choose between two new colours - Red Radiant Metallic and Lunar Silver Metallic. The side profile is highlighted with 16-inch Diamond-Cut & Finished Multi-Spoke Alloy Wheels. The rear profile gets all-LED tail lamps and a Trunk mounted Rear Spoiler with Integrated LED Stop Lamp. Even the license plate is lit up with LED lights. The rear chrome garnish adds to the premium appeal. the Honda City is available in four variants - V, SV, VX and ZX.

Honda has packed this car well in terms of safety. It has 6-airbags, following Dual SRS driver and front passenger, along with side and curtain airbags. Brakes are equipped with ABS and EBD as standard across all variants. Honda features a Multiview Rear View Camera with rear parking sensors offering Normal, Wide and Top-Down view. ISOFIX Child Mount also comes in standard with the car. Features like Immobilizer with Anti-theft Alarm is also listed in the detailed safety list.

The engine powering the petrol variants of the Honda City is the 1.5-litre i-VTEC 4-cylinder unit which pumps out an impressive 119 PS of power and 145 Nm of peak torque. It is offered with a 7-step CVT or comes mated with a 5-speed Manual gearbox. The fuel efficiency is claimed to be 17.4 Km/l for the manual variant, whereas the CVT version is rated for 18.0 km/l. The peppy, free-revving motor is still one of the biggest reasons behind Honda City's popularity.

There is a 1.5-litre diesel engine on offer too. Mated to a 6-speed manual transmission, the motor cranks out 100 PS and 200 Nm of torque. However, there is no option of an automatic on offer. The engine scores high on driveability and is rated for an efficiency figure of 25.6 km/l. It isn't one of the most refined units out there though.