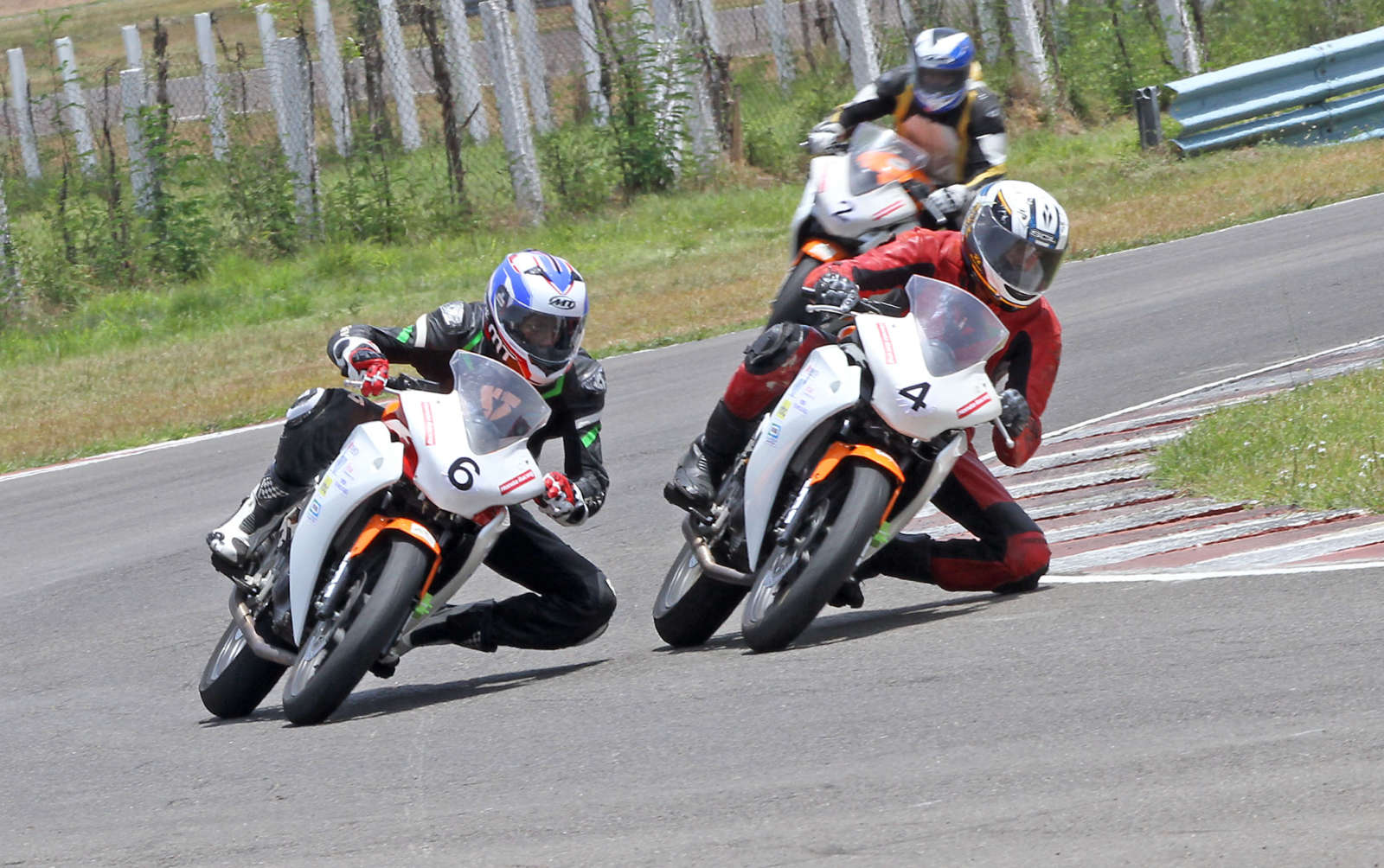 A testament to the steadily albeit slower-than-we’d-like increasing popularity of motorsports in the country, the first round of Honda One Make Race in CBR 150R (Novice) saw a total of 41 entries from all over the country. A huge part of this vigour comes from manufacturers like Honda, who are keen to promote motorsports in the country, providing riding suits and boots for free on rent to Honda Ten10 racing students and informative pre and post-race briefings by Honda Ten10 riding coaches.
In Round 1 of the Honda One Make Race, newcomer Mahesh Mural and Piyush Rajan took a surprise win in the Honda CBR 150 Novice category.
The Second Round of the 2015 Indian National Motorcycle Racing Championship (INMRC), held by MMSC- FMSCI, got off to a great start with Mathana Kumar and Hari Krishnan winning second and third positions respectively in Group C – 165cc category. In the first Honda win in challenging Group B – 165cc category, Sarath Kumar finished in third position. 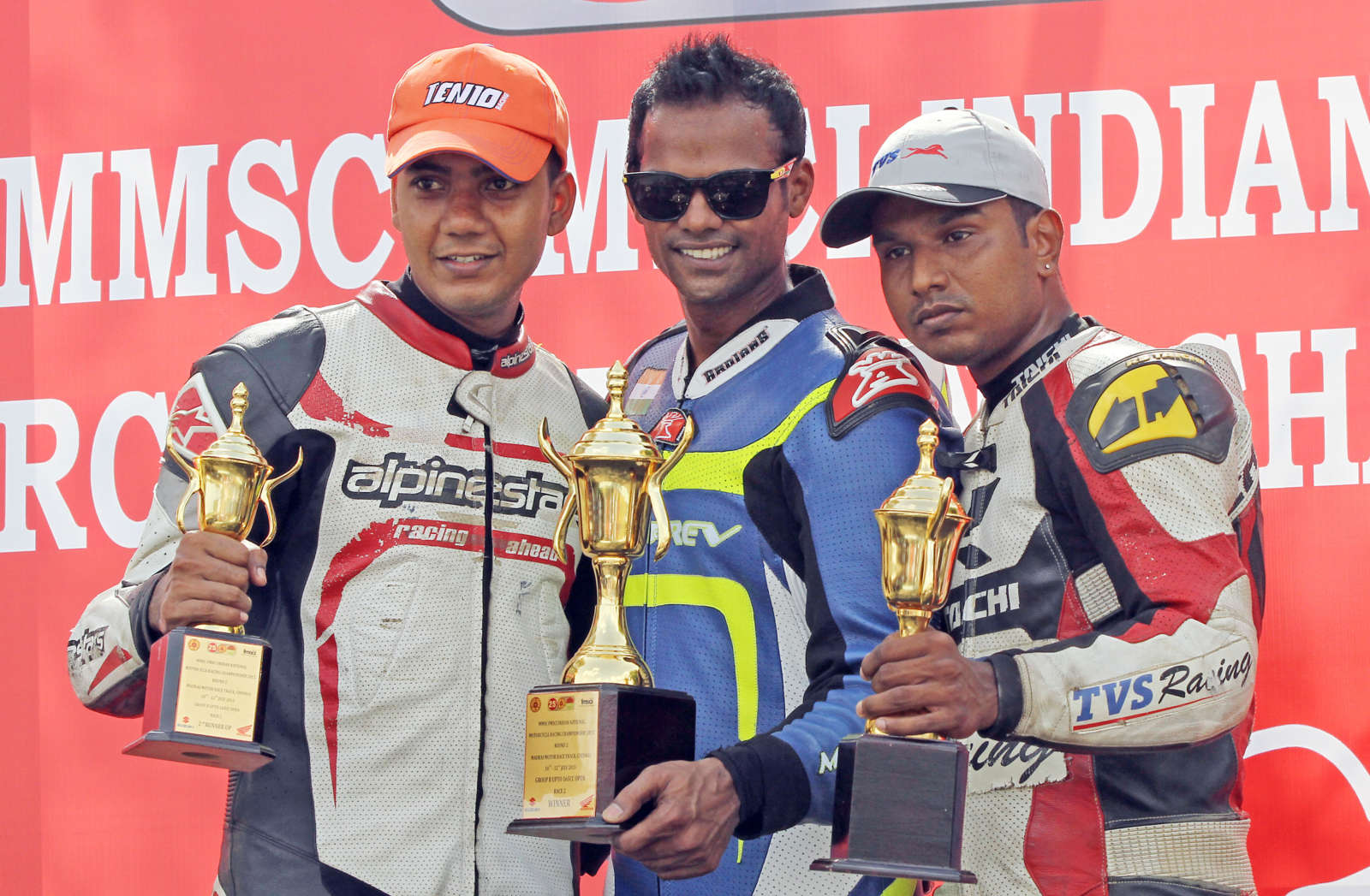 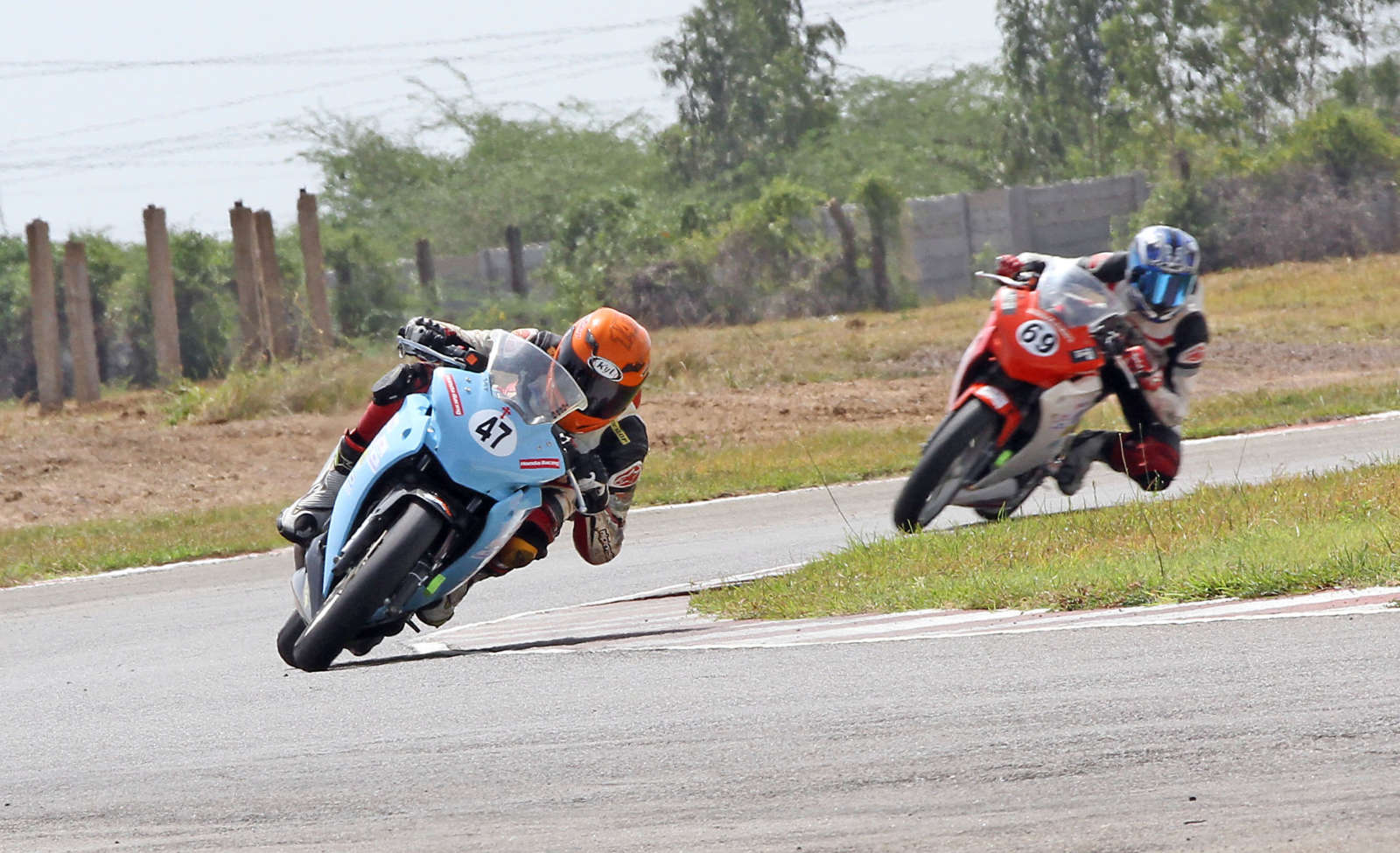 Honda’s One Make Race drew a total of 319 entries last year from racing enthusiasts living in areas as far flung as Mizoram, Ahmedabad, Ranchi, Aizwal, Jalgaon, Pune, Hyderabad, Bangalore, Trichy and Aoroville. Honda leased out 16 CBR 250R performance bikes to teams registered at FMSCI, making the CBR 250R category  a Team Championship. The teams were given free rein to enhance the performance of their race-prepped CBR250Rs any which way they can, excluding the engine, chassis and tires. Honda further supported participating teams with imported HRC performance kits worth Rs. 10,000, and a set of tyres replacement per round. 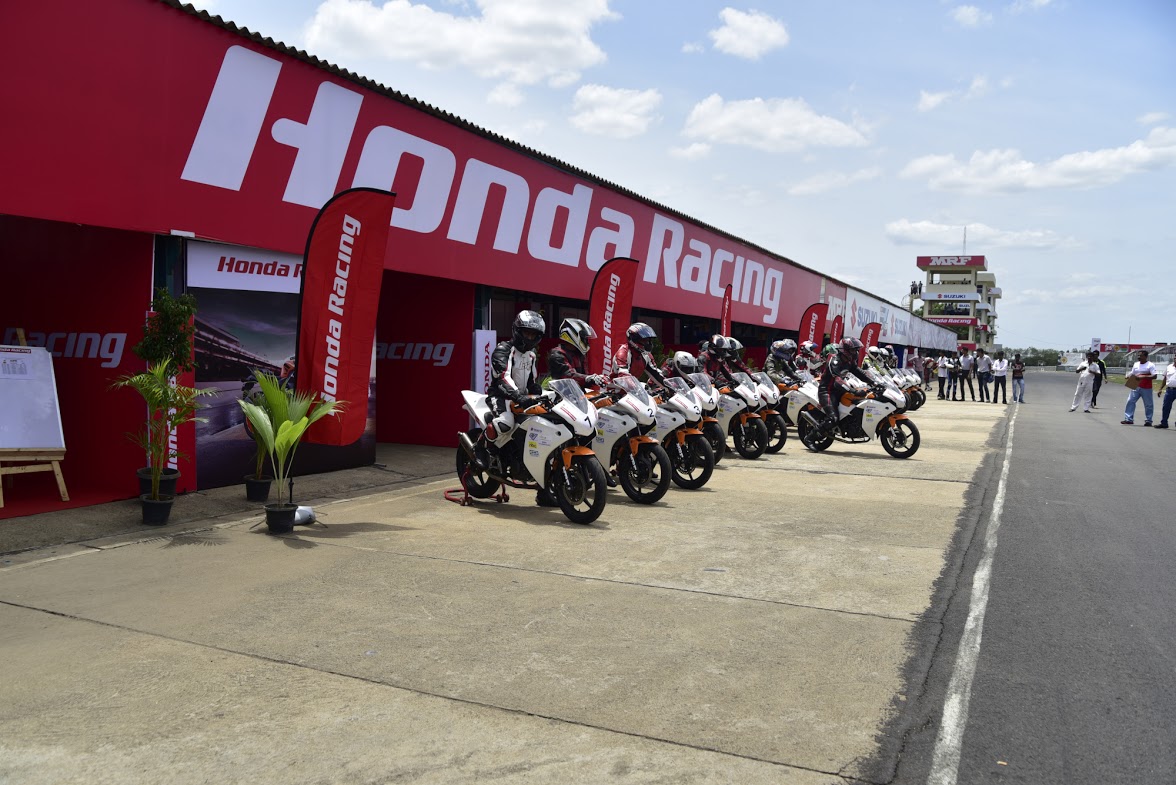 Up till now, Honda has sponsored three riders – Sethu Rajiv, Hari Krishnan, and Sarath Kumar in the Asia Dream Cup, the brain-child of Honda Japan. Three of the six rounds have been conducted at Malaysia, Indonesia and Japan.  This year, for the second time, participants were asked to train at Suzuka Racing School (Suzuka Circuit, Japan) for taking part in Asia Dream Endurance Race – 2 hours.
The company has also signed an MoU with Ten 10 Racing Academy to further develop new talent and nurture motorsport talent in the country. Already, 6 academy sessions for professional racing training have been held, wherein over 150 riders above 15 years of age participated. Encouraged by the response, Honda will hold its next racing academy this month at Bhubaneswar (Odisha). 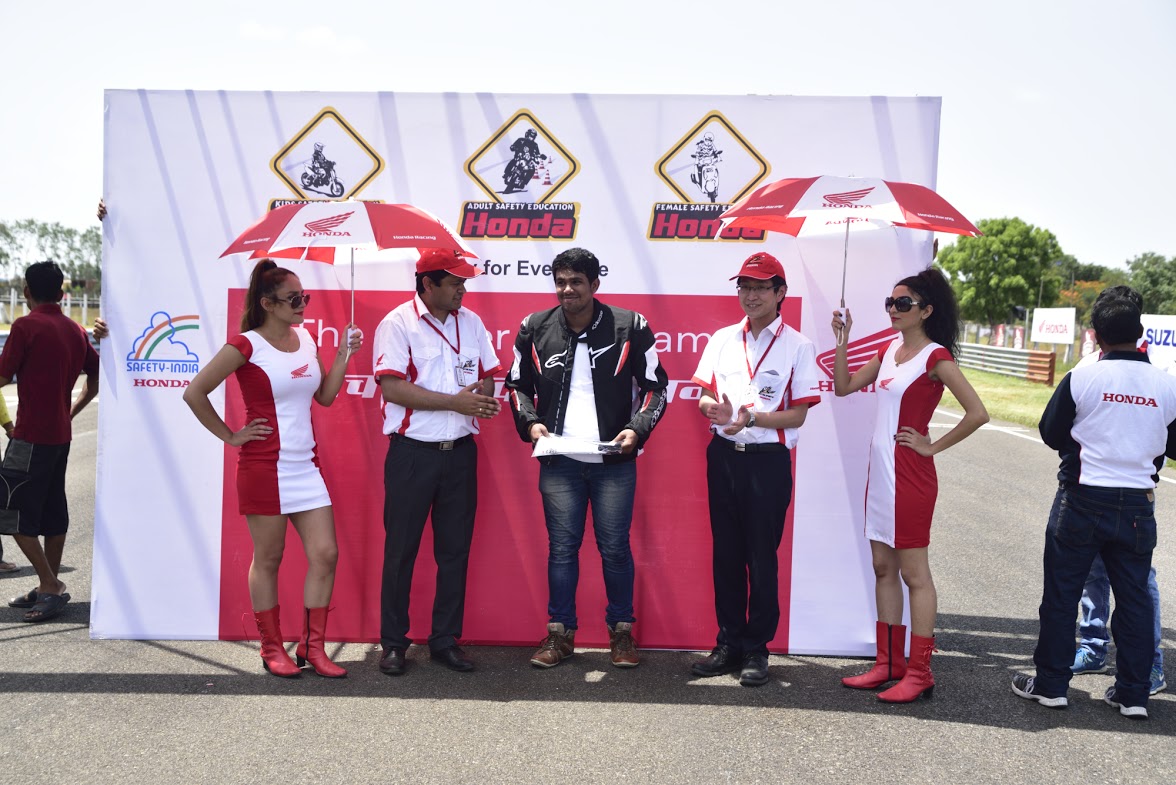 Speaking at the occasion, Keita Muramatsu, President & CEO, HMSI, said: “Honda has been long known to promote Motorsports Culture and we believe in nurturing talent from the grass root levels.  Honda One Make Race is an apt platform to cultivate the huge riding talent that exists in this country. We are encouraged by the improvement in performance of the Indian riders in the competition. Last year three riders from India competed with the best of Asia’s riding talent in the Honda Asia Dream Cup. We look forward to more such opportunities and we have also signed MoU with Ten 10 Racing Academy for training riders over 15 years of age. We will also continue to provide all possible support and nurture youngsters.”