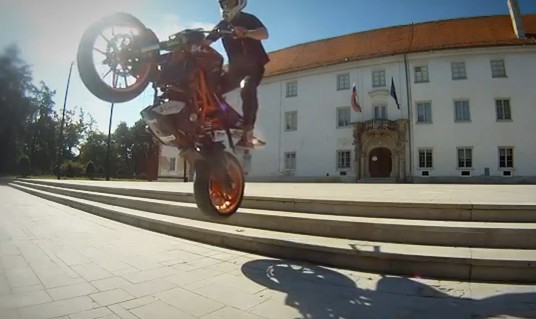 Rok is presenting his newest video project called “ when the time stops” that is filmed only with the GoPro cameras. The young Slovenian KTM factory stunt riders wants to show the inside, more detaled view in his tricks on the 15HP KTM motorcycle.

Back in the 12th century on Hungarians royal territory in the city named Murska Sobota a castle was built. Back then they had fests where they were dancing and singing on the yard outside or inside the castle. Centuries later a different kind of dance showed up. Dancing with a motorcycle. Rok Bagoros known as stunt rider with a smooth and agressive riding style shows some of his elegant moves on his bike as they did in the past with their dancing.