Devotion is a wonderful thing. It makes you submit yourself to a uni-directional path which is sacred, has your heart and your will. For devotees of the Gods of Speed, such a path which leads to any racetrack, is as holy as the steps which take you to Mecca, Jerusalem or Mount Kailash. 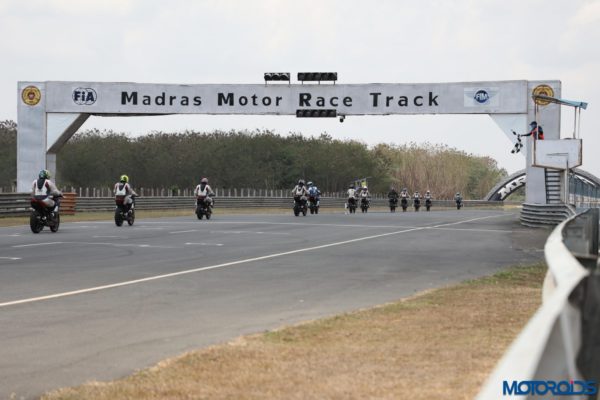 And just like most other holy sites, at a racing track too, there’s a dress code, the sweet fragrance of incense sticks is replaced with that of petrol, seriously loud holy tunes reverberate in the atmosphere and countless combustions substitute for muted candles and lamps. What’s the ritual to be performed? Circumnavigate a loop of tar and do it as fast as you can, hoping the Gods look after you and bless you with a fast lap time. 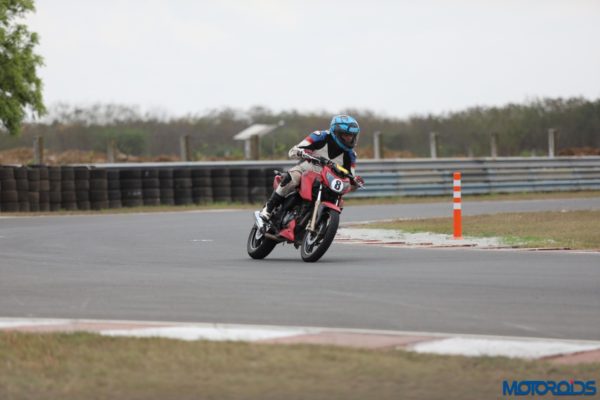 Riding a bike on the track and riding it fast is a different ballgame though. In order to stitch a decent lap together, you need to know the layout, the fastest line you need to stick to, braking points, the bike’s delivery and handling characteristics, and before everything else, the basic mannerisms to be followed before you can be ready to exit the pit lane. Courtesy of TVS Racing, we were provided with an opportunity to become a part of their young media racer programme, which intends to transform us auto journos into better riders. The programme includes a day of training and on track practice, which will be followed by a full racing season that will run alongside the INRC. However, in order to become better, one needs to learn. And where does the learning happen? Inside the classroom. 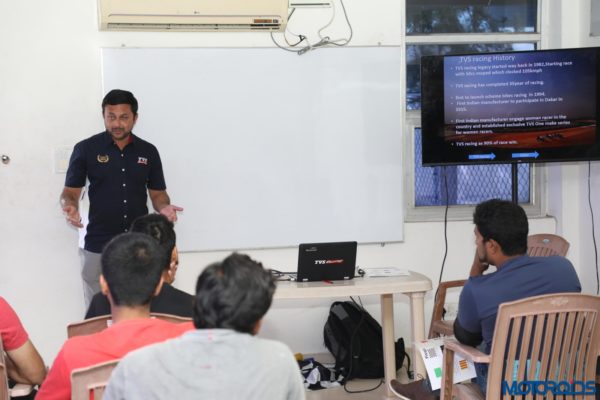 One of our teachers, guides and mentors for the day was Eight-time National Champion and the first Indian to win at the Asian Road Racing Series – Jagan Kumar. Accompanying him was a seasoned Harry Sylvester, young prodigy KY Ahmed and former racer S.Kannan. All of them proper demons on the track and surprisingly humble in person. 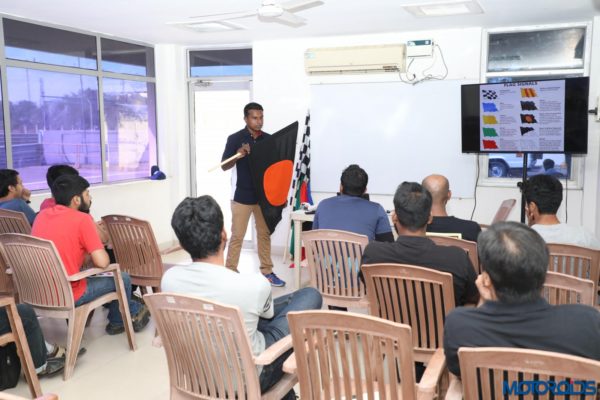 The very first lesson was about track etiquettes and flag rules, which if you fail to adhere, a sniper from the Race Control watchtower takes an aim and shoots you down – Mad Max style. Not really, but since racing is risky business, the rules ensure your own and the safety of others. If you don’t comply, you’ll be shown a black flag, which only means one thing – Disqualification. 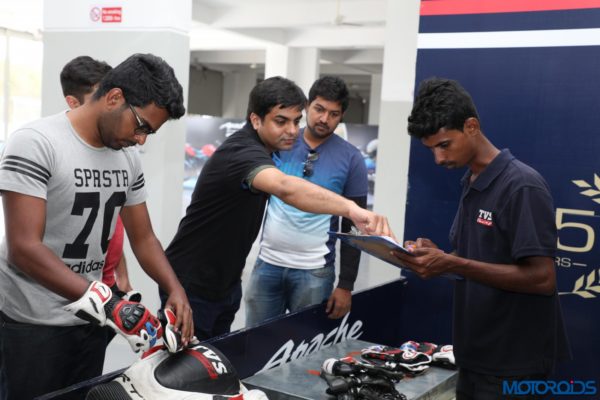 After acquainting a bunch of eager beavers with the basic etiquettes, it was time for some serious learning. We were taught how the lower body must be used to steer the bike unless you wish to wear yourself out in no time, how the knees must tightly hug the bike in a straight line, how the one that’s on the outside must be used to anchor yourself on the bike around corners, and how your hands must hold the bars like it’s some delicate cotton candy. 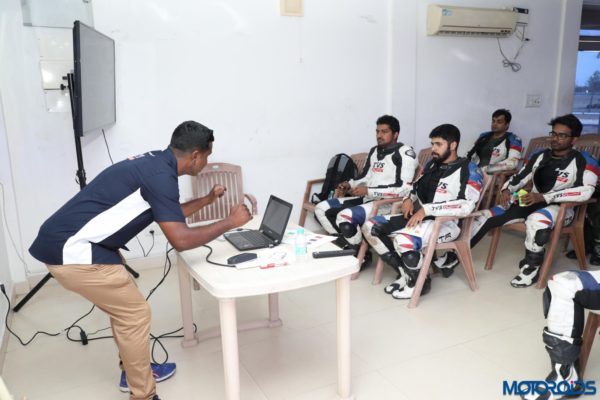 The universally accepted technique of placing the balls of your feet on the pegs at all times, unless shifting or braking, was introduced. How your heels must stay in contact with the guards whilst tackling a curve and how braking must be mostly front biased since the rear tyre is unloaded during braking anyways. You may use it to slide the bike to achieve a desired angle of entry, but that’s Tier 3 or maybe 4 stuff. 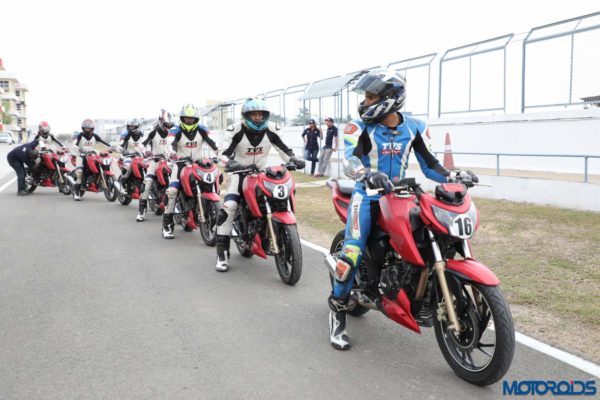 The first classroom session was done with and it was time to suit up and head out on our carburetted, race-spec TVS RTR 200s to get ourselves acquainted with the track. The bike is pretty bog standard, except for a race-spec exhaust system and deletion of bits like the main stand, mirrors and the rear fender. Split into two groups, every rider would follow their leader (One of TVS’ Champion Racers) for a lap, who’d show them where the marshal posts are and we had to do that in 4th gear, without touching the brakes. 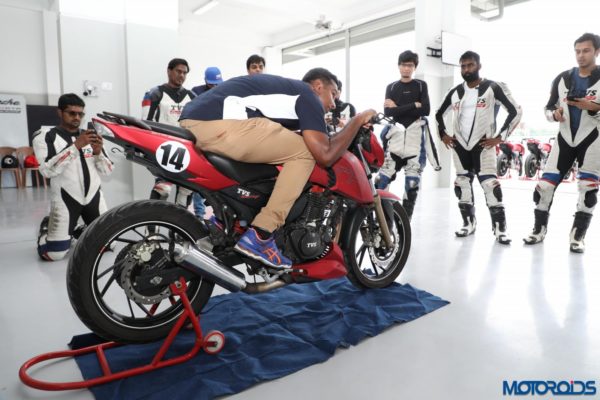 Post that session, we were back in the pits where Harry demonstrated how your body must be ideally positioned on the bike, which will help you to go faster and stay stronger for longer on a bike while on a track. 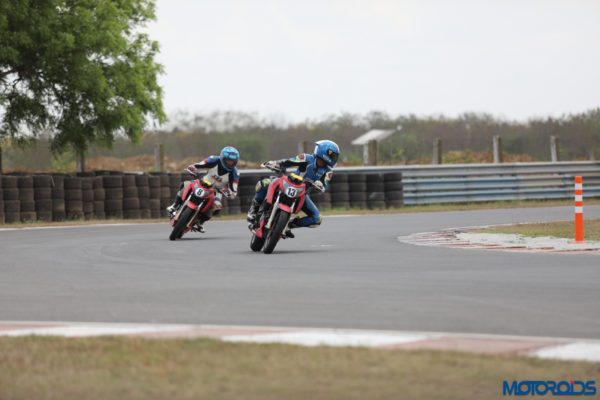 With that done, we were back on the track with our bikes, this time to learn the correct line and to follow the leader using 3rd and 4th gear only. No touching the brakes still. Fairly acquainted with the track layout by now, I was following Jagan at what I thought was a decent pace. He then gave me a reality check and surprised me with his skills by leaning his neck back and placing one hand on his knees to check my position, while he was himself leaned over, mid-corner! 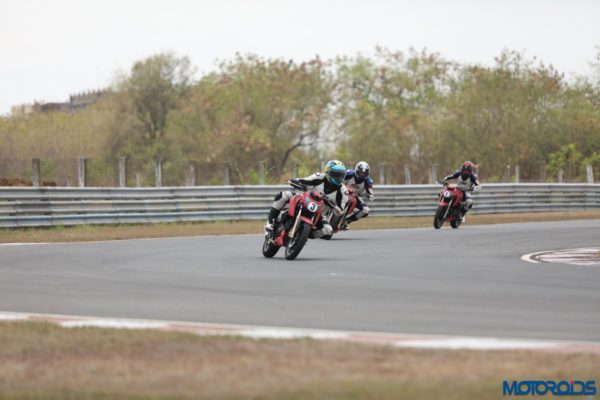 At the end of the lap, I was to move aside and let the field behind pass through, for them to learn from the champ. But since the field was too far back, Jagan waved and asked me to go explore on my own. Which is when I realised how underprepared a normal human and his everyday body is on a motorcycle, when you throw it around a race track, trying to go even decently fast. Whoever thought motor racing isn’t a physical sport, they can go eat their words. 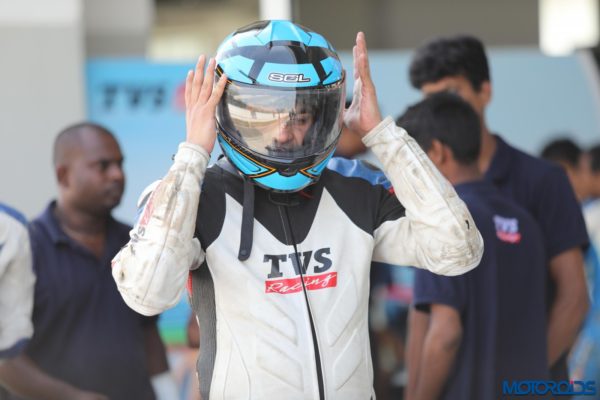 Trying to imbibe all the classroom learning in the real world, I tried stitching five fast laps together. But that was ‘fast’ only in my own Universe because I was still braking earlier than I should’ve, carrying probably just 2/3rd of the speed through corners and sweating rivers inside the leather suit on a muggy day in Chennai. 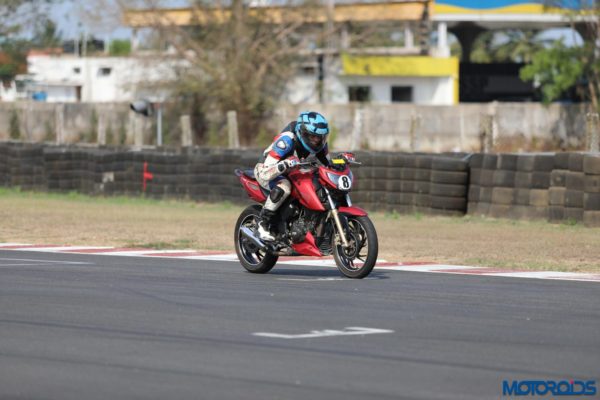 The fact that I had swung a leg over a motorcycle after about more than a year wasn’t helping matters either. I was the first to enter the pits after that stint, almost consumed and with a fair amount of strain in my neck and torso. Cursing my vices and lack of attention towards a fitness routine, I was gulping down fluids in litres, within minutes. 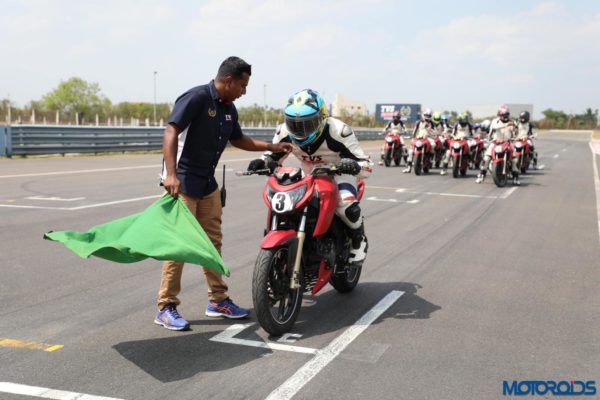 Up next was a ‘Race Start’ practice session where we were taught how you lean over the bars to keep the front wheel on terra firma, build up revs, hold the front brake, and the clutch near its biting point, dumping everything once the red lights go out. Mastering the act is difficult since the bike either wheelies or you end up rolling off and losing time, position and momentum. On a bad day, one could even stall the bike. 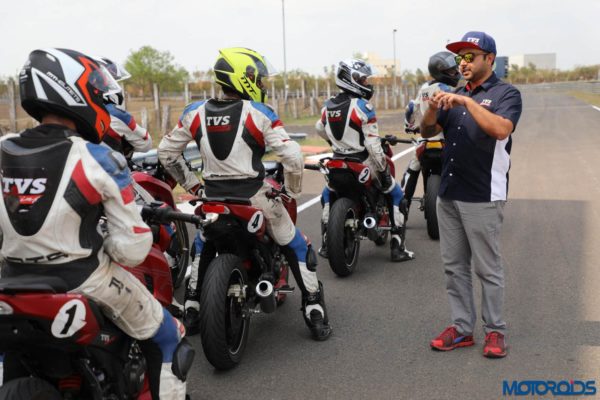 Since all of us were used to riding a bike on the streets, when it was time to upshift, the natural instinct was to roll off, pull in the clutch, shift and wring it again. Kannan then stepped in to tell us that this will lead to everyone else passing us by like we were at a standstill on the straights. He then asked us to keep it pinned and slip the clutch only slightly while we upshift, which as a matter of fact, did make a World of a difference and helped maintain momentum. One may try clutchless upshifts, but that takes practice too. 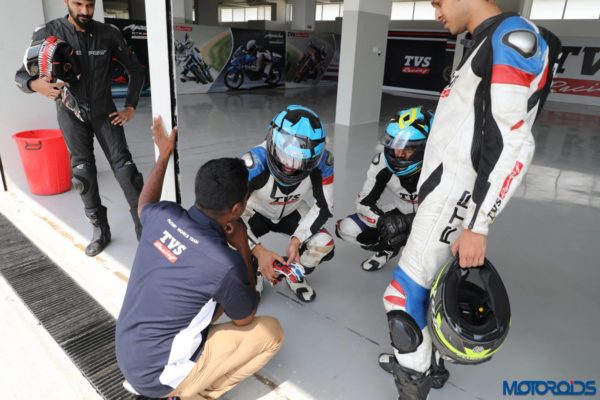 By this time, the heat was taking a toll on my smoke and lager filled body, affecting my concentration and strength. They say you need to go faster with each passing lap, braking later, holding the throttle for longer and chipping away time from the sheets. However, during the practice session which was towards the end of the day, my progress was travelling in the opposite direction. 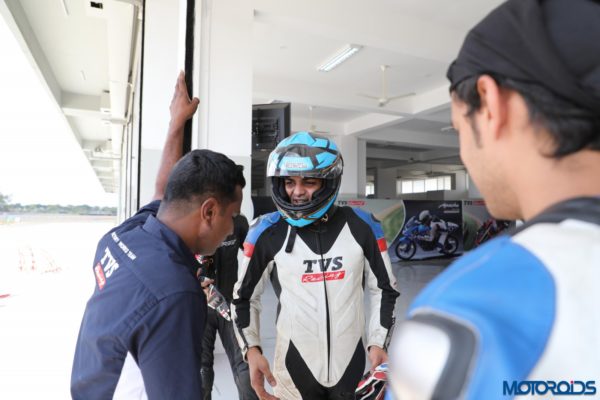 After about 6 laps or so, I was back in the pits and exhausted. Which is also when I made myself a promise to start exercising and become fitter. Honest to God, I have been cycling 15 km a day and trying seriously hard to stay away from unhealthy food and habits since then. Talk about Motorcycling turning you into a better person. I am the proof. 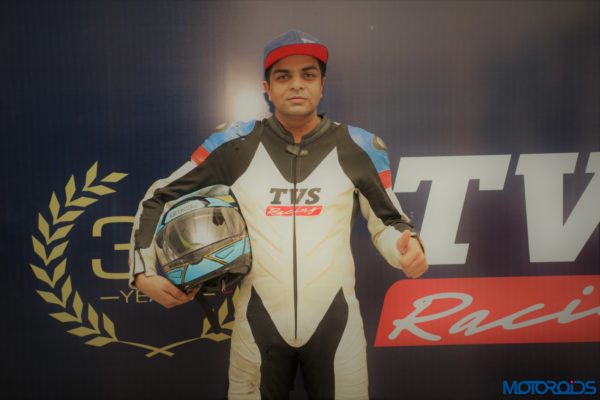 I’ve got a month or so to go back stronger for the racing season which kicks off on the 8th of June. And for initiating this change in habits and personality which I had been sitting on for such a long time and for this opportunity, I’ve only got the entire TVS Racing team, their jovial pit mechanics and their 35-year long grit to glory story which they so believe in, to thank for. 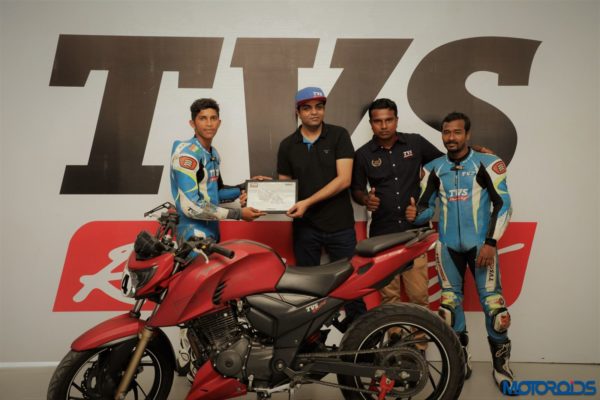 Love of any kind calls for devotion and discipline. If you’ve ever loved motorcycles, get in a decent enough shape and although the ones in our country are far and few, do ride a motorcycle on the track, once in your lifetime at least.  The experience is guaranteed to bring you closer to these wonderful machines we call motorcycles and to all those higher powers which govern the world of motoring.