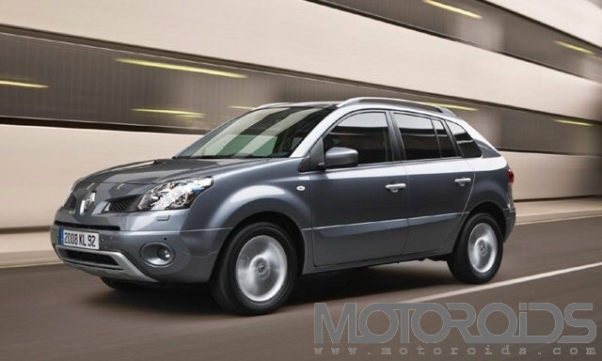 Renault is a sleeping giant, on the verge of waking up from its slumber in India. We told you about the company’s plan to roll out a wide range of its vehicles in India by 2014, including the Fluence sedan (Click on the link to read about the car). The company plans to strengthen its dealer and service network in India before it introduces its new vehicles. If everything goes as per the plan, an extensive distribution network through the country will be completed before August 2012. Renault plans to cover a minimum of 35 cities.

According to Renault’s strategy, the next vehicle to be introduced in the Indian market after the Fluence sedan will be the Koleos crossover. Koleos is a compact SUV or crossover which is targeted primarily at the urban audience, who do a bit of off-roading as well during holidays. Like most urban compact SUVs the Koleos offers the handling, comfort and refinement of a car with SUV-ish looks and reasonable off-roading capability. The Koleos comes with a switchable AWD, so that you can switch from AWD to 2 WD when you are driving on smooth tarmac and switch back to AWD as you hit the mud.  The Koleos also comes equipped with some nice off-roading goodies such as Hill-descent control.

Koleos is Renault’s first attempt at an SUV or a 4×4 crossover. The vehicle was designed by Renault, but was developed in collaboration with Nissan. Renault manufactures the Koleos with South Korea based automaker Samsung Motors in a plant based in Busan. The car, when introduced in India will be assembled / manufactured at the newly built Renault-Nissan plant in Chennai.

The Koleos is powered by a variety of engines internationally. The petrol option is a 2.5-litre naturally aspirated four-cylinder mill producing 170PS of power and capable of a 0-100km/h sprint in under 10 seconds.

However, as everyone knows, the more apt engine option for India would be a diesel. The Koleos comes with a 2.0-litre diesel engine in two different states of tune. The first version produces 150PS of power. The second, more powerful version dishes out 170OPS of peak power and 360 Nm of twisting force.

Visually, the Koleos is an average looking car at best. Usually the Renaults and the Citroens (French cars) of the world have some design flair to them to twist heads. The Koleos, however isn’t as blessed aesthetically. The oversized headlamps and the sharply angled rear windscreen don’t bide too well for the overall aesthetics. It’s still a reasonably good looking car though, if not a stunner.

From the inside, the Koleos is known to be a well put together car with good quality plastics used all around. However, the positioning of buttons and their rather high number is something which is somewhat a common complaint. The stereo controls, for example are placed behind the steering wheel – not something that cannot be managed, but definitely needs some getting used to.

Boot space is a generous at 450 liter, and extends to 1380 litre once you fold the rear seats flat. The equipment level is decent too. The range-topping Privilège model offers leather, satellite navigation and a great sounding stereo.

The Kaleos’ handling is reported to be slightly on the softer side, with loads of body roll and a vague steering feel.  However, the soft setup is reported to cushion the occupants from bumps rather well. It’s quite capable off the road too with great ground clearance and and good traction. Although not as refined or as capable as its international rivals such as the Honda CR-V, the Ford Kuga and the VW Tiguan, the Koleos still has made a strong point for itself internationally as a value offering and is a laudable first effort by Renault at an crossover.
The Koleos is expected to hit the Indian roads by Mid-2011 and will be priced in the region of Rs 17-18lakh.