Volkswagen earlier surprised us all with the announcement of Polo-Cup for India. The single-make race series will take place between May and December this year. The Race Polo was displayed at the Auto Expo along with the Polo earlier this year. This one of a kind race will prove beneficial to the brand as well as the budding Schumachers in the country. Some of the Indian drivers like Ashwin Sunder and Aditya Patel have already experienced the championship in Europe though.
It is the first time something like this is happening. We have seen open-wheel series but this is something new and more special.
The drivers for the Polo-Cup were selected by a team of 8 people which incuded one driver selector and coach from Germany Polo Cup, two Indian driver coaches (from Volkswagen & JK Tyre) and one FMSCI representative, and some of the big names from Indian Motorsports like Akbar Ebrahim, Farhan Vora, and  Rayomand Banerji. Over 1100 aspiring drivers tried their luck, out of which 20 got lucky. Strict rules made sure that only the best of the lot get to race. The selection process started in March and ended mid-May. The enterants were divided in two groups- experienced racers and first-timers. Two rounds of selection reduced the number from 1100 to just 45. Two more rounds of selection, first being a go-karting session followed by another round where the narrowed down drivers were given a chance to drive the Race Polo. The 20 drivers who have made it to the final list will be participating in their first event in Pune on 30th of May after their usual 2 day practice and qualify sessions. The next five races will take place in Chennai and Coimbatore.

Following is the final list of drivers for the race-

Race Polo will use a 1.6-liter R4 common rail diesel (CRD) engine which flatouts at 180kmph. This track-only car will be shod with race-only JK Tyres. A roll cage, race-spec suspension, stripped-out interiors will make it a proper race car.
Polo Cup India which started as a tiny idea in October 2008, has finally materialised and India will witness one of the world-class race series as the Polo Cup debuts this month. 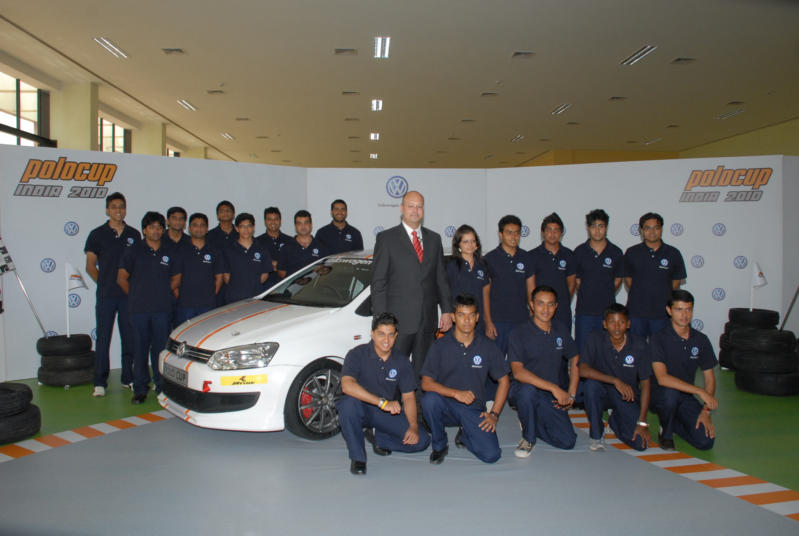 The schedule and other details will be available soon.