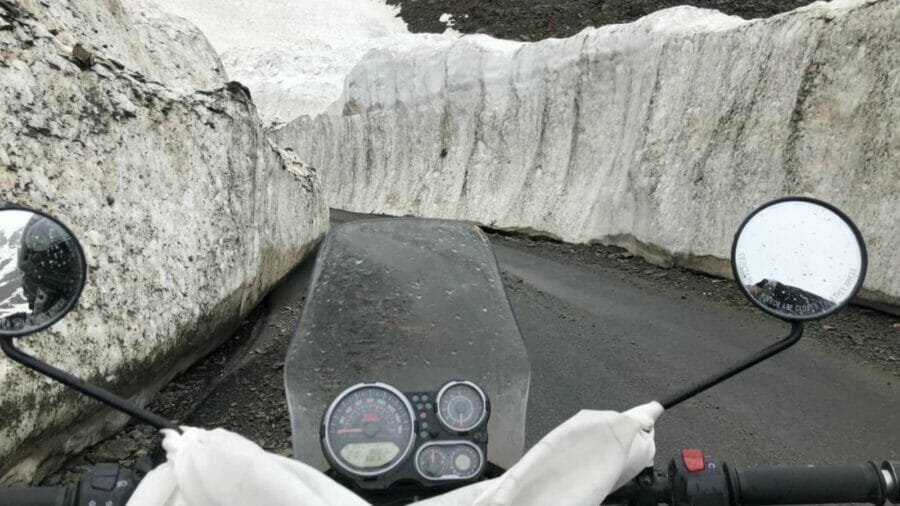 Hunder is a fantastic place to absolutely unwind your core. Our campsite was at the base of a cliff and had a tiny stream running through it. The water that runs is so pure that it is used for drinking without even purifying. Locals are extremely cordial and always ready to help if needed. I was hoping to catch a star dotted sky late at night as I had done during my last stay here, a few years back. However, I wasn’t lucky this time around, thanks to rain clouds. But I did manage to catch the Moon and took a few shots of the camp using the Night Mode on the OnePlus 7 Pro. A hot dinner, conversations later we all crashed. 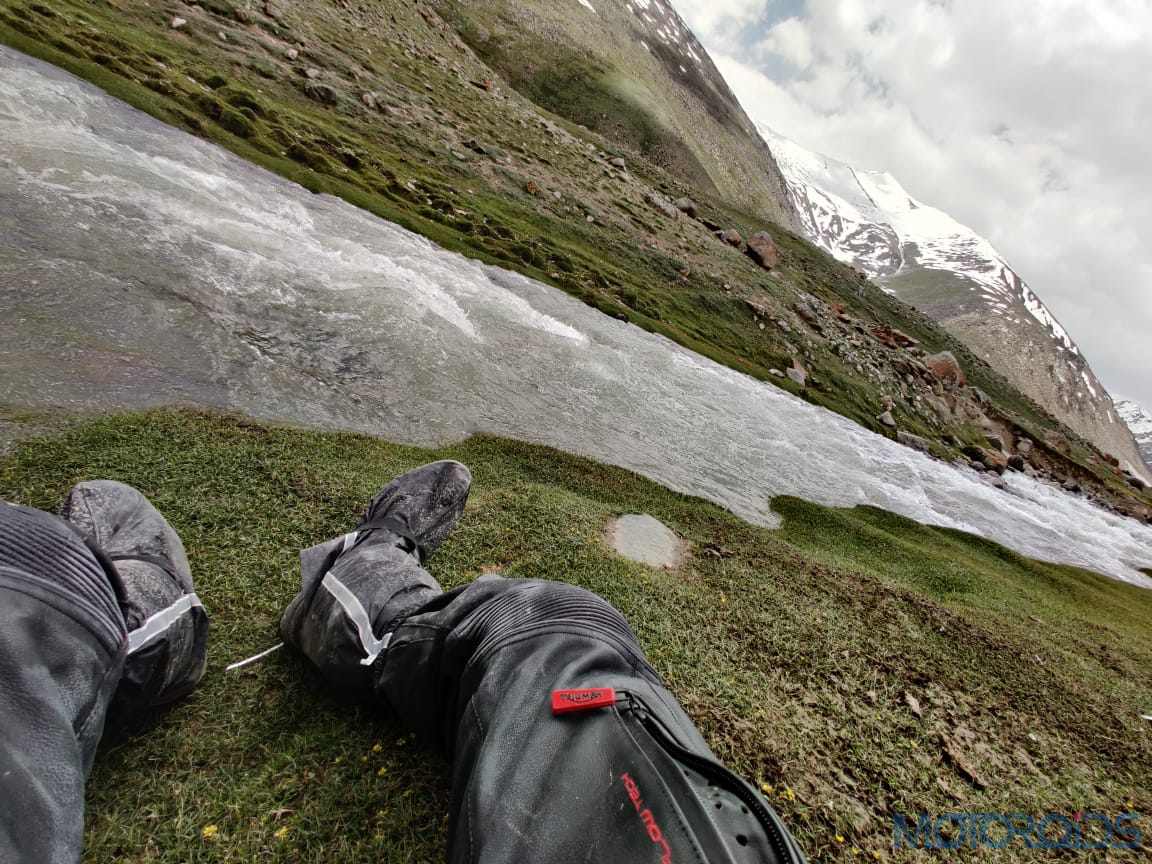 Morning came swiftly and we were adequately recharged, the tricky bit now was to shower in the biting cold. Which I reluctantly did, then geared up, ready for our morning briefing. During which we were told that the roads were mostly in good condition but we may encounter a few water crossings. Hence we had to leave on time, or else the Sun would melt more ice, and let loose more water than we would be able to handle on our bikes. 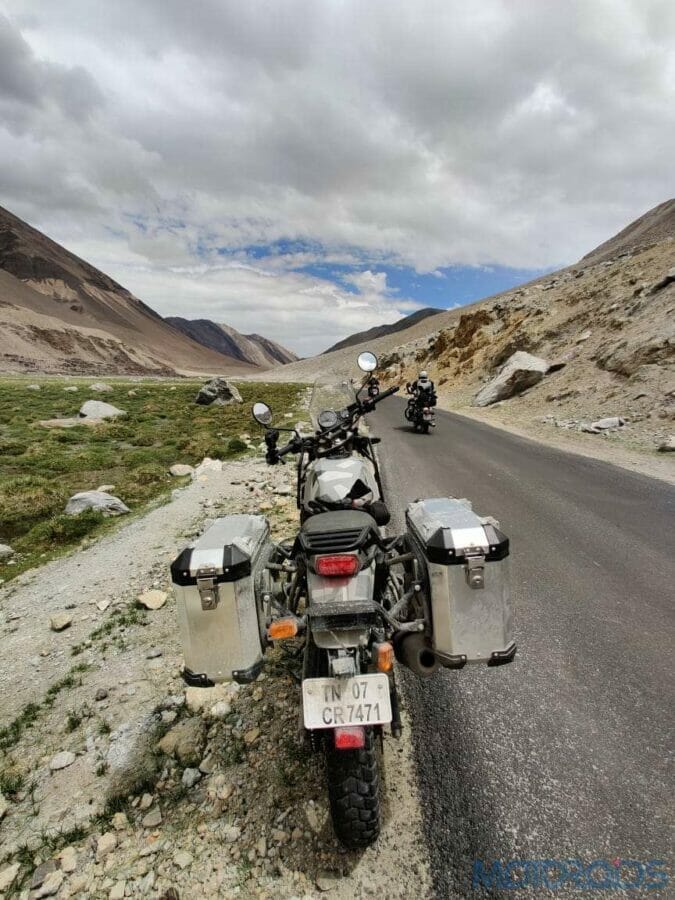 Talking of which, there was a host of it to feast on. While I rode the kitted out Himalayan(Sleet Edition) with the Panniers, I was smitten by the three Interceptors that were a part of the ride. Such a lovely exhaust note and a truly beautiful bike to look at.

Our route today would take us from Hunder through Diskit – Khalsar, Shyok – Durbuk intoSpangmik and finally to Pangong Tso. Camp to camp our journey would be 173km across, which would sound like an effortless endeavour on a normal day. But this was the north, where high altitude and lower Oxygen levels can get the better of you if you aren’t careful. By the time we reach Pangong Tso, we would have gained 4270 feet of altitude, as we leave Hunder at 10,000 feet and reach our destination situated at 14,270 feet. 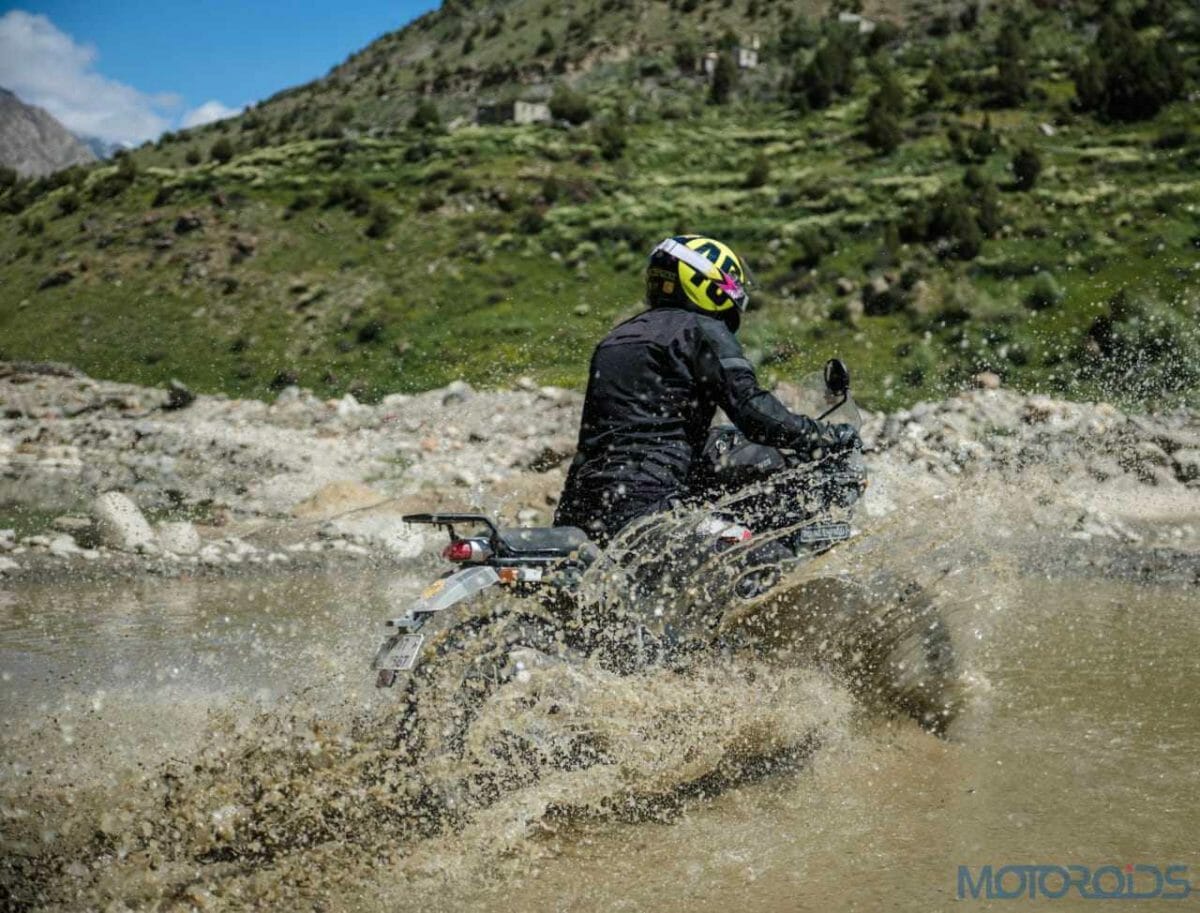 Our first regroup point was at Durbuk, situated 122km away. Which meant we had quite a bit of riding to do across a mountain pass, plains, rock and gravel. Not to mention, the sharp inclines, drops, sharp rocks, misshapen rocks, beautiful rocks, all kinds of rocks. On which we would be riding. Right. That we could see and had prepared ourselves for, however, it was the water crossings that got nastier every time we crossed one. The Sun was melting the ice faster and that meant, water gushed through with more excitement than usual. We had to be extremely careful. I prefer standing and riding through water and managed to cross without breaking any bones. Whenever I spot a water crossing, excitement and fear both fill my belly. 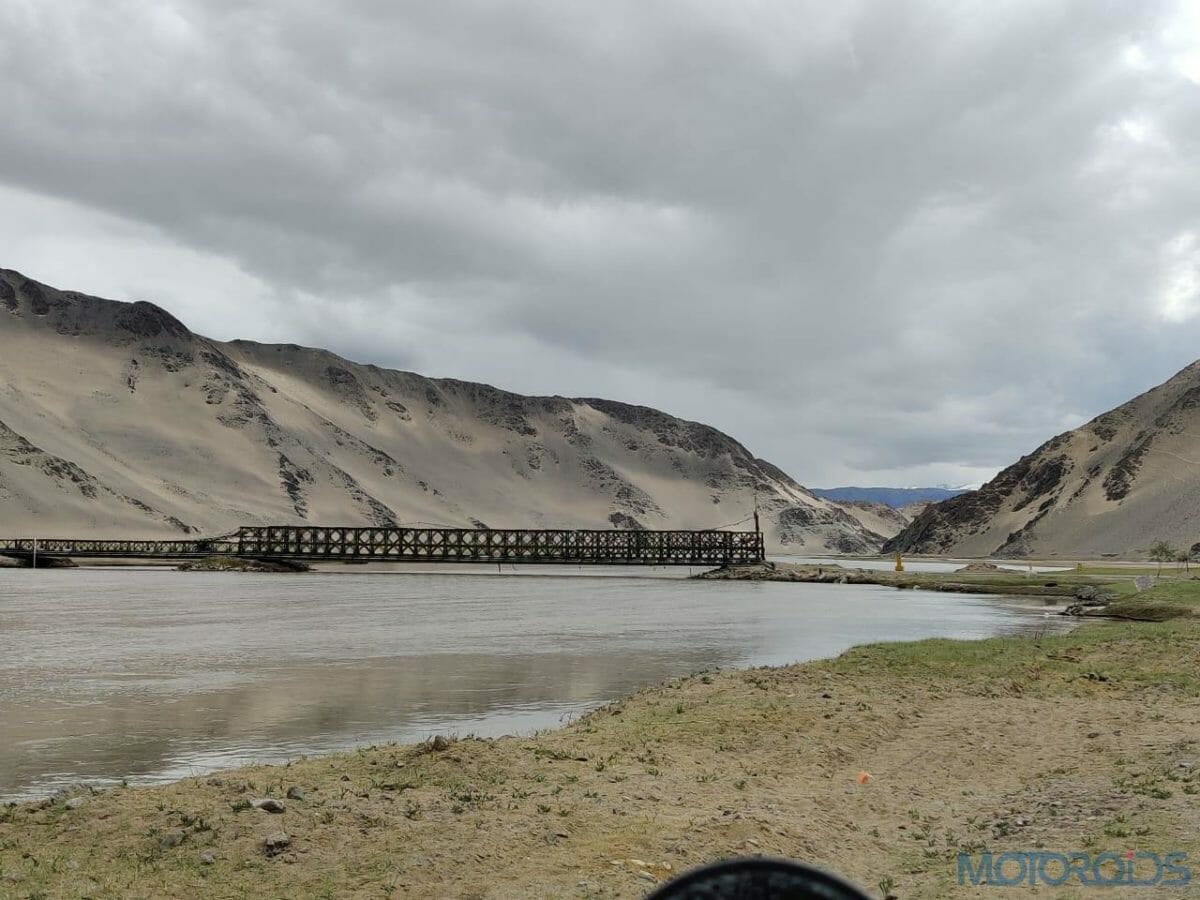 The Shyok river will give you company for the most part of the ride, which is great both for photography and to just sit, take a break and gawk at it in awe. We rode on till something literally made us stop dead on our tracks. It was the first view of the staggering PangongLake and what a sight it was. One view of it and wanted to reach it in a hurry. Don’t though, keep safety as your number one priority and you’ll reach your destination in one piece.

We crossed the patch where a scene from the movie ‘3 Idiots’ was shot, no wonder it has turned into a tourist destination with the scooter placed for photography and even the enlarged butt chairs in various colours making their presence felt. We eventually rolled into hundred Sky Camp’ to call it day. But I just couldn’t retire myself yet, before touching the waters of Pangong Lake. I decided to take a walk, let the bike rest a bit and boy the sight of it, just melts your senses in more ways than you can imagine. My suggestion would be, spend minimal time in taking pictures and just simply enjoy the state of being there.

At The Remote End Of Remote – Hanle 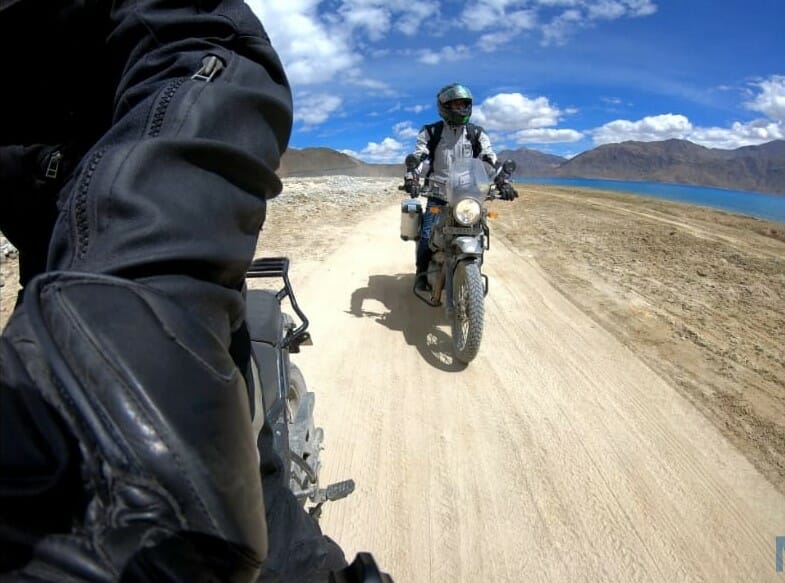 I thought the ride from Hunder to Pangong Tso was fairly tough but we had a whole new challenge lined up for today. We were told that the route that would take us from Pangong Tso to Hanle would be mostly off-road, lined with a lot of water crossings. Roughly 162km ahead would be our campsite in Hanle. This had to be one of the most riveting routes I had ever ridden on. Most of the stretch in the first 60 odd km will have you ride right next to Pangong Lake. It is hard to put it in words, but it was a deeply enriching experience. Be mindful though, while you stare at the lake, keep a tight eye on the off-road ahead, some water crossings come without warning and so do puddles, the depth of which would be hard to gauge until you take the plunge. There are patches of sand too, which go deep at places and your bike will stall if you don’t handle it tactfully. While I managed to cross all of the scary water crossings without a fuss, I did take a fall in the sand section, albeit at minimal speed. The panniers helped save my legs and I rode off without hurting my skin. 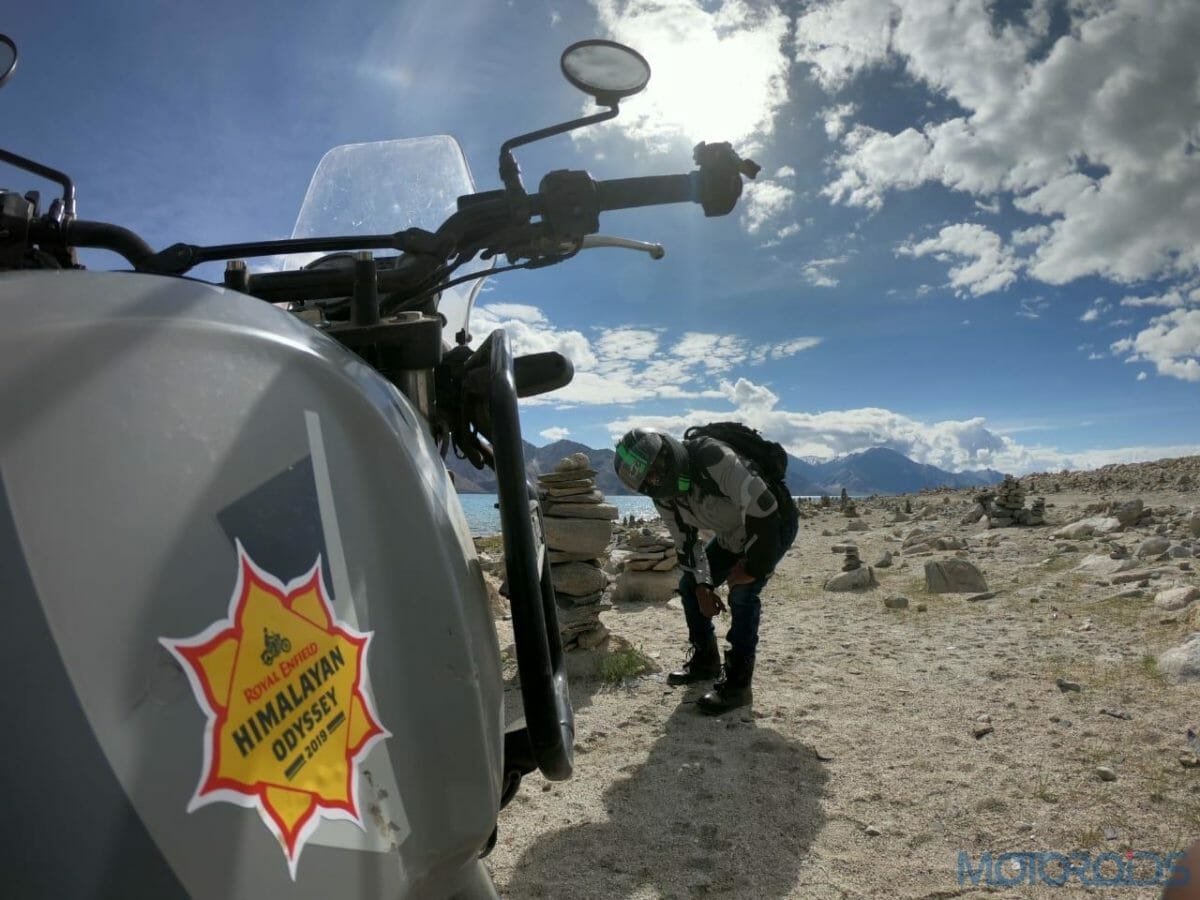 Enroute to Hanle you will cross some truly tiny yet truly heart touches patches of human settlements. Here I stopped for water and food and just a simple conversation with the locals brightened my day up even more. Man, Merak, Chulshul village, were dealt with and I reached the check post at Loma. Take the left here and you will reach Hanle, take the right and it will take you to Tso Kar, which we would leave for the next morning. Hanle is situated at an even higher altitude as compared to Pangong Tso at 14,764ft. You’ll have to keep hydrated and snack up to reach without pulling your hair out. Take frequent breaks, stretch those limbs. Yet nothing can prepare for the uncertain weather conditions, which was about to turn our ride on its head. 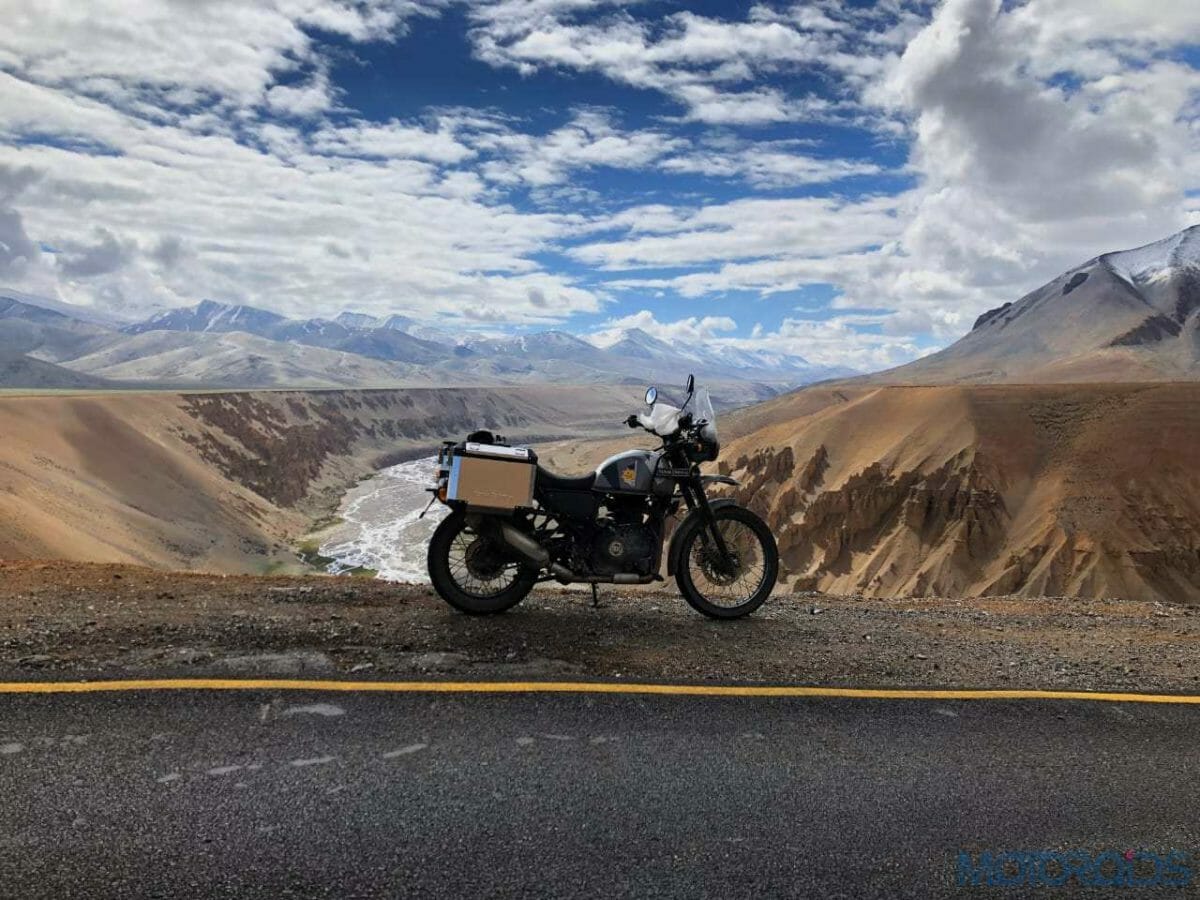 I was riding quite gleefully, thanks to the stunning tarmac roads after Loma pass that winded through meadows and mountains alike. The sun was out, all was good. Until the rain gods showed up. It suddenly started pouring, and the water was really chilly. Hitting you like pebbles darting at you, at speed. I had to slow down a bit. Then the rains turned apocalyptic. I could barely manage 30km/h on the Himalayan, keeping safety in mind. The funny bit is that at a distance I could see the sunshine through the clouds but it was raining furiously here. That continued till the time we reached our camps, all of us were extremely exhausted and that fall I had taken on the sand section was making its presence felt on my glutes. Time to have a chat with the doc. But not before I get rid of my wet socks. 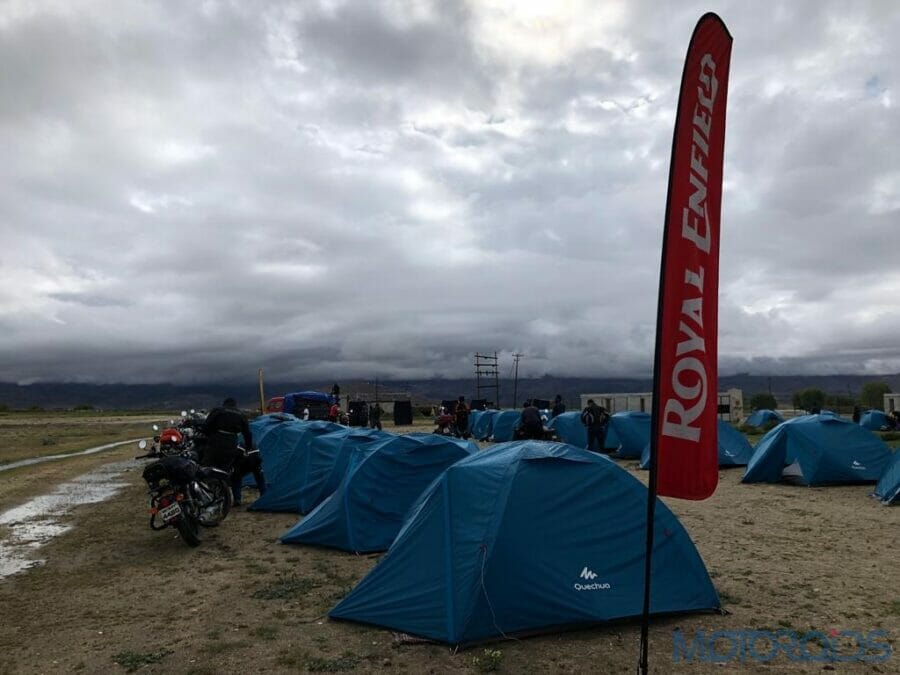 A painkiller and a warm cup of tea later, we changed and got into warm clothes. Oh, it still hadn’t stopped raining, so there would be no photography opportunities this evening. Only thundershowers and more conversations. I dragged the blanket over myself and crashed into the night. Only to find out that it was still raining as I woke up in the morning. The tents were tiny, barely able to fit you, hence gearing up and crawling out was difficult, so was trying to take a leak in the cold, wind chill conditions, decorated with ice melting water droplets. Do you get the drift? Chill I mean? 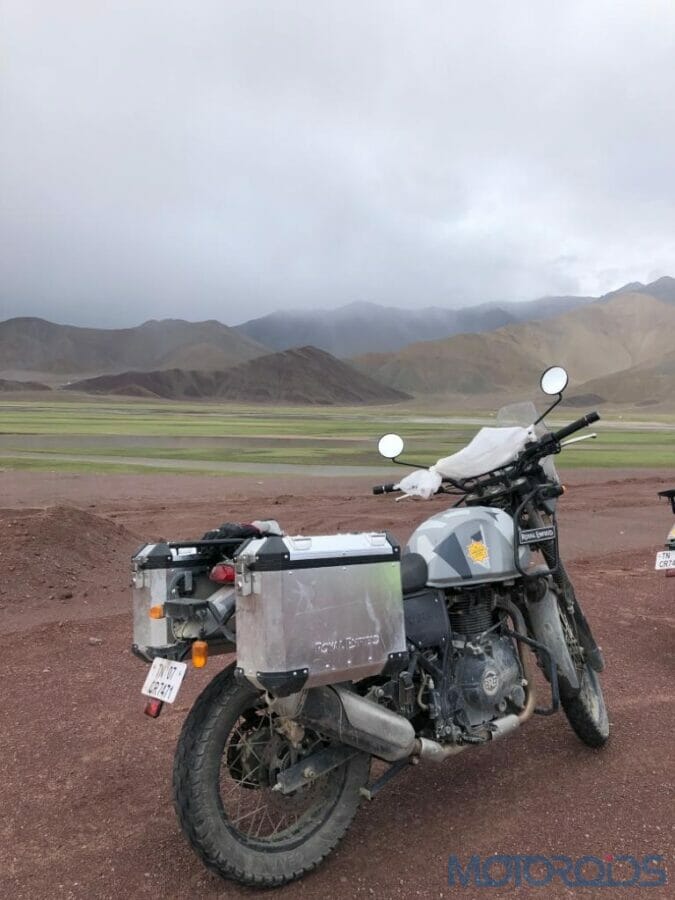 I wanted to get out of here, quick, in search of sunlight, towards Tso Kar, which was 154 km away. As I pondered, it started drizzling again and then I saw something I had never seen before. Three rainbows at the same time. And at the distance, the Indian AstronomicalObservatory situated over a peak. Which I totally missed spotting last evening. 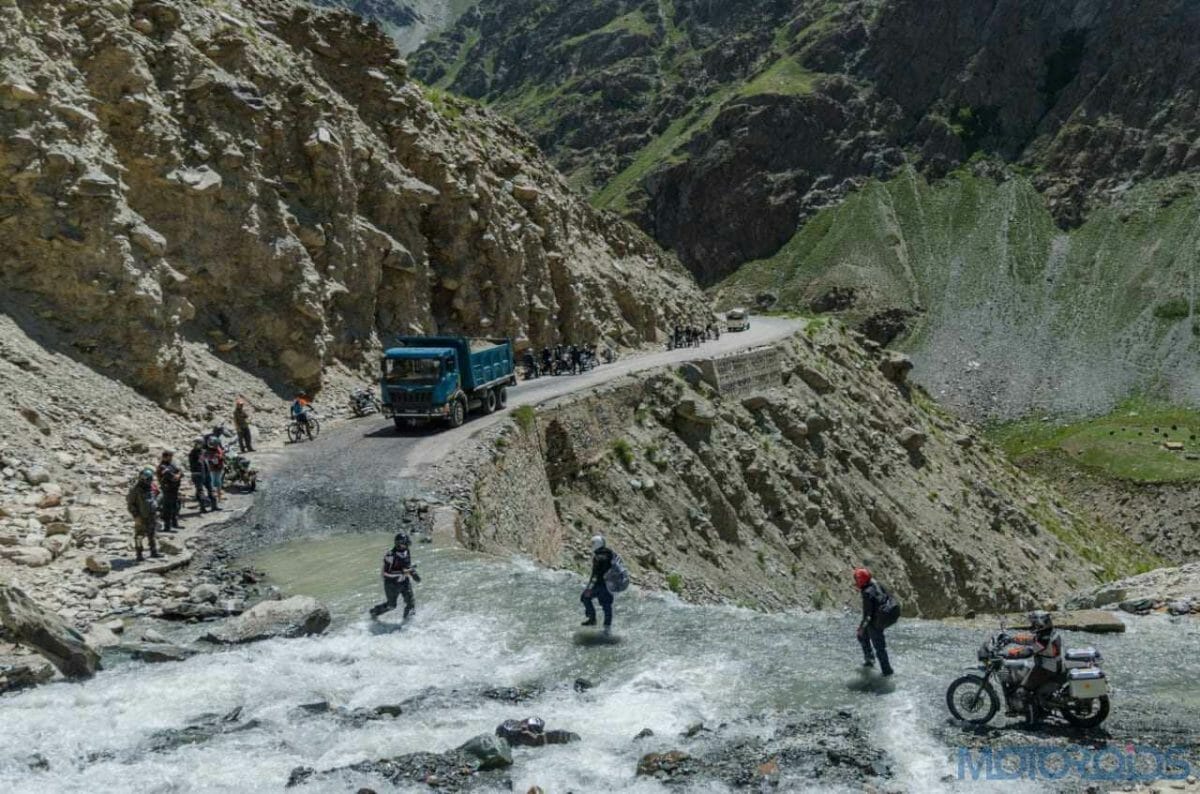 We started off, wearily, after a not so good night’s sleep. The only saving grace was the roads. Beautiful, end to end, at least till the Loma check post. Post which it slowly disappeared and we were back to gravel conditions. This was also the day where most within the group were lost for directions, due to which we lost out on time. You could make it up over the vast stretches of battered rock, some fairly high-speed off-roading will bring a smile on your face, it certainly did to mine. It was a welcome sight at Tso Kar, with horses smiling back at us and warm food and tea waiting to be devoured and sipped on. The rains continued through the night and into the morning, which meant I could only manage a handful of shots before leaving for Keylong, which would be the longest stretch we would do in a single day on this trip, 230km to be exact. 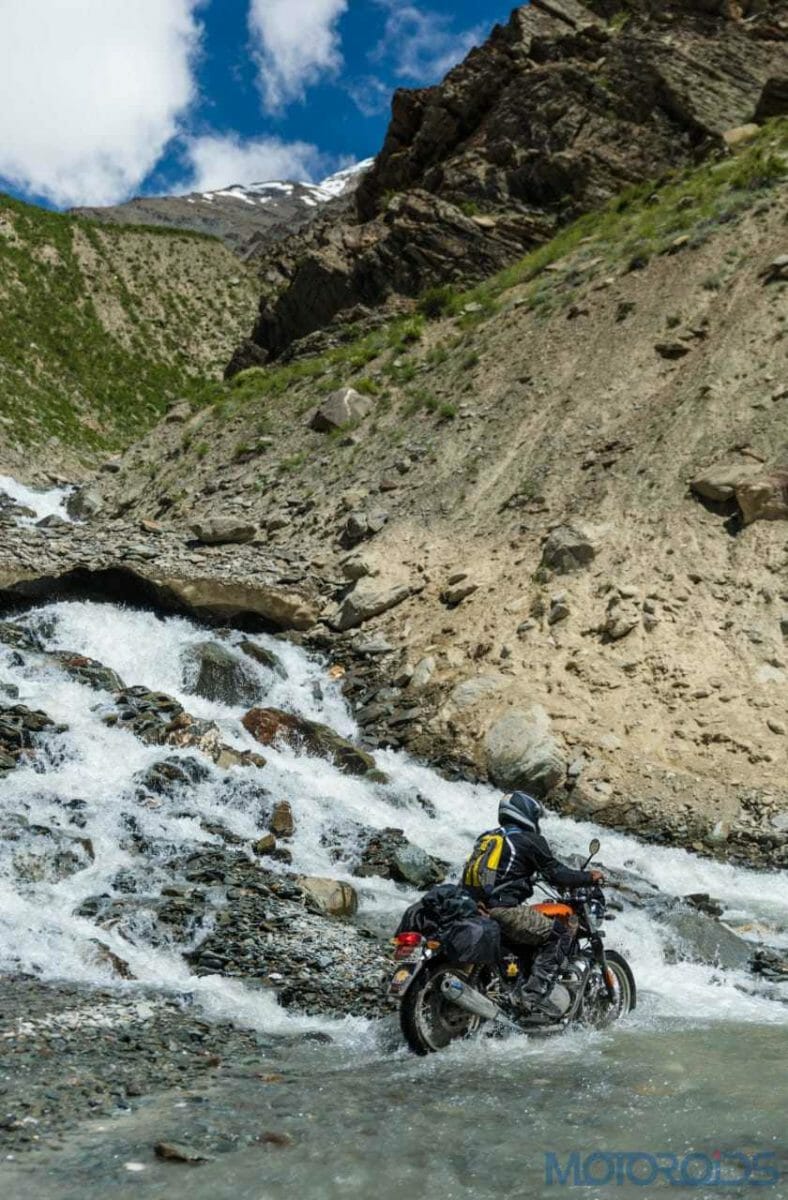 Treacherous would be an understatement if I had to call this stretch that way. On the way to Keylong, we encountered the most notorious water crossings, while it rained incessantly. The tough bit for me was that ice-cold water had seeped into my boots and my toes were close to turning stone if I didn’t stop and warm them. Which I did, which also meant I lost about 20 min of ride time, which meant, more water forcing down from the mountains.

I did lose hope quite a few times, but truly the bike did keep me going both literally and figuratively. It really is a fun, engaging and trustworthy companion, this RE Himalayan. Not once did it break down through my entire journey, that took me to the depths of the wild north. A couple of days later we concluded our ride in Chandigarh, but for me, the ride ended at Keylong. A place till which human intervention and our ill effects are at a bare minimum.Post that it is back to chaos and pollution and noise. 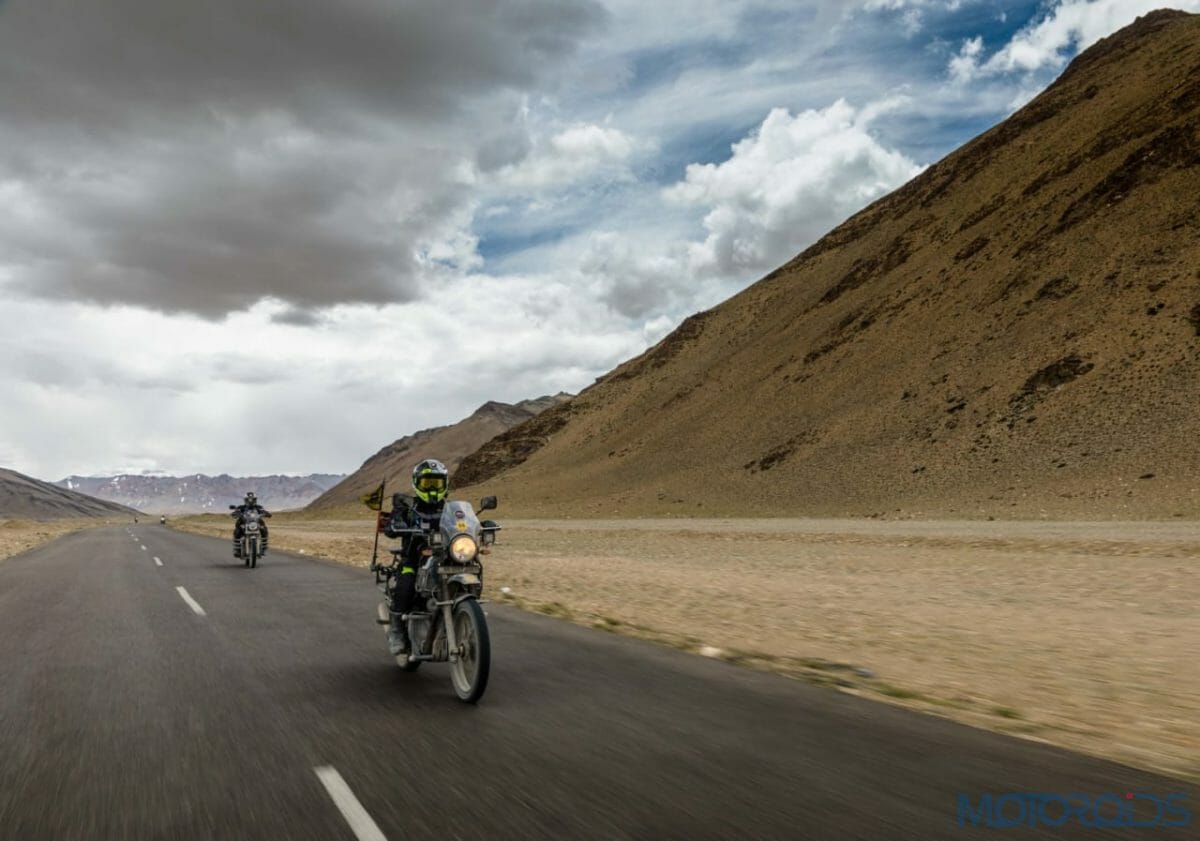 I would like to give a huge hat tip to the entire Royal Enfield team. Everyone from the ride leads – Hema and Akshay, to Arun and his excellent team that ensured all bikes kept running fine and got fixed in no time if they broke down. Arun’s team of mechanics would sit up into the late night to fix the bikes, come rain or just about anything. It is a truly commendable feat. I would also love to mention my gear which functioned flawlessly and let me capture some spectacular shots. These included the OnePlus 7 Pro and the iPhone X smartphones along with the truly badass GoPro Hero 7 and the formidable Fusion 360 camera. Until next time then. Ride safe, ride within your limits and always ride with a helmet on. If you ride with a pillion, don’t unless that person is wearing one too.