Home Features This Old Smuggler is an RE based criminal

For some time now, Bulleteer Customs have been committing the crime of dishing out some visually arresting builds and it seems that this time around, they’re just as guilty. Called the Old Smuggler, this latest build like all their previous work is based on an RE, but hardly remembers anything about its civil past. They call this artistry the blending of old school with new and nowhere is it more evident than at the rear, where a massive, low profile 240 mm section rubber graces this single saddle build. 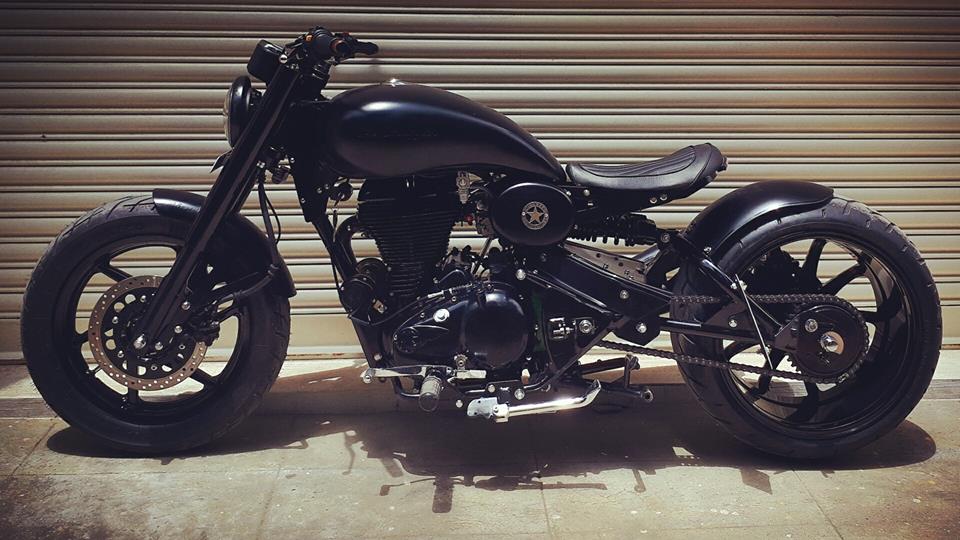 Finished in all-black, the Old Smuggler’s fuel tank follows a tear drop design which neatly flows into the well-finished saddle which sits pretty on a short sub frame, just above the rear mono shock. A thin strip of LED, side mounted licence plate, and a chopped fender go a long way in making the rear look crisp and clean. They’ve done well to fill up the gap between the motor and the tank, which otherwise does spoil aesthetics, no matter how brilliant the rest of the build. Blacked out front forks bolt on to a front disc unit and alloy wheels, whereas the almost flat handlebar looks like it has been fitted with bar-end blinkers.  Minimal yet modern additions like the front headlamp and instrument console help maintain neatness without sacrificing functionality. And just all their other builds we’ve found ourselves attracted to, this one gets all our attention.