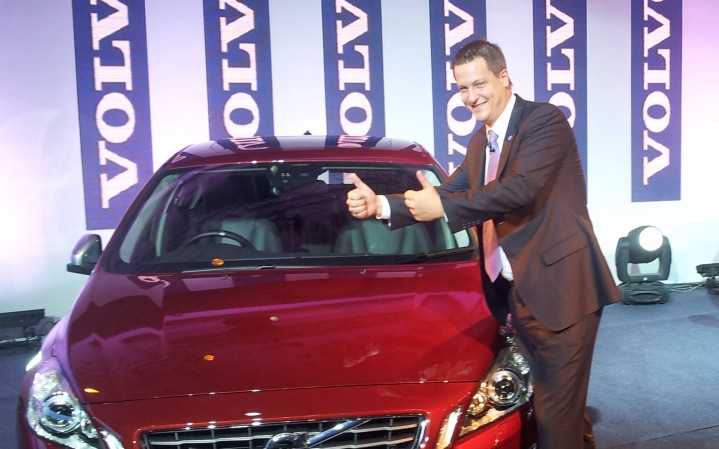 We recently went to Delhi to cover the launch of the new D3 Kinetic range of Volvo cars. The new variants are not just powered by an efficient and powerful engine that suits India, but they have been priced exceptionally well too. We were lucky enough to get some time with Volvo’s India MD Thomas Ernberg, who has taken charge only a few months back. The soft spoken, affable, yet very sharp and focused top man at Volvo India gave us an insight into what the Swedish company holds in store for the future. Here’s a transcript of his interview with a group of Indian automotive bloggers.

The pricing on the new D3 range is impressive, for how long will they last?

We decided that we had to be within a certain price segment to stay competitive. The new prices, as you said are very competitive, but we have taken a hit on our margins. We however, wanted to increase our presence. The prices may be increased slowly, as these prices are not sustainable.

What’s your growth strategy for India?

For the past couple of months, especially from September to December, we have been in discussion with a lot of working groups about what needs to be done. We want a 50% segment share of the luxury car market by 2020. This would translate to about 20,000 units. We’ll increase our presence slowly. This year we will focus on quality and competence, and deliver on our commitment of customer satisfaction. We are currently negotiating with prospective dealers across the country. It will take some time before the new dealerships are ready, and we’ll the new ones coming up in 2013. For 2012, however, the focus is on increasing customer experience in our existing dealerships.

The new V40 will be exhibited at Geneva, is that expected to come to India?

This year we will not introduce any new models, but 2013 will see new models coming to India. Can’t comment on specific models as of now though.

Will the Volvo Concept Universe make it to production?

Concept cars give you a look into the future. The Universe gives you an idea of what Volvo wants to be in future. We want to be more luxurious and compete with the best brands in the world. It’s a good reflection of what the Volvo cars may look like in the future.

Volvo ran an FB event to select the new design for the XC90 with user feedback, so which of the three options is making it to production?

I cannot comment on it right now, but there will be a new XC90 coming by 2013

By when can we expect Volvo to start its CKD operations in India?

I don’t see the CKDs coming in anytime soon. The current volumes and the projected ones also don’t do justice to assembling cars here. As we are talking of doing 20000 units annually by 2020 I don’t see any reason for bringing CKD units here for now.

Why not bring all the Volvo products to India, including the C70, and give customers more options to choose from?

Starting off with lesser models is always easier. We’ll have to see whether there is market for such models here before we actually bring them here. The problem is that the dealers will need to have to keep a lot of extra parts which will have a very low turnover in case of vehicles with low demand. In future, however, we will definitely have more models for India. Not probably all the cars, but cars which we feel will have enough demand

Styling wise Volvo has been quite staid traditionally, except for the XC60 and S60. Will the new, fresher design language translate on new cars as well?

If we look at the XC60 VS the Q5 and some of the other cars on the segment, the feedback we’ve got is that the XC60 is the most stylish and contemporary of the lot. I think the S60 also is quite exciting. I agree with you on the XC90 and the S80, but going into the future, we’ll have more exciting cars coming up.

The Polestar looks like an exciting model for India. Would it be brought here?

We are looking at bringing Polestar to car lineup in India. We have been getting queries on the model from our dealerships based on the customer feedback, so it’s definitely one of the things we are going to focus in 2012. I cannot give to the exact time when we bring it here, but the car definitely is on the cards.

I asked the same question with the people here. We have the same format for our website worldwide, so that’s the reason why the extra models are being displayed here. But you’re right, it should not be there.It will take some time as the It / tech department will have to work on the contents, but we’ll have it fixed soon.

You said that the prices of the new D3 line are not sustainable. When do we expect a hike?

Are you looking at joint marketing initiatives with Volvo Buses?

As you would know, Volvo cars and Volvo Buses are two different companies. However, we do want to leverage the brand value, as we share the same logo. I was in Volvo Buses’ India office in Bangalore last week and met the top guys there. They were very keen on working in partnerships. For example, we can have a different pricing for those who own a Volvo Bus fleet. There are a lot of opportunities and we will most definitely increase our cooperation with Volvo buses.

What will bring customers to Volvo showrooms? Is safety as a USP enough?

Safety is a must, not a USP. It’s not a criteria but a qualifier. I think that features and brand value are very important. We want to get the youth in with the S60. It’s a car for those who drive themselves. Ditto for the XC60.

What are your biggest challenges in India?

The biggest challenge in India is that we have to sell a lot more cars to get closer to the German competition. We have our own plans and strategies, but as they work out, they’ll increasingly see as a threat, and they might come up with counter offers and products. They may say ‘Volvo is selling too many D3 cars’ and this would make them come up with something with hits us in that very segment. That would be something to watch out for. Also, there will be more brands coming into India like Lexus and Infiniti, Porsche will also have a much bigger presence in India in the coming years – so the competition can be expected to rise substantially. We’ll have to take that into account while strategizing. I think you have to be on your feet all the time. You have to be very quick and very clever with your strategy. So if I say that with the new D3 I can sit down and relax, that’s not possible. It’s going to be a challenge to stay ahead of the game all the time.

What are the USP’s of Volvo over its counterparts in India?

We have features like the laser assisted braking which the competitors don’t have. Then the other features like leather upholstery and other functions, we are offering all that at a very competitive price. Our competition offers all that only in their higher specs products. So with the new D3 line, I think we have great products with lower prices, more features along with Volvo’s inherent brand qualities as an advantage.

Where does Volvo stand in terms of the cost of ownership when compared to other premium brands?

When compared with the other German brands, and this has been verified by a couple of car magazines as well, we are about 30-40 percent cheaper in terms of the price of the spares.

Has the company’s R&D been facing any challenges after Ford sold it and Geely took over?

I think the sellout has come as an advantage to us. In the past few years Alan Mullaly had only three focus points, Ford, Ford and Ford. I think he has done a fantastic job with Ford, and kept his focus. He sold JLR, Aston Martin and Volvo, helping the company keep away from distraction and improve the brand. I think it was good for Ford, and it was good for the brands which were sold. Our new owners, Geely, have understood the value of the brand, and they are giving us all the importance. They have given us more financial backing that we were not probably getting with Ford in the past couple of years. We required more money to build new models which would cost us about 2.5 billion dollars. Now with Geely, it’s all become possible. There is a complete new dynamism within the company. I’ve been with Volvo and many times we have discussed selling 400,000 to 600,000 cars, but the new target is 800,000 cars. We have a new CEO, Stefan Jacoby. He’s much focused and is increasing the accountability and decentralizing from the HQ’s. For example, I’d be fired if I don’t perform here. Last year Volvo was the fastest growing luxury car brand across the world.  Before 2020, Volvo will sure be selling 800,000 cars. Things are more exciting than ever!

Are you putting more focus in China after Geely took over?

A new entity has indeed been created for the China market. We will be investing in a new factory in China, then, one year from now there will be a second factory in China. China is going to be our No.1 market in the future. We have a sales target of 250000 units annually by 2020 in China. So yes, there is indeed a lot of focus on China.

We Volvo will come out with an X1 / Q3 competition?

You may see something coming up next year, but I can’t comment any more on that.