The Flatula Backfire could be the solution to Planet Earth’s energy crisis as well as pollution problems! Well, if only it could actually run on the source that it says.

Here’s a video that I came across on the World Wide Interweb, and it literally had our whole team in a laughter riot. You can also click here to watch the video directly on YouTube.

We all have heard about the energy crisis that will engulf our planet, at some point of time or the other. Also commomplace is the knowledge that our dependence on fossil fuels is a vicious circle. These hydrocarbons will definitely run out in the future, leaving us in the lurch for alternative sources of energy. Not only that, the use of fossil fuels aggravates our problems of pollution and global warming.

That’s where alternative sources come into prominence. Humans are on the lookout for a source that is clean, yet economical and most importantly, will sustain us for long time. 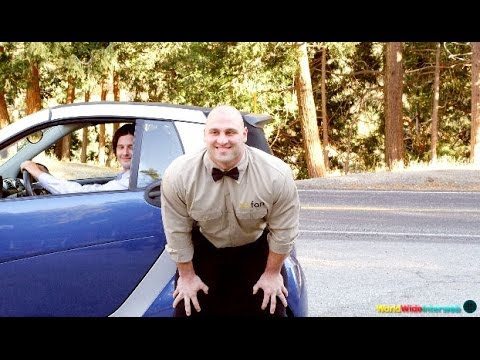 And he manages to smile while farting to recharge the car!!

What about Human Fart?? 😀

That is what the guys at World Wide Interweb are suggesting in a hilarious spoof of an advertisement. The car is subtly named as the FLATULA BACKFIRE. Not only that, a more pointed remark is made by the logo of the car. Be sure to watch the video till the end to notice the logo of the car.

The video focuses on a couple undertaking a long journey on their Flatula Backfire. As the car runs on fart and is equipped with proprietary technology that can channel human fart through the seats, the couple takes turns alternatingly to fill the vehicle’s tank.

Unfortunately, they do run out of fuel…err, fart…and need a charging station. They are not in shortage, as humans are everywhere. And the company has specially trained personnel who can recharge the Flatula Backfire to full juice in no time.

Absolutely hilarious, isn’t it? Would you really enjoy driving such a car, even if technology was able to turn this spoof into a reality in a few years time??