The ordinary and the mundane seldom sway many; it’s the outrageous that sap attention. In a country teeming with 1.3 billion people, the crazies with their outlandish creations are here to vie for some attention. We list the top five outrageously modified and documented SUVs in India. 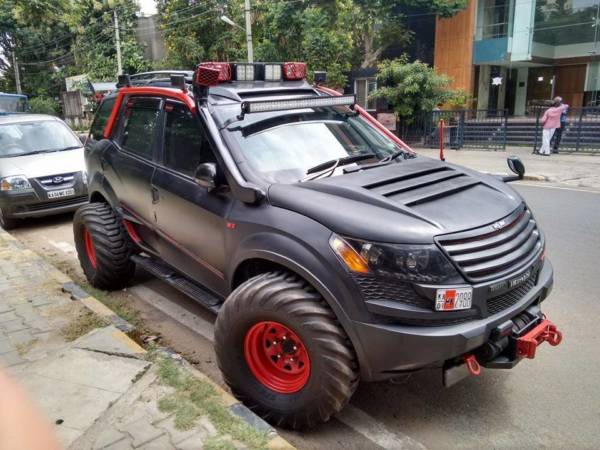 Avid readers will recall this one from our archives.  Called the Intrepid, it belongs to and is customized by Zubair Abdulla of “Hot Zone Racing Technology” in Bengaluru. Based on a Mahindra XUV500, the Intrepid rides on gigantic tires that were once destined for NASA’s Curiosity Rover Mars exploration vehicle.

The Intrepid dons a light sucking matte black paint with red highlights. Meanwhile, a bevy of lamps up front light up the darkest corners of intergalactic space. The bonnet now sports a few vents and gashes, while the glasshouse features some mysterious red tubing running over the windows. At the back, there’s a huge bolt-on jack, an extra can of fuel and a ladder to climb on to the cluttered roof. The rear bumper has DRLs stuck to it too, which is plenty odd.

The Inteprid is nuclear powered, because those tires need it. 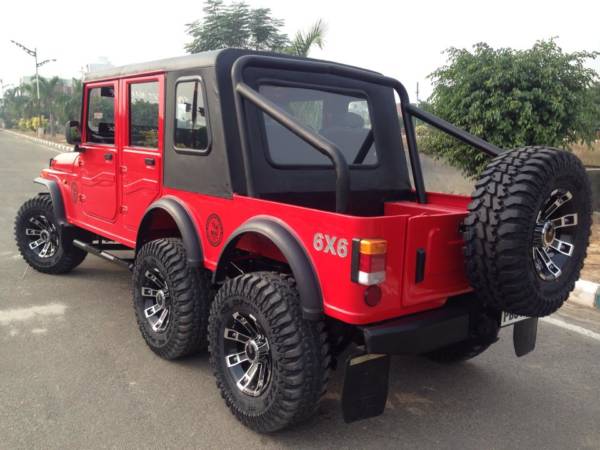 Word has it that Dan Bilzerian has one of these on order. I mean, why would he not? Just look at it! One more from our archives, the DESI 6×6 is the brainchild of Punjab based SD Offroaders Nakodar.

The bodywork is extended and now hosts one more axle, while the cabin has been neatly transformed into a crew-cab with a couple of extra doors. Up front, the bonnet width has been increased and it almost encroaches the trademark Jeep front wheel arches. The grille has also been re-done with horizontal slats, but bears an unfitting AMW logo. Then there’s also an off-road spec front bumper with integrated fog lamps, a bull bar and a couple of tow-hooks. Fitting wheels and beefy tires all around complete the package.

Inside, all the seats are Innova sourced and upholstered in red and black. Regarding the 6×6 specification, it’s unclear whether it’s a dud or a functional system.

“The Doctor…for real” can climb walls. For real.

Built by Punjab based Sarbloh Motors for a Hyderabad based doctor, this beast has mega wheel articulation, courtesy some Amada Extreme coilovers working on Dana 44 front and rear axles with differential locks. A 3,100 cc Isuzu Turbo Diesel engine accounts for some epic grunt, while the custom built roll cage and chassis is draped by a Gypsy body shell. Gearbox details are scarce, while other noticeable features include a custom fabricated exhaust system, a winch ,bar lights, and exciting green-grey livery.

Here’s a small video of it in action:

Backing up on 34″ vertical wall…

This is one radically rebuilt Scorpio, done up by one Kishan Lohiya from Hyderabad. Chopped to become a pickup truck, the mutilated Scorpio body shell was further made to accommodate monstrous 36-inch Super Swamper tyres wrapped around 16-inch wheels, courtesy some axle extension and sheet metal cutting. No lift kit was used.

The wheel arches were appropriately flared, while the front end was completely overhauled with a new design, redesigned headlamps and a set of four auxiliary lamps. Other embellishments include a WARN winch, a custom made support for the full sized spare tire and an air snorkel. 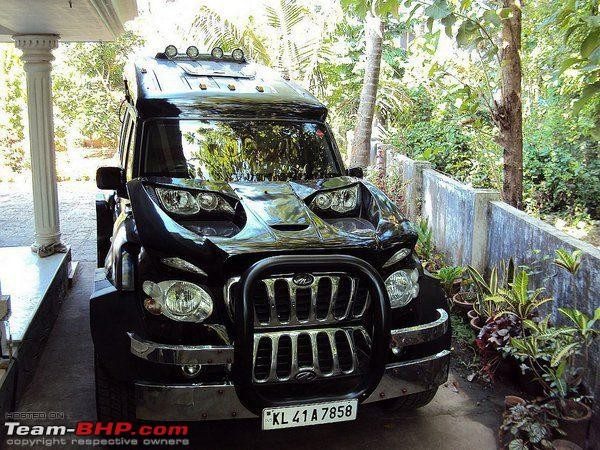 Oh my God! What do we have here? Like it or not, this mythical creature from Kerela certainly has presence! And no, that’ not a reflection of the Mahindra toothy grille – it IS another grille. As far as the eye can see, this Scorpio is bedecked with a double bonnet, and a double roof as well, apart from the aforementioned double grille. Civic headlamps carve crevices on the alternate bonnet piece, while the “other” roof is jeweled up with some extra illumination.

There appear to be bodywork extensions on the side as well, but we’ll leave it here. This thing is properly outrageous. 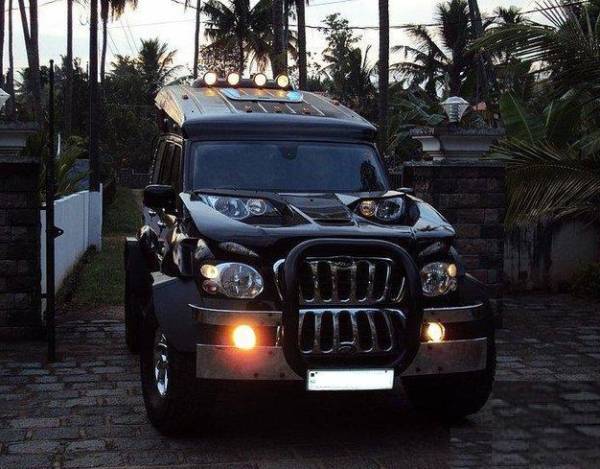