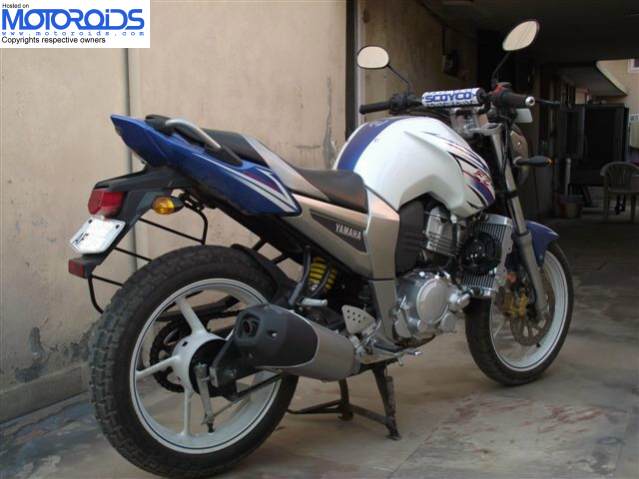 Sanjay Chadha, one of the newest Motoroids we have on our Talks section, has pulled off a jewel of a mod job. The man has converted his FZ 16 into a 250cc machine, making it as potent, if not more as a Honda CBR250R in the process.

As you would know the 250cc phenomenon is rather new to the Indian bike industry. So when Sanjay wanted to go for a 250cc machine about a year and half ago, he didn’t have any options. Not among the ones who crib, or get deterred, Sanjay decided to ‘make’ a 250 for himself. Now that’s something our domestic bikemakers have not been able to do TILL DATE after putting in decades of time, and crores of rupees into their so called R & D divisions.

Sanjay FZ 250 is powered by a 250cc, 4 valve, single cylinder, water –cooled engine. He has employed a Chinese engine into the chassis. According to the official specs, the powerplant produced peak power of 25bhp @ 8000 rpm and peak torque of 21.5Nm @ 7000 rpm. Now those figures are no less than your CBR250R. Pretty impressive for an inexpensive Chinese engine too, eh? Sanjay says he gets a fuel efficiency of around 38kmpl with the bike in the city, with the figure improving even further on the highway. The engine is mated to a six-speed transmission.

Sanjay has also done a bit of experimentation with the bike’s sprocketing. Earlier he was using a 39 tooth rear sprocket, but has now shifted to a 42 teeth unit. With the earlier sprockets, his bike did 80kmph at 4000RPM, 100kmph at 5000RPM, 120 at 6000RPM in the sixth gear. With the new sprocket these speed arrive at a slightly higher rpm.

You can read more about Sanjay’s FZ 250 in our TALKS section, where you can put your own views on the bike, and probably ask a few questions to him as well. Check out this space too for more details..