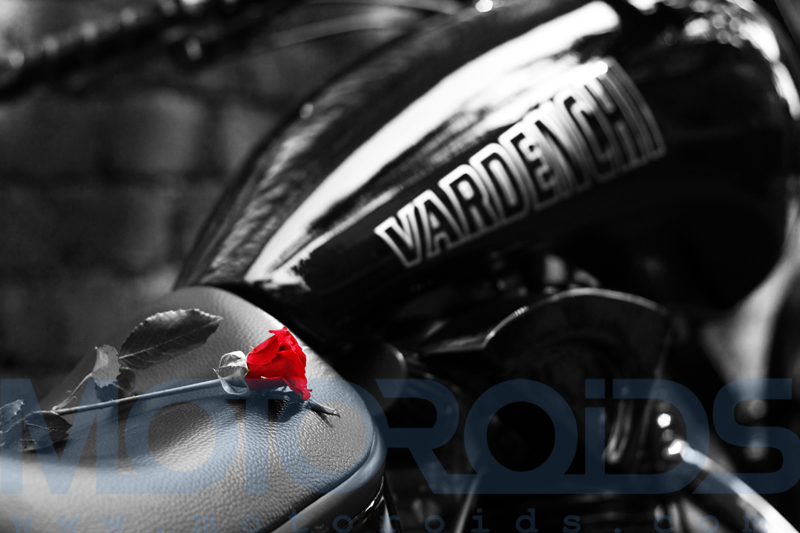 Unlike in the developed countries, for an automotive journalist in India, reviewing a custom chopper generally isn’t a very pleasant assignment. The reason being, for the majority of desi custom motorcycle builders, the idea starts with a unique paint job and ends with body parts available off the shelf at a local accessory store.In most cases, there is not much modification or engineering or customization to be written about. So, one has to rely on using flowery language, figures of speech like hyperbole, metaphor, and most importantly exaggeration to make the motorcycle in question appear worthy of reading about or spending your money on. 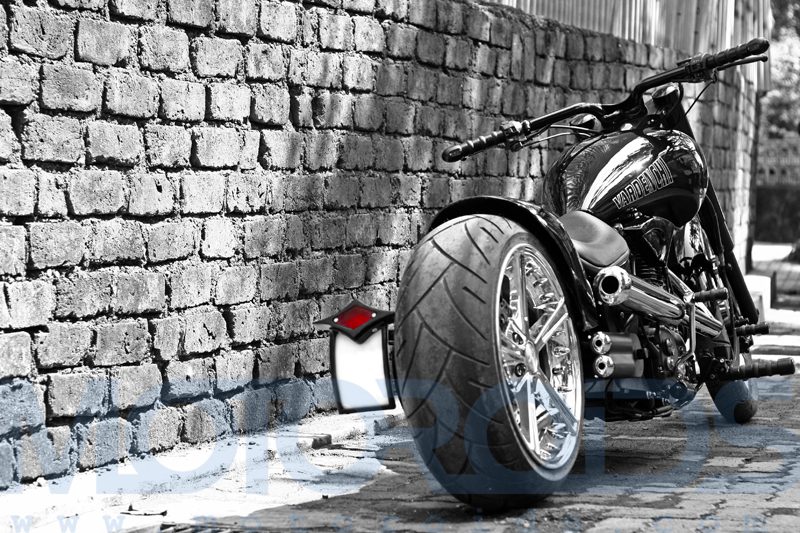 However, when the assignment involves reviewing an Akshai Varde custom creation, we have staffers fighting for the story.. A Vardenchi custom chopper is not your average motorcycle that takes twenty grand to produce and gets sold across showrooms for a 60 grand or one lakh price tag. It  is so exquisite and extravagant that even its creator can’t afford to keep one for himself!

We called up Akshai to know a few details of this chopper like color of the bike, look, etc so that the theme for the photo shoot could be planned accordingly. He revealed that the color was black and the motorcycle had a stealth look. Yawn! His description fooled us into believing that this new chopper was a carbon copy of an earlier creation.

The personality and looks of a Vardenchi chopper can make the work of any mundane lensman appear stunning and commendable. Our camera maverick wanted to be unique like always and decided on capturing this creation of Akshai on new location. We came up with the idea of taking a few pictures of the motorcycle parked in a college parking lot along with the reaction of on lookers. Upon reaching St.Andrews College in Bandra, a call was made to inform Akshai about our arrival. 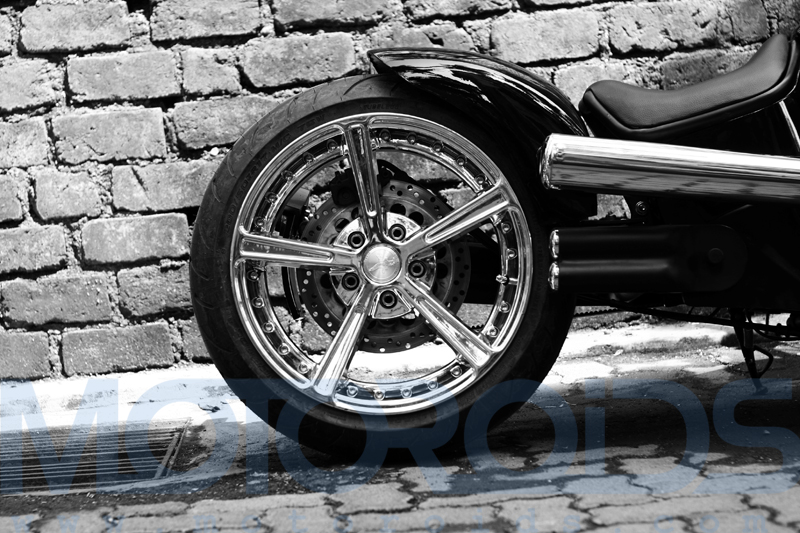 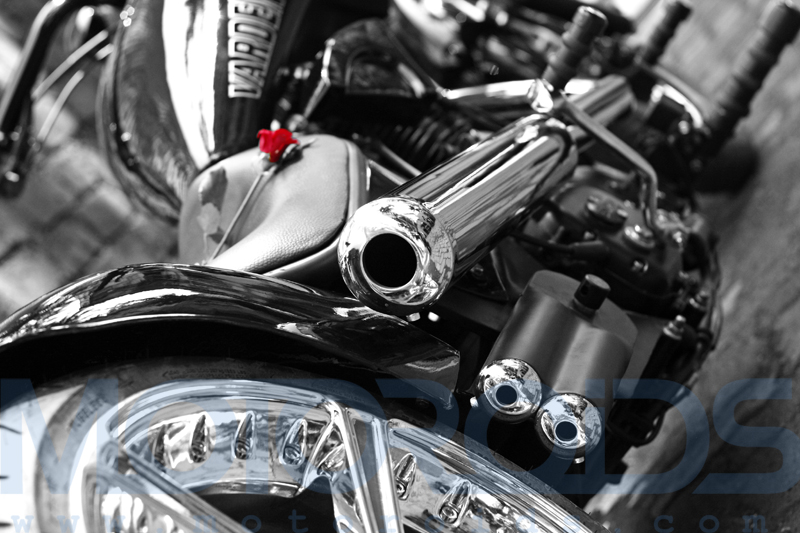 The exhaust lets out a characteristic Vardenchi chopper thump 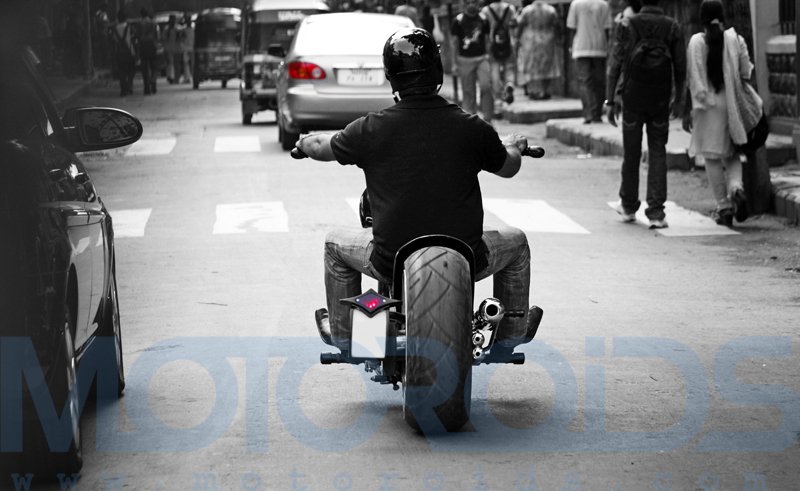 Well, that’s how wide a 200 section rear tyre looks like

We first heard the uniquely loud and characteristically thumpy exhaust note of a Vardenchi chopper before it rolled in with its creator on board. All hell broke loose immediately. Frankies dropped to the ground, sweet pretty young things were forgotten and listening to ipod’s seemed like a thing of the past, while cries of Harley Davidson started gaining prominence along with clicks from mobile phone cameras. Guys wanted to know if OCC had set up shop in Bandra while girls were merely interested in knowing the owner of the motorcycle.

The buyer of this motorcycle wanted it to be extremely low, long and devoid anything jazzy. When Akshai started working on the chopper, he wanted the final outcome to be nothing short of a phenomenon. Phew! What a rolling phenomenon it is! Christened ‘Dark Knight’ the engine and chassis of this chopper are from a Bullet Machismo 500cc which was the donor motorcycle. A typical Vardenchi trademark, the motorcycle features a belt-drive instead of the ordinary chain and sprocket setup for transferring power from the engine to the rear wheel. The belt drive system allows the incorporation of a single sided swingarm apart from reducing mechanical loss of torque.

The rear wheel comprises of  a 17 inch car alloy allowing it to be mounted on the swingarm’s hub from one side. The rear end setup also includes a Pricol disc brake system. The front wheel might look familiar to some as it has borrowed from the Pulsar 220 while the front forks belong to a stock Bullet 500. The electric starter motor and battery have been borrowed over from the donor bike. 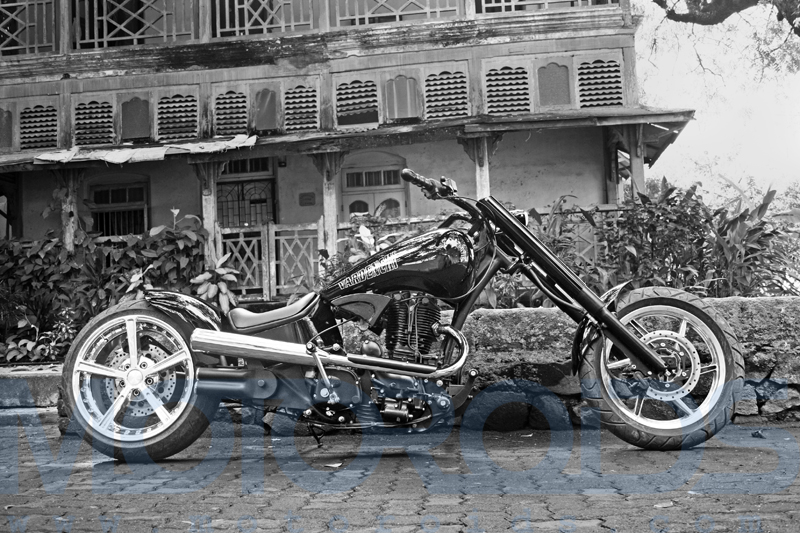 Already started imagining yourself posing with it? 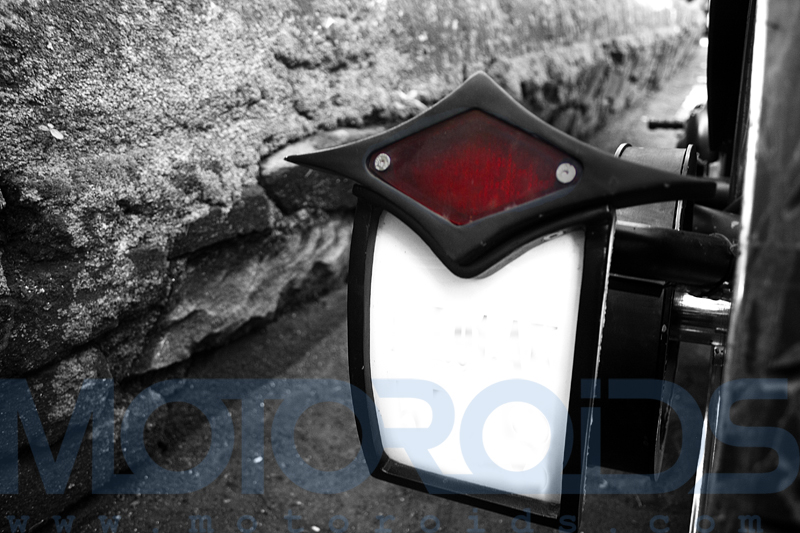 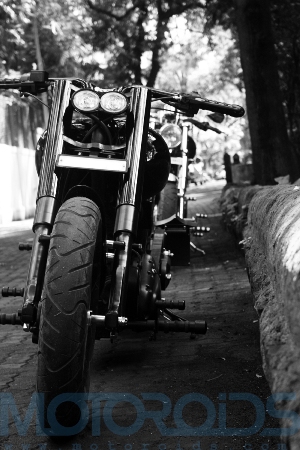 The tiny twin headlamps give the Dark Knight its characteristic face 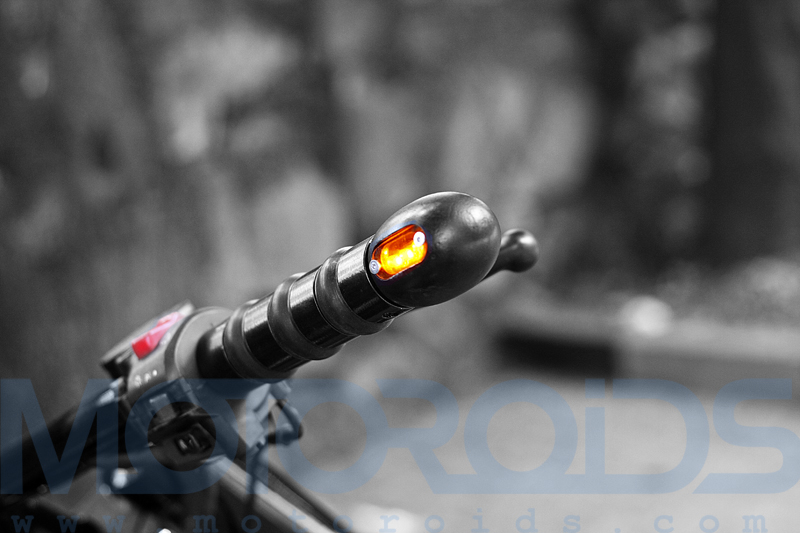 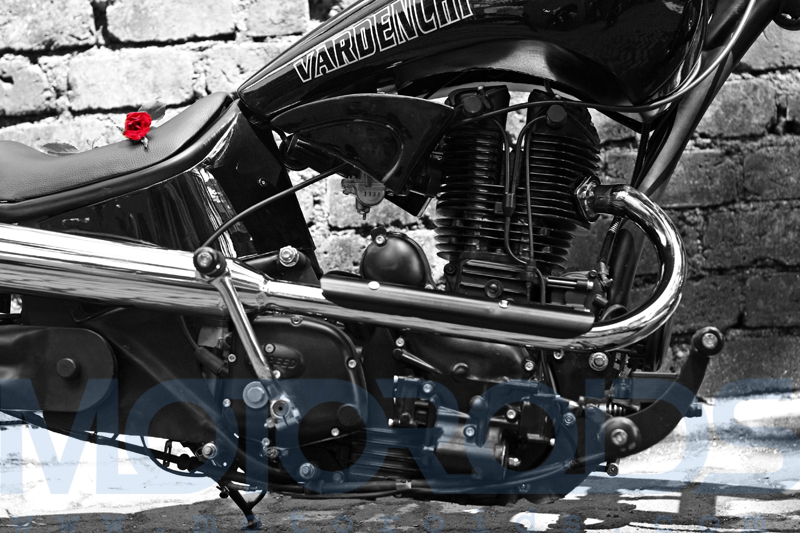 The exhaust is the only part that gets chrome, rather non-black treatment

Every Vardenchi chopper employs a novel mechanism with respect to thumping it to life. This bike comes equipped with a remote starter! Onlookers surrounding the bike were caught unawares when the chopper without any ignition key being turned by anyone. The rake angle and steering geometry have been heavily altered to lengthen the wheelbase of the motorcycle.

I have witnessed the effect that superbikes and cruisers have on the big bike starved masses of our country. But the effect that a Vardenchi chopper can produce needs to witnessed once in a lifetime. Akshay’s voice was forever etched in my mind as he replied to a businessman smitten by the bike “This is a custom chopper made in India by an Indian and is based on a Royal Enfield Bullet” 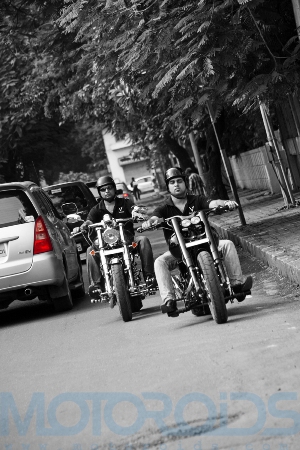 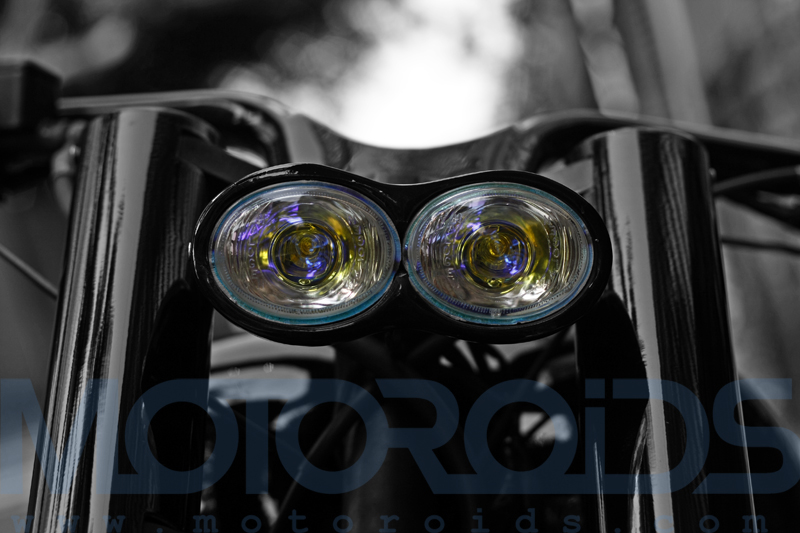 Yes, they are puny but are in sync with the overall design flow of the motorcycle 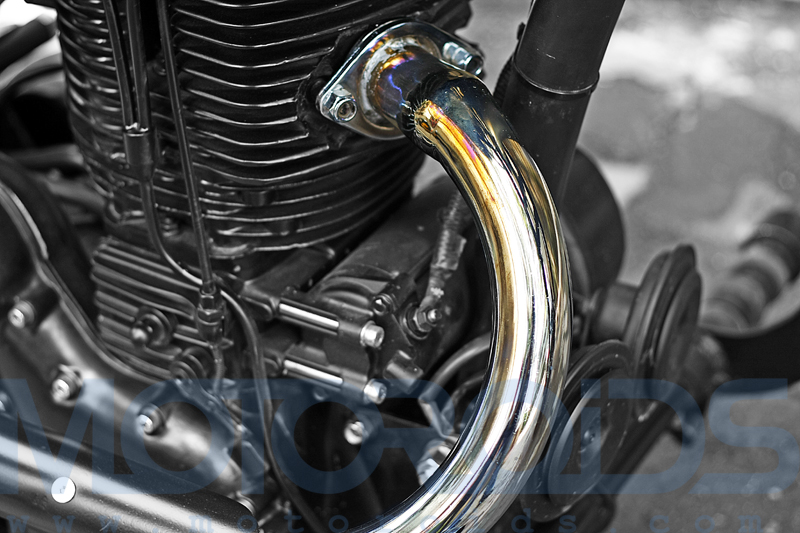 One cannot deny the fact that overall it is a very well engineered motorcycle with a unique charm and aura though one gripe exists. With a price tag of 7 lakh rupees, a Vardenchi chopper is an indulgence which not many motorcycle enthusiasts can afford. The price of this custom chopper is on the higher side considering that is powered by a Bullet engine which questions long term reliability. The price tag would be justifiable provided the motorcycle was powered by a smaller capacity V-Twin engine or it cost a few lakh rupees less.

Wherever we went on that chopper, necks dramatically rotated in the direction towards us. From the Civic driver vying for corporate success, to the gentleman in the backseat of his Merc S class, to the dude out for a morning stroll on his CBR 600RR everyone was taking envy to our presence. One could easily spot the ‘Damn, I want that bike look in their eyes.’ 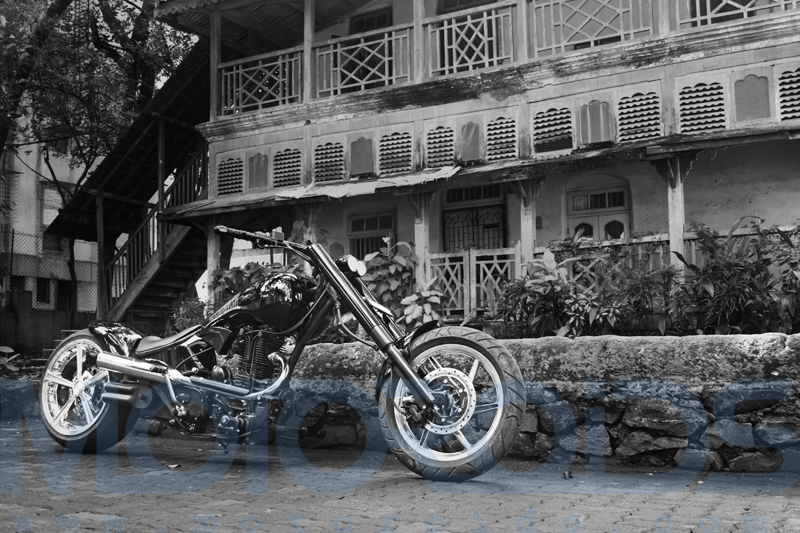 Getting awed by it is the easy part. Taking your eyes and attention away from it is difficult 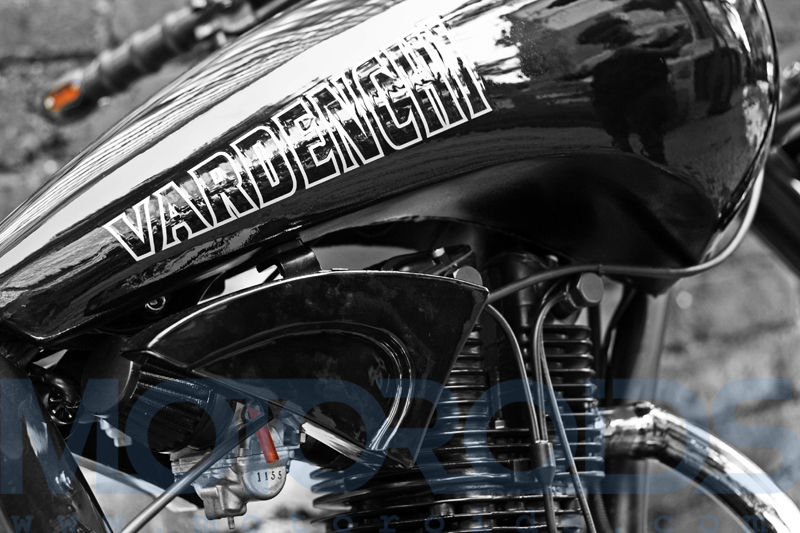 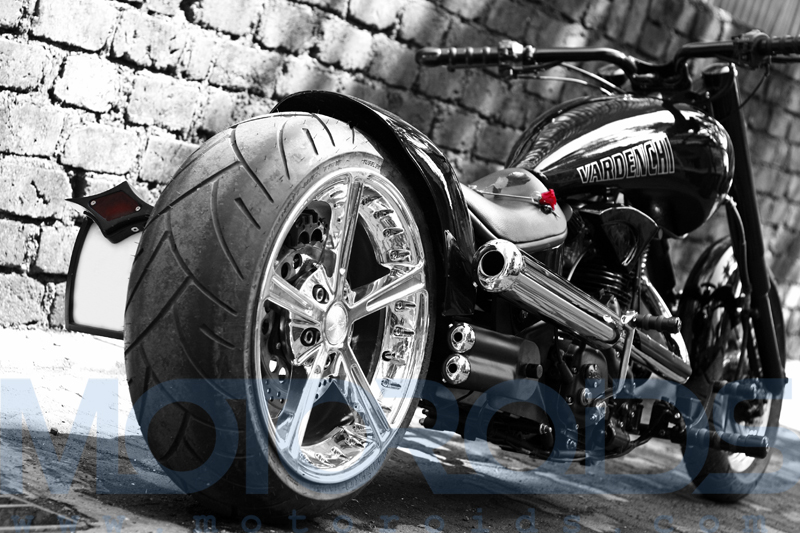 In profile and from the rear, the exhaust and the snipped swingarm look like the openings of of a deadly slug-slinger 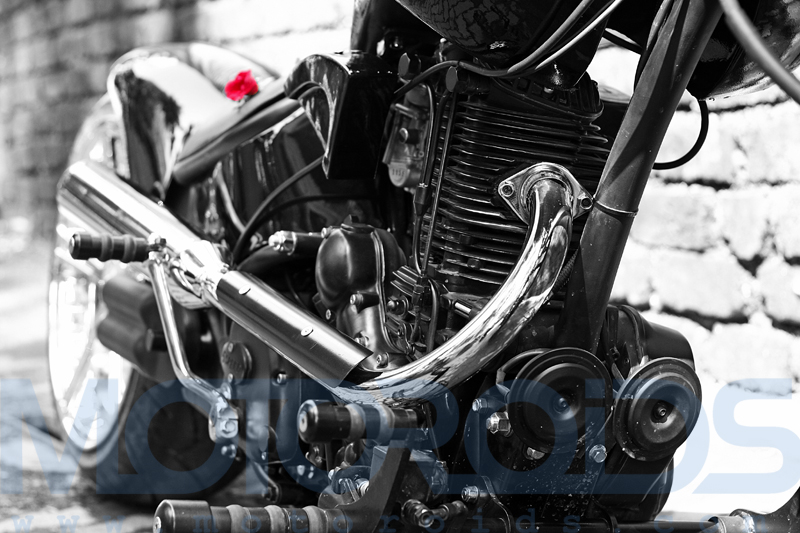 Along with a loud thumpy exhaust beat it gets two horns too! Jaywalkers will stop dead in their tracks

A custom chopper is not for those motorcyclists seeking top speed bragging rights or winning traffic light drag starts. It is for those who want ‘all eyeballs to focus on them’ irrespective of which road they ride on. If you are single, male and confident that your physical appearance won’t help you make it to the ‘world’s 50 hottest men’ list then don’t despair. We recommended you getting a Vardenchi Custom chopper. Have a look at the photographs once again. An Akshai Varde creation can even make a hairy caveman appear dateable to the ladies. 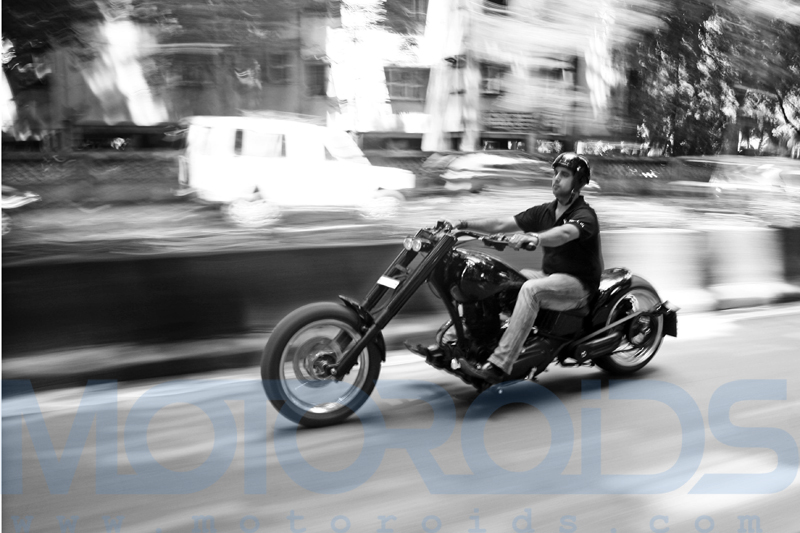 From the Civic driver vying for corporate success, to the gentleman in the backseat of his Merc S class, to the dude out for a morning stroll on his CBR 600RR, everyone was taking envy to our presence 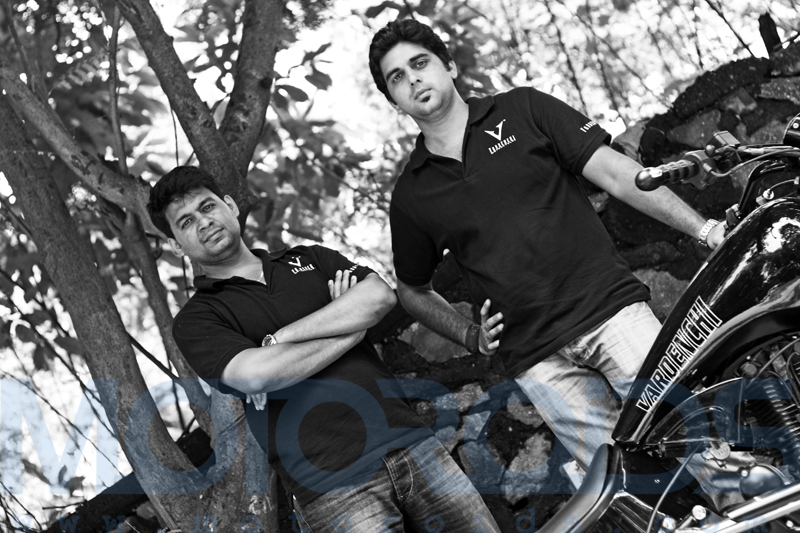