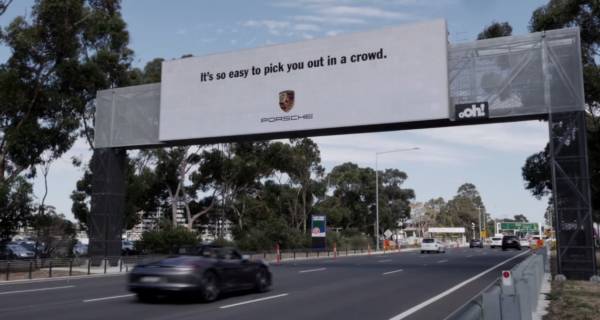 Porsche of Australia, along with Ooh! Media, a local ad agency, has devised a rather clever marketing strategy. A digital billboard, perched atop a busy road leading to the Melbourne Airport in Australia, identifies Porsches in traffic and switches to a custom-tailored message for 10 seconds which reads, “It’s easy to pick you out in a crowd.”, quelling that mid-life crisis. A camera, 320-odd yards ahead of the billboard, scans the flow of traffic, and picks out the Zuffenhausen bred beauties among the numerous other cars.

Once the Porsche has passed, the billboard reverts to its normal state, displaying normal ads. It’s an interesting bit of technological showmanship, no doubt requiring some seriously powerful software to pick out Porsche’s iconic, instantly recognizable, honed-for-decades profile among the other cars. However, it’s still not clear if the intelligent system detects the Cayennes and Macans, or even some of the older Porsches.

The billboard will only be activated for five days starting on January 10th. Watch how it works in the video below: