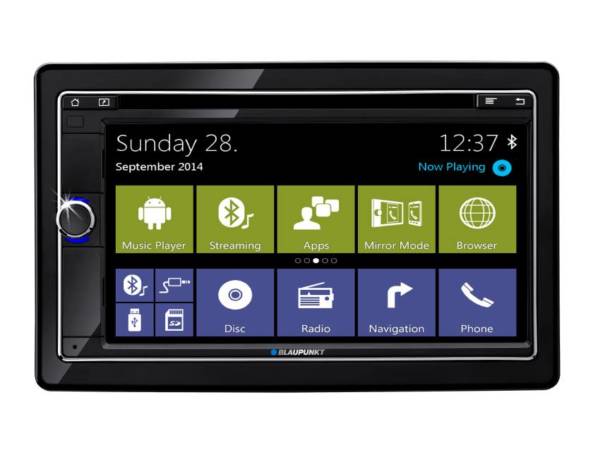 There are several companies that cater to a variety of customers, right from the most affordable music player, to the outrageously expensive systems which include big screen head units (as they are called) and a plethora of built-in settings to manage every beat and rhythm of your music. These so-called ‘aftermarket’ companies are now quite a phenomenon and release new systems every 5 hours, almost. But there are some companies, in this case a German car infotainment and sound systems manufacturer, that has come up with something that’s quite like a fresh breath of air for those on the lookout for a decent setup for their cars. 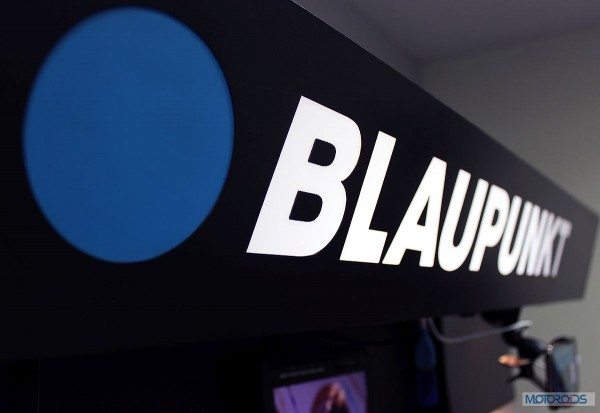 Founded in 1923, Blaupunkt has over 90 years of experience in the world of in-car entertainment and sound.

When we got an invitation from Blaupunkt India for a new product launch, we were quite confident it would certainly be something a little out of the mundane. The event was to introduce us, the journalists, to a brand-new in-car double-din multimedia and infotainment system called the Cape Town 940 with a long features list and for the first time, proper android OS integration. This got us quite excited of the possibilities of the new 940 and we scrambled ourselves to the event.

After exchanging the pleasantries we joined other journalists in a room and awaited the first part of the event, the introduction the Cape Town 940. This went on for a good 30-40 minutes and had all of us asking the Blaupunkt team a variety of questions and queries and they, very so gracefully, cleared all of our doubts. In between the introduction and the live demo phase where we got to see and hear what this is all about, we were greeted to some pizzas and piping-hot coffee. Talking of the queries, we will get to the questions we asked on this new product and the replies we got, later on in this article.

Now finally getting in to what the Cape Town 940 is all about. The 940 is an aftermarket head-unit for your car which has an actual operating system, android version 4.1.1 JellyBean in this instance and hence promises to offer up all the conveniences and features of your average android smartphone in your car. This, quite literally, is a ‘first’ on the ‘aftermarket in-car multimedia and infotainment systems’ scene. Running an OS like Android on a multimedia device opens up a lot of possibilities for the manufacturer and customer, alike. 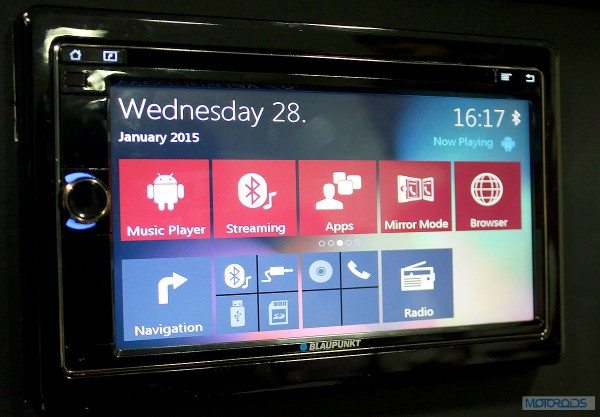 The Head-Unit (HU) has a 6.8-inch capacitive touchscreen with decent resolution and clarity.

The good bits: As you can see in the above image, the widescreen Head-Unit of the Cape Town 940 wears the familiar look and feel of android JellyBean and offers similar functionalities like a similarly equipped android phone. The display also sports a capacitive touchscreen, instead of the resistive tech offered in most of the other rivals. This means that the display was quite intuitive and smooth to operate, giving the user a more ‘premium’ feel. You basically get the feeling that you are operating a tablet and not an in-car multimedia system. This means the entire setup is quite user-friendly in its operation and that follows through and through. The dual-core cortex 9 chipset ticking under the 940 is clocked at 1GHz has a 1GB RAM to give it company through all the processing that the user is going to put it through. We experienced no lag or stutter whilst using this HU and the screen was really responsive to the touch. 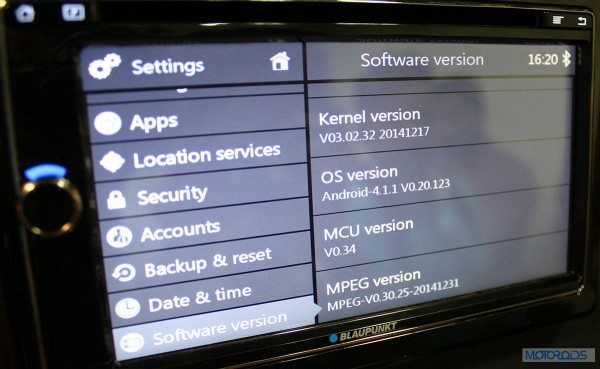 The main aim behind the Cape Town 940 is to help the customer pair up their android device with the 940 and then on, do whatever he/she wants to through this big-ish head-unit. We tried using the 940’s features which includes the Bluetooth streaming feature which can stream music and videos through the user’s phone. Blaupunkt India had already setup a phone rigged to the head-unit and showed us how the unique ‘Mirror mode’ works. This mode doesn’t make the Cape Town 940 an expensive mirror, but the head-unit duplicates whatever is on the display of your phone. But, for this to work, you will need to buy an HDMI/HML cable. The 940’s big display can be used to change your music or browse your phonebook’s contacts list or whatever it is that you want to do. It all seemed quite seamless and fluid to us and nothing seemed to catch the 940 by surprise as it glided through the menu and settings pages. We are also quite impressed with the design of this head-unit, that said it’s not exactly a beauty pageant winner. The 6.8-inch display is bright, but we can’t comment on its sunlight legibility because we haven’t had a chance to witness its performance under direct sunlight. 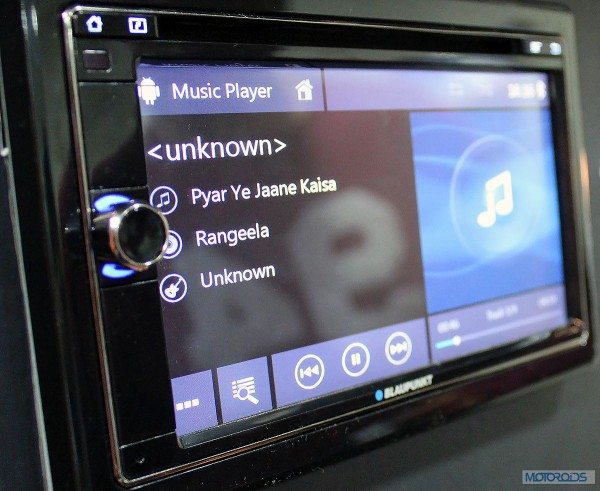 Of course it plays music. And yes, it can play better songs than this.

Obviously, being an in-car multimedia system means that the Cape Town 940 plays your favourite tracks, too. The certified maximum output for this head-unit is 420-watts. You can take this further by complimenting the system with some amplifiers, of course. The demo did give us a glimpse into the clarity of the Cape Town 940 and we must say, it sounds awesome! We all have heard of the phrase, ‘Efficient Germans’; well guess what, it certainly applies here. From the fit and finish of the head-unit, to the crispness of the sound that it delivers and the flexibility of having the OS run on android, this Blaupunkt is truly well-rounded. 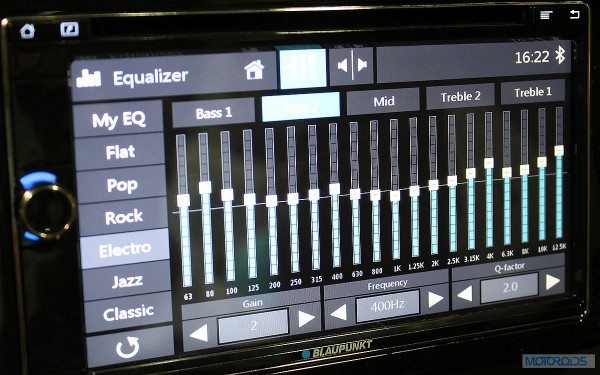 The Cape Town 940 comes with a 5-Band equaliser to cater to your taste.

The demo also helped us gauge the accuracy and usefulness of the built-in equaliser to a good extent. The difference in each is noticeable and it also enables the user to custom tweak the sound signature according to their unique taste. Blaupunkt calls this, a Parametric equaliser. Now, we don’t actually know what that means, but suffice to say that it works and works well. 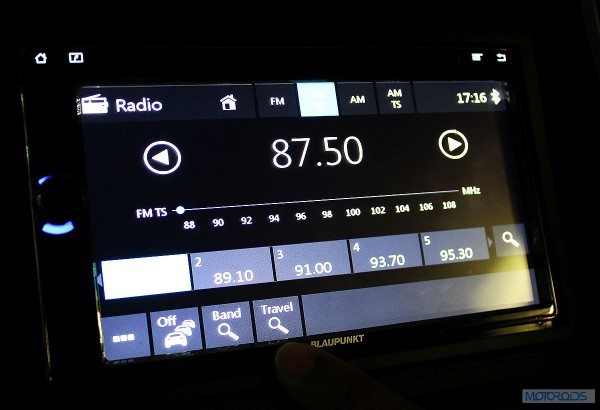 It’s a breeze going through radio stations, thanks to the large and smooth display.

The ‘radio’ part of this multimedia unit works just fine. The display of icons are legible and their size makes it easy to switch between channels, no problem. Of course, we and Blaupunkt don’t recommend you fiddling with the screen while you are behind the wheel. Talking of which, if your car comes with steering-mounted audio controls, this head-unit can be configured to work on those inputs, as well. It is quite a flexible unit in that aspect. 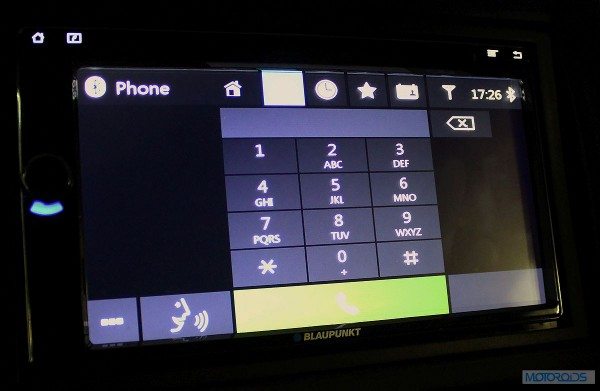 The phone dialer displays your call log and can store up to a 1000 phonebook entries.

The Cape Town 940 can be bought with an external microphone, though at an additional cost and this enables clearer conversations between you and the person on the other end of the call. And talking of the 1000 phonebook entries, this Bluetooth enabled device lets up to 2 phones to be connected with it at the same time. But only one phonebook can be paired with it and that means that if the other person in the car wants to use his/her phone to make call through the 940, the first person will have to de-couple their phone’s phonebook. Blaupunkt calls the primary user of this system as ‘Master user’ and that means if the secondary user wants to access their phonebook through the head-unit, they will have to replace the first user and then become the primary user. We know all this sounds a bit complicated, but in short, only one Bluetooth paired phone can use the dialer at any given time. 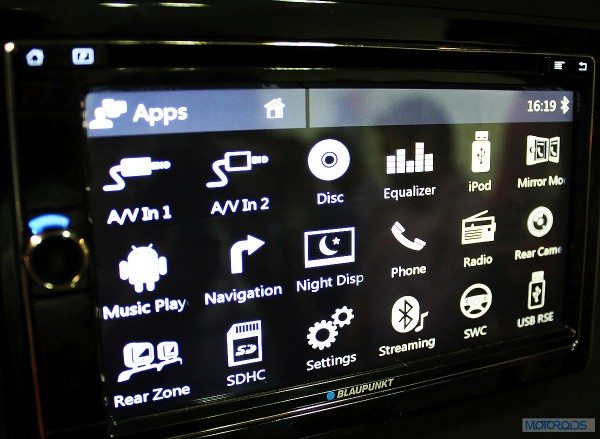 The application drawer shows all the built-in apps.

Being an android run device, we got a chance to browse through the built-in apps that this device comes pre-loaded with. And these include Facebook and Twitter, along with Accuweather, TuneIn radio etc. This means you can use the WiFi feature of the 940 to connect to your favourite social networking platforms and also get weather updates. There’s also YouTube if you fancy watching some videos if you get bored in a mile long traffic jam. One of our most favourite features is something that most consumers would’t actually notice right away, that is the ‘Parking’ mode of the 940. When enabled, this mode will make sure that the driver cannot watch any videos or images or anything that is unnecessary during the driving phase, unless the car is stationary with its parking brake engaged. As good as this safety feature is, there is one downside to it as we saw. The customer should opt for the feature by having a physical linkage between the head-unit and the parking brake. Obviously, the head-unit cannot sense if the brake is engaged or not, otherwise.

Blaupunkt has equipped the Cape Town 940 with the following; Optional paid (one-time charge) navigation feature through a micro SD card with MapmyIndia providing the requisite data (available for 5 major cities, as of now), iPod / iPhone compatibility, support for USB mobile HDD supporting up to 40,000 files, 4 USB ports (one at the front and 3 at the rear), a microSD slot for audio, video and pictures, 5- Band parametric equaliser, rear seat entertainment via USB, DVD or A/V, input for the rear camera (if your car has one), Bluetooth Twin Connect, which allows 2 phones to connect to the 940 at the same time and a WiFi USB-Dongle (one of the 4 USB ports) which comes with the head-unit. Basically, you get a lot of features for your money. And that money is Rs. 54,990, which is not cheap, but then again, this is quite a ‘value-for-money’ product even considering the steep asking price. And Blaupunkt made it clear from the start that the customer will have to cough up extra money to take advantage of the navigation system (MapmyIndia). 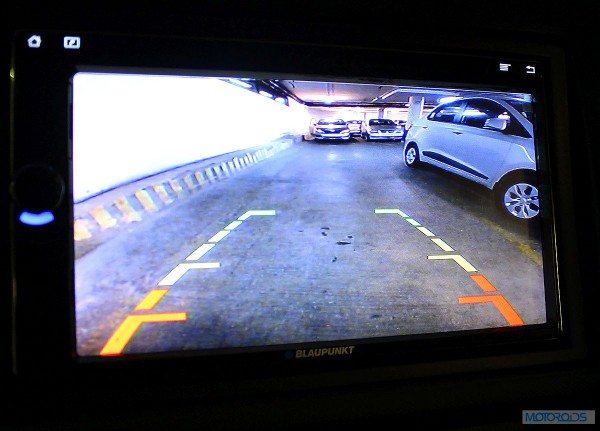 The rear-camera can be displayed on the screen if your car comes with one.

The not so good: There are very few things, if any, that we don’t like much about this product. Rather, that we don’t much like. Price, of course, in one. Also, as mentioned earlier, the system cannot detect if the handbrake of the car is engaged or not if the physical connection has not been made with the head-unit. And this connection requires the customer to pitch in more money to have it work in their car. This means that the driver could, in theory be watching a movie or browsing his/her Facebook whilst behind the wheel. That, we think, isn’t a very safe thing to do. Apart from that, there isn’t much to not like about the Cape Town 940.

Verdict: During our short stint with the Cape Town 940, we experienced what is quite literally a well-rounded package that is feature-packed and delivers on excellent sound quality (if the customer opts for equally good speakers). Some might see the Rs. 54,990 as being quite steep, but then again, high-end equipment, especially German, are never cheap. So if you desire having an all-round android experience in your car, this will be your only choice for the moment. And with the amount of features that it offers, you will be figuring out new things that it can for quite a while post your hefty purchase.