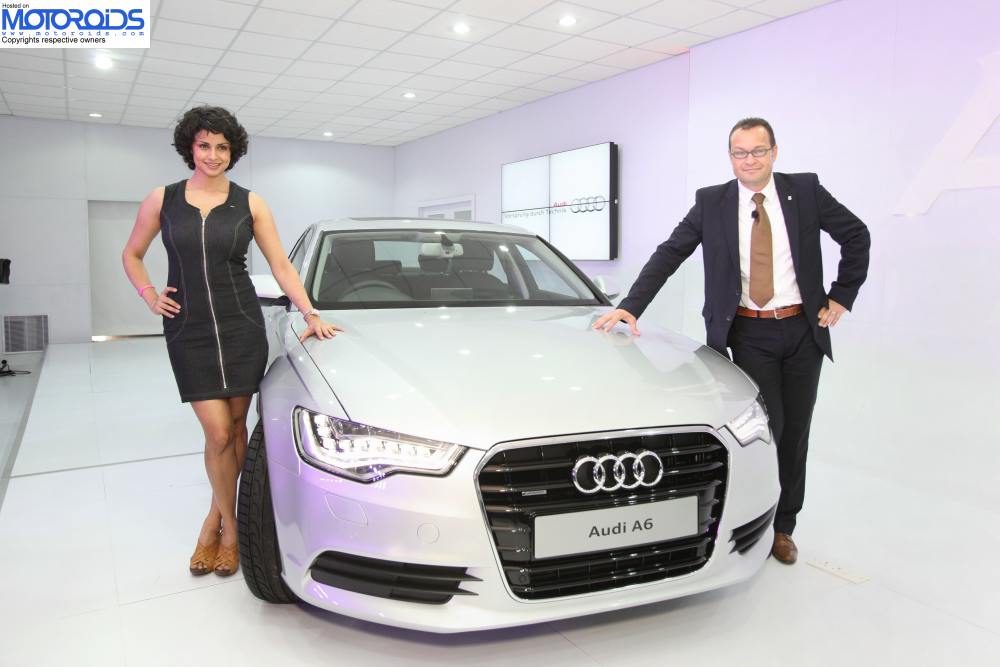 The Seventh generation A6 in India

Successor to one of the world’s most successful executive sedans, the new Audi A6 features groundbreaking solutions in every area of technology. The body is intelligently built light, owing to a significant proportion of aluminum components. The range of assistance and multimedia systems is extensive, and operation is intuitive and user friendly.

Way back in 2006, Audi redesigned the rules of motorsport and became the world’s first automobile manufacturer to compete with a diesel engine thus writing an important chapter in the history of motor racing with a momentous triumph in the 24 Hours of Le Mans, the world’s toughest endurance race. The new Audi A6 embodies lightweight through its hybrid aluminum body and efficiency through its best in class consumption. The Audi A6 2.0 TDI, for example, tips the scales at a mere 1,575 kilograms and consumes 4.9 liters/100 km* (as per EU cycle). With these features in common with the Audi R18 TDI – winner of the 24 Hours of Le Mans Race 2011 – the new Audi A6 offers today’s successful business leader, a powerful, yet sporty and luxurious business limousine.

The ‘CEO corner office’ on the move

Embodying ‘business luxury’ in its true sense, the new Audi A6 is a perfect combination of comfort, sophistication and progressive technology, appealing to the evolved needs of the C-suite Indian executive.  The A6 customer does not aspire for just success but is in constant pursuit of excellence. The new Audi A6 has been conceived in-sync with his aspiration for excellence and recreates a level of business luxury that resonates with the finesse that he seeks.

Elegant and timeless, the styling of its predecessor is carried over and further enhanced in the new Audi A6. With its many technical innovations and its lightweight aluminum construction, the design embodies athleticism and elegance. Measuring 4.92 meters in length, with a 2.91-meter wheelbase, the new Audi A6 is 1.87 meters wide and 1.46 meters high – the sportiest proportions in the executive class.

The roomy interior of the new Audi A6 echoes the sinewy look of the exterior design. The salient element is the “wrap-around” – an inlay encircling the driver and the front-seat passenger. The elegant face of the instrument panel underscores the sleek quality of the cockpit area. Every detail of the interior is a testament to the care that Audi invests in

car making. The spacious interior with its rich selection of equipment such as MMI touch, Bluetooth interface, Bose surround sound, comfort key, combined with an elegant exterior makes the new Audi A6 the perfect luxury sedan for the C-suite executive of India.

Audi is launching the new A6 with a choice of four powerful, highly efficient four and six-cylinder power plants. The two Petrol engines and two TDI units produce outputs between 130 kW (177 hp) to 220 kW (300 hp). All of these engines make use of technologies from the brand’s modular efficiency platform – the innovative thermal management concept, the start-stop system (petrol), and the energy recovery system.

The MMI terminal is a clearly organized touch & feel landscape whose design presents a new evolutionary development. The large onboard monitor for the MMI system, which was first introduced in the Audi A8 L in India early this year, comes with a standard 6.5 inch screen and optional 8-inch screen with the revolutionary MMI touch pad. In MMI plus, hard keys take the user to the main zones: Telephone, Radio, Media and Vehicle. Two additional hard keys: the menu overview and back button complete the system.

High-tech from Audi: the LED headlights

Optional LED headlights, a distinguishing feature of the Audi family, emphasize the striking expression at the front of the new Audi A6. With a color temperature of 5,500 Kelvin, their white light resembles daylight, which is easier on the eyes at night. The visually striking LED headlights are maintenance-free and extremely efficient. The low beams consume just 40 watts per unit, which is even less than with the xenon plus technology.

A standard feature for the new Audi A6 is the air suspension with electronically controlled damping. With it, the sedan remains smooth and composed over all types of irregular surfaces. The latest generation of the system is used in the Audi A6. The air suspension sets the ride height of the body to various levels as a function of driving speed and the wishes of the driver. In auto mode, the body is lowered by 20 millimeters once the A6 has driven for at least 30 seconds at a speed greater than 120 km/h.

The Audi drive select dynamic handling system which is a standard feature, modifies the accelerator characteristic, the shift points of the automatic transmission, and the power steering boost. The driver can vary the function of these components between three predefined modes “comfort,” “auto” and “dynamic.” An additional mode, “individual,” allows the driver to create a preferred profile within certain limits. The TFSI models feature the “efficiency” mode, which allows an even more fuel-efficient driving style.

“The Audi A6 has played a significant role in Audi’s exceptional performance globally, and I am confident that the seventh generation Audi A6 with its distinctive appearance, dynamic performance and progressive technology will further strengthen our position in the Indian market. The new Audi A6 will help us establish a leadership position in the limousine segment, just like we enjoy in the luxury SUV segment,” added Michael Perschke.

Audi delivered more than 652,950 cars to customers worldwide, an increase of 17.7 percent over the same period in 2010. Audi is the No.1 premium car brand in Europe and China and is currently the fastest growing luxury car brand in USA and India.