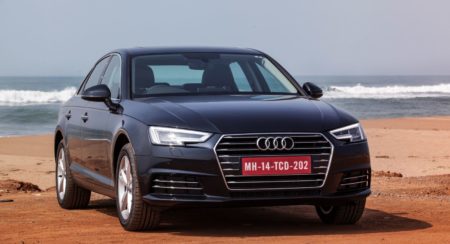 The Audi A4 is the German car makers top-selling sedan in India. The car looks are very understated and minimalistic when compared to its peers but The interior quality and cabin comfort is where the A4 blows its rivals out of the water.

Audi A4 Exterior Design and Features

In the present avatar, the Audi A4 hasn't changed much in terms of looks and maintains the same design language as the previous generation with sharp and clear body lines and a boxy design giving the car a very powerful yet elegant look. Subtle changes have been made to styling which gives the car a fresh look. The car gets standard Xenon plus headlights in a new design with a very beautiful LED DRL strip running in the same housing.

Audi A4 Interior and Cabin Features

It is the interior and cabin where the Audi stands out compared to the competition. The A4 gets a very well put together cabin which just drips class. The wood inlays and the haptic buttons on the dashboard make the car feel very premium. The A4 gets Audi's virtual cockpit display and proprietary infotainment system which needless to say are the best in class.

Although there are better cars in terms of rear-seat comfort the A4's cabin is comfortable for 4 average-sized adults and it gets large 490-litre boot which is more than adequate for a weekend getaway. Other noteworthy features include 3 zone climate control, rear AC vents, Audi voice dialogue system and a wireless charging pad for qi enabled phones to complete the package

The A4 gets all the safety features one would expect from a car of this segment. The vehicle gets 6 airbags, ABS, Anti-Slip Regulation (ASR) for improved traction, Electronic Differential Lock (EDL) on surfaces with varying levels of grip, this start-off assistant automatically brakes the drive wheels on any surface that is too slippery, Electronic Stabilisation Control (ESC) networks the ABS, EBD, ASR and EDL with its own sensors and compares the driving data with reference data; providing better stability at all speeds by targeted braking of individual wheels.

Audi A4 Quick Lift Launched; Prices Start From INR 41.49 Lakh
Audi A4 Gets A Facelift With New Design And Hybrid Tech
Audi A4 Celebrates Its 25th Birthday Today
Lifestyle Edition Of The Audi Q7 SUV and A4 Sedan Launched
MY2019 Audi A4 Gets Comprehensive Package Of Styling Updates
New Audi A4 35TDI With 190HP Diesel Engine Launched At INR 40,20,000
2017 Audi A4 Diesel Coming To India in February With 190 HP
SPIED: 2016 Audi A4 diesel spotted during a public road test
New Audi A4 launched in India, priced at INR 38,10,000
Next Page »