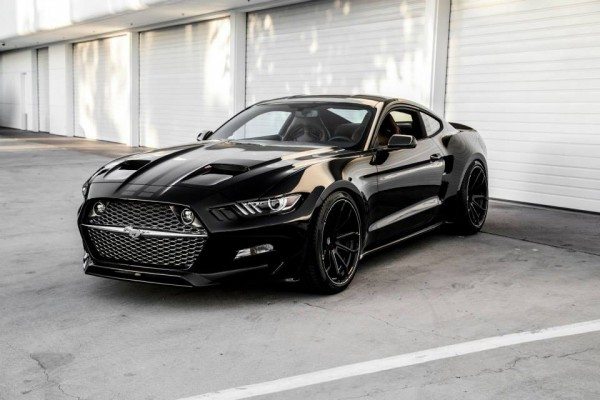 The first production Galpin-Fisker Rocket is ready, after it debuted at last year’s LA Auto Show in November.  And its looks rather sinister, with its gloss black paint-job, subtle racing stripes and blacked out 21″ 10 spoke ADV.1 wheels. Built in association with Galpin Auto Sport, and designed by Henrik Fisker, the Rocket is based on a 2015 Ford Mustang, but the entire exterior design has been substantially reworked by Fisker. Inspiration came from American muscle cars from the 60s, specifically the 1968 Shelby GT500, with its long hood and huge air intakes. 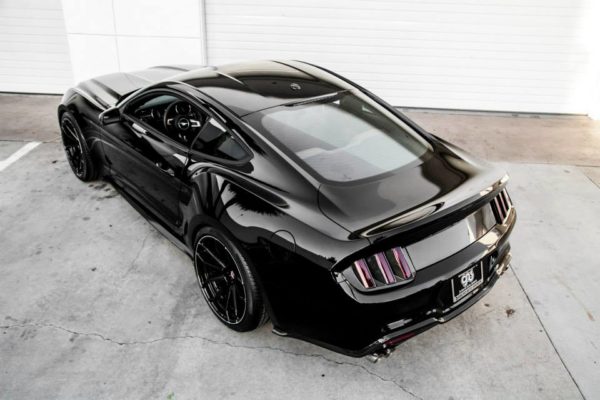 As an adaptation of the 2015 Mustang’s style, the biggest visual romp comes from the slightly elongated nose, which now hosts a gaping hexagonal grille with a polished bar running and two nearly hidden driving lights at the top corners. The sides are more bulbous now, thanks to the flared arches, while twin vents in front of the rear wheel arch cool the massive Brembo Grand Turismo brakes. At the rear, there are wider fenders that are beautifully blended into the integrated spoiler. The interior has been left mostly apart from some red leather and carbon-fiber trim. 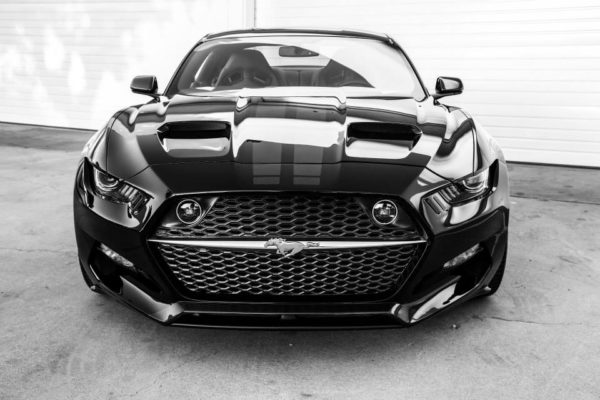 The body is constructed entirely of carbon fiber body, and was crafted by GFMI Metalcrafters, while its Cat-Black exhaust system with quad tips comes from Bassani Xhaust. Colors available for the “ultimate American Muscle Car” are Black (like this particular example), Ingot Silver, Magnetic, Oxford White, Race Red, Deep Impact Blue or Competition Orange – or basically 7 of the 10 available factory Mustang colors. 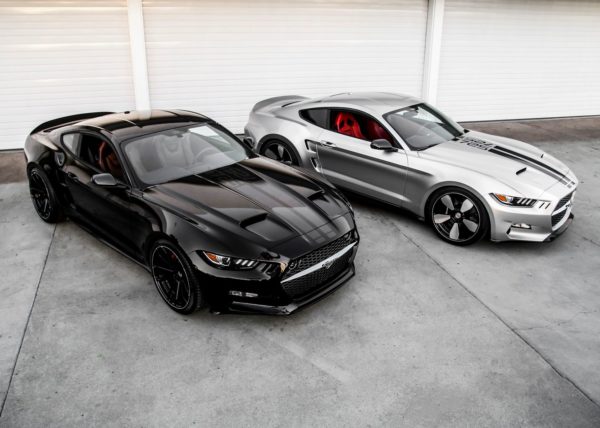 Under the hood, the Rocket employs a massaged 5.0-liter, 725 HP, Coyote V8 with a Whipple supercharger displacing 2.9 liters; all of which will be paired to a six-speed manual gearbox. The Rocket also features a custom suspension setup. As for straight line performance, no official numbers are in yet, but 60 mph (96km/h) is expected to be dispatched in 3.5 seconds, followed by a top speed of over 300 km/h. The Rocket commands a price tag of over $100,000.