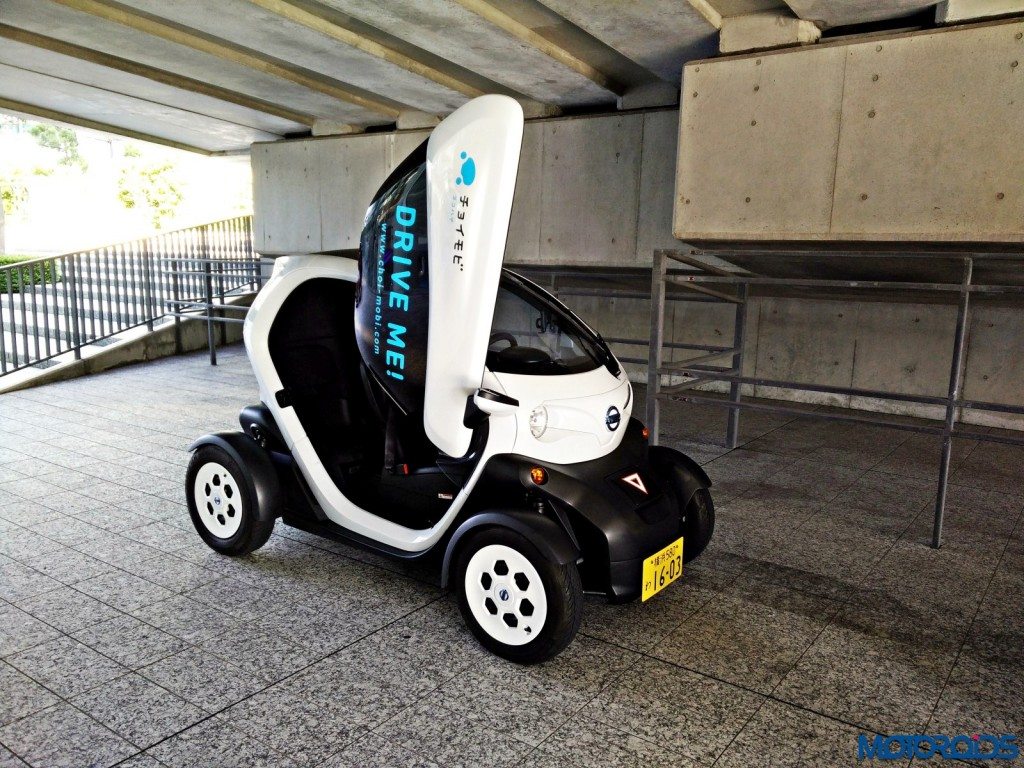 Commuting, for most is more of a chore than an enjoyable activity. Using a full sized, four wheeled car, which can actually be used to transport up to five people, for one person has often been pointed at as excess by environmentalists and traffic management authorities. Apart from burning excess fuel and occupying about 3 times the space ideally required on the road, single individuals travelling in a car also spend much more money than they need to on transportation. It’s not, however, right to blame the users, though, as there hardly are any real solutions to the problem barring public transport – which in some cases, is either not sufficient, or doesn’t provide a point to point transit.

The idea of replacing four wheels with two has also been long debated, though it’s not entirely implementable due to a variety of reasons. First, not all people are comfortable with the relative instability and hazard a two wheeler offers as compared to a four wheeler. Secondly, two wheelers fail to offer protection against the elements such as wind, dust and rain. Finally, a two wheeler cannot match the climate control and other amenities a four wheeler driver enjoys. 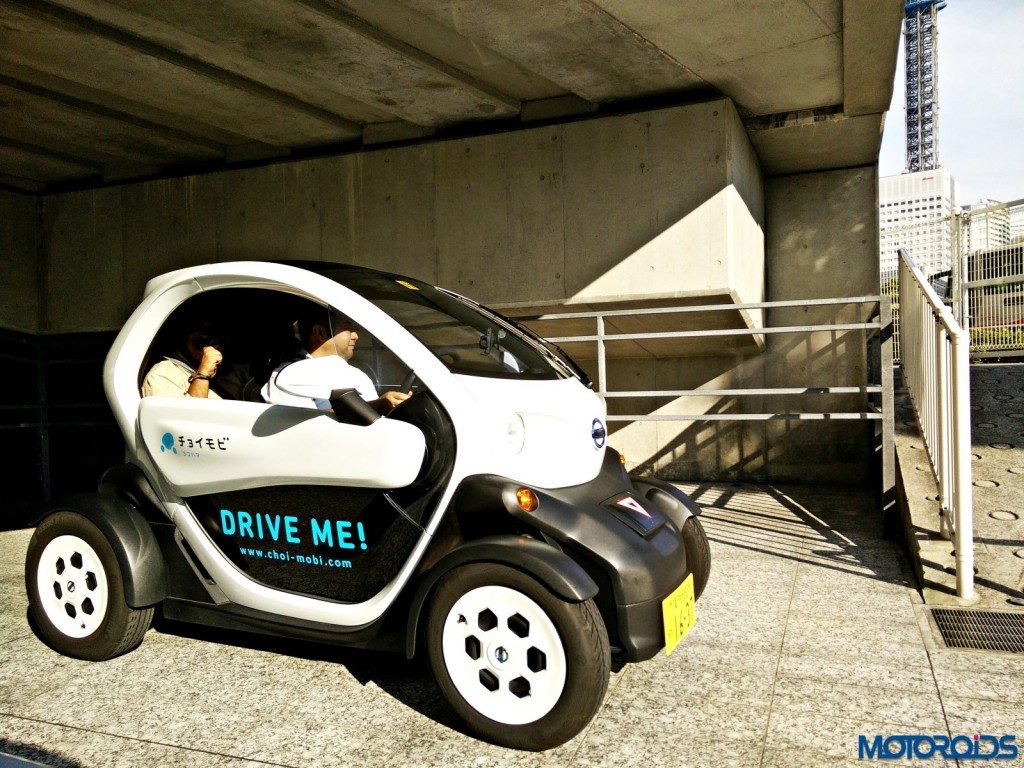 This problem is the very basis behind the conceptualisation of a compact, safe and environmentally friendly personal transport machine, which offers a suitable personal transport solution, minus the excess. The Nissan New Mobility concept, shown here in these images is a concept which tries to address the problem in a unique way. The vehicle, isn’t a complete solution to the challenges highlighted above, though it is does manage to form an early stage template  of what a personal mobility machine in the metros may look like in the future. Let’s have a closer look. 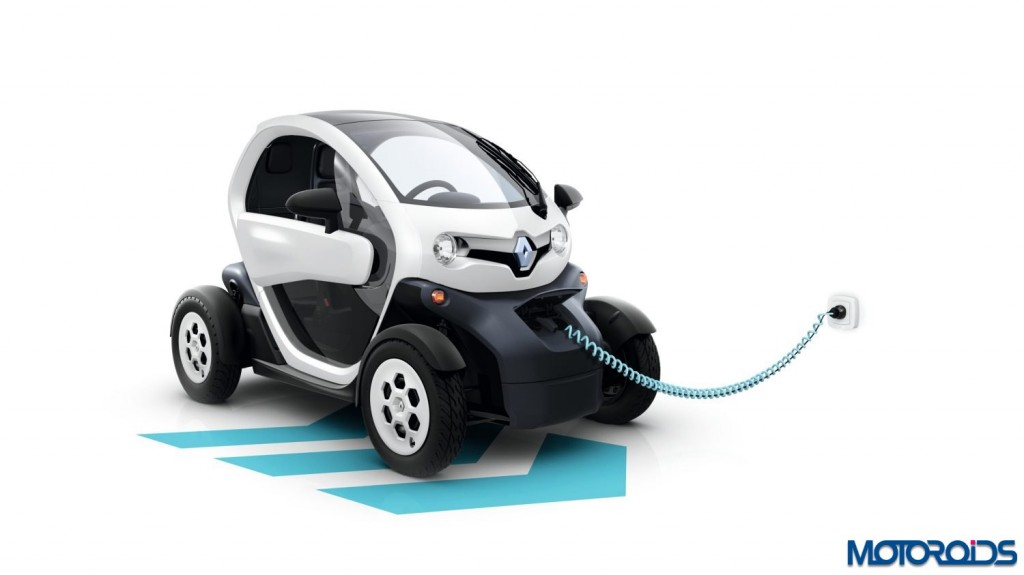 The Nissan New Mobility Concept is essentially the Renault Twizy with some changes, and Nissan branding.  It’s an ultra compact, 2-seater electric vehicle for short distance every day, urban driving. It offers the stability of a four wheeler, while taking about a half of a regular car’s space. It’s silent, and doesn’t pollute the environment too, as it runs 100% on electric power. The compact dimensions offer easy manoeuvrability, while the four wheels and a covered shell offer superior protection as compared to a two wheeler.

Tell me more about the specs 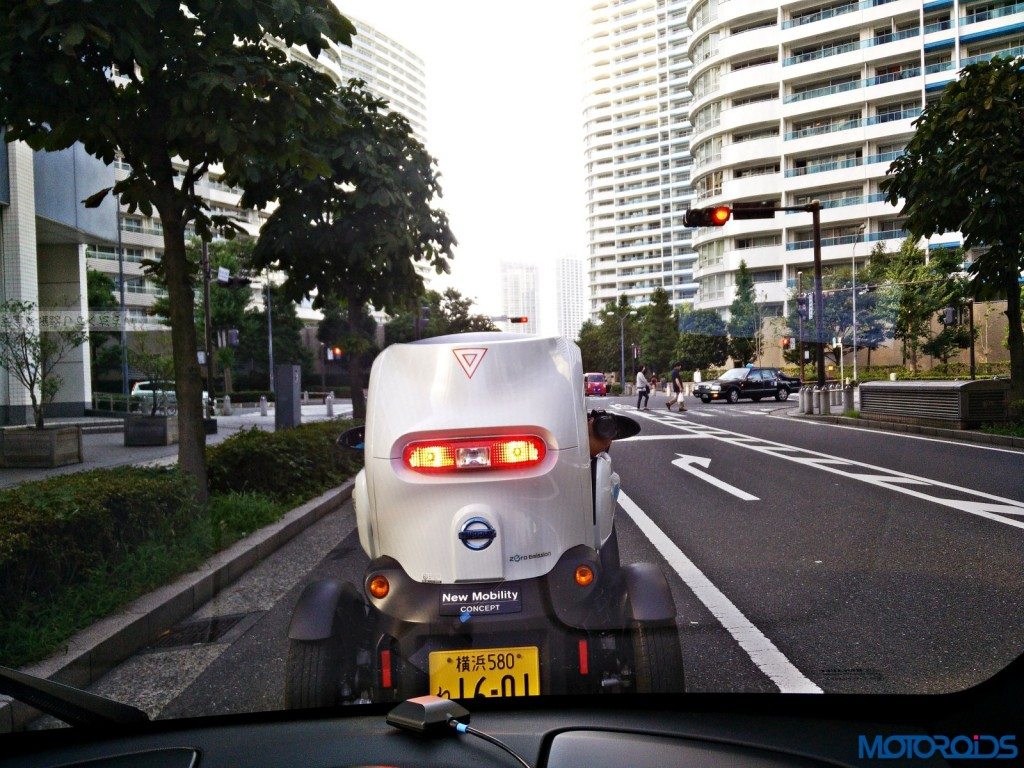 The New Mobility concept’s dimensions measure at 2340 x 1230 x 1450 – that’s about half the size of the sub-4 meter cars that are all the rage in India today. It has a front-back two seater layout with scissor doors. Lightweight construction means that the concept weighs just 500 kg. The rated output of the motor on the vehicle is 8Kw (10.9 PS) with maximum output of 15 Kw (20.4 PS)

The compact personal mobility vehicle is capable of attaining a top speed of about 80km/h with an approximate cruising range of about 100km.

Unfortunately, the Nissan New Mobility Concept is still not in production. The current Road Trucking Vehicle Law in Japan bans it from running on public roads, and the driver of the vehicle requires a special license to operate it. Obviously, with those kinds of restrictions, we couldn’t have driven it. However, we were offered a chance to hitch a ride on the machine on the streets of Yokohama as co-passengers, and we can share with you a thing or two about what it felt like. 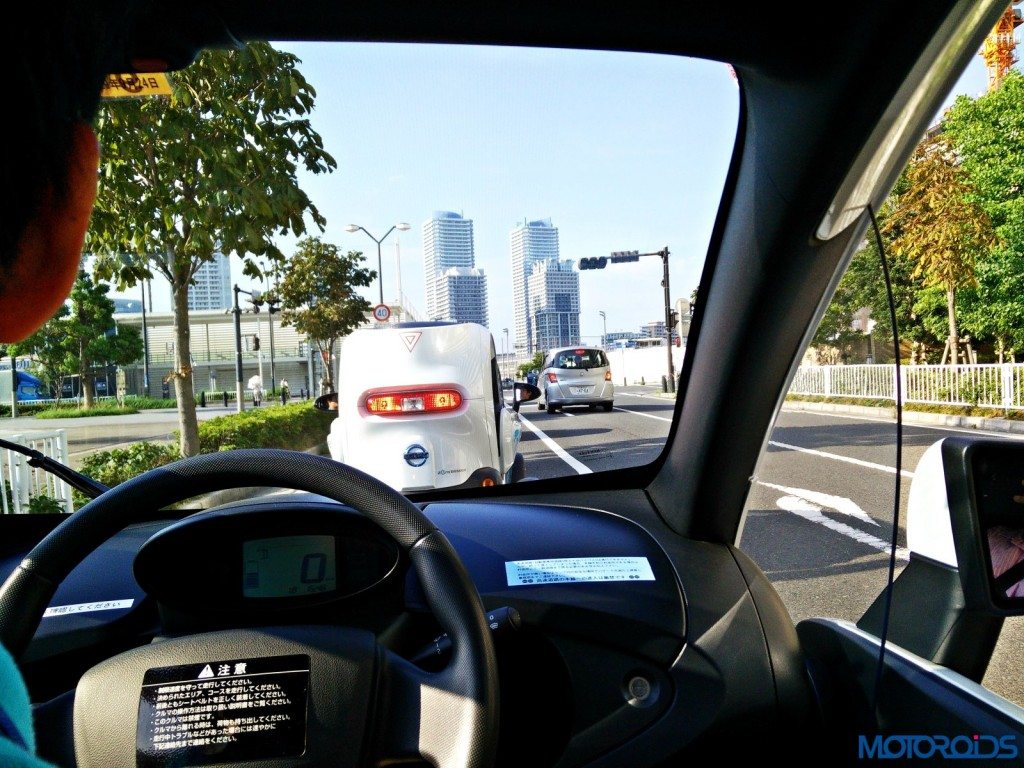 The battery operated machine is silent, and thanks to its electric motor, gets all the torque from 0 revs, offering strong acceleration off the line. The performance for city use feels solid enough, and the New Mobility Concept, with its top speeds of 80km/h should be able to handle whatever a bustling metro can throw at it with ease. Even with two on board, the vehicle didn’t feel out of breath for one moment, surging ahead reassuringly every time the driver dabbed the accelerator pedal. It may not be fit for the high-speed freeways just yet, but it should do just fine on stretches where the general average speed of the vehicles is not too high. 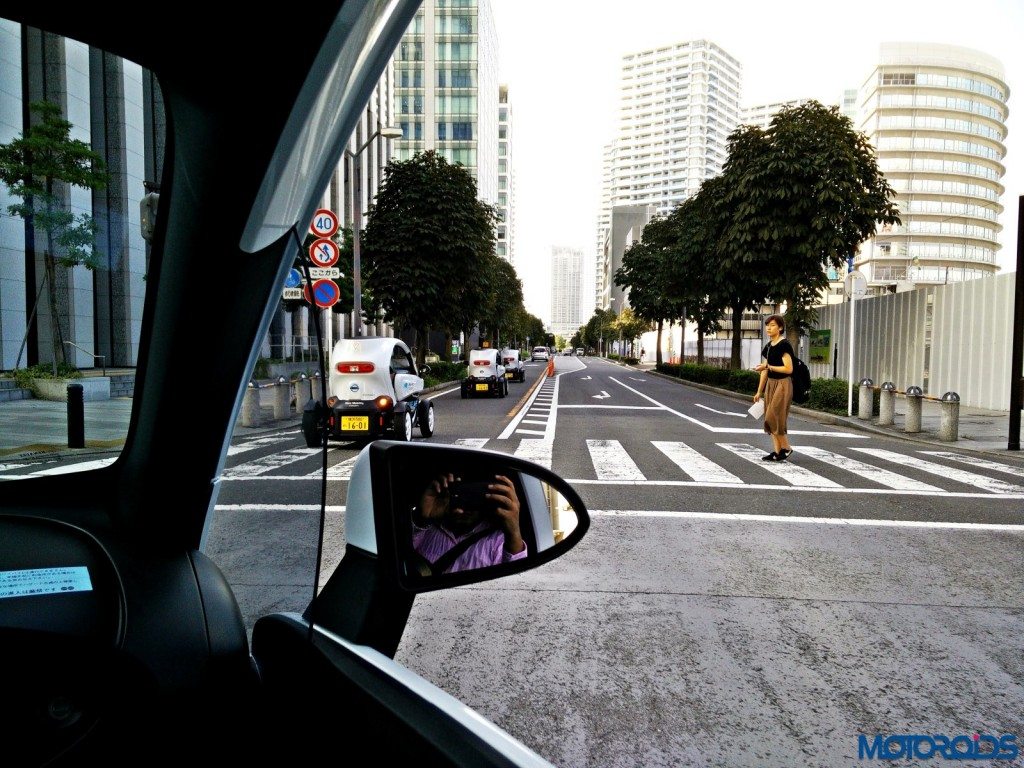 Compact dimensions and light weight mean that it’s easy to manoeuvre, easy to park and takes much less space than an everyday car on the road. The view for the rear passenger isn’t too open though, and one has to bend forwards to have an proper outside view from the sides. The longitudinal arrangement of the seats means that the rear passenger has to extend his legs around the adjustable front seat. The space is at a premium, and ingress and egress isn’t too convenient either.

What else should I know?

Here we have listed down all the details about the vehicle, and represented them through some images 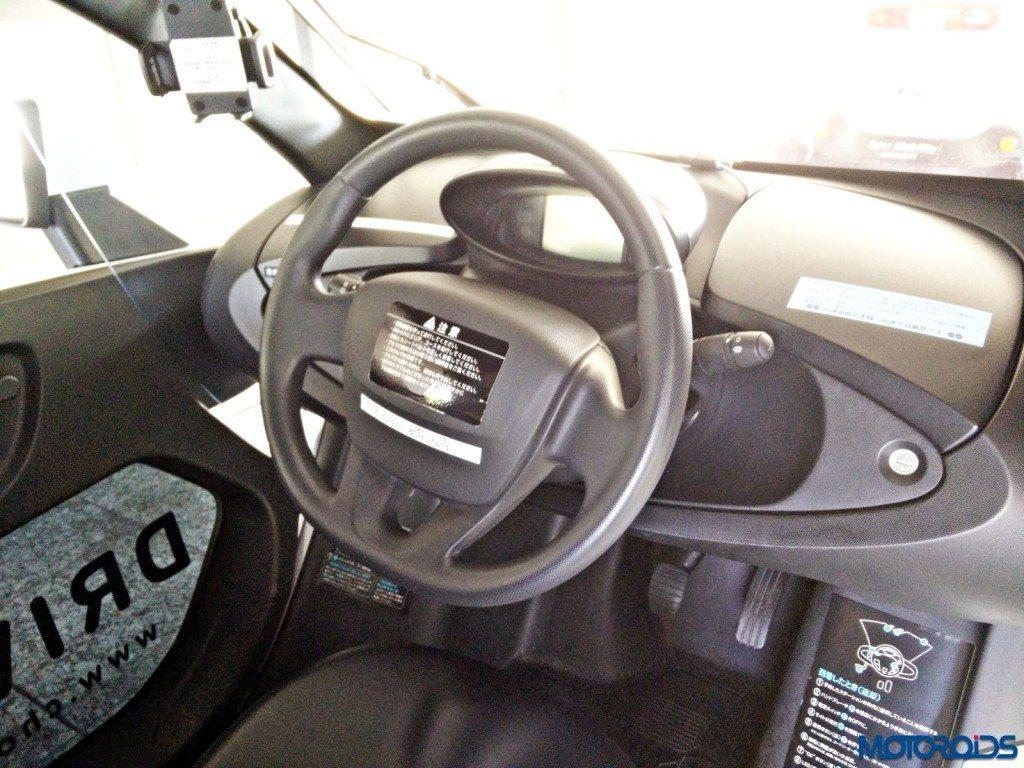 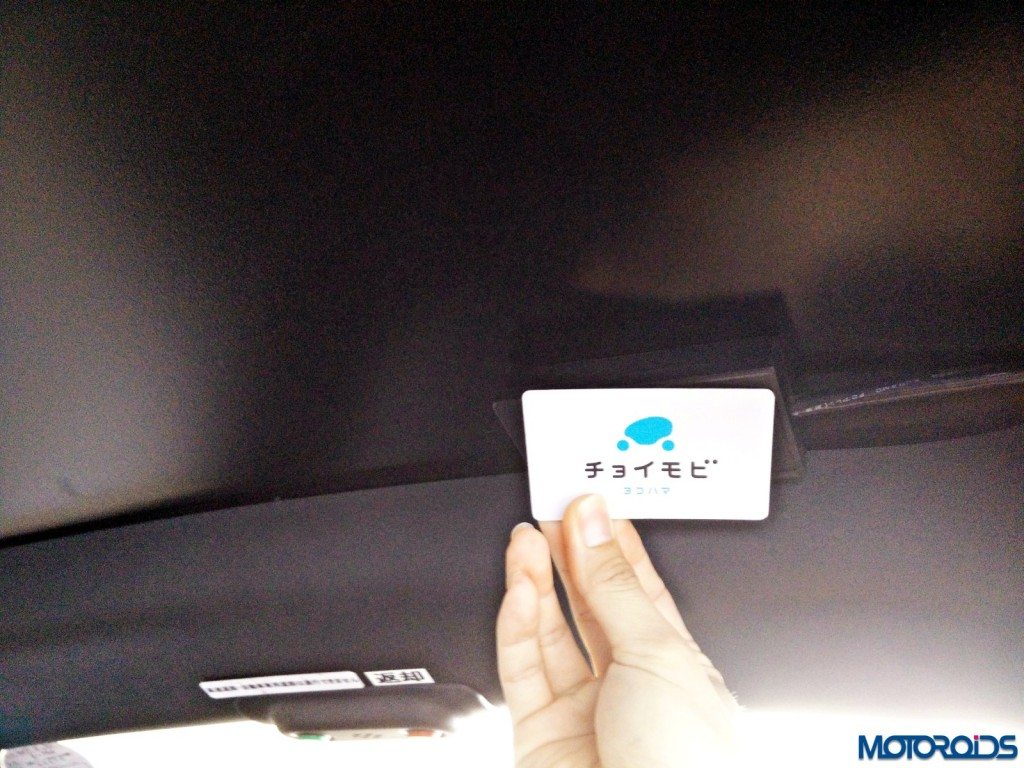 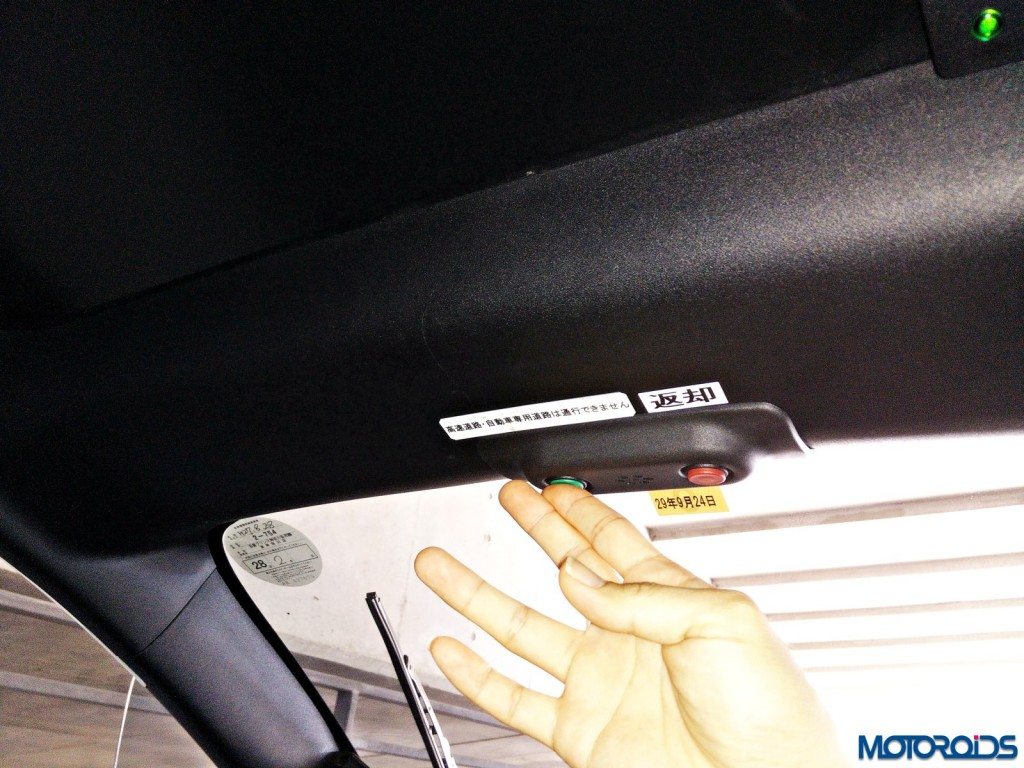 And then push that green button 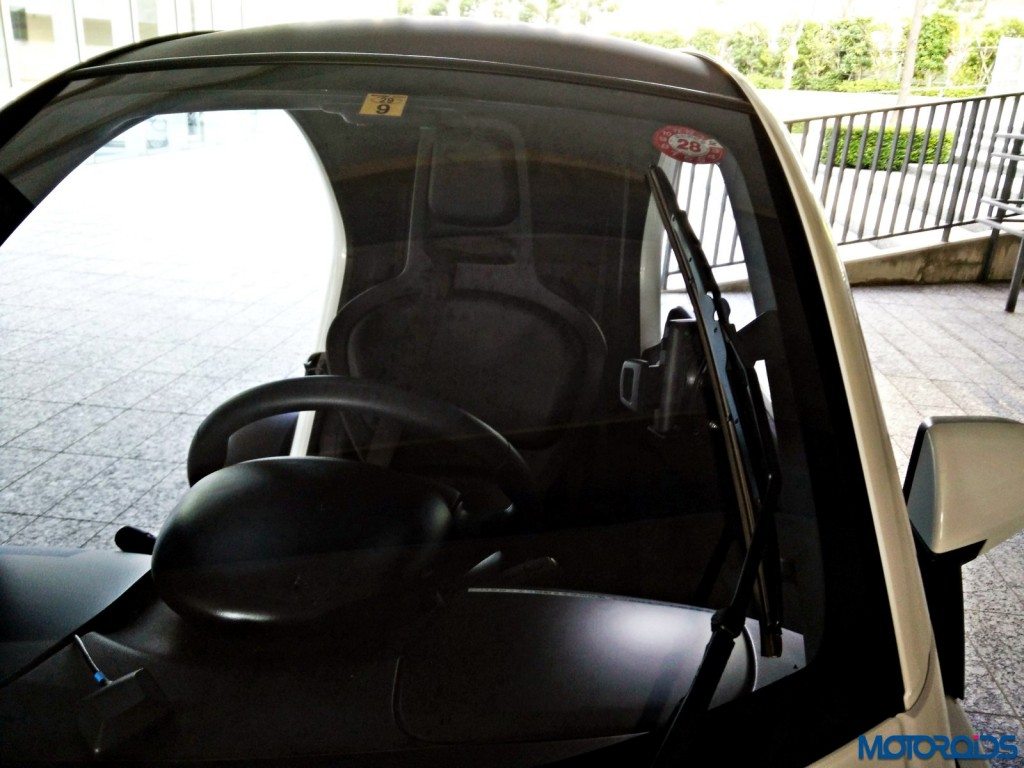 Single wiper for the windscreem 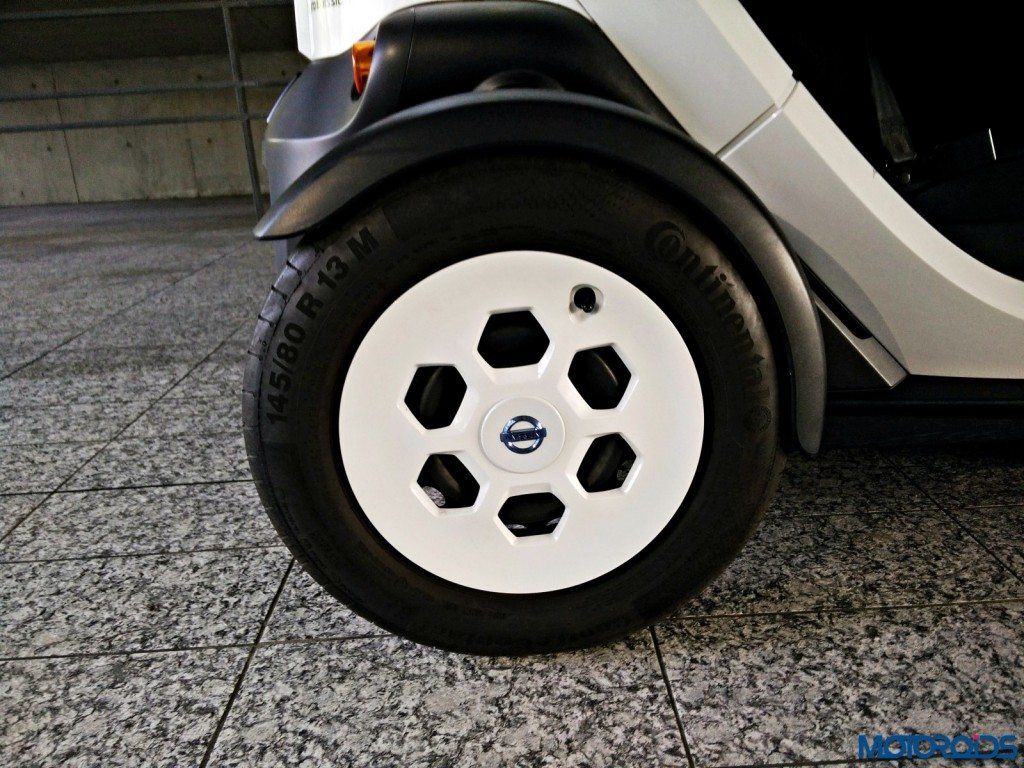 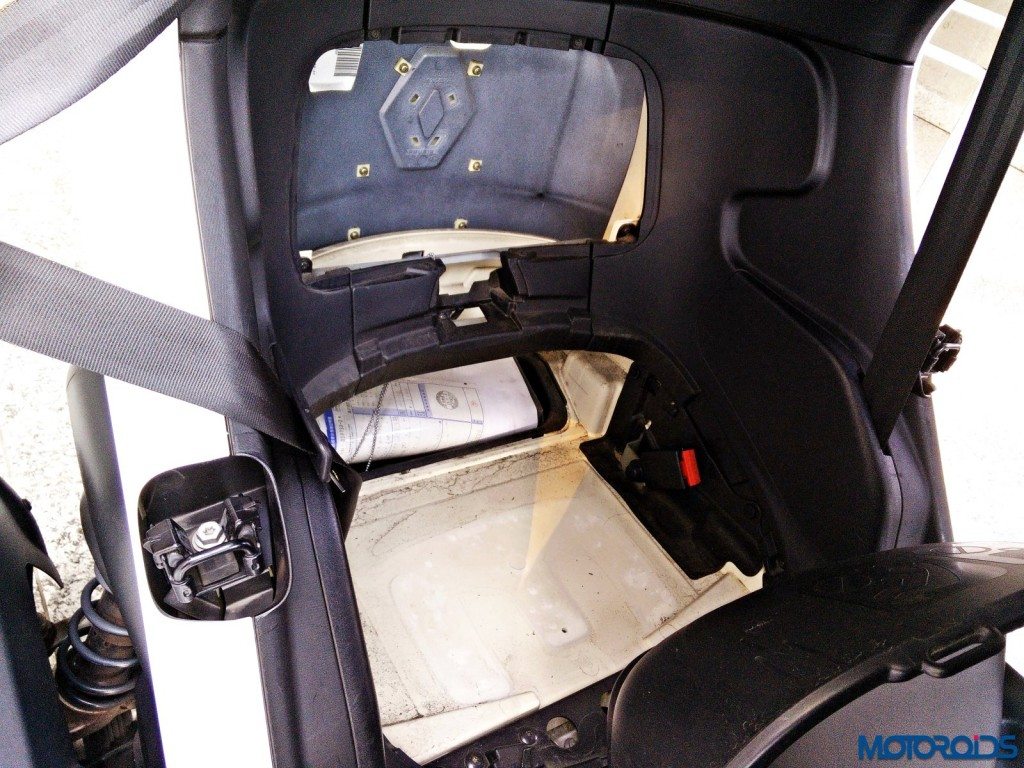 There is some storage under the rear seat, though it cannot take in much more than a small satchel 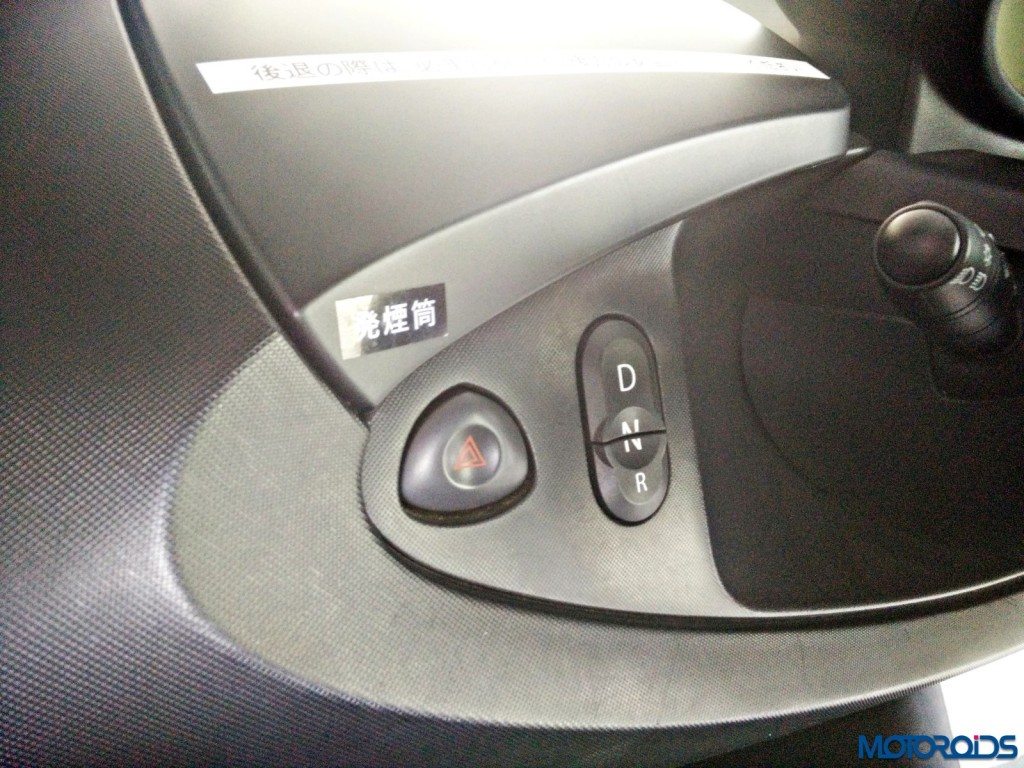 Drive, Neutral and Reverse, along with a hazard button – these are all the controls you’ll find on that dashboard 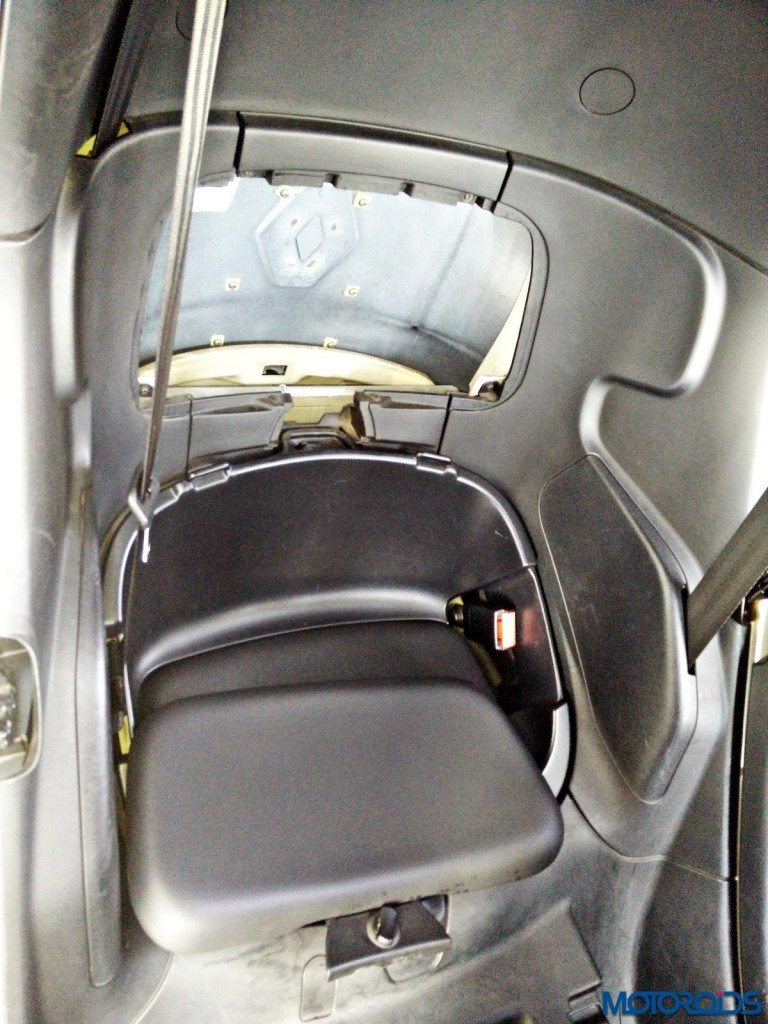 That’s the throne for the chauffeur driven – pretty basic, but Nissan haven’t missed out on a seat belt 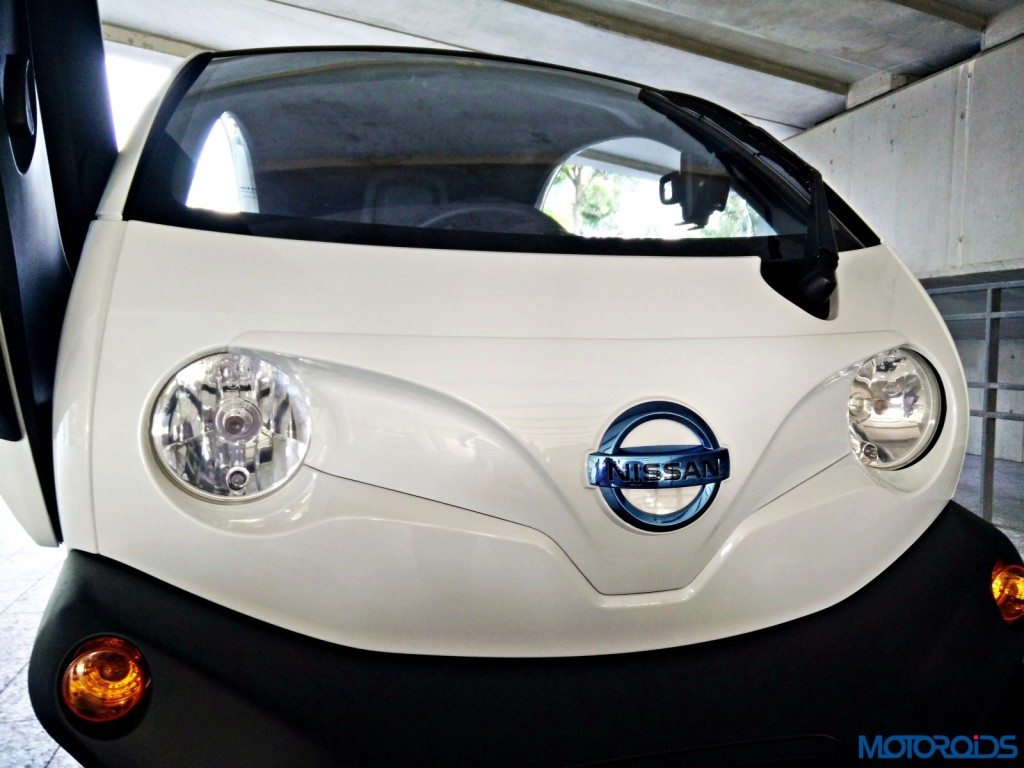 Front features twin headlamps and blinkers integrated in black bumpers. We love that shade of blue the Nissan emblem is done up in. 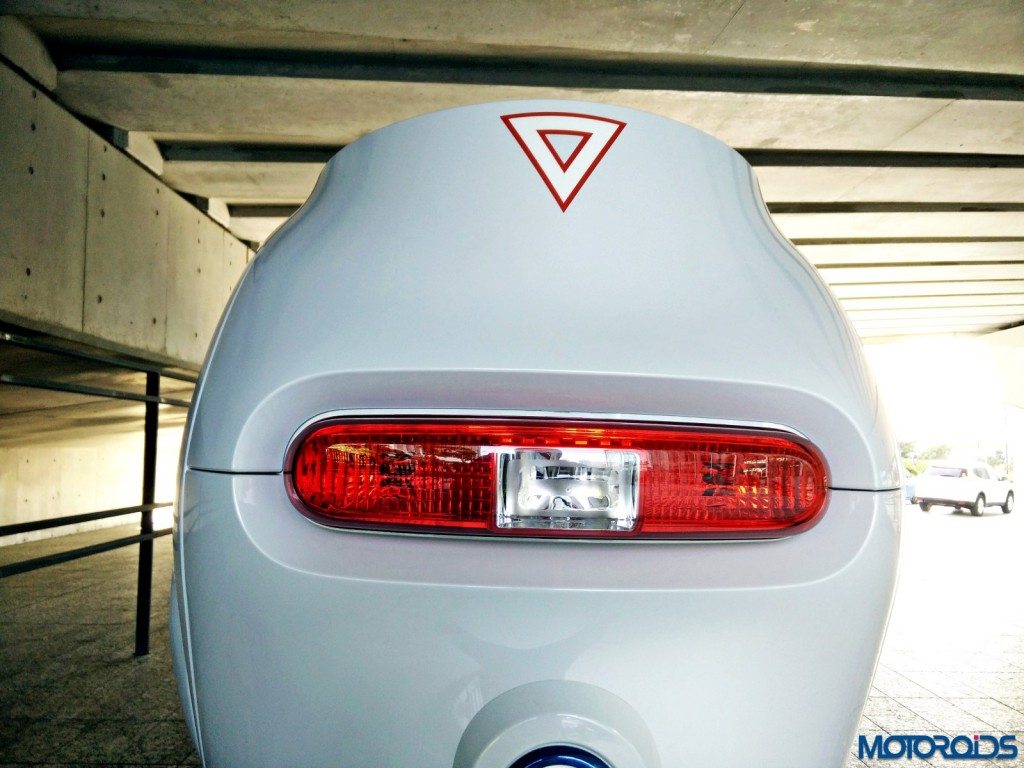 And that’s how the thing looks like from behind. We wish those swathes of white were replaced by a translucent polycarbonate material to let more light in 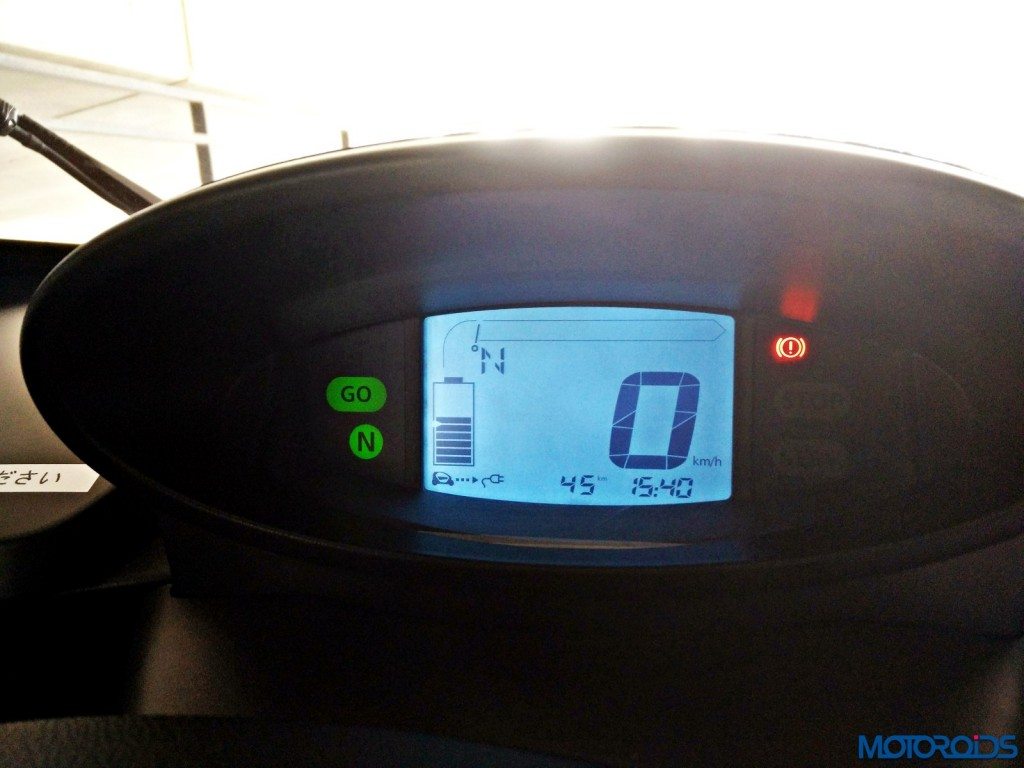 The simple instrument cluster shows a GO green light, meaning the batteries are charged, and the motor ready. The blue backlit screen shows charge, gear engaged, speed, trip meter and time. There is another unlit red light on the right, which stop you from pressing the pedal if the vehicle is not ready 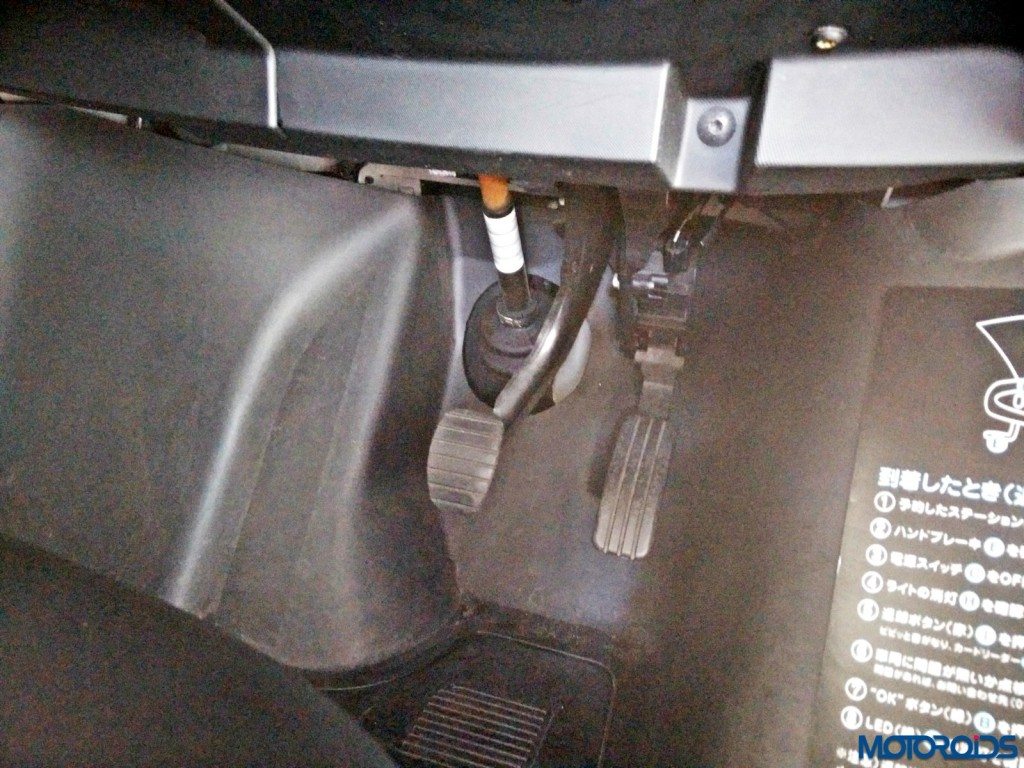 While the concept is a great stepping stone towards creating a personal mobility vehicle that addresses the problems we discussed at the beginning, it still has to go a long way before it becomes a definitive solution. To start with, the windows are not covered, which means that the occupants are still exposed to the elements. A fully covered shell, even with manual roll-up windows would have lent the concept a bigger advantage over two wheelers.

The ingress and egress for the rear passengers can be made a bit more convenient.  There isn’t enough space at the back.  Adding a transparent / translucent, polycarbonate material to cover the rear dome of the vehicle to let some light in should get rid of this problem.

Another issue is the lack of climate control. Since there is no air conditioning, the vehicle won’t be very practical to use in hot regions. The vehicle can also do with a more clever use of space, and allow for more storage space.

Would you agree that a personal mobility machine such as the Nissan Mobility Concept, after the addition of features we mentioned above would make for a valid and desirable vehicle for a wide majority of urban commuters? Why? Why not? Do let us know your thoughts via the comments section below, or give us a shout out on one of the social networks we are present on.