The Mahindra KUV100 has managed to disturb the dynamics of a segment which was characterized by sombre looking hatchbacks. Having offered the KUV100 as a crossover alternative to hatchbacks, Mahindra has delighted a huge chunk of customers who always wanted a rugged look and a reasonable capability to go off the road, but didn’t have the budget. The KUV100 does everything your everyday hatchback does, and much, much more. We have already done a pretty detailed review of the KUV100 covering almost everything you would want to know about it. We drove the car at the Mahindra test track during that time, though. This time around, we drove it in the real world and found out some rather interesting things about the youngest member of the Mahindra’s fleet. We loved a few things about the car, abhorring a few others at the same time. Here is a list of 9 things we loved and hated about the Mahindra KUV100 1.2 petrol 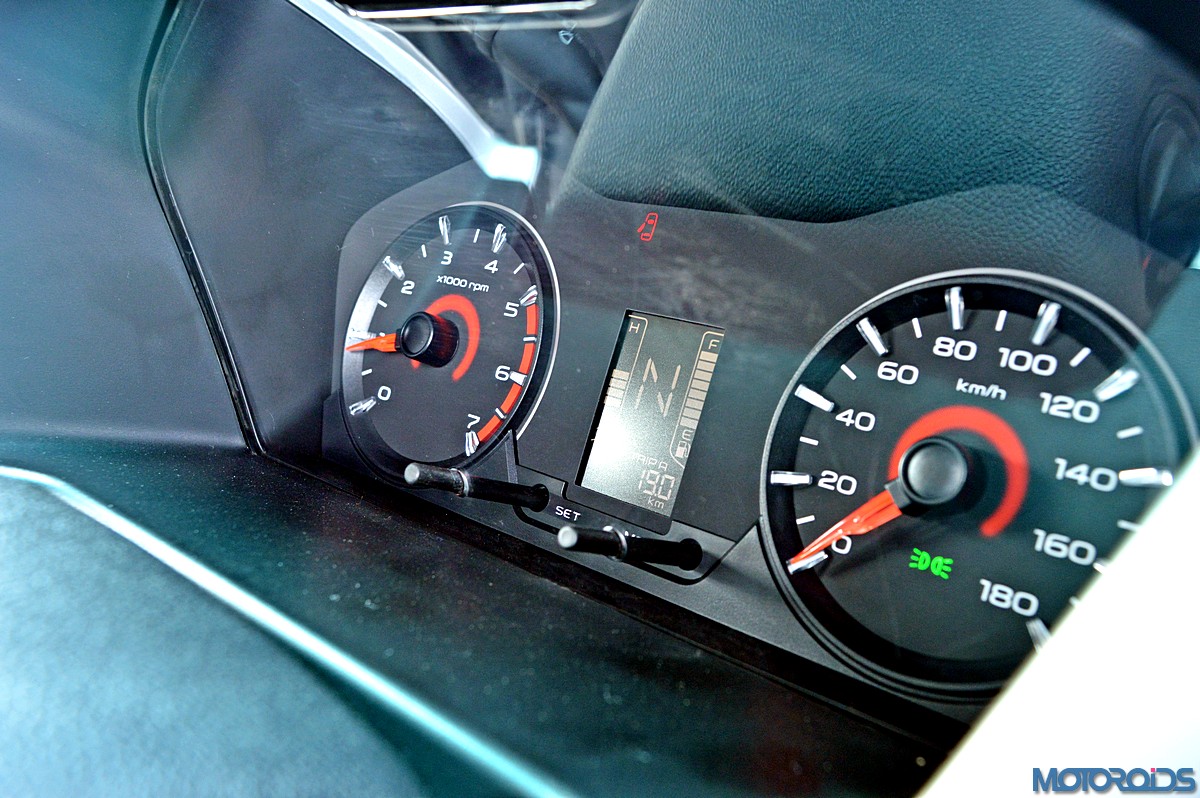 Mahindra has built that G80 petrol engine from the scratch, and in the process, have managed to lend it an aural note that we’ve rarely heard on any other car in the class. Three pot motors are known to be inherently imbalanced, and thus they boast a unique, burbly, sports car like sound. The Mahindra KUV100 has that sporty burble in spades. Push the engine beyond 4000 revs and it emanates a sonorous soundtrack which could befit a low flying topless beauty. For this class of a car, that trait is quite a heart-warming surprise. So enamoured were we with that sound, we held that engine by its collar and painted the tacho red throughout our test drive. Rev hard, upshift, repeat – that’s what we did all day long! 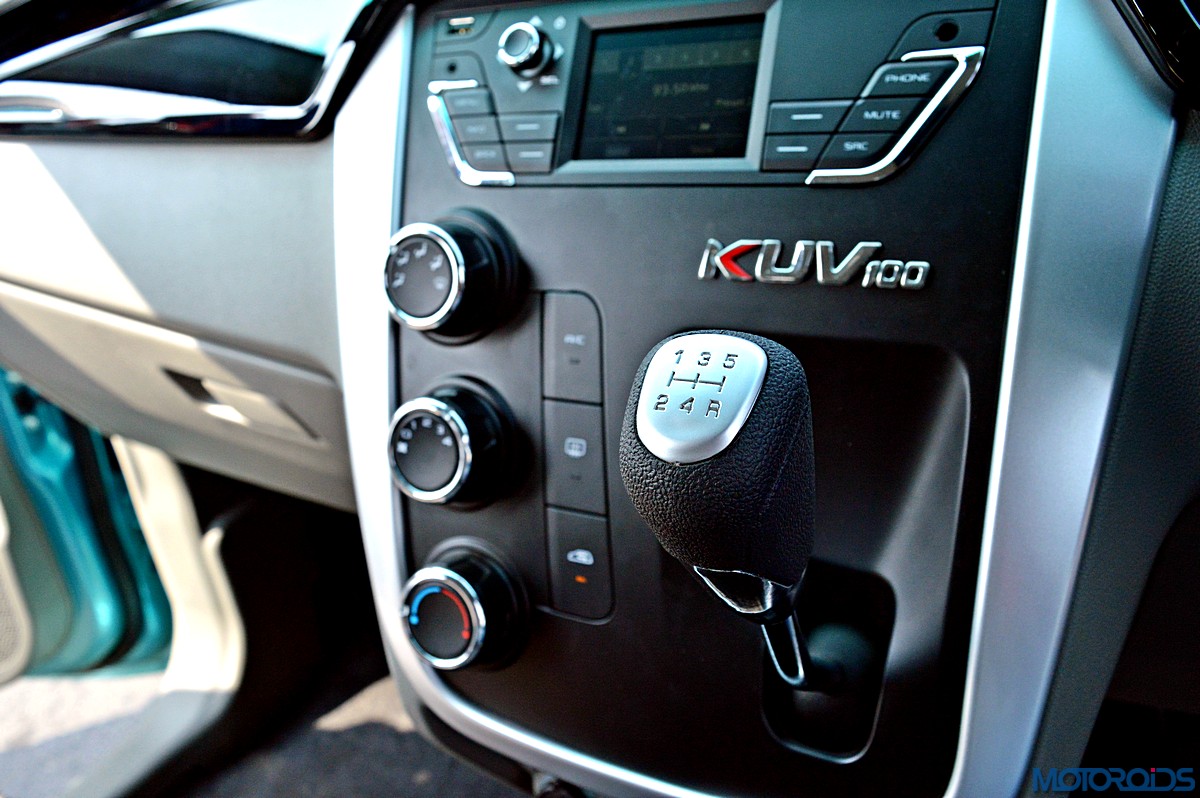 The position of the KUV100’s gear shifter isn’t quite usual, with the stick jutting out of the centre console. For the first few minutes of the test drive, we were seen trying to hold a knob between the seats when there was none. A while later, we were seen whacking the life out of that gearstick. Blame that burbly engine for the act if you will, but that gearbox itself had a role to play in its own harassment. It’s a slick shifting unit with short throws and crisp feedback. We couldn’t get enough of making the gear stick pass through those gates. 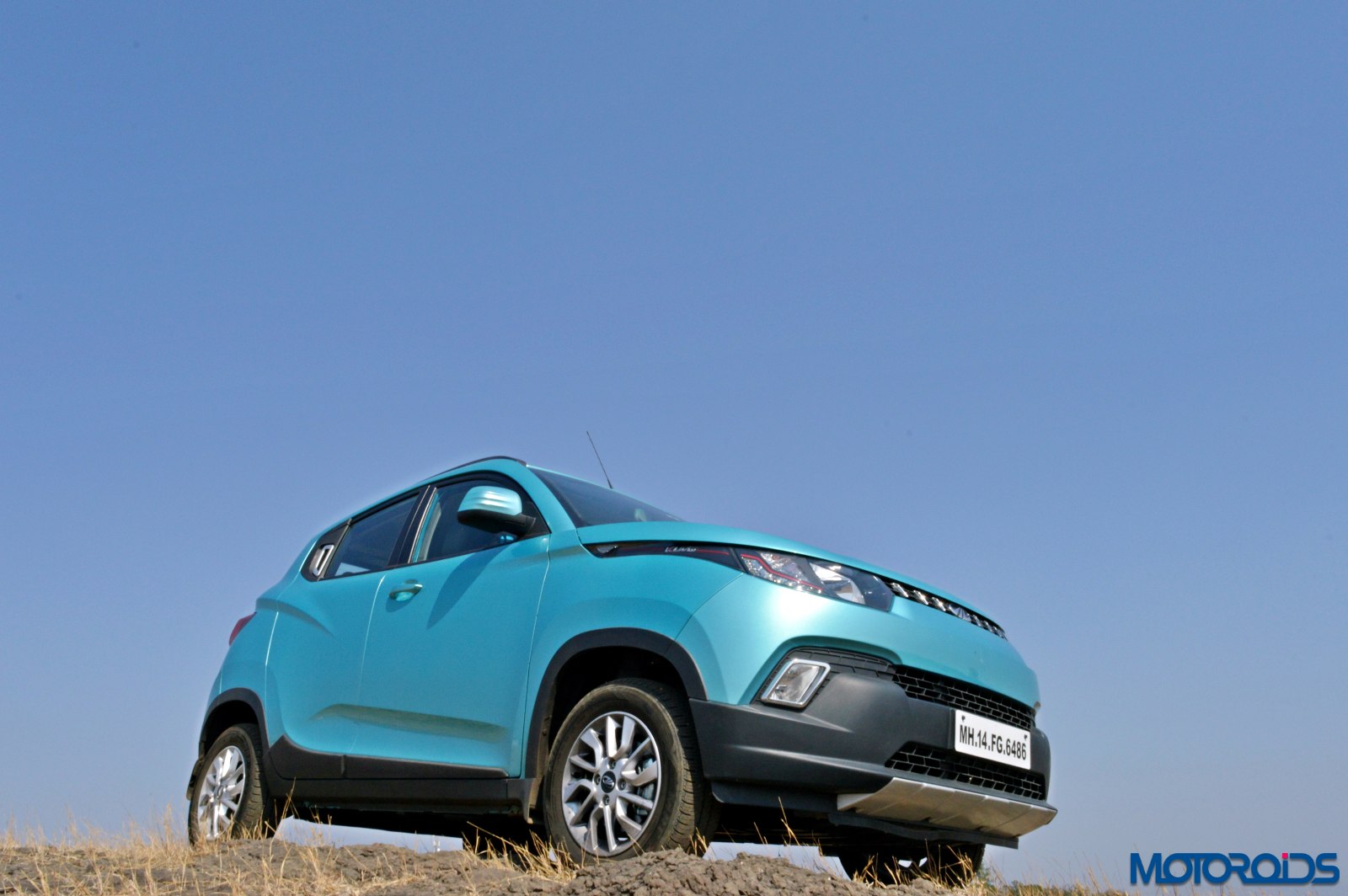 For the kind of price the KUV100 is offered at, it really radiates a rugged, solid, SUV-ish feel. You sit high up in that seat and the vehicle does manage to go over those broken patches of the road with a degree of nonchalance a hatchback could only dream of. While it may not be an off-roader per se, the high ground clearance along with the crossover layout does make you feel very confident taking it off the beaten trail. It can tackle bad roads and the odd trip off the tar without breaking a sweat – and did we tell you, it rides pretty well too!

Space between the front seats 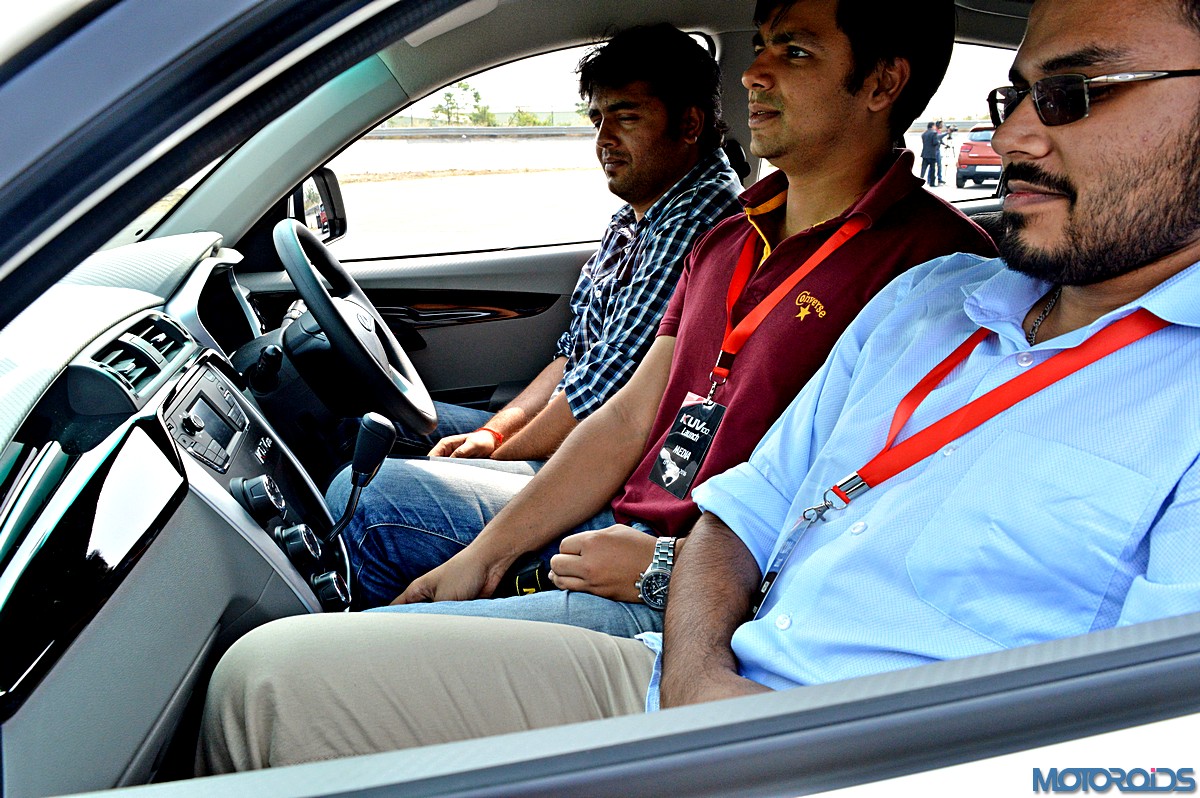 You must know by now that Mahindra is offering space for three in the front row. That’s optional though, and even if you don’t want that flat bench layout to rest the third posterior, you’d be delighted. Why? Mahindra has sent the handbrake to a place beneath the centre console, and since there’s no shifter stick either, there’s a lot of space left. It really is the most amount of open space to play with you’ll get in a car in this segment. Wallets, cell phones, keys, chargers – throw anything you wish in that abyss, and you’ll still have space left! 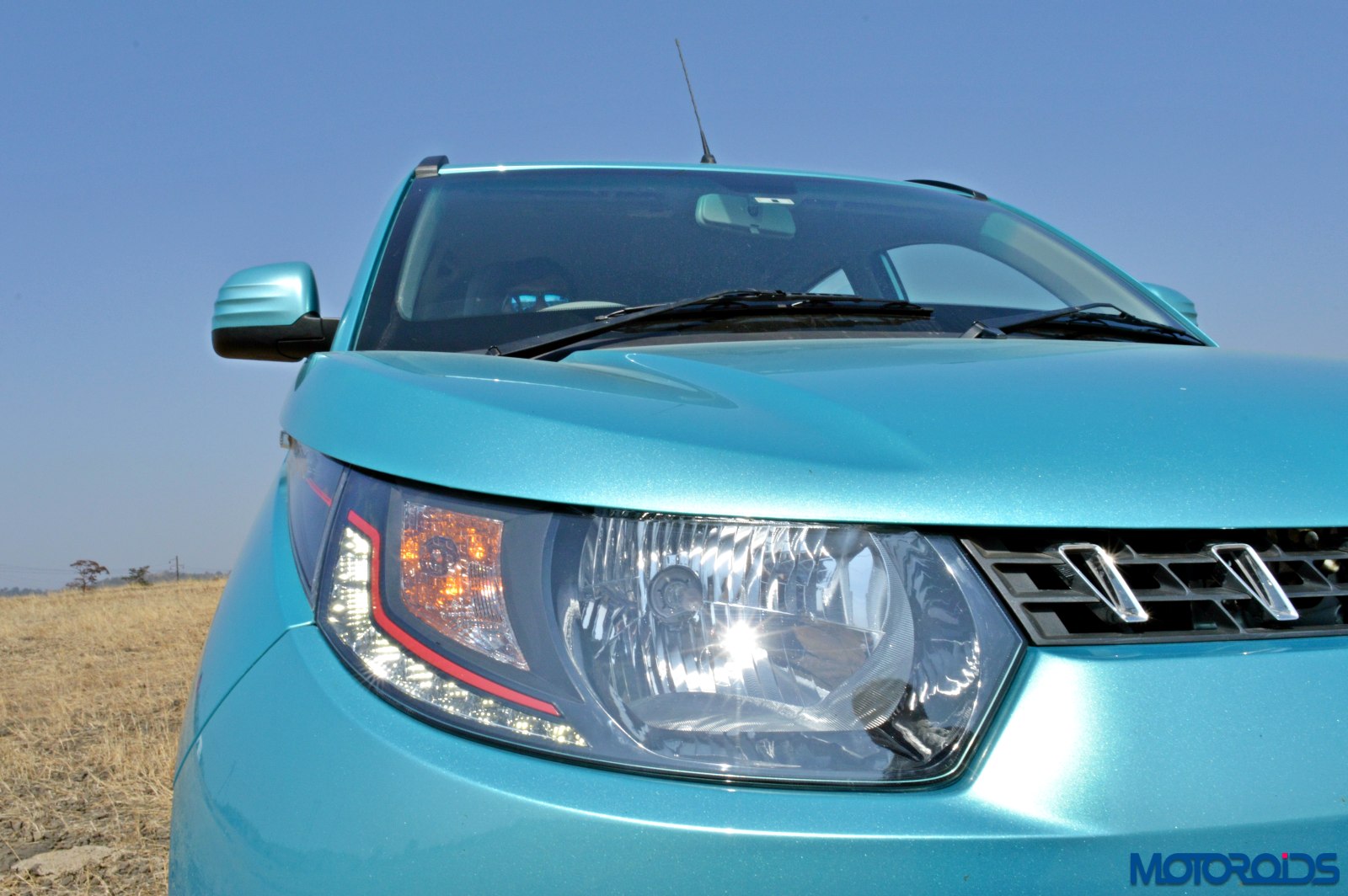 Doesn’t that metallic blue shade we shot this car in look smashing? We absolutely love it. Bright, young, classy and lively – the KUV 100 stands out from a sea of red, white and silver in that stunning new blue shade. Oh, and we love that red highlight in the headlights too! 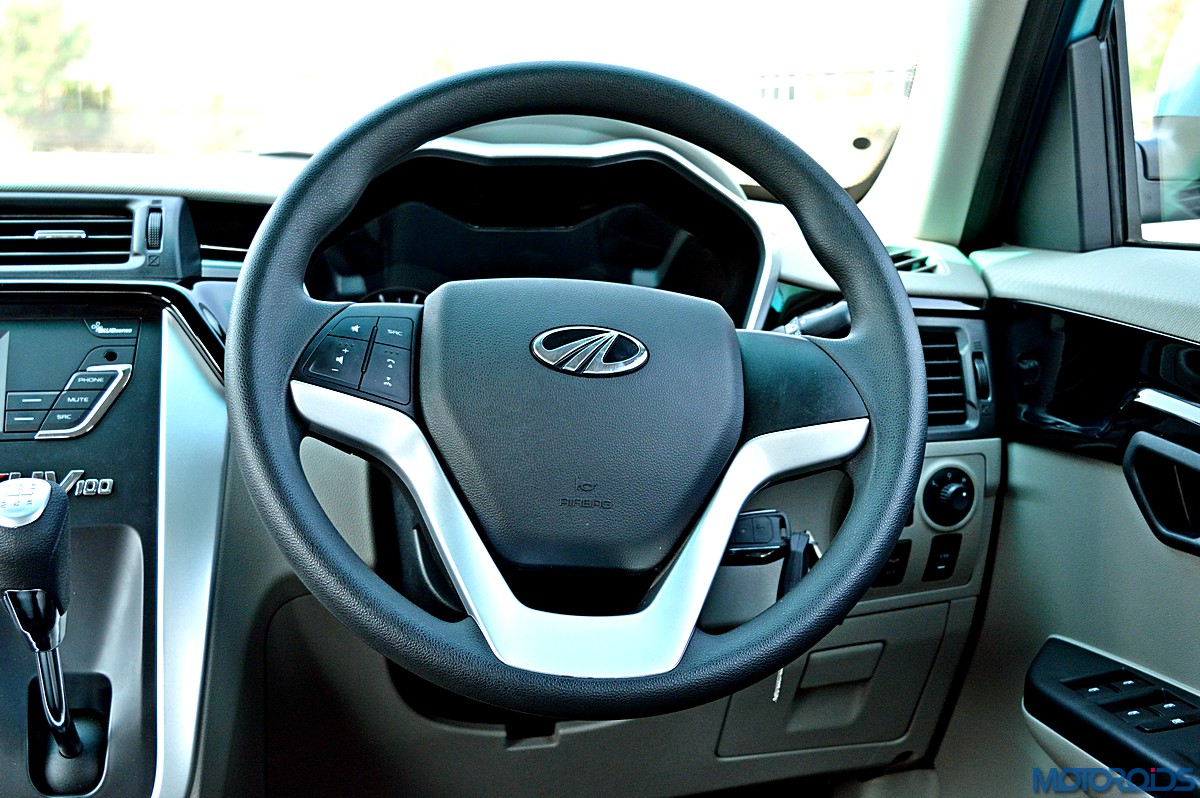 The KUV100, surprisingly, came across as more composed and taut than we expected around corners. We expected it to roll and wallow like the Quanto or the Xylo but seems like Mahindra have learnt their lesson, and this one actually manages to hold its line rather well. That steering, though, is a dud. It’s lifeless and completely inert at dead centre. You can actually turn it a little bit while driving in a straight line without any effect on the car’s direction. It’s devoid of feel and precision and is one thing Mahindra can really work on improving about the KUV 100.

It’s designed on the sides 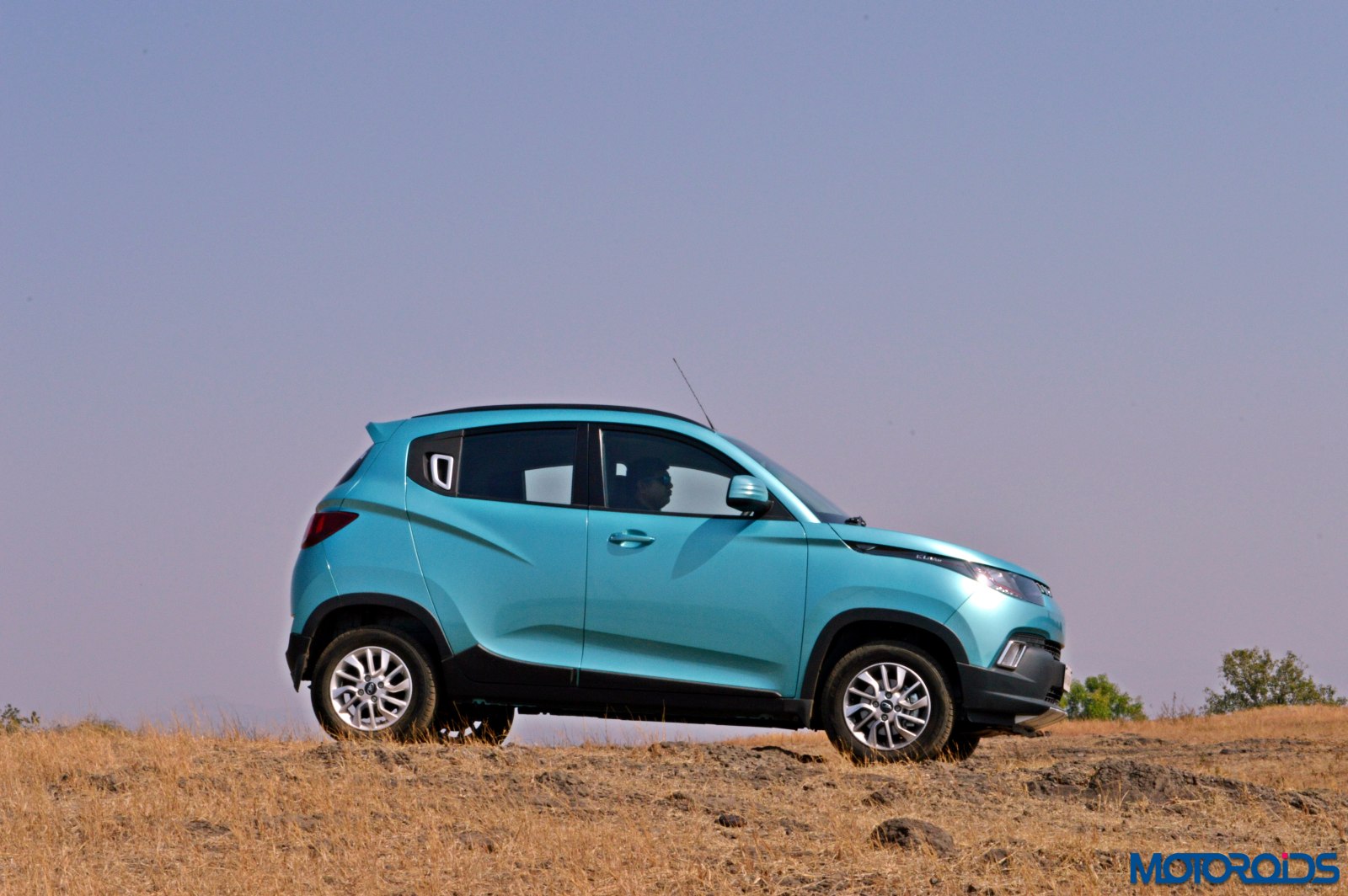 Who wouldn’t agree with us? Let’s give it to Mahindra, the front end looks nice. In profile, all the way till the B – pillar things are pretty inoffensive too. However, that obtuse crease on the haunches, that unwarranted slope in the roof and the abruptly short rear section make the KUV 100 look abrupt and disproportionate in profile. We really hope that the acquisition of Pininfarina bails Mahindra out of such blunders in design and detail. 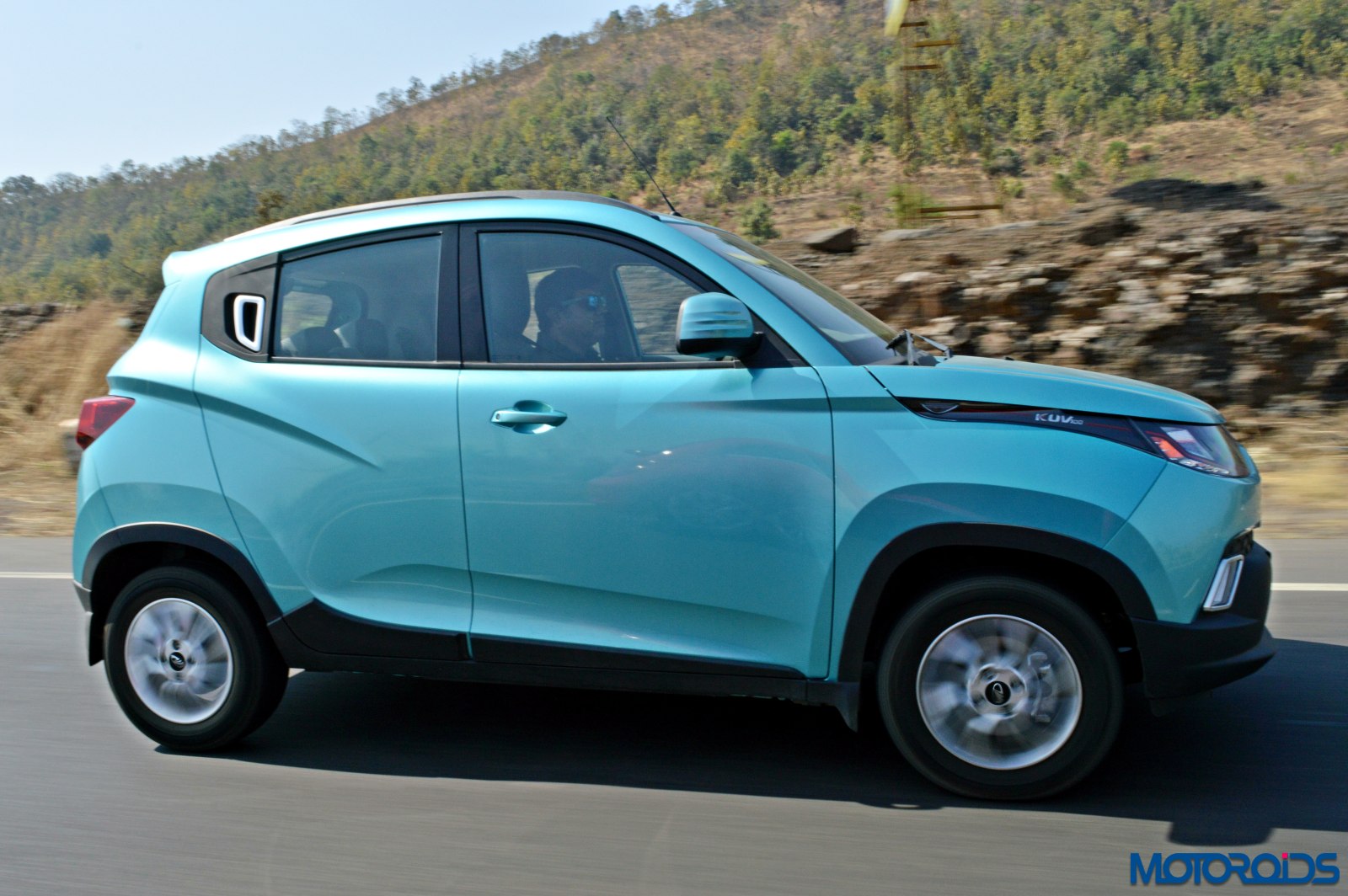 Throatily exciting that engine sure is, but it isn’t the most refined unit around. Even while idling, you can hear its sound inside the cabin, the gearstick keeps getting those mellow vibes and the decibels keep going up with the revs. That we love the sound post 4k revs is another story, but looking at it purely from a refinement perspective, that engine can probably do with a bit more smoothness, since it is out to please peace-loving, submissive married men, and not raunchy scoundrels like us. 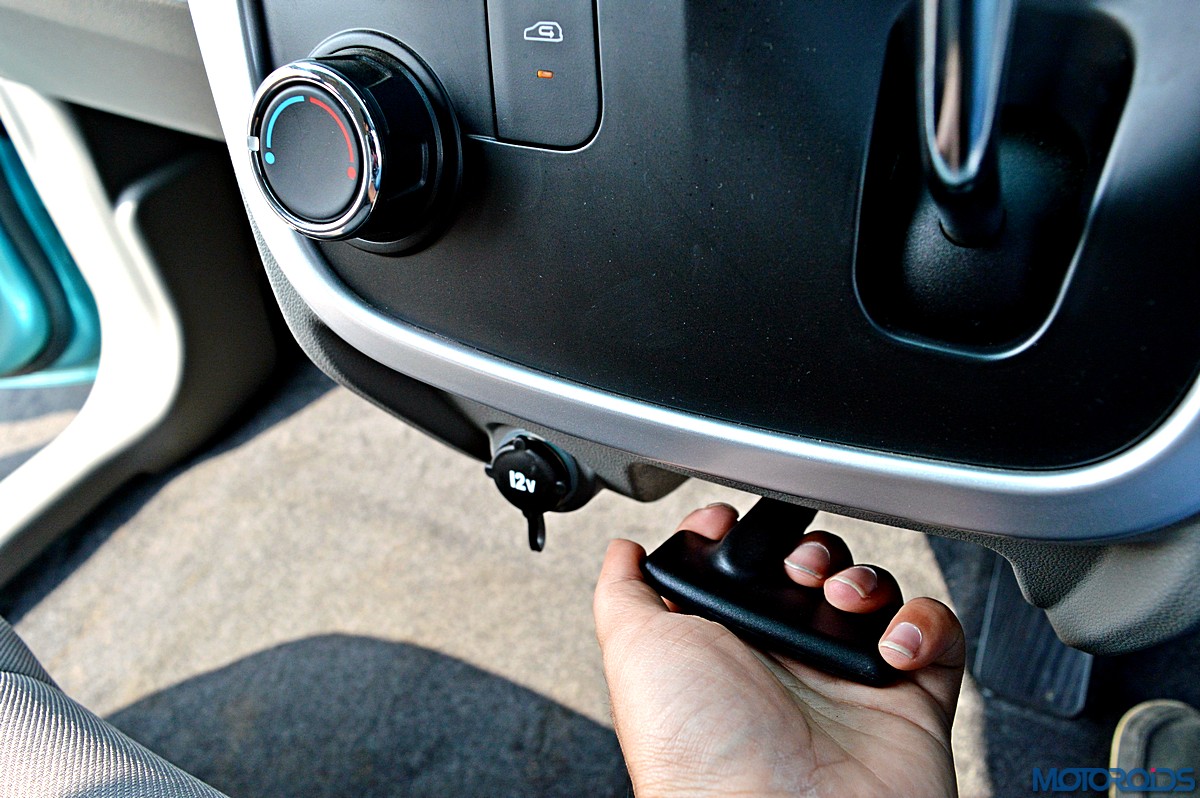 Thank you, Mahindra for liberating that space between the seats by moving the handbrake elsewhere, but you probably could have made that handbrake work like it should too. It’s an agricultural setup wherein you have to pull that baton-like lever towards yourselves to engage. Honestly, we are fine with that part, though it does make some unpleasant creaking noises as you’re performing the chore. However, disengaging the brake can be a pain sometimes, as the stick would sometimes just refuse to go back into its burrow. Even when it does, more often than not it travels back just halfway, leaving that handbrake engaged sign lit on, on the instrument cluster. While not a deal breaker or a big annoyance, that handbrake could most definitely have been executed better

We’re sure you have your own list of things you love or hate about the hot new compact crossover on the block. Do share your opinions with us, and we might just use a few of them on our social network with due credits to you. Share your thoughts via comments or through one of our many social pages. Check out an image gallery of KUV 100 below