The ES 300h is the only sedan in Lexus’ portfolio for India as of now. Like the LX and the Landcruiser, there are parallels being drawn between the Camry Hybrid and this one too. However, as we found out, the Lexus ES 300h is a different car on many counts. The two cars might share a few veins, ventricles, and the heart too. But their souls are different, the behaviour certainly is, and how they make you feel in their company is very, very different. Read on… 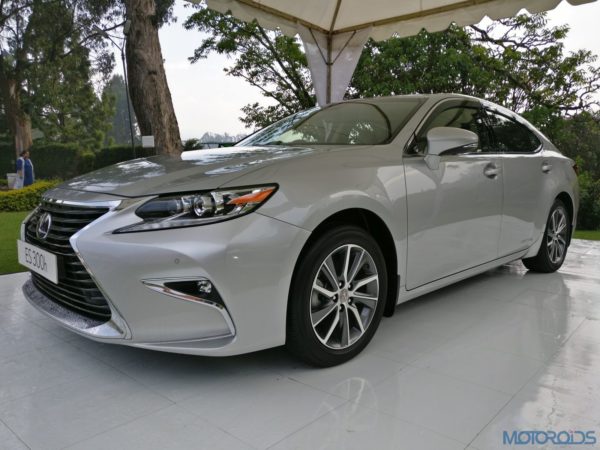 The tree-hugging heart that propels the Lexus ES 300h is a 2.5-litre four cylinder petrol motor that cranks out 160 PS at 5700 RPM and 213 Nm at 4500 clicks. The hybrid system’s motor is good for 143 PS and 270 Nm of torque. The two power sources combined, the system develops 205 PS of power. Apart from helping you do your bit for the environment, the ES 300h will only sip a litre of petrol for every 17.7 kilometres it moves forward. 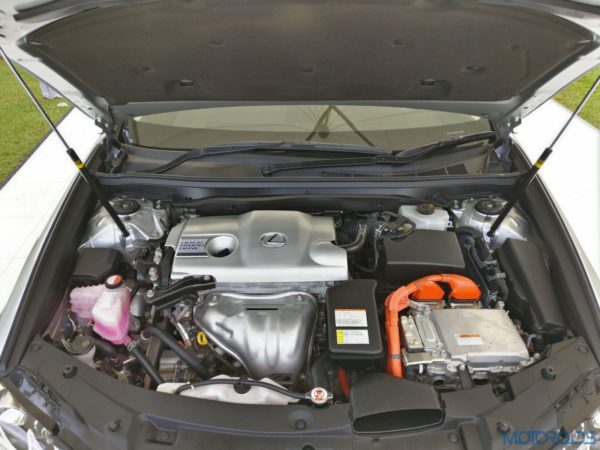 However, where the same setup in the Camry feels somewhat robotic, it feels like it has found some life under the ES’ hood. Provided there is enough juice in the nickel hydride batteries, the ES can make tip-toe in pure electric mode, but only for a few kilometres. And that too when you treat the throttle like you’d handle a newborn. Mash it, and the ES can do a 0 – 100 run in 8.5 secs. 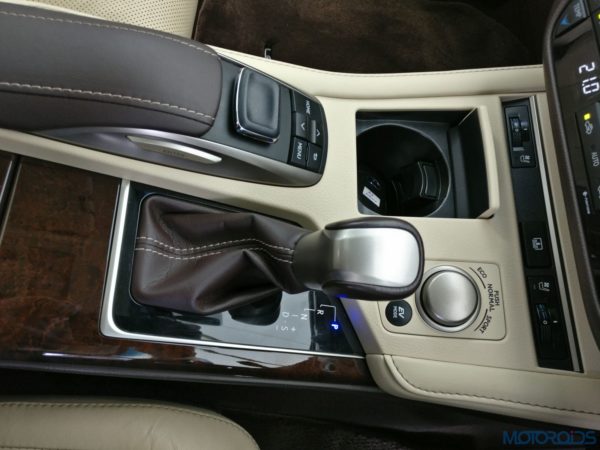 One the move, throttle responses are crisp and lag-free, especially in Sports mode. ECO mode works as it should and makes things feel slightly restrained. It isn’t a slouch, but the ES 300h brings out the relaxed driver within you, who’s got necks of other focused machines in the garage to heckle. The steering wheel feels great to hold and is precise when you call for that Sports mode and throw the sedan around corners. While you’re doing that, dialling in higher revs will make some of the engine’s high notes to filter through the cabin, but that’s the only sound you’d hear from outside. 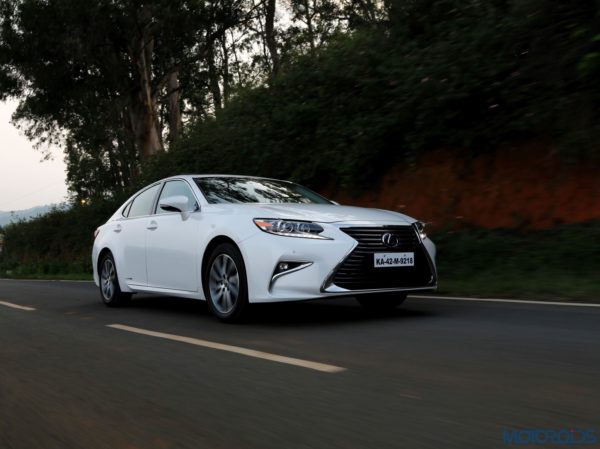 The Lexus ES 300h is a luxury focused product and it shows in its ride and handling characteristics. The cabin is superbly isolated from all the rubbish outside, and the chassis and suspension have been tuned to do just that. The sedan handles bends in a regal but composed fashion, given the fact that it unabashedly focuses on ride quality, and it succeeds in that aspect very well. 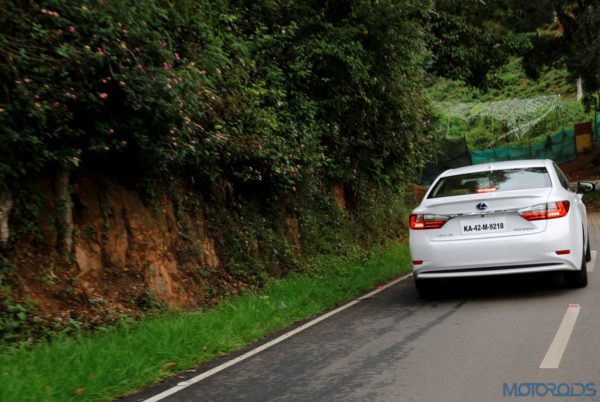 The suspension absorbs undulations brilliantly, especially when speeds go up, which is when the ride gets even better. Damping feels slightly inelastic at low speeds, but adapts exceedingly well to the surface and makes things plush once momentum is up. 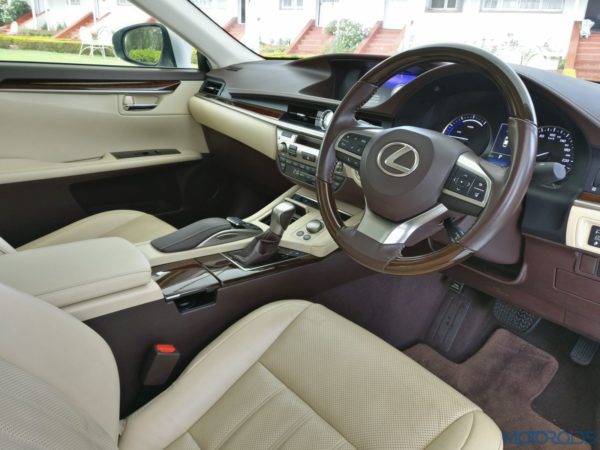 One sits sort of low inside the Lexus ES’ cabin. However, the low set, horizontal dashboard brings width into the picture. The steering wheel has been wrapped in fine leather and wood, while the seats are superbly padded, get inbuilt ventilation and are accommodating. 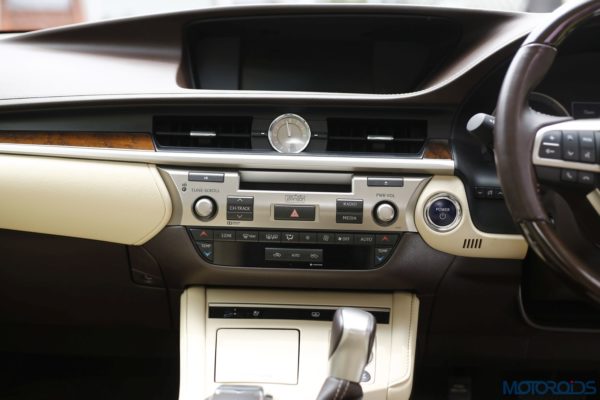 However, switches on the centre console felt slightly yesterday, especially after what we sampled in the RX and LX’s cabin. You do get a LED lit, classy, analogue clock, a premium 15-speaker Mark Levinson audio system which sounds fantastic, and 3-zone air-conditioning. Opulent use of leather with some sprinkling of wood makes things feel rich and fit and finish lends everything with a sense of finesse. 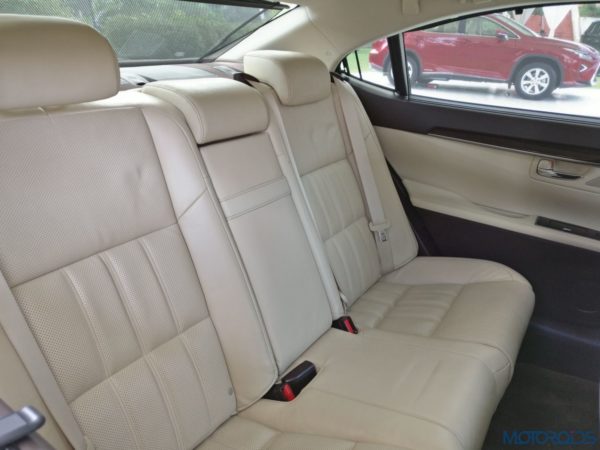 Rear passengers will find ample amount of all-around room and will feel pampered – courtesy of sun blinds on the rear and side glass, including that on the quarter glass too. The central armrest can be flipped down to reveal inbuilt controls for the blinds, the stereo and temperature. 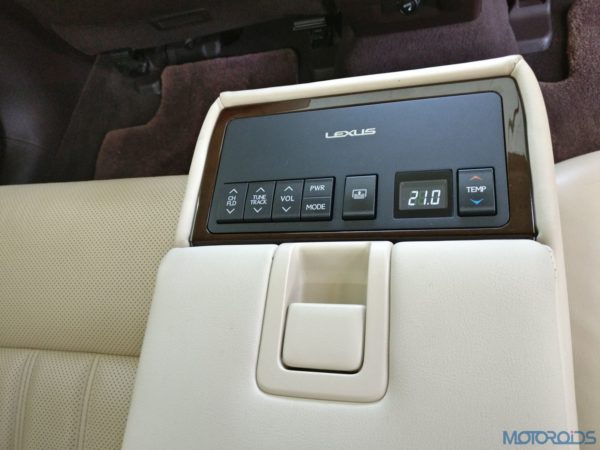 Here’s a bummer though. Where the Camry gets a reclining backrest for the rear seat, being a luxury proposition, the ES 300h misses on that feature somehow. 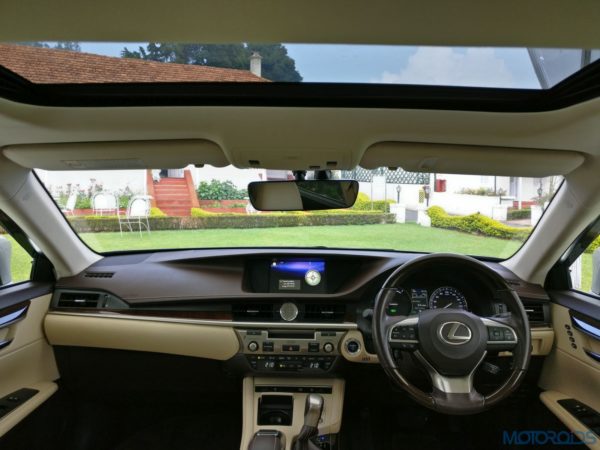 If and when the need arises for you to look up to the sky for any reason, there’s a sunroof too. The ES gets 10-airbags, vehicle stability Control, hill start assist, a rear parking camera and a tyre pressure monitoring system. 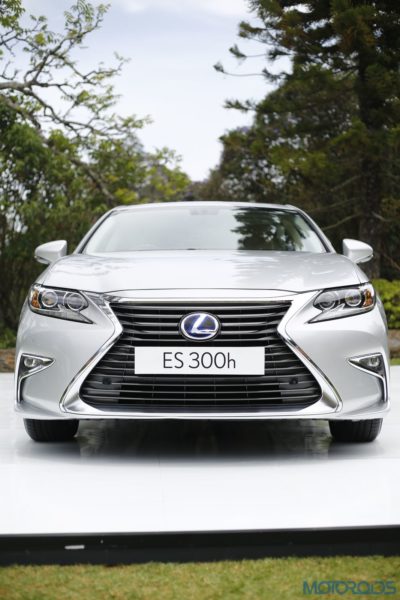 The Lexus ES 300h sits rather low and its visual energy encompasses a blend of both sporty and luxurious. Up front, the trademark spindle grille is accompanied by a sharp looking headlamp cluster which features LED illumination. 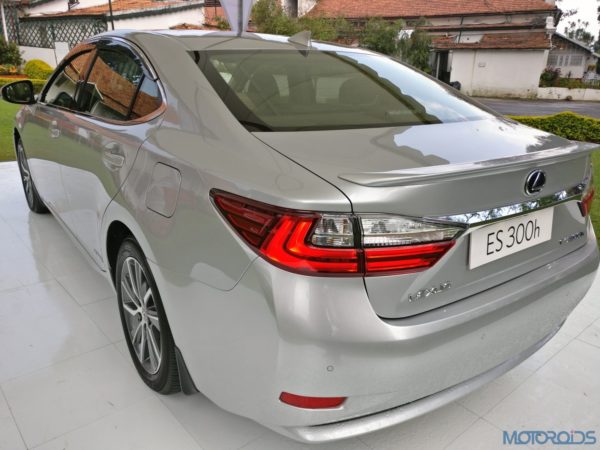 The ES’ styling makes it look grand, courtesy of those large bumpers which amplify every stage of this 3-box sedan and the longish wheelbase which goes a long way in conveying that this Lexus tilts towards the luxe life. At the rear, L-shaped LED illumination sets the ES apart, along with a boot spoiler that tries to make things look sporty. All in all, the ES 300h looks purposeful and just what a proper luxury sedan should look like. 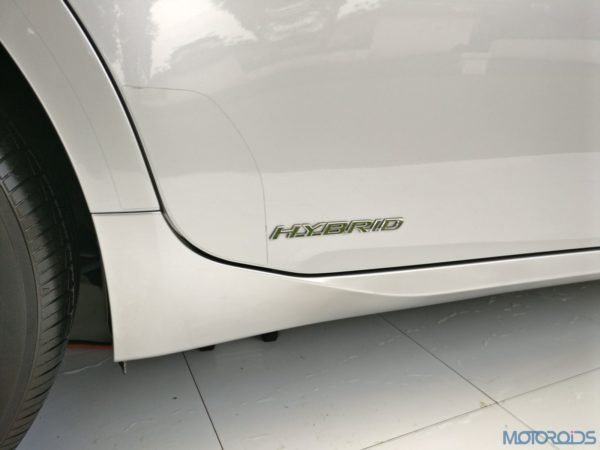 A subtle hint of the future 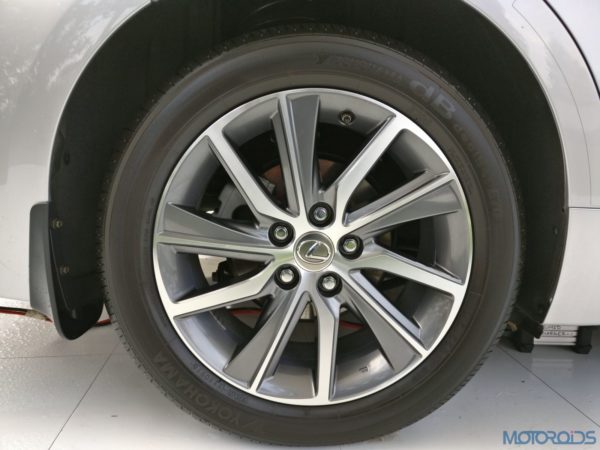 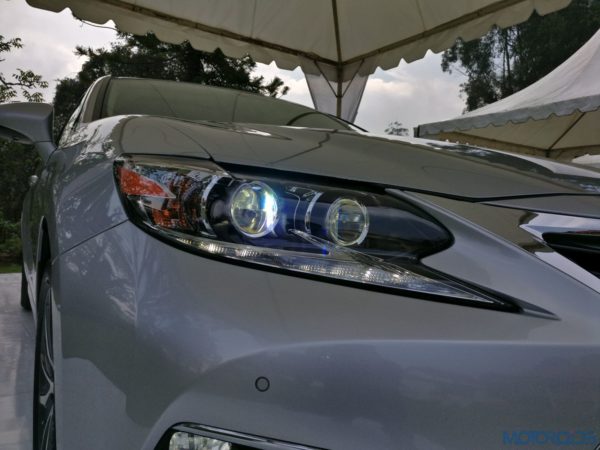 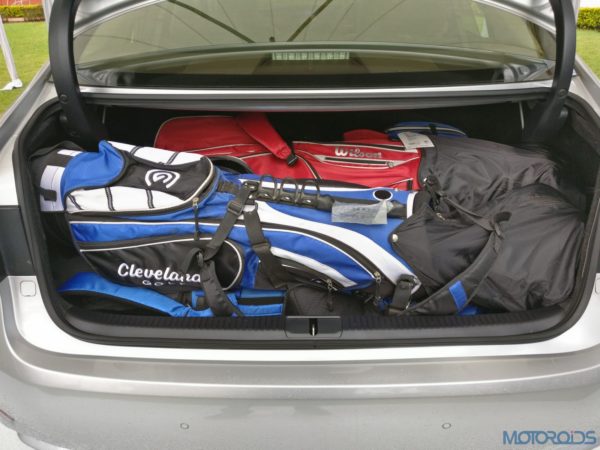 That’s all the Golf this Lexus can swallow 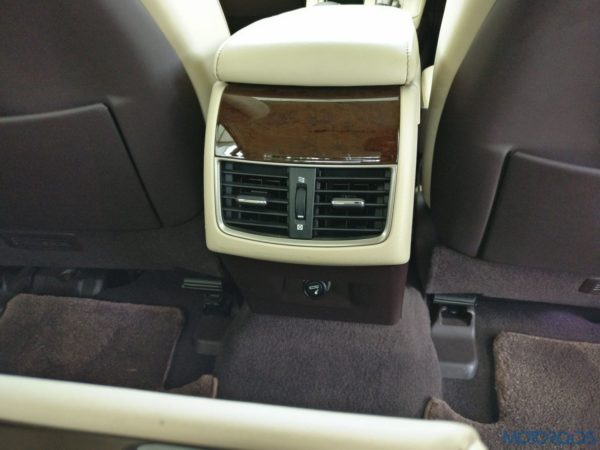 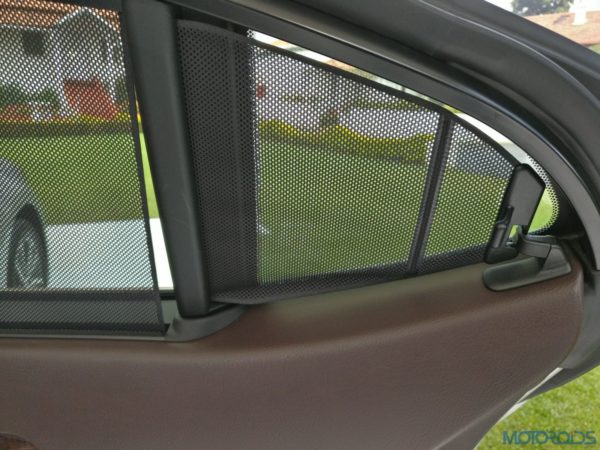 They’ve got you covered on all sides 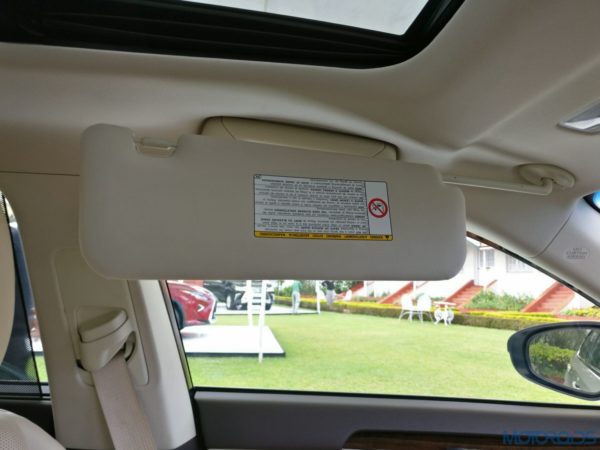 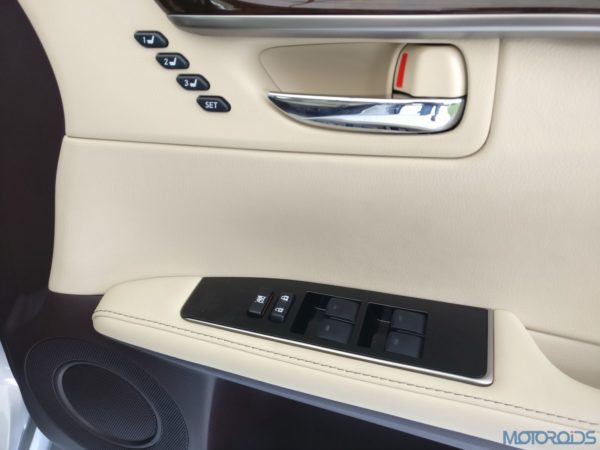 A few bits look out of place 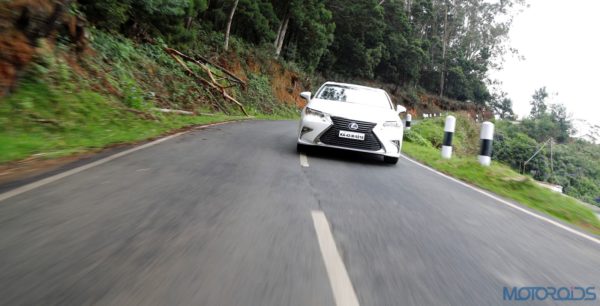 The Lexus ES 300h will appeal to those who wish to stand out as folks who are considerate towards the environmental cause, but at the same time, seek luxury, and a moniker that is unambiguously accepted to be regal. Japan’s finest will also offer an alternative to those who wish to move away from the German trio and need something new. Something that they had only heard about or experienced elsewhere until now.