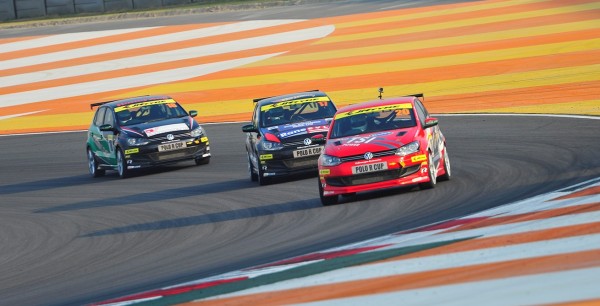 Jeffrey Kruger continued to dominate in the Volkswagen Polo R Cup as he won Race 1 ahead of his sister Robyn Kruger who is a guest driver for this round. Rahil, who was standing second on the Championship standings before this round, finished third, ahead of Prashanth Tharani, who was the leader in Championship Standings before this round. Starting from the pole position, Jeffrey pulled away from the pack from lap 1 and kept on increasing his lead to eventually win the race comfortably.

Jeffrey starting on pole had a great start and led off the grid. Robyn had a better start and was side-by-side with Jeffrey as they entered the first corner. Jeffrey managed to stay ahead and started to pull away. Behind him Robyn, who started second on the grid, just managed to stay ahead of Rahil Noorani (started third). Championship contender Rahil Noorani attempted to put pressure on Robyn but to no avail as she started to pull away. Behind them Prashanth Tharani Singh (started sixth) and Hanoosh Supraneni (started seventh) slotted into 4th and 5th position. Jeffrey continued to pull away at the front and was unbeatable as he crossed the finish line in first place.

“It was a great race with my sister and I am happy to have come out in front. Going into the first corner we were side-by-side but I managed to stay ahead. After that I kept pushing lap after lap and managed to build a good lead. I am very happy to win again as I love driving on this circuit”, said Jeffrey Kruger, the South African driver.

Prithviraj Siddappa, Head of Motorsports, said, “The final round of the Volkswagen Polo R Cup is definitely living up to its hype. It was a good battle between brother and sister and the result was just. Tomorrow’s races will be even more exciting with Rahil finishing ahead of Prashanth. Both will be fighting hard for the title, I’m hoping for healthy and hard competition”.

Earlier on the day Kruger was in sublime form as he dominated qualifying with a time of 2:27:322, a massive 1.626 seconds faster than second placed Karthik Tharani Singh. Karthik was not allowed to participate in Race 1 owing to an infringement of the Polo R Cup clause for drivers. This promoted Robyn Kruger and Rahil Noorani in second and third place respectively.

Race 1 of Round 4 result (provisional):