Home News Tooltech and VIT Agree on Cooperation in India 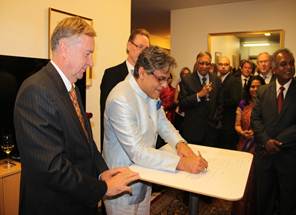 Tooltech Group, which promotes collaboration between Indian and European companies, has signed an agreement with VTT according to which Tooltech will work as the representative of VTT and its innovations in India.

The agreement was signed in Helsinki at the Indian Embassy in the presence of H. E. Aladiyan Manickam, the Indian Ambassador to Finland and Estonia. He thanked Tooltech’s significant contribution to “build the bridge between Finland and India for companies and research”. The company has already launched research projects with Universities of Turku and Oulu. The aim is to continue cooperation with the University of Helsinki. The ambassador stated that Dr Alexander Stubb, the Foreign Trade Minister of Finland, is currently visiting India. VTT’s experts are also part of Minister’s delegation in India.

Atul Khanna, from Tooltech, said that patience is needed both in India and Finland when starting new initiatives. Tooltech is not a conventional outsourcing vendor but combines Finnish and Indian strengths in a way that creates jobs in both countries, while commercializing innovations and opening access to giant markets. Board members from India, Rohit Watsa and Ravi Sonalkar were also present.

On behalf of VTT the agreement was signed by Professor Jouko Suokas, Executive Vice President Business Solutions and Professor Kari Larjava, Executive Vice President R&D. Prof. Suokas says: “Tooltech has been established in Finland for ten years. We find them a competent, systematic, professional and friendly partner. Tooltech is innovative and very well connected, a perfect representative of VTT.”