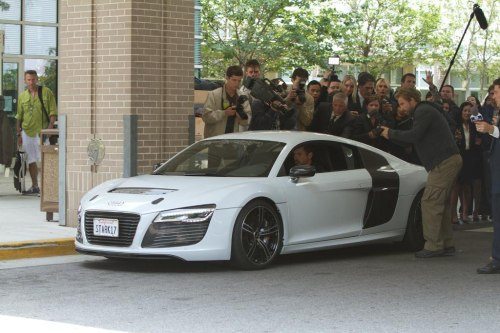 Audi has again joined forces with Disney and Marvel Studios for the release of Marvel’s Iron Man 3 due in theaters on May 3, 2013. The brand will once again be highlighted throughout the entire film. The Audi R8, R8 Spyder, A8, S5, and Q7 were all featured in the first and second installments.

“Audi is excited to once again showcase the brand’s cutting edge technology and sleek design with the Audi R8 e-tron in Marvel’s Iron Man 3,” said Loren Angelo, General Manager of Brand Marketing for Audi of America. “This is a strategic collaboration for us. Similar to the position of the R8 as an innovation leader, Iron Man’s character consistently evolves throughout the trilogy as he masterminds new trends in technology and engineering.”

Robert Downey Jr. will reprise his role as Tony Stark, the title character in the film, whose Super Hero alter ego Iron Man is the result of an extremely versatile and indestructible high-tech armor suit. Whenever Stark hangs up his suit, the technically-adept billionaire can be seen in the film behind the wheel of the all-electric Audi R8 e-tron sports car prototype. Gwyneth Paltrow also returns as Virginia “Pepper” Potts, CEO of Stark Industries and girlfriend of Tony Stark, who drives an Audi S7 Sportback.