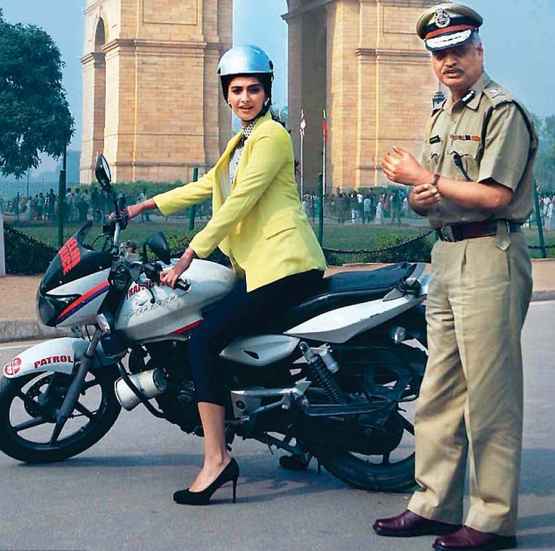 Delhi traffic police and Bollywood actress Sonam Kapoor have come together to promote the usage of helmets by woman riders.

Seen here in pic is Sonam wearing a helmet and posing with a Delhi police Bajaj Pulsar; with India Gate in the back drop.

The actress also interacted with many women road users to tell them the benefits of using a helmet.

The recent death of Santosh (35) and Neeta (24), who were killed in a road accident, has stimulated the actress and Delhi police to join hands. Both the sisters were not wearing helmets at the time of mishap.

Speaking to the media, Satyendra Garg said, Joint Comissioner of Police (traffic), said, “While the exact cause of the accident and who was at fault is still being investigated, the fact remains that the man riding the motorcycle was wearing a helmet and hence escaped unhurt. Should we not learn from this?”

We really appreciate Sonam and Delhi police coming together to promote the usage of helmets. We have always felt that a good helmet is a vital part of two wheeler riding.

The only thing that might raise an eye-brow here- High heels and Motorcycle Riding? Eh?