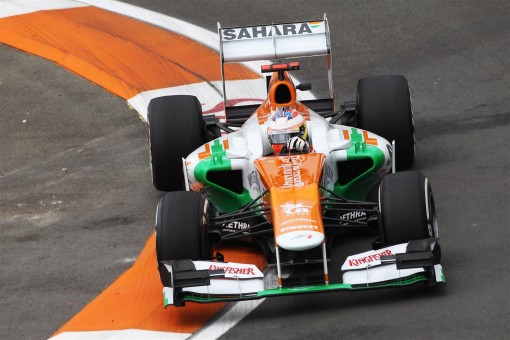 P5        Nico Hulkenberg (VJM05/03)
Tyre strategy: Used softs, new medium, new medium
Nico: “A great result for everyone in the team today and for me personally. Fifth place is a great achievement after a very long and difficult race. The two-stop strategy worked well, but the last stint was very long and it was hard to hold off the cars behind me on fresher tyres in the last few laps. So the race was a bit messy at times, but very entertaining and it feels great to come through and score such a good result for the team. We got a bit lucky with some cars dropping out, but we were in the right place to capitalise on things so I’m very happy about today.”
P7        Paul Di Resta (VJM05/02)
Tyre strategy: Used softs, new medium
Paul: “We went very aggressive by only stopping once and in fact we were the only car to pull off this strategy. Of course, when you’re stopping once you really don’t want a safety car period and it certainly hurt my race and cost me some track position. But with the way the race unfolded we can’t be too disappointed to finish seventh and it’s great to have another two-car points finish. On the whole our relative pace through the race was strong, but it was hard to keep the tyre performance towards the end and I was really fighting the car in the closing laps. There was some attrition ahead of us, but we were there to pick up the points when it mattered.”
Dr Vijay Mallya, Team Principal & Managing Director
“A thoroughly enjoyable race today and I’m delighted to see our cars come home in fifth and seventh places, our strongest result of the season and Nico’s best finish in Formula One. It was a rollercoaster race with many twists and turns, but I feel we have come away with the points we deserved given our performance level this weekend. Both drivers pushed hard, kept out of trouble and made their different strategies work. Paul recovered the ground he lost under the safety car and Nico had to drive most of the race without KERS, so it was an excellent performance by him. The result today sets us up perfectly for Silverstone in two weeks’ time where we will be determined to build on this momentum in our local race.”
News
,
Comments
Leave a Reply Cancel reply