Home News Render : Is this How the Volkswagen Vento Facelift Would Look Like ?

Volkswagen recently gave a facelift to the Polo hatchback for our market. The company is also prepping up to launch the facelifted Vento sedan here. Here on this page we have a digital render of the upcoming Volkswagen Vento facelift. 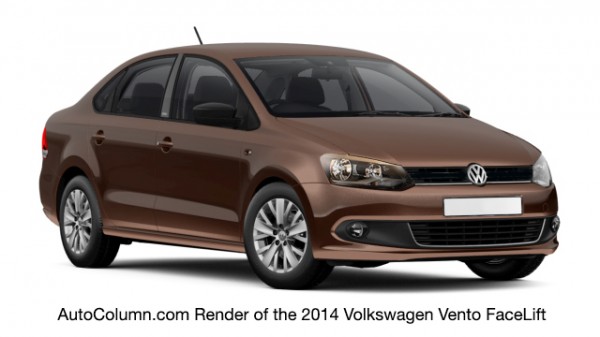 As already reported by us, Volkswagen will be launching a diesel automatic Vento with the facelift. The Vento automatic diesel details are :

The manual Vento diesel will also get the same mill in the same state of tune. Petrol variant will have the 1.2 liter TSI motor mated to the 7 speed DSG.

On the front, the facelifted model is expected to get a revised bumper on the lines of the Polo facelift. The interior will also be similar to its sibling and will boast of additional equipment when compared to the outgoing model.

Stay tuned to Motoroids for more dope on the Volkswagen Vento facelift India launch and other details.