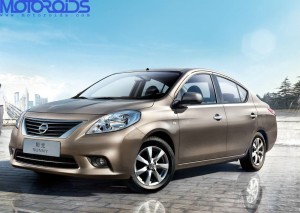 UPDATE 2: Nissan Motor Co. Ltd. has unveiled the new Global Sedan model (the V platform sedan, known to us as the Sunny till now) at the 8th China (Guangzhou) International Automobile Exhibition. The name Sunny, however will be used only for the Chinese market for now. The car, which is the second product spawning out of Nissan’s versatile V platform will be first introduced in China in January 2011, and will later go to 170 countries, of which Indian is also going to be one of the most important markets.

The new sedan is slated to arrive to the Indian shores in the second half of the year 2011. The car will be manufactured at Nissan’s Oragadam, near Chennai.
The brand ‘Sunny’ has been there in the Chinese market since 2003 and was an important model to come out from Chinese Dongfeng and Japanese Nissan partnership. The car has been appreciated for its cabin space and driving performance.

The new car is powered by Nissan 1.5-liter HR15DE engine with dual injectors and a new-generation Xtronic CVT with an auxiliary transmission, both of which are newly introduced in China. (power, torque, fuel efficiency and other details coming in the next update)

MacPherson struts are used for the front suspension and a torsion beam for the rear suspension, making for sporty and agile driving at low speeds, and steady and stable driving at higher speeds.

The Sunny sedan for China will bear a different name, and probably a different engine configuration for the India market, the details for which will be revealed at a later date.

Mr. Kiminobu Tokuyama, Managing Director & CEO, Nissan Motor India Pvt. Ltd. (NMIPL) said, “Following the success of our first locally made car –the Nissan Micra, we are happy to reveal the first visuals of the second car to be produced in India. We are confident that the “New Global Sedan”, which is also based on the versatile ‘V’ platform, will delight the discerning Indian customers. The model will be launched in India in the second half of 2011.”

UPDATE 1 : Nissan has just unveiled its V platform sedan, known as Sunny in the news reports and scoops till now. It’s going to be launched in India sooner than you think. More information on the development coming too, again, sooner than you think. In the meantime, have a look at this new car for the burgeoning entry level sedan market in India, and let us know what you think of its design. Also, what do you think should be the ideal price for it… stay tuned, as we prepare more updates