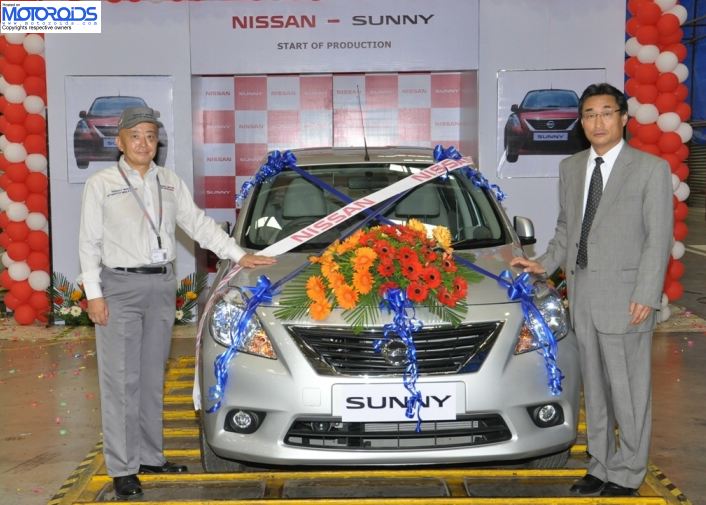 Only a few moments ago we told you about Nissan’s Sunny sedan website going online. Now we have received an official press release from Nissan Motor India Pvt. Ltd stating that the company has officially begun the production of the sedan in India. Nissan Sunny would be the company’s second ‘made in India’ car to roll out from Nissan Oragadam plant near Chennai.

Nissan India unveiled the Sunny on August 3, 2011 and is planning to launch the car in the coming festive season. Nissan has localized the Sunny edan highly, with upto 85% of localized components. Interestingly, about 40% of the components are sourced from Chennai itself.

The sunny sedan will be powered by 1.5 liter petrol and diesel engines. The petrol engine would be 1498cc unit with variable valve timing with peak power of about 110PS at 6000 rpm and torque at about 145Nm. The diesel engine will produce 106PS of power at 4000 rpm and 240 Nm of peak torque at 2000 rpm, if it’s in the same state of tune as the Fluence.

You can read our previous post for more information on the new Nissan Sunny sedan here.

Commenting on the achievement, Mr. Kiminobu Tokuyama, Managing Director and CEO, NMIPL. said, “Start of production of Nissan SUNNY is another significant milestone for Nissan in India. We wanted the mid-size sedan to be available during the upcoming festival season and we successfully accelerated our work program to make that schedule. Nissan SUNNY will help to leverage our position as one of the key players in the Indian market”.

Speaking on the occasion, Mr. Kou Kimura, CEO and MD, Renault Nissan Alliance India Pvt Ltd (RNAIPL) said, “Today’s start of production of SUNNY reinstates Nissan’s commitment to India and is the second of many other local products to come. It highlights the high-performance level of our state of the art plant, which is producing its second model in less than 15 months”.