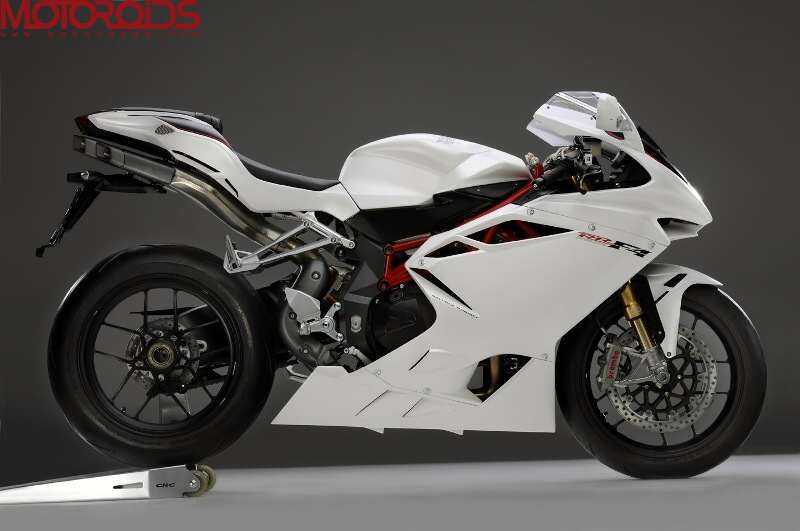 A few days back we showed you the teaser video of MV Agusta’s new top of the line, flagship 201bhp 2012 F4RR bike. Now the company has officially taken the wraps off the bike. The new liter class superbike comes at a time when the action on the superbike scene seems to have dwindled. This would easily make the F4RR one of the most talked about superbikes for some time to come. This would also include stealing some of the thunder from Ducati’s new superbike which is due in November.

The 998cc, 201 bhp bike will be priced at £17,999 or Rs 13.16 lakh. The stupendous power of the F4RR is not a result of capacity increase, the feat has been achieved by employing a shorter stroke engine with lighter and bigger titanium valves. However, the 15bhp increase in power over the more sober F41000R is utilized entirely to aid the acceleration of this new bike. The gear ratios have been selected such that there is no increase in the top speed, only crazier, wilder acceleration. Another changes to the engine of the new crown jewel SBK from MV Agusta include ‘Aerospace RR alloy’ forged pistons.

Apart from the engine, the new bike is aided by a revised exhaust for even better performance. On the roadholding and handling front, the new equipment includes Ohlins TTX36 shock absorbers, new set of forged alloy wheels, Brembo radial master cylinders and a choice of customized paint schemes.