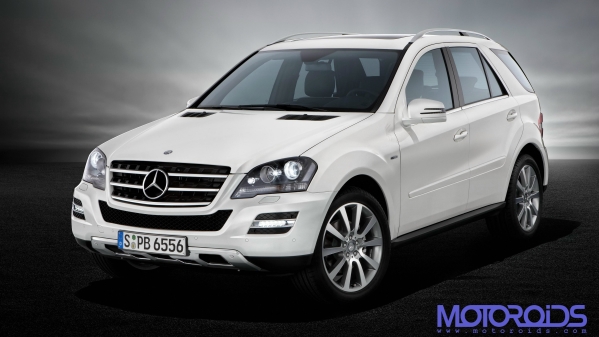 Mercedes-Benz has made some changes to the standard M-class to make the Grand edfitions distinctive. In the Grand avatar, the M-class now looks a tad more sporty and aggressive power. The front end now has slightly resdesigned darkened headlamps and LED daytime driving lights integrated with the front bumper. There are now 19” alloys done in a 10-spoke design.

From the inside, the vehicle now gets new better quality materials with a better visual and touch appeal. The two-tone colour scheme of the interior too is new and adds some more penchant to the classy interior of thiSUV. The steering wheel too, on the Grand edition is a special AMG ergonomic sports unit. A Grand edition badge on the central console completes the look. The spare wheel for the car is now placed in the boot. Mercedes-Benz expects the M-class to appeal to a wider spectrum of SUV fans with the new variant.

“The M-Class has been a popular model series in India. The “Sports Edition” and the “Executive Edition” are very aggressively priced considering the loadings and features of this marquee. We are confident that customers who expect highest standards from their vehicles will find the M-Class a vehicle that exceeds their expectations- both on and off the road.” stated Dr. Wilfried Aulbur, Managing Director and CEO of Mercedes-Benz India.